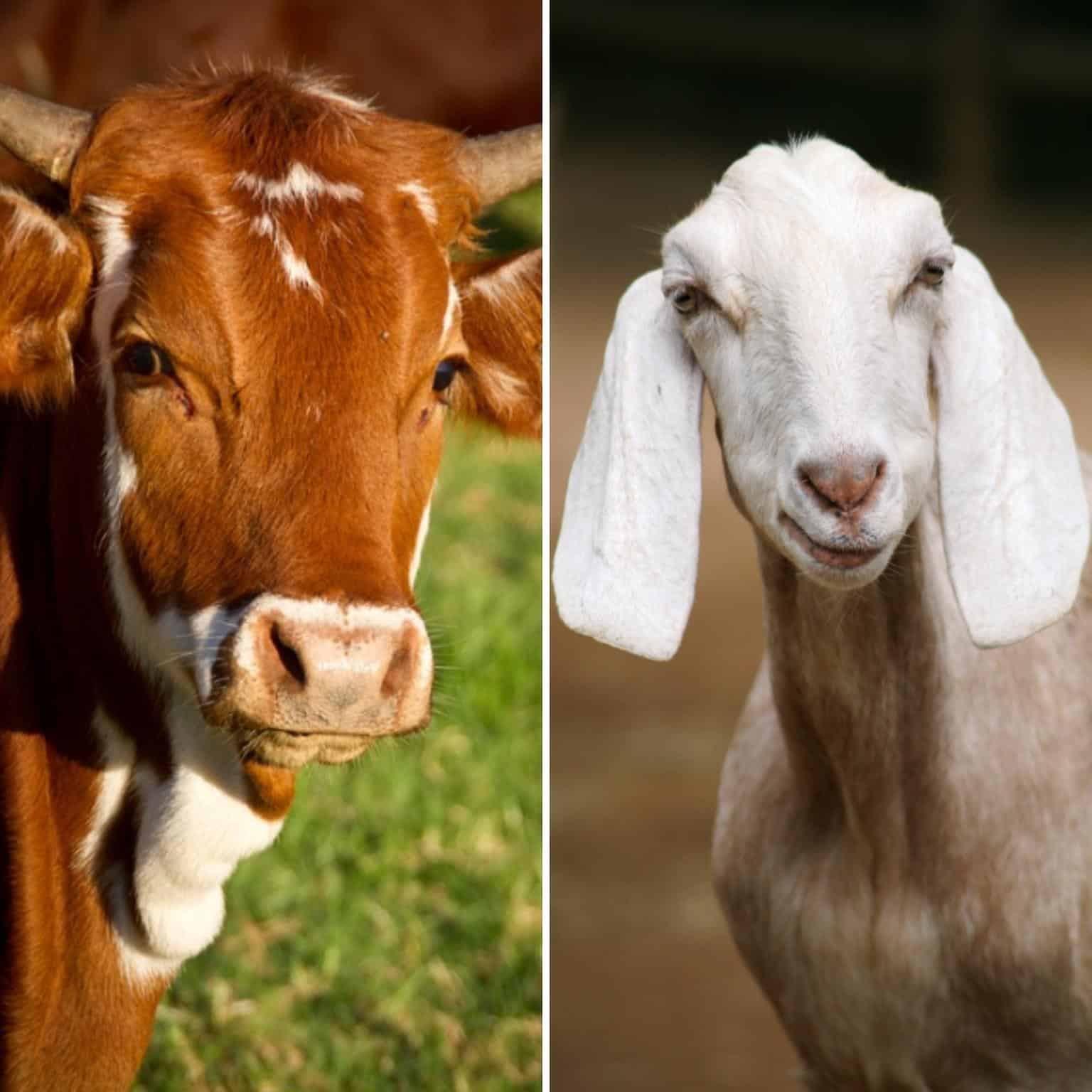 Both goats and cows are popular features on many homesteads across the globe. Bred for meat and dairy, both have value.

While goats take up less space, they are much harder to contain than cows. Cows produce a larger meat yield than goats, and their milk tastes better. Goats are easier to handle than cows and cheaper to buy and raise.

Of course, personal preference also plays a large role in deciding which is better suited to your needs.

To help you decide, this article will help you understand the pros and cons of raising goats and raising cows.

Which is Easier to Handle, a Cow or a Goat?

You don’t have to be Einstein to figure out that in a confrontational situation an argument with a goat will be infinitely less painful than with a cow.

I’m not saying that being head-butted or run over by a goat is not going to hurt, far from it, a goat can also hurt you (less than your ego anyway), but it probably won’t kill you.

Being able to handle your livestock is very important for day-to-day activities such as milking, vaccinations, health checks, moving from location to location, and breeding.

If you have young children, they are much less likely to feel intimidated by a goat than by a cow. Injuries sustained by a cow are going to be devastating for a child, they could even be life-threatening.

However, when up against a frisky goat, your child might get hurt, might get bruised, might feel shocked, and probably even a little scared. Their overall safety with a goat or herd of goats is far higher than with a cow or herd of cows.

If you are planning for a dairy animal, please remember that it is easier to train a goat for milking than it is to train a cow.

Cows kick and shift their weight, and can easily knock you over while you are trying to milk them. Goats do also kick, but they settle into a milking routine much faster than cows do.

If you are lucky enough to purchase a cow that has already been trained for milking and being handled, they can be absolutely delightful as companion animals and even pets.

If you need to move your cows or goats from one location to another, cows will be easier to herd. Once you get a few cows in front to start moving the others will quickly follow.

Goats are a whole other animal! Herding 5 goats can be like herding 30 children. They are easily distracted and will jump in trees, or jump over streams or fences.

If your cows do decide to go out on a road trip without your consent, they can also be hard to shepherd back into their fields where you want them. They tend to stay together and that makes them easier to manage.

Which is More Affordable, a Goat or a Cow?

The good layout for purchasing a goat or cow is significantly different. While goats can be purchased for $50 to $300, a cow can set you back for anywhere between $1000 and $3000.

Moving goats to show, purchase, or sell, move from home to home, or take them to an abattoir does not require specialized trailers or trucks. Because they are small it is easy to fit more goats onto a trailer than cows, and they can easily be transported in the back of a truck even.

Moving cows requires the use of a large heavy-duty trailer because of their size and weight.

A cow stanchion for milking and a chute for veterinary work both are more expensive because they have to be constructed with heavy-duty metal. Because of the cost, it is not practical if you only have a couple of cows.

Cows eat much more than goats and need at least one acre per cow. One acre is plenty for between 6 to 8 goats.

If you do not have enough acreage, you have to buy a large amount of hay to make up for the lack of grazing.

If you have a cow for dairy in your home, they will also need alfalfa to produce an adequate amount of good quality milk.

The size and the amount of fecal matter they produce, cows will need much more bedding than goat will.

Which is Better, Cow’s Milk or Goat’s Milk?

Because most people are raised with cow’s milk, suddenly switching to goat’s milk may be quite off-putting. However, just as is the case for cows, the taste of goat’s milk will depend largely on the type of food they are getting.

Obviously, a cow will provide significantly more milk than a goat will. It is also easier to separate the cream from cows’ milk than from goats’ milk meaning you’ll be able to make butter, cheese, and yogurt in larger quantities using cow’s milk.

The bad taste of goat’s milk can also be the result of harmless skin bacteria that ends up in the milk if the teats have not been properly cleaned before milking.

An unpleasant taste can also be the result of mineral deficiencies. This is also true for cow’s milk.

Proper hygiene, quality feed, a clean milking bucket, and preparation for milking will all affect the quality and taste of both cow’s milk and goat’s milk.

To prevent bacteria from entering your milk, first thoroughly clean your cow or goat’s teats, then squirt the first bit of milk onto the floor to remove any bacteria that remain on the tip of the teat, and then begin milking into your bucket.

The taste of goat’s milk can also be influenced by the presence of a buck that is in with the doe’s.

Bucks often urinate on the doe’s when breeding and rub their heads on the doe’s udder and across the rest of the doe’s body. This can spread bacteria and the urine can cause a significantly sour taste to the milk.

To make cheese you need milk, to make butter you need cream, to ‘make’ cream you need milk; the ability to separate out the cream from milk is often reliant on a process called homogenization.

Most store-bought cow’s milk has been both pasteurized and homogenized.

So, what is homogenization? Homogenization occurs when milk is passed through a high-pressure pump that makes fat molecules in the milk smaller.

Homogenizing milk helps prevent the separation process that occurs in whole milk. In other words, it stops the cream from rising to the top of your bottle of milk. Store bought milk is homogenized.

There are often differing points of view on whether goats’ milk is homogenized or not.

The reason for this is that goat’s milk is not put through the high-pressure pump to homogenize it. This is because goats’ milk is naturally homogenized.

Store bought milk is homogenized after the harvesting of most of its cream, this ensures the dairy farmer has a good supply of cream to sell, make yogurt, and make butter to sell.

Because goats’ milk is naturally homogenized, the cream doesn’t readily rise to the surface of the milk.

For the cream to rise, the milk will have to be left for three to four days so that the cream can separate.

The need to store the goat’s milk for this time is the reason why goat’s milk products are so expensive in stores.

If you’re farming or homesteading with your own cows for your household and to sell, your milk will be non-homogenized, in other words, the cream will rise to the top of the milk and be visible as a layer on top of the milk.

Homogenized milk will stay fresh for longer, will be easier to digest, will improve the taste and color, and make the milk more versatile for cooking and baking.

On the flip-side, because the fat cells have been broken down into such small particles these fat particles are easily absorbed into the bloodstream making them more likely to cause health issues, homogenization also reduces the nutritional value of milk.

The Difference Between Bulls and Bucks

Let’s start with the easy differentiation for the sake of newcomers into the homesteading world. A bull is a male member of the cattle species. A buck is a male goat.

If you are raising cows or goats for dairy, both would need to give birth and produce milk for their babies.

If you do not want to keep bulls or bucks, and you choose to go the artificial insemination route rather, you will need more equipment and the help of either a vet or someone who knows what they are doing to impregnate your cows or doe’s.

Many people choose to go with artificial insemination because it is easier than keeping a bull or a buck on their property.

In particular, bulls can be very testy and therefore very dangerous. A buck can also harm you, but you are likely going to be offended more by the smell than by the bruises left behind by a buck.

Raising Cattle or Goats for Meat

While beef is part of many western households’ food supply, goat meat is very popular in the Middle East, Mexico, and the Caribbean islands. Goat meat is very tasty and can be used – amongst other dishes – to make a really good curry.

Obviously, cattle that are bred for meat are significantly larger than goats. This means that you will need stronger hanging hooks, more heavy-duty equipment, and much more freezer space.

However, if you’re hoping to make a little extra money on the side, you will get more meat to sell from a cow than from a goat.

Deciding to raise goats or cows is very much a case of personal taste. While cows produce more milk than goats, goats’ milk has a higher nutritional value, is creamier, and stays fresh for longer.

Cows’ meat and milk are very popular in western countries. Statistics have shown that 65% of all meat consumed by humans is goat, not cattle. This is largely due to the space and feed needed to raise goats than cattle.

I love to hear about the goofy antics of goats. Please brighten everyone’s day by sharing the funny stories of your goats and cows in the comments below.

Di-Anne has been living on a farm her entire life. She has a gorgeous garden, and also tends to livestock big and small. She’s not raising her three children with the self-sufficient mindset.

"Hi! I'm Kendra. I'm a wife, mother, and homesteader. I love everything that has to do with simple living. I'm a canning instructor, an avid gardener, and a constant learner of old-fashioned skills. Here is where I share it all. Welcome to the adventure!"
How to Free-Range Your Livestock
So, Does Irish Spring Soap Repel Cats?
Leatherworking 101: Make Leather Products From a Cow Hide
Floating Egg Test: Does it Really Work?
Bantam Chickens: Everything You Need to Know