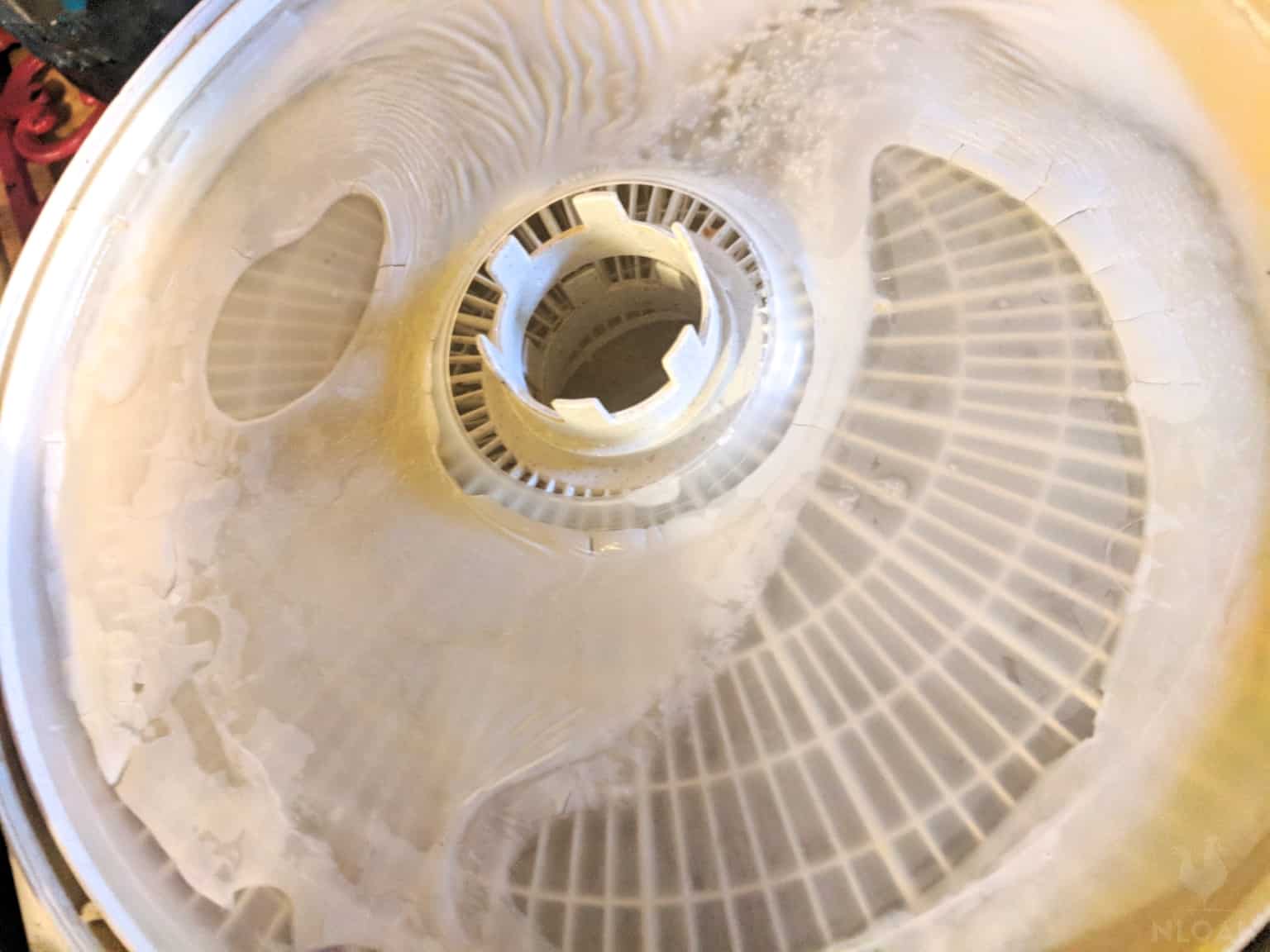 Get more milk than you can handle from your cows? Don’t let it go to waste, learn how to powder it yourself. This simple act of preserving milk often needlessly intimidates folks who have never seen it done before.

Powdering milk is yet another way to preserve the milk garnered on your homestead. It is equally simple to canning or freezing milk. Approximately 13 teaspoons of powdered milk will yield about 1 cup of reconstituted milk.

Powdering (or “drying”) your own milk will not only save you money, it will ensure the constant access to dairy products on the homestead even if your favorite milk cow or goat suddenly dies or potentially long-term disaster strikes.

Powdered milk does not taste quite as good as fresh milk, but it doesn’t taste bad either – and will still be free of the ills that can come from commercially pasteurized and processed milk.

Dried milk typically has a shelf life of about 20 years, making it one of the most shelf-stable food items you will be able to stockpile in your homesteading pantry.

The latter has smaller flakes than the former, making it easier to either blend or spoon mix. Instant powdered milk typically dissolves in water more easily and some folks believes has a better taste when simply drinking it out of a glass.

Regular non-fat powdered milk must be chilled in the refrigerator after it is reconstituted and before it is served.

When reconstituting regular non-fat powdered milk, you will probably have to use a whisk or put it in either your food processor or blender to mix it thoroughly enough for either drinking or baking.

The heat process used to powder milk should not be confused with pasteurization. Drying milk does not destroy the iron, vitamins, beneficial fiber, and minerals found in milk.

What you eliminate during the powdering process is excess moisture and fluid. No chemical, preservatives, or additives of any type of necessary when powdering milk.

Any type of milk can be powdered. Skim milk seems to be the easiest to powder because of its low level fat content.

It is recommended to strain or at least, home pasteurize milk before drying and not use raw milk in the powdering process.

I have known other homesteaders who just love raw milk, drink no other type of milk, and powder it without any problems.

But, when consuming raw milk, the risk of bacteria being present in the liquid does exist and can cause illness or death if consumed.

To powder milk, you can engage in the drum drying process, spray drying, or the freeze drying method.

This is often considered the simplest way to powder milk. It generally generates more particles than either of the other two powdered milk methods.

There is nothing wrong with either of the other two methods, as far as nutrient count and effort and energy used to complete the process, spray drying is merely often deemed the simplest and most effective method – because the end results has such longevity and takes up little space to store.

Proper drying and storage of powdered milk, and all other dried food stduffs, is crucial. Mold, bacteria, and fungus cannot grow in the absence of moisture.

The dehydrated milk must be 100 percent and thoroughly dry before being stored and MUST be kept in an airtight container – preferably vacuum sealed glass or plastic container.

Dried foods preserve really well because bacteria, fungus or mold cannot survive where there is no moisture. So, it is imperative that you ensure that all the moisture has been removed.

Consult the recipe to see what texture or consistency the final product should be. Let the pieces cool off because assessing their dryness.

After pouring the milk into the dehydrator trays, set your machine on the fruits and vegetables settings – or 135 degrees.

I recommend never using more than four trays in a standard residential dehydrator, no matter how many trays you have or machine capacity noted in the instruction manual.

The more trays you have, the longer anything will take to dehydrate, running up your electric bill in the process. I have found that it is actually less time-consuming to dehydrate four or fewer trays in two separate sessions, than to put too many trays on the machine at any single time. 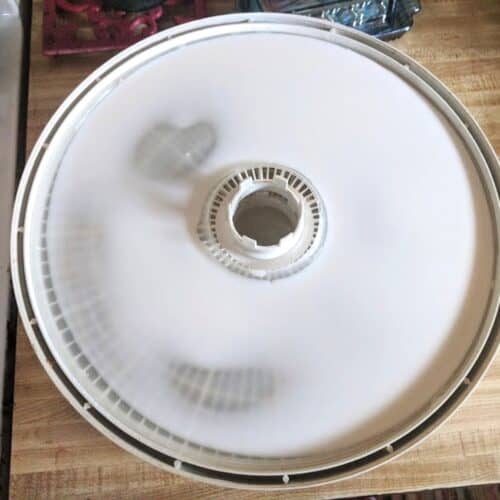 You will quickly learn if your kitchen counter is 100% level when pouring milk into a dehydrator tray.

You can tell by the spaces that show portions of the plastic tray liner, that my counter is not as level as I thought. Test the levelness of your counter by pouring a little bit of water in the tray first, to avoid spoiled milk.

If you cannot find a good level spot on your counter to dehydrate liquids, consider using an extension cord to connect the machine to an outlet and placing it on the kitchen table instead.

I would have gone this route, but far too often a dog of grandchild runs around the kitchen table, and not only spilled milk, but a broken dehydrator surely would have occurred.

Note: Solar dehydrating of milk is not possible. The milk would spoil long before the drying process would be complete – and foster the growth of bacteria.

The tray closest to the top of the dehydrator sometimes causes scorched milk, hence the yellow cast on the dehydrated milk in this tray:

There’s nothing wrong with the milk, it is still dehydrated and safe to use, it is just boasts an unattractive hue.

Because I routinely fill my dehydrator trays only halfway full with milk, the flakes are fine enough to crinkle in my hand to turn into a powder:

You can use your food processor or blender to grind the dehydrated milk into powder if the dried milk is too thick to crumble.

Once you have flakes that resembled manufactured powdered milk, simply put them in a Mason jar or vacuum sealed bag, and store until you are ready to use.

I use the attachment that came with the vacuum sealing machine to also seal the Mason jars as extra protection against moisture.

When reconstituting dried milk, you only need two ingredients:

A 2:1 two parts water and one part milk ratio should always be used as a rule of thumb, regardless of the type of milk or the chosen drying method.

However, some folks use different ratios, such as 1, 2 or 3 tablespoon of dried milk for every cup of water. definitely experiment to see what works best for you and the type of milk you used.

Add milk slowly, about 1 teaspoon at a time, to help ensure you don’t end up with far too watery of a milk product – and risk ruining your recipes.

So there you have it! It tastes just like regular milk. You can even add a dash of vanilla extract or powder into the mix for some extra flavor!

Reconstituted milk can be used pretty much anywhere you would use regular milk: in smoothies, baking, with your morning cereal, sauces, in puddings, soups, and anything else you can think of!

When using reconstituted powdered milk with cereal, add about 3 tablespoons for each ½ cup of either dry cereal or oatmeal – and the same amount of water.

Add up to ½ of a cup of reconstituted powdered milk or ¼ of a cup of powdered milk flakes per each 1 cup of water or regular milk used when making gravy, pasta sauces, pudding, broth, or custards to give them additional flavor and to help them thicken.

To infuse your coffee or tea with more calcium, substitute non-fat dry milk for your usual creamer.

For a more rich meatloaf, use 2/3 of a cup of powdered milk for ever pound of ground beef used in the recipe. The flakes also add a rich flavor to meatballs.

When making canned soup or casseroles, add up to ½ of a cup of powdered milk flakes to give them more flavor and a thicker texture.

To make bread, cookies, biscuits, pancakes, cakes, and muffins brown a little bit more quickly and become firmer, add up to ¼ of a cup of powdered milk flakes to the recipe.

Simply follow the baking instructions in your favorite pudding recipe (or the back of an instant pudding box).

To make hot chocolate, mix four tablespoons of the mixture with 1 cup of boiling water. For chocolate milk, place the hot mixture until the refrigerator until it chills.

What is powdered milk, anyway?

Powdered (or dry, or dehydrated) milk is simply pasteurized dehydrated milk with its water contents removed through evaporation. When reconstituted, water is added again, and the milk can be drank or used in recipes.

Can You Actually Dehydrate Breast Milk?

In case you were wondering, no you shouldn’t dehydrate breast milk at home due to the health hazards the process may pose.

7 thoughts on “How to Make Powdered Milk Step by Step”