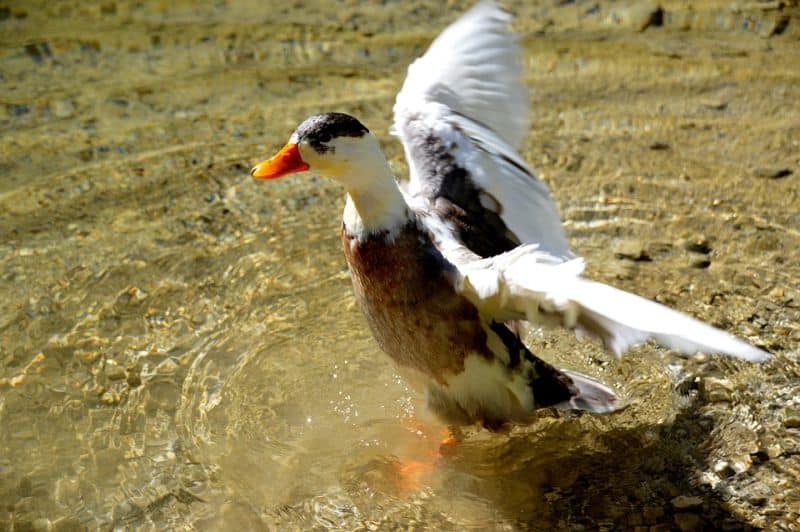 Magpie ducks are among the most beautiful and docile of all domesticated breeds. Even though Magpies are not as highly kept as some other well-known breeds, the keepers who breed them and collect their eggs are highly devoted to preserving these enigmatic poultry birds.

Ducks of this breed are multi-purpose birds. They are equally good at producing eggs and supplying meat for the dinner table.

Although Magpie meat is robustly flavorful, these ducks are often kept just for their eggs in the United States because of the incredible appeal as “farm pets” or pond “ornaments.”

Oliver Drake and M.C. Gower-Williams are credited with creating the Magpie duck breed in Wales during the 1800s. Magpies were the result of crossbreeding the Belgian Huttegem and Indian Runner ducks.

Magpie ducks were imported to America in 1977. Initially, the Black Magpie duck variety was accepted by poultry bird associations but in a few years the Blue Magpie variety was also accepted and breeding standards set.

Magpie ducks were first imported into America by Michigan farmer, Isaac Hunter, in 1963.

Magpie ducks are most definitely affable and become very friendly with their keepers – especially children.

Spending just a few moments in the presence of these little beauties makes it easy to see why they have endeared themselves to their keepers, and why it can be incredibly difficult to see them as meat birds and not egg producers and farm pets.

Magpie ducks are sometimes dubbed as being “needy” by folks who are not overt fans of the breed. It is true that they can rapidly imprint on anything around them, even chickens that they are sharing incubator space with during the hatching process.

I have discovered that Magpie ducks are far less likely to be startled and waddle off as rapidly as their webbed feet can take them as their Indian Runner duck ancestors.

However, I believe Magpie ducks are still more likely to enter a panicked state than Pekin, Khaki Campbell, or Rouen ducks.

Now, any Indian Runner duck keepers who are reading this might take offenses at that comment, so I apologize in advance. I am just not a big fan of that particular breed – I herald Pekin ducks above all others.

Magpies – like all other breeds of domesticated ducks, cannot really fly. The best these birds can do with their little wings and big bodies is to get roughly 12 inches off the ground and “fly” forward a couple of feet.

A Magpie duck hen is capable of laying between 220 to 300 each year, on average. Eggs produced by Magpie ducks are large grade, and come in shades of green and blue. The eggs weigh roughly 80 grams each.

Do not expect a Magpie duck hen to start laying eggs until she is at least 25 to 30 weeks of age. Usually, a Magpie hen will lay six eggs before she decides her clutch is complete, and starts to sit her eggs.

Duck eggs from this breed tend to hatch in slightly less time than most other breeds. It takes approximately 18 days for a fertilized Magpie egg to hatch.

In general, Magpie duck hens are much more diligent egg sitters than their Indian Runner ancestors or Pekin hens. But, if you want to make sure Magpie eggs hatch to either increase our flock numbers or as a part of a homestead side hustle breeding business, it is still wise to invest in an incubator.

While some Magpie hens could be prone to going broody and fighting you for the eggs she is sitting that you want to eat, this is not a very common behavior for the breed.

Hens from this breed are usually excellent duck mommas – even if they do not sit their eggs through the hatching stage. It can be quite beautiful to watch a good momma duck hen teach her little ones (or adopted little ones) how to forage and swim.

First time Magpie hen mommas might need a little bit of help learning the ropes. Sometimes, although it is rare, a momma can ignore or pull at the wings of ducklings because they startle her and bring about a change in the flock.

If you are concerned about a hen’s behavior or have an aggressive drake, I recommend putting a brooder inside of the duck house or coop run so all of the ducks and ducklings can get acquainted in a safe setting and turn the ducklings loose into the flock only after they have a little bit of size on them and can get into water and swim safely on their own – especially if you are raising light class breeds with larger ducks – like a Jumbo Pekin.

A duckling does not possess the oils that help its feathers to quickly dry until it is at the bare minimum, at least two weeks old.

An intuitive momma hen will know this and not allow the ducklings to free range or get in a water source until they are ready, but a first time momma hen that lacks the usual parenting skills may not monitor the ducklings well enough to prevent them from getting into water too early, which can result in severe health issue depending upon the seasonal temperature when they are hatched.

A Magpie duck can be harvested for meat, but you will only get enough off the bone to feed two adults – three if you are really lucky on the bird’s size. While their meat is not sought after by gourmet chefs around the globe like Pekin duck meat, it is tasty and not very greasy.

The light color of the underbelly of Magpie ducks does make it easy for keepers new to harvesting and butchering poultry birds, to clean all of the meat off the bone.

Ducks of this breed are fairly good foragers. When permitted to free range for at least part of the day you can expect these poultry birds to provide themselves with roughly one fourth of their daily dietary needs.

The more a duck can forage, the more natural diet they will consume – potentially making them healthier and reducing husbandry costs.

Magpie ducks may favor a waterfowl feed over traditional general purpose poultry bird feed, but such feed is not commonly kept at most agriculture supply stores – especially in rural areas. Ducks of this breed can safely consume all poultry bird feed except medicated chick feed.

Ducklings of any breed should never be given the medicated chick feed, only the non-medicated version. Game bird feed can give Magpie’s a nice protein boost during the winter months when foraged food will be more difficult to find.

Magpie ducks need the same basics that all duck breeds do: constant access to clean drinking water and clean water to swim in, poultry bird feed to supplement their foraging, clean and dry bedding, as well as duck house or coop and attached run that will protect them from both the elements and predators.

Take the time and spend the money to invest in a quality breeding pair that comes from a reputable breeder. The hen and drake that created your breeding pair should have a solid health record, and pleasant disposition to help insure your breeder inherited these same traits.

Look for a hen that has a record of at least average but more ideally above average, egg laying record. You should also investigate the hatching success rate of the line the breeder birds come from and their own record of live hatch percentages if they are not maturing juveniles.

The size of the eggs laid by a hen as well as her laying habits may be part of a genetic makeup that actually comes from the mating drake.

Picking a drake as a breeder bird should involve, whenever possible, choosing one that was hatched from a momma hen that had a stellar egg laying and hatching, as well as quality egg size, record.

Ideally, you should have a ratio of five mature Magpie hens for every one drake when starting a breeding plan. While Magpie drakes do not have the same amped up libido as Welsh Harlequin drakes, they do come in a close second in the amorous vigor department.

If you are searching for a beautiful and friendly duck that will interact well with our family when free ranging and produce ample and delicious eggs, the Magpie breed might be an excellent choice.

I have never had any problem keeping ducks of mixed breeds together or keeping ducks with chickens, but some other keepers have not had some amicable living when intermingling multiple types of poultry birds.

When introducing Magpies into an existing flock, I would still recommend introducing the birds slowly – whether you are adding them to a flock that includes just other breeds of mature ducks, or a flock that also includes chickens.

This duck breed can be a little high strung and excitable during a transition phase, and you don’t want that anxiety to spread to the rest of the flock or remain a part of the Magpie’s overall personality after the introduction to the flock period has passed.