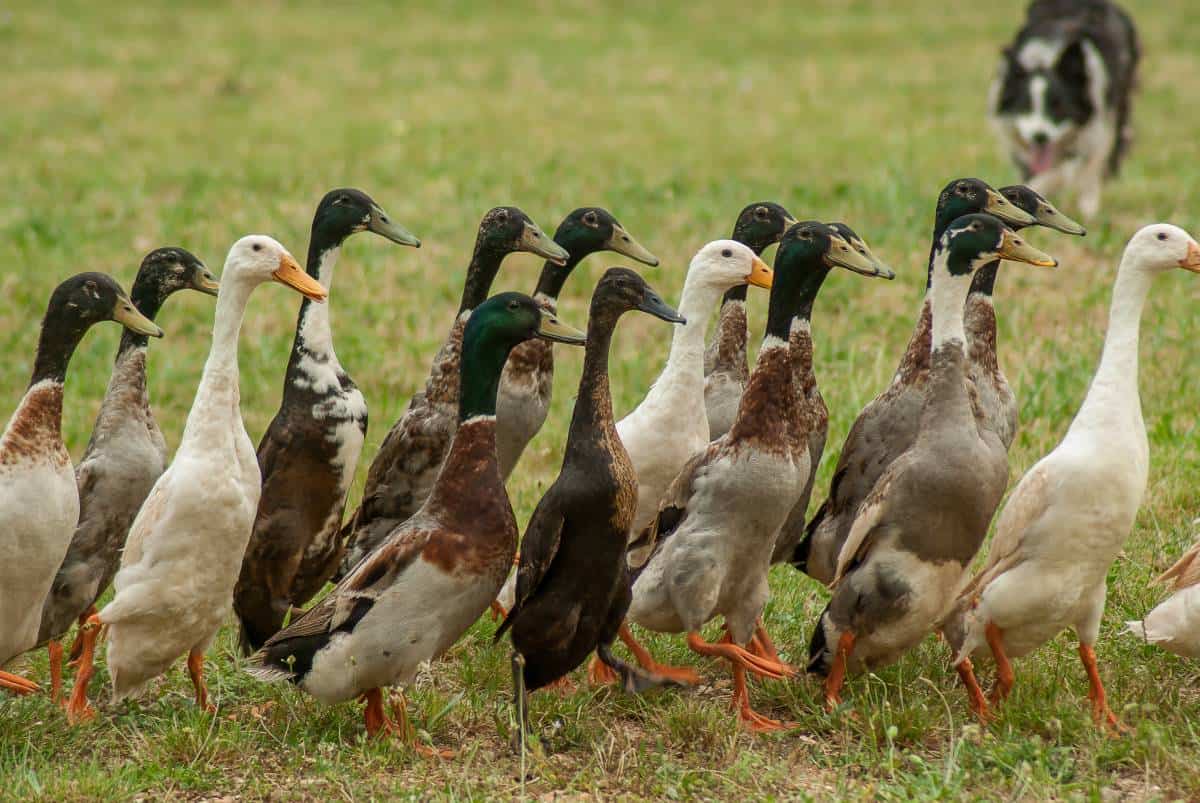 Indian Runner ducks are perhaps the easiest of all breeds to identify due to their unusual body style. Watching these attractive poultry birds run about while free ranging can be quite entertaining.

They look like colorful penguins rushing around the barnyard. In fact, when members of this duck breed were first imported to America they were dubbed “Penguin Ducks.”

Ducks of this breed may look like the waterfowl equivalent of bowling pins with plumage, but they are actually excellent egg layers, and can even be bred and kept as meat ducks.

Indian Runners do not fly any better or worse than other domesticated duck breeds. The small and short wings and heavy bodies allow domesticated ducks to lift just a few inches or so off the ground, and do a mock flying motion to propel themselves forward maybe one foot before thudding unceremoniously back down to the ground.

Members of this unique duck breed typically for 8 to 12 years when kept in sanitary and safe living conditions. In the wild, Indian Runner ducks never achieve such longevity and often perish in just 24 months.

This duck breed has been around for at least 2,000 years. Drawings or carvings of Indian Runner ducks have been found on ancient temples in the Javan region of Indochina. Flocks of this duck breed were also common in both Bali and India.

Duck herders would drive an Indian Runner flock of 1,000 on a long march to get them to market. The ducks would have to forage as they walked sometimes rugged trails to find food. Rice fields were among their favorite sources of sustenance.

As the Indian Runner flock was herded to market, the duck herders would also collect all of the eggs they dropped to both eat along the way, and to sell upon their arrival. The trek to a village market could take as long as six months when the Indian Runner duck keepers lived in a remote area.

While some to many Indian Runner ducks perished along the way, those that did make it to market and become breeders in a new flock helped to foster this breed as one of the most disease resistant and hardy.

Indian Runner ducks are often crossbred with other breeds to help infuse their hardiness and attractive feathering into a flock. These ducks went nearly distinct (especially in Western Europe) during the 16th Century due to extensive crossbreeding.

They were also used in crossbreeding efforts to create both the Khaki Campbell and Buff Orpington duck breeds.

This domesticated duck breed is classified as being light class. It is uncommon to raise Indian Runners as meat birds commercially because they do not put on weight rapidly like Pekin or Buff Orpington ducks – nor do they get as large. But, residential keepers can surely harvest ducks of this breed for their dinner plates.

I would compare the taste of meat produced by Indian Runner ducks to that of wild duck – it is quite flavorful and not very greasy. These ducks produce little fat. A mature Indian Runner duck, be it a drake or a hen, should offer enough meat to feed up to two adults.

Indian Runner ducks will forage, but only close to their duck house or coop and run. Unlike their ancestors who wandered far with just a little work by their herders, modern flocks prefer to remain close to familiar spaces unless directed elsewhere.

Expect ducks of this breed to only find up to one third of their daily dietary needs through foraging – unless you use a chicken tractor to relocate them to specific areas to find more insects and wild greens after the ones near their living quarters have been eliminated.

Members of this duck breed can be kept entirely in a coop and run environment, but it will have to be a spacious one. Even though they do not ever roam far unless forced to, they prefer the freedom of movement to caged life.

Provide a minimum of four square feet per Indian Runner duck if they will always or primarily be kept in a coop and run.

Even though their cylindrical shaped bodies might not indicate Indian Runner ducks are avid or graceful swimmers, they truly are. When allowed, ducks of this breed prefer to spend at least half of their time in water.

A pond or plastic baby pool will need to be placed where the flock has constant access to them to avoid stress and ample vocalized displeasure from these poultry birds.

Indian Runners are a substantially hardy breed. They adapt quite well to both cold and hot climates.

These ducks seem more bothered by some other duck breeds. Worms can be the most common parasitic problem for members of this duck breed.

Indian Runner juvenile and mature ducks should be wormed after purchasing if you cannot verify it has already been completed by the seller. Worming the flock members every three weeks for the first two months of keeping and again once every six months is highly recommended.

It is also a good idea to dust the head of the ducks about once a month to better protect them from mites. You can purchase the poultry bird dusting material from an agricultural supply store like Rural King or Tractor Supply.

I prefer to make my own natural dusting material and herb balls to protect all of my poultry flocks from mites and worms:

It can take a little while for Indian Runner ducks to warm up to both new surroundings and their keepers. It is not unusual for ducks of this breed to be labeled either “high strung” or even shy by new keepers. After the ducks become comfortable, or with increased handling at the duckling stage, Indian Runners become fairly affable and sociable.

The highly excitable state an Indian Runner duck can work itself into often cause them to jump – even as ducklings who are nestled inside of an incubator after hatching. I highly recommend having an extra person stand at the ready to catch jumping ducklings when opening the incubator lid.

A reaching human hand – no matter how slowly and gently it is extended, can flip a duckling out to the point where it jumps from the incubator onto the table where it proceeds to run around – or even straight onto the floor.

I would easily compare Indian Runner ducks to guinea fowl when detailing their startle response during free range time. Expect the entire flock to loudly bolt in many directions when they encounter something that startles them. Thankfully, it takes only a few moments for the ducks to calm themselves back down, once they realize the sky is not actually falling.

Indian Runner ducks are at their best and in my opinion healthiest, when raised in a space large enough to allow them free ranging space outside of their coop and run. They will not wander far, as already noted, so a large backyard can suffice.

Members of this breed are very fun to watch running about and playing in the water. They lay rich and creamy eggs for many years, making them a great value for the money paid to purchase either ducklings or breeders.

Because Indian Runner ducks are not as common as Pekins, Rouens, or Khaki Campbell breeds, they will likely need to be ordered from a hatchery or purchased directly from a professional breeder and not the local agricultural supply store.

No, Indian Runner ducks don’t fly. They can get a few inches off the ground at best.

What colors can Indian Runner ducks have?

Indian Runner ducks come in a variety of colors such as brown (light or brown), black, blue, or green.

"Hi! I'm Kendra. I'm a wife, mother, and homesteader. I love everything that has to do with simple living. I'm a canning instructor, an avid gardener, and a constant learner of old-fashioned skills. Here is where I share it all. Welcome to the adventure!"
Duck Language: How to Interpret Duck Behavior
How to Incubate and Hatch Duck Eggs
Pekin Duck Breed Guide - Start Here
The 12 Best Egg Laying Duck Breeds
Welsh Harlequin Duck Breed Guide - Start Here