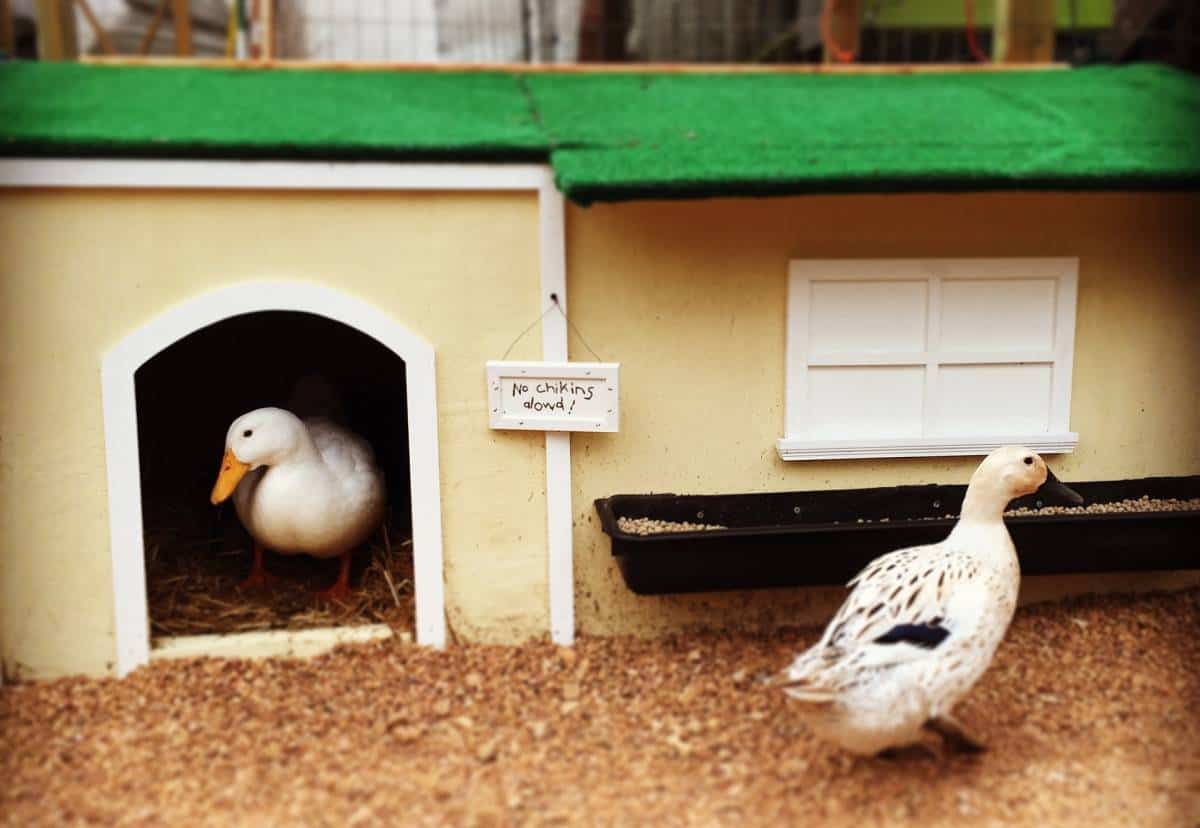 Welsh Harlequin ducks are a relatively new breed when compared with those top meat and egg duck varieties that have been around for centuries. Their newness to the marketplace, and somewhat difficult to find nature has not hampered the ability of Welsh Harlequins to become an incredibly popular breed.

Members of this duck breed are primarily raised for their egg and not meat production, because of their size. Due to their smaller size, there is not enough meat on the bone of a Welsh Harlequin for breeders to consider them a viable money maker.

However, the meat is quite tasty. Some homesteaders and farmers do butcher a few Welsh Harlequins for the cook pot because they populate the flock so quickly. Welsh Harlequin meat is flavorful, lean, and is not very greasy.

One of the many attributes of this duck breed is the rapid procreating abilities of hens and roosters. Drakes are so amorous that you only need one to service an entire flock of 10 to 12 hens.

Possessing too many drakes can actually harm a flock because hens become overly taxed, causing potentially lethal damage to their reproductive systems.

Welsh Harlequins were created quite by accident. Welsh duck breeder Leslie Bonnet discovered and fostered this breed in 1949. Bonnet, a British Royal Air Force officer, banker, publicist, and scholar, noticed a unique and beautiful genetic “mishap” in a batch of Khaki Campbell ducklings that caused them to be incredibly light in color.

In the book, Bonnet staunchly maintained that Welsh Harlequins were cultivated to create a standard line of egg layers that could out produce Khaki Campbells. He also wanted to develop an incredibly docile and calm duck breed.

On average, Welsh Harlequin hens can lay 300 eggs per year, and do so without any substantial interruption over the cold weather months, when proper husbandry habits are followed. He succeeded on both counts.

In 1968, Welsh Harlequin ducks that descended from the original chicks once they became breeders themselves, were living in just two small blocks. The breed gene pool had to become vastly diversified in order to grow and thrive.

It was not until the 1970s that Welsh Harlequin ducks finally had consistently growing and stable population numbers. In 2001, the light silver feathering of Welsh Harlequins was set as the acceptable breed standard by the American Poultry Association.

You can expect to garner between 255 and 300 exceptionally creamy large white eggs from Welsh Harlequin ducks annually. This breed is highly prone to laying even during the winter – as long as the coop or duck house includes safe light fixtures.

A solar powered “coop light” or two inside of the duck house will help the Welsh Harlequin hens be exposed to the minimum of 10 hours per day they require to prompt solid egg production.

Purchasing ducks as ducklings and only from a reputable breeder is always highly encouraged no matter what breed you are purchasing.

Several common and popular breeds, such as the Pekin and Khaki Campbell can readily be found during twice annual “Chick Days” events at Rural King and Tractor Supply, but more unique breeds like the Welsh Harlequin duck, are rarely available at agricultural retail stores.

The Welsh Harlequin tips below should help guide you to reviewing not just ducklings, but juvenile and mature birds offered for sale by breeders, at poultry bird shows, and livestock auctions.

Never attempt to sex a duckling or older duck using the vent check method unles you have been properly trained.

Apply even just a little too much pressure or pressure on the wrong part of the body can not only severely damage the duck’s sex organs, but cause potentially deadly damage to internal organs.

Only use the vent checking method to sex a duck if you have been trained to do so by a veterinarian, or a quality experienced breeder – if at all.

Welsh Harlequin ducklings have differing bill color after hatching, as noted above. Look for the pink tip on the bill to determine if the bird is a male or female.

The pink shade is light or faint and some newbie keepers mistake it for a tan or salmon colored tip. Typically, you can determine sex on a new duckling with at least 75 percent accuracy using the bill color check method.

Keeping ducks of this breed will provide the family with ample eggs and a friendly new addition to any backyard flock or homestead.

Welsh Harlequin ducks are affable not only with their human keepers, but also when kept with ducks of other breeds, chickens, and guineas – in my personal experience.

Because it will take a little extra effort to find these ducks, such as ordering them from a hatchery and having them delivered, you may want to separate them from ducks of other breeds to keep the drakes and their high libidos from procreating with all of the hens sharing the same living quarters.

"Hi! I'm Kendra. I'm a wife, mother, and homesteader. I love everything that has to do with simple living. I'm a canning instructor, an avid gardener, and a constant learner of old-fashioned skills. Here is where I share it all. Welcome to the adventure!"
What You Can and Cannot Feed Ducks
The 12 Best Egg Laying Duck Breeds
Homemade Duck Feed: How to Grow Your Own
Indian Runner Duck Breed Guide - Start Here
Magpie Duck Breed Guide - Start Here