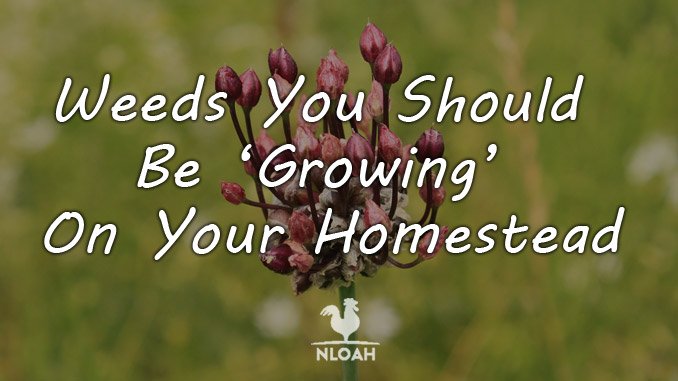 Weeds are good. Yep, you just read that right, weeds actually do have a purpose… at least some of them, anyway.

In an era when biotech industry giants (I typically use a lot harsher term for those guys and their peers) are constantly toiling away in laboratories figuring out how to kill weeds, I am seriously telling you, urging you in fact, not to go pulling all the weeds in your garden.

The war on weeds must come to an end, fellow homesteaders. Mother Nature does not allow plants to grow in a vacuum. The growth of any weed is simply nature’s way of using soil that has been depleted of all or most of its nutrient-rich soil, and replacing it.

After a wildfire or the clear-cutting of an area, what is the first thing you see pop back up on the land? Weeds!

The tenacious and strong wild “plants” actually enhance the soil and help churn it into ground that is suitable for growing – while breaking up dirt that is too compact to permit crops to grow.

The permeation of hard ground by weeds also permits the water to better absorb into the ground. Weeds are not takers, as has long been assumed, they are givers!

“Weeds are pioneer plants,” according to a friend of minee. “They will die off and create mulch for succession plants.”

It is along the edges of the woods where weeds most often appear and thrive.

When the natural order of things is not disturbed by man (or woman) medicinal herbs, small plants followed by larger ones, an then wild berry bushes, followed ultimately by pine trees, oak trees, and fruit trees, grow from where pastures meet the forest and beyond, deeper into densely wooded areas.

Berries and other foraging material existed long before modern day farmers, gardeners, and homesteaders pulled weeds or used commercially manufactured pesticides and herbicides in their gardens.

If weeds were truly evil, permaculture would be a myth and those delicious wild blackberries you plucked off a vine and enjoyed all summer, would have become extinct centuries ago.

Weeds protect, fertilize, and condition soil, it’s as simple as that, folks.

Broad leaf plantain was brought by European colonists to America and used to condition hard soil. This useful weed possesses many nutrients, including magnesium, iron, calcium, silicon, and sulfur.

If the growth of plantain in your garden gets so thick the crops cannot get adequate sunlight, pull the weed and mix it in with your mulch or place leaves on top of the ground around plants, and allow them to naturally decompose and infuse the soil beneath with their nutrients.

This handy and hardy weeks also boast a plethora of medicinal properties.

Plantain has been used to aid individuals with digestive disorders, ulcers, heartburn, and topically to help alleviate skin rashes and soothe the pain from minor wounds – while enhancing the healing process.

Some Native American tribes ate and also used plantain topically to treat snake bite victims because of its antibacterial and anti-inflammatory properties.

This weed is also a common ingredients in many natural tinctures and healing ointments. Plantain can be yanked from the ground, and eaten raw or used as the basis for salad after it is washed.

Onions and garlic are closely related to crow garlic. The weed is a beneficial garden inhabitant because of how extremely well it deters slugs, cabbage worms, carrot flies, and various aphids.

Crow garlic is also heralded for its antioxidant properties that may help prevent or aid sufferers of peroxynitrite-induced diseases.

Butterflies love milkweed, honeybees tend to like it too, but those are not the only reasons to allow this weed to grow around the homestead. Native Americans used milkweed to treat a whole host of physical ailments, as do tens of thousands of naturists still do today.

The weed has often been used to treat bronchitis, bladder problems, ringworm, scrofula, water retention issues, edema, arthritis, and an array of digestive problems. The ingestion of milkweed can cause an increase in perspiration, and may help break fevers.

There are multiple varieties of milkweed, some of which are poisonous, so do your research and learn how to clearly identify the safe from the potentially deadly milkweed varieties before using it in home remedies.

This weed will eventually die on its own, so there is absolutely no need to till it from the garden area.

Chickweed helps to enhance the soil by attracting many other beneficial soil-enriching organisms to the area and infusing the dirt with phosphorus and potassium. It actually attracts honeybees during the spring through early summer months.

Creating a compost pile around the growth of chickweed will help it develop potentially more rapidly and generate better soil. If you feel you just have to get rid of the chickweed growing around the homestead, toss the leaves and roots of the plant onto the compost pile. The weed is edible and is believed to also possess medicinal properties. Chickweed tea has been used a both a blood cleansing agent and to fight obesity. Poultices made from the leaves and roots of the weed can provide moisture to dry skin and help heal rashes.

It has also been use in natural remedies designed to treat asthma, constipation, urinary tract infections, stomach aches, and kidney problems. Like plantain, chickweed is also tasty in salads.

This sun-loving weed is rich in omega-3 fatty acids an is often used in salads and soups due to its heart-healthy nutrients.

This weed closely resembles hemlock, so be careful what you pick when trying to find a natural remedy for contraceptive! Due to its diuretic properties, queen Anne’s lace may also be useful in breaking up and eliminating kidney stones. Ancient folks used the weed to treat ring worm.

Every time I see someone mowing over or spraying dandelions it makes me cringe – and not only because I enjoy sitting barefoot in the yard and hand-feeding them to my rescue 60-pound plus tortoises!

Dandelions are perhaps the most misunderstood weed on the planet. They are right in copper, potassium, magnesium, silicon, iron, phosphorus, and calcium.

The useful weeds help to loosen hard soil and allow more water to reach the roots of plants. Dandelions also attract honeybees – as anyone else who walks around the homestead barefoot probably already realizes!

If stung or bitten by an insect, putt off the head of the dandelion plant and rub it directly onto the affected area, it will leave a slight yellow stain on the skin, but will soothe the pain and help prevent swelling.

The leaves, roots, and flowers of the weed are all edible. Dandelion tea and wine are quite delicious! It is also a rich source of vitamin A, and vitamin C. The weed can be useful as an appetite stimulant, in treating gall bladder problems, and liver issues.

This weed has been used in natural remedies created to prevent or eliminate bronchitis and respiratory problems. It is also high in calcium, potassium, chromium, vitamins A, E, C, B2, and B3.

White clover is also believed to be an excellent expectorant and blood cleanser. To make a healing tea using the weed, steep leaves and flowers for approximately a half an hour.

If you are concerned about “gut” health, chew on the leaves of the weed to absorb its natural insulin fiber. The roots of the weed also also believed to enhance the overall immune system while cleansing the bowels, colon, and intestines.

In Japan, burdock root is a common ingredient in soups and stir fry dishes and is even sometimes juiced and poured over ice to sip on a hot afternoon.

Both horse nettles and stinging nettles should never be forced out of the soil at the end of a weedeater blade. Horse nettles can be cooked into stews, and also used a both a diuretic and a sedative. Sure, you have to don gloves when dealing with stinging nettles, but it is worth it.

This is another weed worth growing in and around your garden. Ground ivy is an excellent companion plant for all types of melons, tomatoes, squash, brussel sprouts, peppers, cucumbers, cauliflower, and broccoli.

It is a favorite of organic gardeners because it has the capability of repelling cucumber worm, tomato horn worms, cabbage worms, various types of beetle and other insects.

Ground ivy has been use in herbal remedies designed to treat tinnitus and inflammation, especially of the eyes. It has an exceptionally high vitamin C content, and is often used as an astringent, in metabolism tonics, as a diuretic, and a mild stimulant.

This common backyard weed flowers and produces seeds year-round. It is often found growing in areas of rich soil, indicating a good plot to plant in. Shepherd’s Purse is often foraged in the early spring when its cabbage-tasting leaves are young and the most tender.

It is a prime ingredient in a rice and barley dishes consumed ritually in Japan every January. Shepherd’s Purse can be tossed into salads as an alternative, or in addition to lettuce.

When the plant grows older and taller, the leaves can be used as a substitute for cabbage in recipes. The weed produces a more peppery taste as it ages.

Shepherd’s Purse can be eaten either cooked or raw and can also be ground into a meal and used as part of a skin breading for meats or in soups.

The seedpods of the weed are harvested and used as a seasoning in dishes that call for a pepper flavor. The roots of the weed, whether they are dried or fresh, have also been used as a substitute for ginger root.

Sherpherd’s Purse has been used by herbalists to treat diarrhea, and to curtail both external and internal bleeding.

The seeds from the weed can be cut open and placed around garden plants to deter insects. The inside of the seed boasts a sticky and gummy substance that affixed the mouths of any insect that tries to eat them, to the outer pod. The seed gummy filling is highly toxic to most larvae.

Wrap Up (and a Question)

Discover what edible and medicinal weeds are growing on your homestead, take a photo of them, and make an identification book – field guild to share your knowledge with the entire family.

Can you make a meal entirely from material foraged from around the homestead?

14 thoughts on “Weeds You Should Be ‘Growing’ On Your Homestead”

"Hi! I'm Kendra. I'm a wife, mother, and homesteader. I love everything that has to do with simple living. I'm a canning instructor, an avid gardener, and a constant learner of old-fashioned skills. Here is where I share it all. Welcome to the adventure!"
Deer Harvest and Hide Tanning Attempt
How To Refurbish A Hand Water (Pitcher) Pump
25 Chores You Should do On Your Homestead this Spring
40 Ways to Use Lemons on the Homestead
37 Ways To Earn Extra Income Off Your Land