I made an exciting discovery yesterday, which I was anxious to share with you all. But first, let me back up to a few months ago in early Spring when I discovered Shepherd’s Purse growing wild in our yard. I have attempted to grow it from seed in the past, with no luck, so I was thrilled to find it thriving all over the lawn! 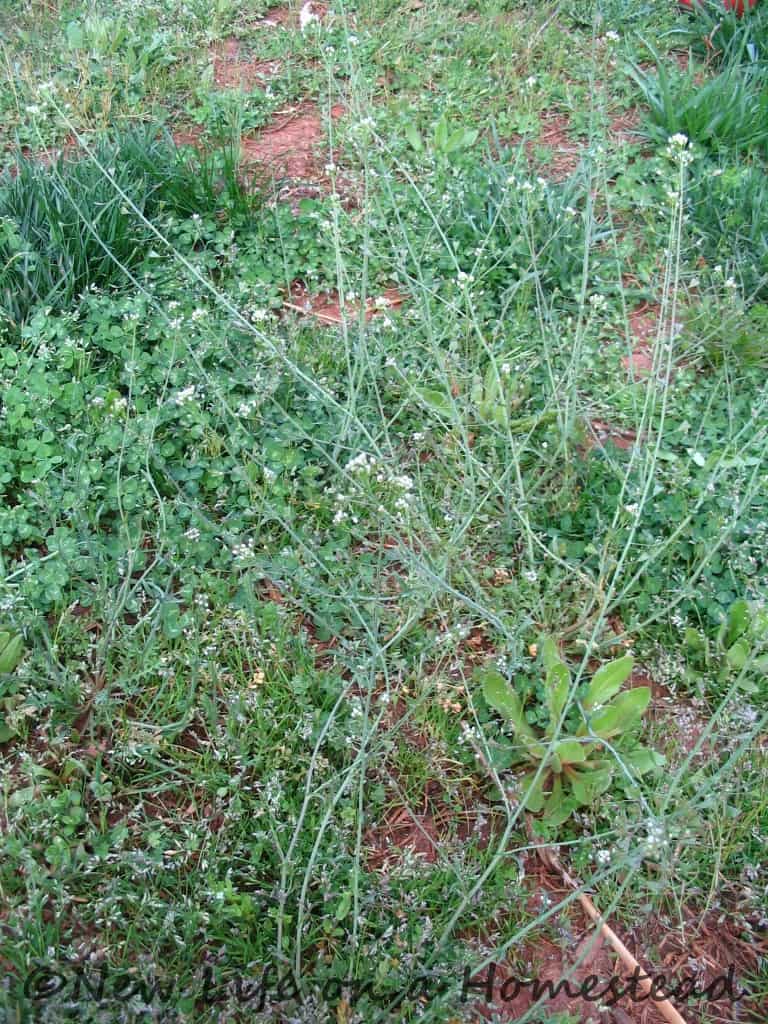 Discoveries such as this make me glad we didn’t sow grass, and we hardly ever mow. New, useful plants are presenting themselves to me every year. At first it looked like nothing but a bunch of scraggly weeds. But one day as I was walking to the garden I noticed a particularly tall plant, stretching a good foot and a half above the rest.

I squatted down beside it to take a closer look, and immediately recognized those heart-shaped seed pods. Shepherd’s Purse!! I couldn’t believe my luck. And suddenly I realized it was growing all around me. Beside the greenhouse, inside the garden, in the front yard, it was everywhere! Hardly able to contain myself, I skipped inside and called the kids out for a quick lesson on its edible and medicinal properties.

Without doing an entire post on the plant, I’ll just share some information I’ve gathered about Shepherd’s Purse (please research further before harvesting it yourself):

Edible Parts: Leaves eaten in sandwiches, salads, soups, as a vegetable; fresh or cooked. Stalk is stir-fried, or eaten raw. Bud and flowers eaten raw. Seeds are stir-fried and used as pepper, spice, seasoning. Roots are used fresh or dried as substitute for ginger or candied in syrup.

Stops bleeding internally and externally. Make a poultice by crushing up fresh or dried leaves to apply to a bleeding wound. Make a tincture by filling a glass jar with the top part of the plant (flower and seed pods) chopped into small pieces, and covering with vegetable glycerin or 80%+ proof Vodka. Allow to sit for 4-6 weeks, then strain off herbs. A tea can also be made to ease internal bleeding.

Warnings: Avoid the herb during pregnancy, except during labor because it stimulates uterine contractions.

How To Make A Shepherd’s Purse Tincture

I decided to make a glycerin tincture to experiment with. My little girl, Xia, has had some really bad nosebleeds. The few times she has been hit on the nose, or bumped her nose, it has bled worse than any other nosebleed I’ve experienced. It absolutely gushes. She doesn’t bleed profusely when she’s cut elsewhere, so I don’t think it’s a bleeding disorder. She just seems to have a very sensitive nose. I thought I’d make a tincture to use the next time she got a nosebleed, to judge how well it stopped the flow.

First, I gathered a bunch of fresh stalks, cutting them off about halfway from the base so as not to kill the plant. 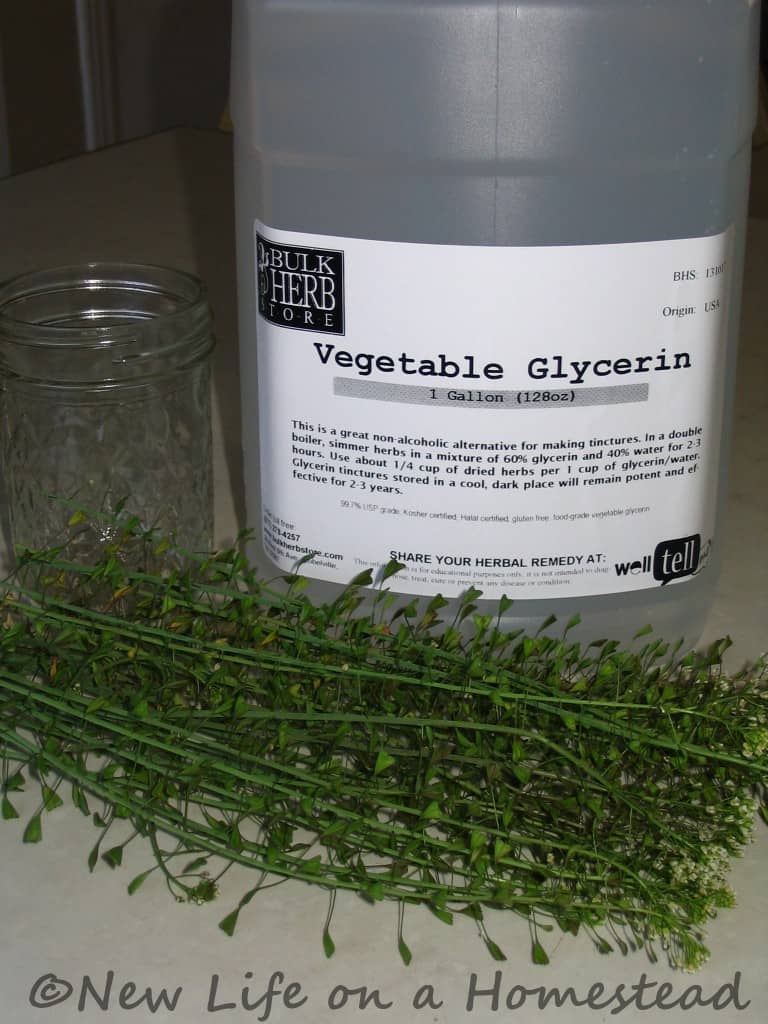 To make a tincture all you need is the plant and either alcohol or glycerin. Fresh plants are better than dried, as dried Shepherd’s Purse loses its potency rapidly. I decided to use vegetable glycerin so that I could use it on the children without fear of it stinging. It can also be taken orally. (I actually took an alcohol tincture of Shepherd’s Purse after giving birth to help control the bleeding, per my midwife’s instructions, and can attest to its effectiveness.)

I buy my vegetable glycerin (and almost all of my dried herbs) from The Bulk Herb Store {affiliate link}. Make sure that what you are using comes from a reputable, top quality source. I would not use the glycerin that you can buy at the drug store. 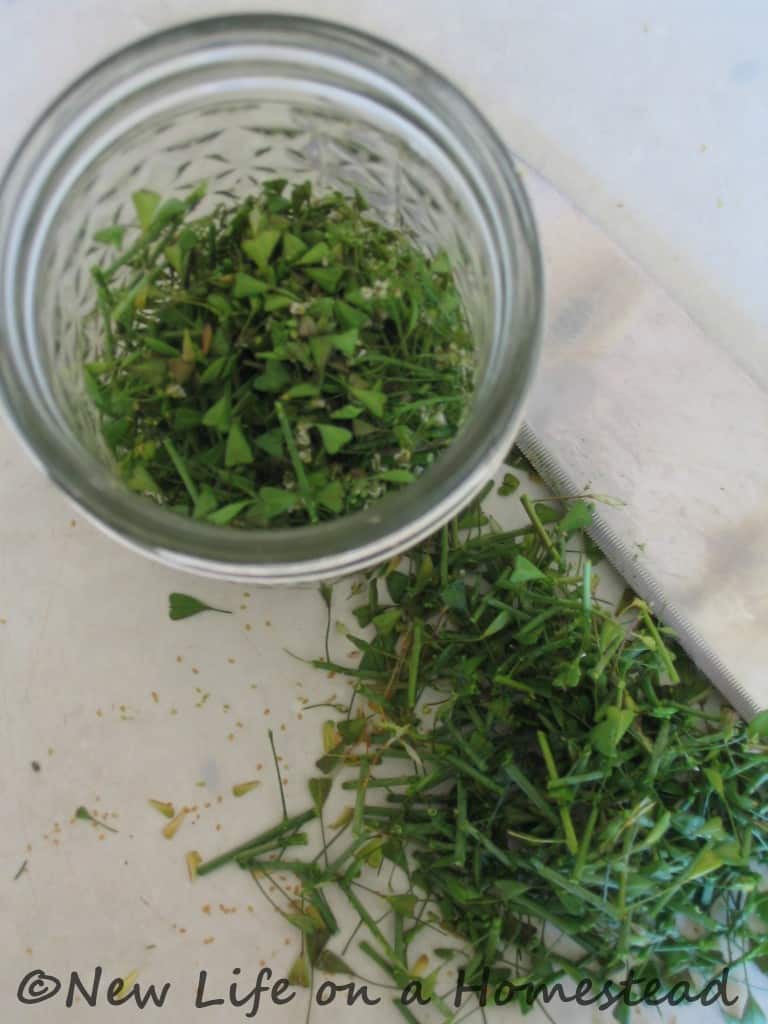 Chop up the entire plant, minus the roots. Fill a container, such a small mason jar, and then cover it with either Vodka or glycerin. 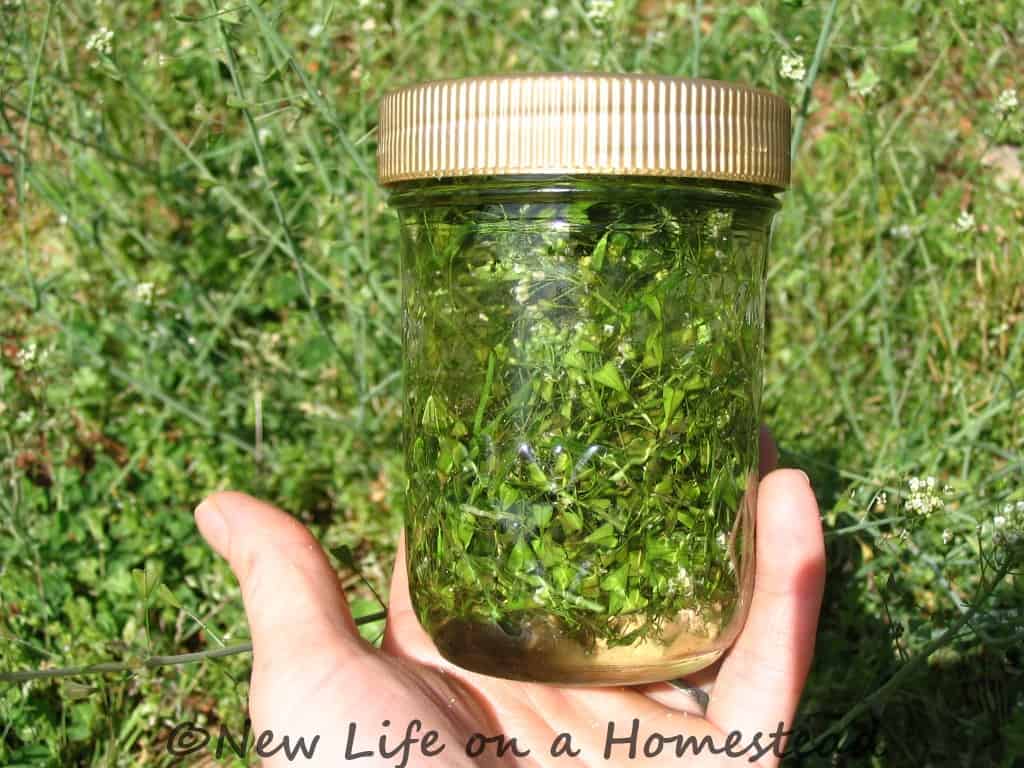 Place the jar out of direct sunlight. I kept my jar in the bathroom cabinet. Allow the herbs to steep for at least 3 weeks before straining off; 4-6 weeks is often recommended. Store in a dark place, or in an amber bottle. I actually haven’t even strained off the herbs yet, and it has been well over 8 weeks now. I do need to do that.

So, yesterday Xia was supposed to be in bed, but instead she was fooling around and fell off of her bed and hit her head (and nose apparently) on the wall. Almost immediately her nose started gushing blood. Her screams caused me to drop what I was doing and run to her bedroom to see what had happened. She was standing in the doorway, with blood just dripping down, saturating the cream carpet at her feet.

I hurried her into the bathroom to lean over the sink, and gave her a handkerchief to hold against her nose while I ran to get my supplies. I keep a pack of cotton nose plugs handy just for her nosebleeds, so I grabbed a handful of those, reached into the cabinet to retrieve my Shepherd’s Purse tincture, and ran to the kitchen to grab a pack of ice before re-joining Xia in the bathroom.

Now, normally she completely saturates at least four or five of these nose plugs before I’m able to get the bleeding to stop by applying ice to the bridge of her nose. But this time was different. I dipped the first nose plug into the glycerin tincture, and allowed it to soak up the liquid for a moment before sticking it up her nose. I held the ice to the bridge of her nose, watching the plug, expecting it to fill and need replacing.

But a funny thing happened. The cotton was only red from the blood that was dripping as I pushed the plug into her nostril. It was as if the bleeding had stopped almost immediately upon entry. We waited for a couple of minutes, then I removed the ice and told her I was going to take the plug out. Completely expecting it to start dripping again once I removed the plug, I had her lean over the sink and I had a new plug ready and waiting.

But there was no more blood. Not a single drop.

Her nosebleed had completely stopped.

This may not sound like much to some of you, but it was HUGE for us. The excessive bleeding she experiences with nosebleeds always makes me a little panicky. It seems to take forever to get the blood flow to stop. But this time was different. It stopped almost instantly. I was filled with relief and delight, and Xia was pleased that it was over with.

I’m so excited to have a new plan of action for the next time her nose decides to start bleeding. I thank the Creator for sending me this useful plant to treat my family with. This tincture will last about a year before I need to replace it with a fresh batch. Perhaps I’ll be fortunate enough to have more volunteer plants spring up next year.

19 thoughts on “How To Make A Shepherd’s Purse Tincture To Stop Nosebleeds Fast (and More)!”