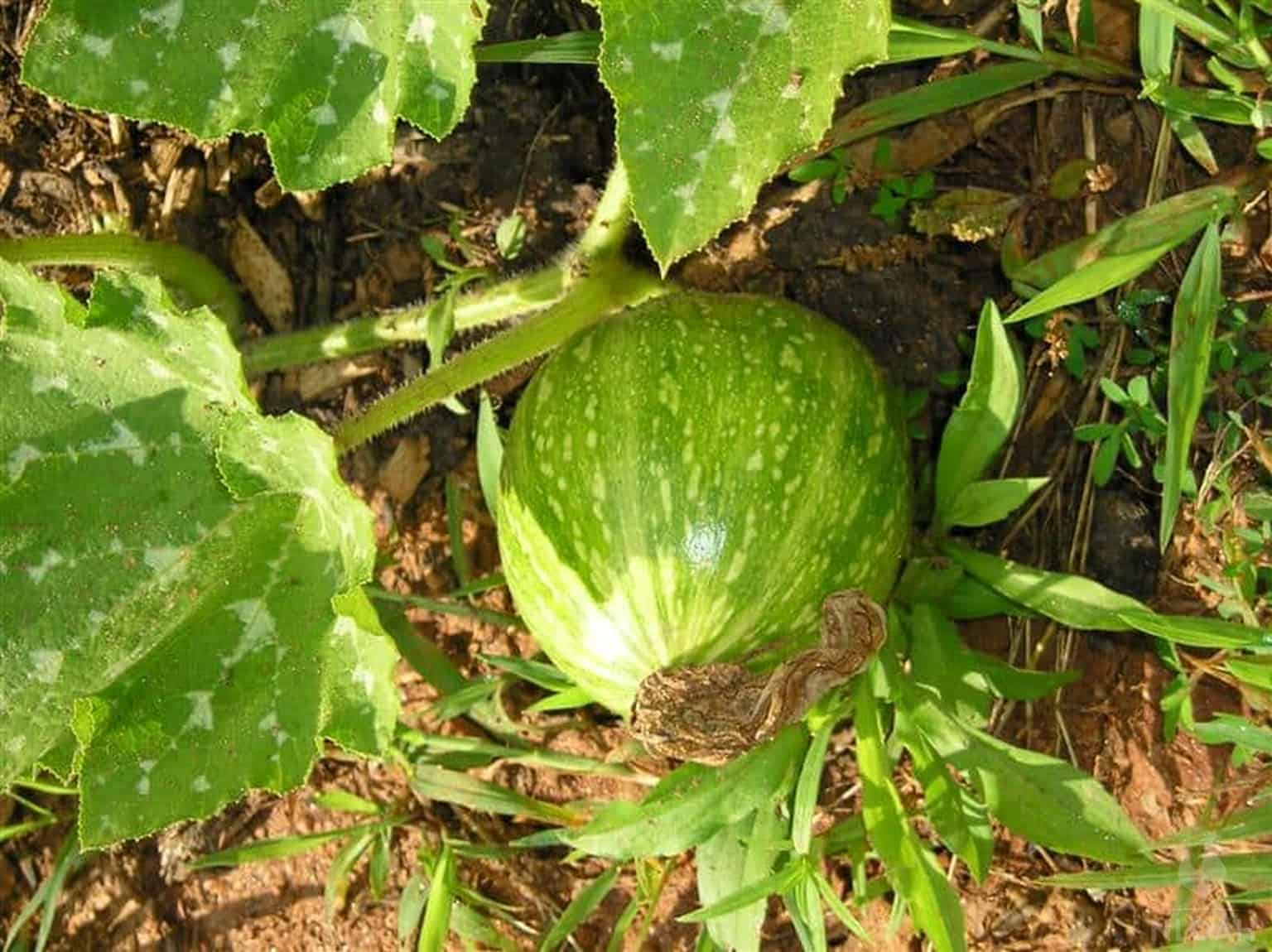 Everyone knows the old saying, “you get what you pay for”. But what if we told you that’s not always the case when it comes to growing pumpkins?

If you plant pumpkins, it’s possible to yield far more than expected. So how many pumpkins should you expect per pumpkin plant?

The average pumpkin plant will produce between 2 and 5 pumpkins. But, miniature varieties are known to produce far more (up to 12 pumpkins).

There are lots of factors that go into how many pumpkins a plant produces, including the growing conditions and location…

Are you interested in learning more about how many pumpkin plants you can expect? Then this post is for you!

What Influences the Number of Pumpkins a Plant Produces?

There are several factors that influence the number of pumpkins a plant can produce – let’s explore them.

Location is key when growing pumpkins. Pumpkins need plenty of sun and warm temperatures to thrive.

If your pumpkin patch is in an area with short days and cooler temperatures, the plants may struggle to survive and will not produce as many pumpkins as they would under ideal conditions.

Additionally, if your patch is in an area with high humidity or frequent rain, you may see fewer pumpkins due to increased disease pressure from fungi or other organisms.

Pumpkin plants need plenty of sunlight to grow and thrive, so if your garden isn’t getting enough sun, then this could be limiting how many pumpkins you can harvest from a single plant.

If possible, try to move your pumpkin patch to an area that receives at least five hours of direct sunlight each day for optimal results.

These nutrients should be added to the soil at planting time and throughout the season in order for the plants to receive enough of these minerals for optimal growth.

If your soil lacks any of these essential nutrients, you may notice that your pumpkin plants are stunted or producing fewer pumpkins than normal.

The type of pumpkin you choose can also affect the number of fruits produced per plant. Some varieties such as Jack-O-Lantern pumpkins produce more fruit per plant than others like Baby Boo mini-pumpkins which only produce 2-3 fruits per plant on average.

So, if you’re looking for lots of big fruits from one plant then make sure you choose varieties known for producing larger yields!

Here’s a quick guide to the most popular varieties of pumpkins so you can find just the right one for your project!

Autumn Gold pumpkins are small, round, and bright in color – ranging from golden yellow to orange.

With their smooth, glossy skin, they make beautiful decorations both inside and outside.

And although they don’t produce as much flesh as other varieties, they still produce between three and five pumpkins per plant. Perfect for smaller spaces!

These little cuties are extremely popular with children, due to their sweet size and adorable shape.

Baby Bear pumpkins grow on vines and are usually two inches in diameter – which makes them ideal for mini jack-o’-lanterns or tiny pies.

For those looking for something a bit more dramatic than just an orange pumpkin, Blaze has got you covered!

As its name implies, these pumpkins range from bright orange to deep red in color – making them perfect for striking accents on a porch or walkway. Each plant usually yields 10-12 fruits.

If your aim is to carve a spooky jack-o-lantern, then the blue jarrahdale variety is your best bet. This unique pumpkin has a bluish hue and produces three to five pumpkins per plant.

This variety looks like something right out of the Wild West with its tan color and bumpy texture. Each Buckskin plant can give you an average of five pumpkins.

Named for its popularity in Connecticut, this variety is long, wide, and bright orange. It produces an average of three to five pumpkins per plant.

If you’re looking for something out of the ordinary, try Futsu black pumpkins! These have an impressive dark green hue with raised white bumps all over their surface. You can expect two to five pumpkins per plant from this variety.

Howden plants will give you an average of two to five pumpkins each season.

For something both tasty and decorative, Kakai is a great option. These are small, round-striped pumpkins that are perfect for decorating your front porch or making tasty pies or bread!

You can expect two to three pumpkins per Kakai plant.

If you’re looking for something extra special this Halloween season, then Lumina might be just what you need!

They look like traditional jack-o-lanterns but are a luminescent white instead of orange. You can expect four to six pumpkins from each plant.

A popular choice due to its sweet flavor and small size, Small Sugar plants will produce around three to four tasty fruits each season.

Last but not least we have Tom Fox. These cute little gems are sure to make any fall display stand out!

Each Tom Fox plant gives an average of three to four white mini-pumpkins per season.

The first thing to consider is the size and shape of your pumpkin patch. If you’re planting in rows, then you should leave enough space between each row so that the pumpkins can spread out as they grow.

Generally, you should allow at least three feet between rows and one foot between plants within the same row. This will give the pumpkins enough room to mature without overcrowding each other.

If you’re growing pumpkins in hills instead of rows, then there are two main factors to consider when determining how much space you need:

Most hills should support up to three vines, but if you’re trying to maximize your yield per hill, then four vines may be necessary.

As for ground cover, try leaving about 1 foot of open soil around each hill so that bees can easily visit for pollination purposes and the soil can absorb moisture more effectively.

Maximizing the Number of Pumpkins a Plant Produces

Whether you’re a novice or an experienced gardener, these steps will help you grow bigger and better pumpkins.

When it comes to pumpkin production, location matters. Pick a spot that gets plenty of sun, as pumpkins love all the warm sunshine they can get!

Also, be sure to pick a spot with well-draining soil—you don’t want your pumpkins sitting in standing water.

If you want even more success from your pumpkin patch, try putting down some mulch and compost beforehand for extra nutrients.

Pumpkins need plenty of water during their growing season! Water them regularly during dry spells and give them about one inch of water each week when it rains. Be sure not to over-water though, too much water can lead to rotten pumpkins.

Fertilizing your pumpkin patch is essential for optimal growth. Use a balanced fertilizer—one with nitrogen, phosphorus, and potassium—and apply it every few weeks throughout the growing season.

Another way to ensure your plants get all the nutrients they need is by planting cover crops such as clover or rye before planting the pumpkins. This will add more organic matter to the soil so the plants can soak up more nutrients as they grow.

Pollinating your pumpkin plants is essential if you want to get more fruit from them. To do this, you can use a paintbrush or cotton swab to transfer pollen from male flowers to female flowers.

The female flowers are identifiable by their mini-pumpkin at the base of the petals.

Be sure to pollinate each female flower as they bloom since the first ones won’t produce fruit if they don’t get pollinated.

It may be tempting to pinch off extra blossoms in order to make the plant focus its energy on the fewer fruits it has.

However, this isn’t recommended because it could reduce overall yields rather than increase them. Instead, allow all blossoms that are present on the vine and see what happens!

Be OK with Smaller but More Pumpkins

If you want more pumpkins, be prepared for smaller pumpkins! As long as there is enough space between fruits and enough water and nutrients for each one, it’s ok for them to grow small.

Keep in mind that many recipes call for smaller pumpkins anyway, so don’t worry about having smaller ones than expected – just enjoy having more pumpkins in general!

The number of pumpkins a pumpkin plant produces depends on the health and vigor of its vines.

A healthy pumpkin vine can produce up to 10 female flowers (the ones with a pistil in the center) at any one time. The more vigorous your vines, the more flowers they will produce, and thus the more pumpkins.

Of course, some of this does depend on the type of pumpkin plant you are growing. As a general rule of thumb, larger pumpkins (like carving varieties) will come from plants that produce fewer pumpkins overall.

With proper care and maintenance, on average, each pumpkin plant should be able to yield 5-10 pumpkins in total!

So don’t be discouraged —with some TLC and careful pollination, you can still reap an impressive harvest this season. Happy pumpkin growing!

"Hi! I'm Kendra. I'm a wife, mother, and homesteader. I love everything that has to do with simple living. I'm a canning instructor, an avid gardener, and a constant learner of old-fashioned skills. Here is where I share it all. Welcome to the adventure!"
How to Identify Poison Hemlock and its Lookalikes
How To Grow Stevia... and Why You Should
15 Plants that are Natural Sweeteners
How To Grow Tarragon in Your Garden
So, How Much Sun Does Garlic Need?