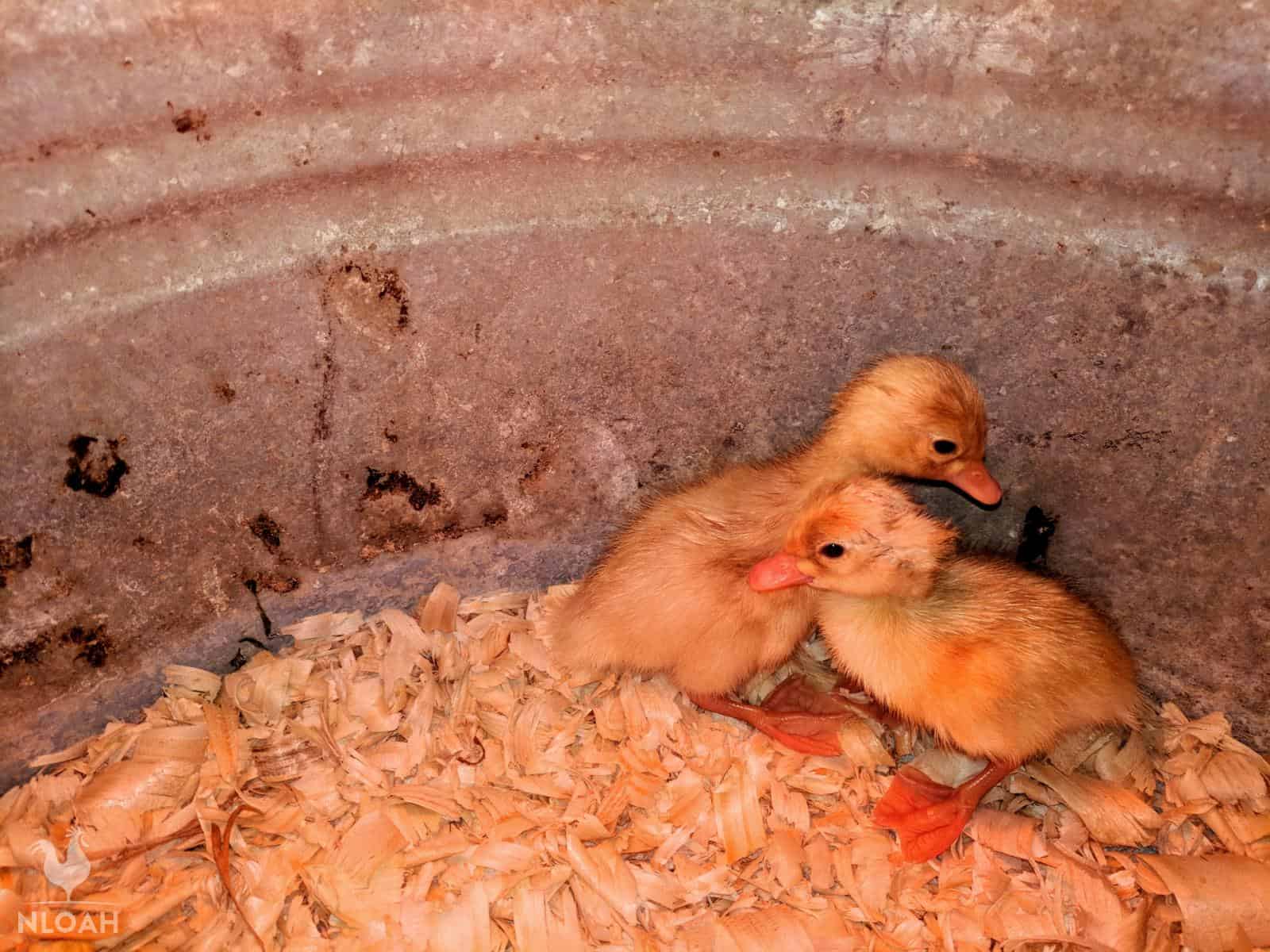 Learning the sex of ducklings can be a puzzling yet interesting endeavor. All of the cute little baby ducks in your brooder or incubator might look and sound identical at first glance, but there are slight yet distinct differences between the future drakes and hens.

Checking a duckling’s vent to sex it can harm or cause mortal injury to the poultry bird if done improperly.

Even though there are ample videos showing you how to check a duckling’s cloaca to sex it online, this act should really only be undertaken by a veterinarian or a trained and experienced breeder.

Because a duck’s reproductive organs and nestled entirely inside of their bodies, verifying sex involves some intricate maneuvering. When a vent is checked properly, the ducklings are not injured or traumatized by the act.

If you apply too much pressure on either the cloaca itself or the duckling’s belly to extend the vent slightly outside of the body, severe internal damage could occur.

Put the duckling on a table. While cloacal examinations have been conducted successfully earlier, it is best to wait until the baby duck is at least 12 days old.

Again, I cannot stress strongly enough how dangerous it can be to conduct a vent check if you are not properly trained. Vent checking a duckling for sex determination is far more difficult than sexing a mature duck because of both its small size and fragility.

Position the duckling so its legs are positioned away from you and it’s breast is facing up. The duckling’s tail should hang over the end of the table sp the vent can easily be exposed.

Place thumbs on either side of the vent and then slowly and gently (emphasis on gently) pull the vent slightly apart.

Expose the walls of the cloaca and the duckling’s genitals to see if the poultry bird is a male or a female.

A duck penis will protrude from the vent. A female duck will have an oviduct opening in the vent. vent walls and genitals by folding the tail down and in the opposite direction pressing gently upward.

In male ducklings and older but still immature ducks, the penis is sheathed but in mature ducks it is unsheathed.

As shown in the video below, the duckling vent should only be opened gently and not very wide for an absolute maximum of 30 seconds:

Less intrusive means to garner a better than educated guess at a duckling’s sex can be easily conducted by amateur duck keepers.

Caption: The second duck on screen left is a male. You can easily see the curly drake feather in the middle of its tail, which denotes sex.

One of the simplest and least intrusive ways to sex ducklings is by a thorough review of its feathers. Not all duck breeds have feathering that is easily distinguishable at a young age, but many domesticated and wild varieties do.

Pekins, Anconas, Magpies, Swedish, and Cayugas are prime examples of duck breeds that do not have plumage that differs by sex – especially at the duckling stage. Indian Runners and Welsh Harlequin ducks are among the breeds that offer easy sexing by plumage.

Researching the breed of duck you are keeping will help you learn what specific feathering colors and styles can help indicate sex.

Keep in mind, that it is not uncommon for some ducklings to present only female plumage until they are close to three months old.

Once ducklings are nearing this age the presence of a “drake feather” should develop. A drake feather is one or two curly feathers among the other tail feathers on a male duck. Female ducks do not have any type of curly tail, all of their tail feathers remain flat.

Although none of the Pekin ducklings in the photo above have a drake feather yet, you can still tell distinct differences between the shape of the tails in the two ducklings in front on both screen right and screen left, respectively.

To reinforce your attempt to sex ducklings by plumage you can also take size into consideration. Even from an extremely young age, male ducklings are larger and heavier than female ducklings.

Caption: The larger and taller duckling on screen left is a male and the smaller one on screen right is a female.

If you are raising a breed of duck that does not have differing plumage and the size difference is so slight you still are not sure of the sex, there is one more way you can help determine if the cute little fuzz ball is a male or a female.

Just close your eyes, pick up a little duckling, separate it from the rest of the tiny flock and then listen carefully. Ducks that are less than six weeks old often sound nearly alike, but that soon changes.

After the six-month milestone, female ducks develop a louder and more demanding sounding quack, while males have a more pleasant or softer sounding quack. In my personal experience, female ducks make a far more honking sound than males – especially when excited or angry.

Listen to the different sounds male and female ducks make by clicking here.

Some duck breeds show a distinct difference in their bill color and even shape year-round, not just during the breeding season.

While this visual cue can be very helpful in determining the sex of a duckling, it does not apply to all domestic duck breeds and cannot be accomplished until the birds are usually a few months old.

Some duck breeds boast hens with orange or orangish-brown colored bills and drakes with green bills. Sometimes the difference in color or shape is so slight that there is still a lot of guesswork when attempting to discern sex using this method.

Muscovy, Appleyards, Rouens, Indian Runners, Khaki Campbells, and Welsh Harlequins are good examples of duck breeds that can have bill differences that may help with sexing the poultry birds.

Muscovy drakes develop a bill that is wider, flatter, and more straight than a hen of the same breed. Muscovy hens have far less of a platypus style bill. These hens have bills that include a ridged middle and are more curvy, pointy, and narrow in shape than a drake of9 the same breed.

Black Runner and Fawn Runner ducks all have dark bills when they are hatched, but color differences start to appear as they age. Abacot Ranger females have a dark green bill, but males of this same breed have a bill that is a lighter shade of green.

The cute little webbed feet on male ducklings can often appear disproportional to those of female ducklings. Even before you can use body size difference to help determine the sex of ducklings, the difference in foot proportion may be evident.

Male duckling feet are not only typically larger than a female’s feet but the legs themselves often tend to be bulkier when compared to the more slender legs of a female.

A male duckling is sometimes less active than his female brooder peers – perhaps because of the awkwardness that can be created due to the quick growth of their feet and legs.

During their first few weeks of life, you can watch the ducklings interact in the brooder to determine if any of the little fuzz balls look a bit lazy or at least less active. The more lethargic ducklings might just be males.

In some duck breeds, wing growth can help determine the sex of ducklings. Female ducklings tend to develop true feather sprouts on their wings as well as around their bellies and tails than male ducklings.

Carefully inspecting and monitoring the fuzz to feather development of each duckling’s wings can be a fairly reliable method of sexing them.

When looking over the wings for feather sprouts, also pay attention to the weight, and feel of the wings. A female duckling’s growing wings tend to lose that paper-thin feel a lot more quickly than a male duckling.

As already mentioned female mallards are active and more vocal than males. The black line that cuts through the eye is more prominent in male mallard ducklings, while in fames it’s more faded.

Male mallard baby ducks have a dark brown bill, while females have a lighter brown bill.

Pekin female ducks are louder and have more energy than male ducks. In fact, male Pekin ducks don’t really quack, it’s more of a muffled quack. A female’s duck is more orange than a male’s.

What Is A Sex-Linked Duck?

If you purchase a sex-linked duckling, there is no need to attempt to determine its sex. These ducklings and other poultry birds are bred so breeders can sex the poultry birds when they are “day olds.”

This process produces a down on the ducklings that creates a phenotypic expression – or sex linkage. The gender of the duckling is tied directly to sex chromosomes that produce a male or female down related color. Down is the fuzzy pre-feathers that cover a duckling’s body when it is born.

In 1930 R. C. Punnett wrote in the journal, Nature that it might be possible to establish the gender of ducklings based solely upon feather color. It took another two years for Punnett to find a way to actually produce sex-linked ducklings in the breeding offspring he was working with during testing.

Learning how to sex ducklings can help in both flock and breeding planning. The healthiest male to female ratio for ducks is one mature drake per every three females.

Knowing how many future drakes are in your recent hatch will quickly allow you to plan the sale of any unneeded males – or how many more females you will need to keep all of the adorable little fuzzy ducklings.

1 thought on “9 Ways to Sex Ducks and Baby Ducks”

"Hi! I'm Kendra. I'm a wife, mother, and homesteader. I love everything that has to do with simple living. I'm a canning instructor, an avid gardener, and a constant learner of old-fashioned skills. Here is where I share it all. Welcome to the adventure!"
How to Incubate and Hatch Duck Eggs
10 Pros and 10 Cons of Raising Ducks
Pekin Duck Breed Guide - Start Here
How to Keep a Duck Pond or Pool Water From Freezing in the Winter
Duck Language: How to Interpret Duck Behavior