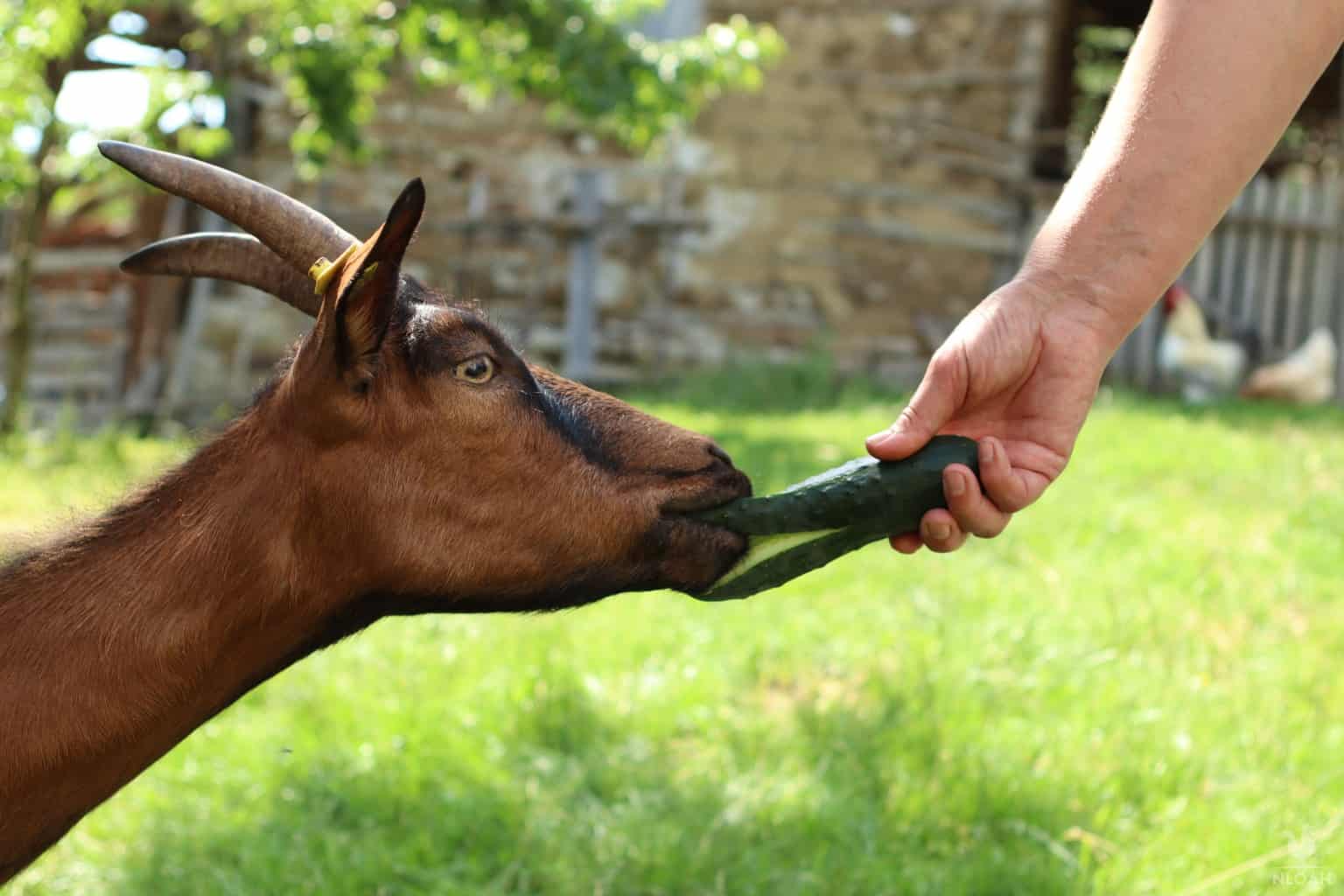 Cucumbers are one of the most popular veggies in the world. Used in all kinds of salads, appetizers, and cultural dishes, it is hard to imagine cuisine without these cool, crisp staples.

But enough about us, how about our goats? Can goats enjoy all sorts of foods, but do they enjoy cucumbers as well?

Yes, goats can eat all parts of a cucumber (either chopped or whole), including the skin, flesh, and seeds. Cucumbers are a good source of water for goats, as well as B vitamins and vitamin K. They also contain a small assortment of minerals.

All known domestic cultivars of the cucumber are safe, but they should not eat wild cucumbers which may be significantly toxic for goats.

So, goats can eat cucumbers. You’ll be happy to know that most absolutely love them like they do with a large variety of vegetables. They’re crunchy, refreshing, and hydrating and that makes them a perfect treat or supplemental food.

But there is a lot more to know about feeding cucumbers to goats, so you’ll want to keep reading to get the whole story.

Benefits of Cucumbers for Goats

Cucumbers are a healthy, wholesome option for goats, but they have only a modest load of vitamins and minerals.

The only significant vitamin is vitamin K, though most of the B vitamins are represented in lesser amounts. Minerals are somewhat lacking in cucumbers, with only manganese, magnesium, and potassium being healthy in any notable quantity.

In goats, vitamin K is important for blood clotting and bone health. B vitamins are all important for different aspects of goat metabolism, and cellular repair.

The minerals found in cucumbers are all important for goat health, too, with manganese being especially critical for detoxification and energy metabolism.

Magnesium is important for nerve function and muscle relaxation, while potassium helps with water regulation in goats.

While cucumbers don’t have an exceptional nutrient-dense profile, they are a very good source of water. Goats need to drink a lot of water every day, and cucumbers can help them stay hydrated.

The high water content also helps keep goats cool in hot weather. The skin of cucumbers contains minerals and some fiber, so don’t peel them before feeding them to your goats.

Overall, cucumbers are a healthy, enjoyable treat for goats, and they can help keep them hydrated in hot weather.

Yes, and this is the preferred way to serve them to your goats. However, whole cucumbers, though reasonably soft, are still cumbersome for goats to eat, so you’ll be better off cutting them into short spears or small cubes.

Yes, goats may safely eat cucumber skins. There is no need to peel the skins from the flesh unless you want to.

They sure can. Cucumber seeds are soft and harmless, and goats will eat them right up with no trouble.

No! Wild cucumbers, though cucumbers in name, are only somewhat related to the ones we buy and grow. Wild cucumbers contain high amounts of harmful compounds called cucurbitacins.

Though usually a “taste deterrent” these toxins can cause severe gastrointestinal problems (vomiting, diarrhea) and even hair loss in goats when consumed in high quantities, so it is critical that you only feed them safe, domesticated cucumbers.

Yes, but there is no good reason to cook them. They turn mushy and gross, and the meager nutritional value they have will be wiped out almost entirely by cooking.

Stick to feeding your goats raw cucumbers for best enjoyment and health!

Since we are talking about cooking, we should talk about pickles, too. In short, never, ever give your goats pickles.

Though pickles are usually just cucumbers, the soaking they get in vinegar, salt, spices, and other ingredients makes them totally unsuitable for goats.

Pickles are delicious, that’s for sure, but your goats won’t benefit from them no matter how much they seem to enjoy them.

High blood pressure, electrolyte shock, kidney or urinary tract stones, and other maladies can result from goats eating pickles or other super salty, processed foods. Just don’t do it!

Cucumbers are a safe, healthy treat for goats that can help them stay cool and hydrated in hot weather, but pickles are not!

Beware of Pesticide on Grocery-bought Cucumbers

Another potential issue to keep in mind when feeding cucumbers to goats is the presence of pesticides.

Commercial cucumbers are often heavily sprayed with pesticides to preserve them from harm until they make it to market, so it is important to wash them thoroughly before feeding them to your goats.

Now, most of these pesticides in widespread use are supposed to be relatively safe for consumption by mammals, but there is plenty of evidence to give us room for doubt.

So, just to be on the safe side, it is best to give your store-bought cucumbers a good wash before feeding them to your goats or even peel them to be extra safe.

Washing cucumbers will also help remove any dirt or other contaminants that may be present.

If getting your cucumbers from the store (instead of growing them yourself) you can buy organic offerings which will be free, or freer, of harmful pesticides.

How Often Can Goats Have Cucumbers?

Cucumbers are safe, healthy, and wholesome for goats but they still shouldn’t have them all the time. Just like with any treat, every once in a while is best, not every day.

Too many cucumbers (or any other high-water produce) can cause diarrhea in goats, so offer them in small amounts initially and see how your goats react.

A good rule of thumb is to offer cucumbers no more than a few servings a couple of times a week.

Goats should be subsisting mostly on grasses and similar plant matter, not veggies like cucumbers.

Preparing Cucumbers for Your Herd

The best way to serve cucumbers to your herd is to chop them up into small pieces or slice them into small spears.

This will help ensure that everyone gets a fair share, and more importantly, it also helps goats eat and digest them more easily.

Goats struggle to chew and swallow large chunks of food since they cannot open their mouths very wide.

Chopping cucumbers up makes them much easier to eat and also helps prevent choking.

You can either chop them by hand or use a food processor to do the job quickly, but either way make sure the cucumber chunks are small enough that your goats can eat them without difficulty. Whether or not you remove the skins is up to you.

Can Baby Goats Have Cucumbers, Too?

Yes. Kids can have cucumbers periodically, like adults, so long as they are old enough to be eating solid food all the time.

If they are young enough that they reject food occasionally or are still suckling, they are too young.

If serving cucumber to baby goats, you should chop it up smaller than normal to make it easier for them to eat while preventing choking.

As expected, start with just a few pieces at a time- Too many cucumbers can cause diarrhea in baby goats as with adults.

Make Sure You Clean Up After Feeding Your Goats Cucumbers

Lastly, be sure to clean up when your goats are finished with cucumbers. They may eat them up entirely, but if any pieces or scraps are lying around you’ll want to pick them up.

Cucumbers rot quickly, especially in the heat, and that can attract pests as well as be a health hazard to your goats.