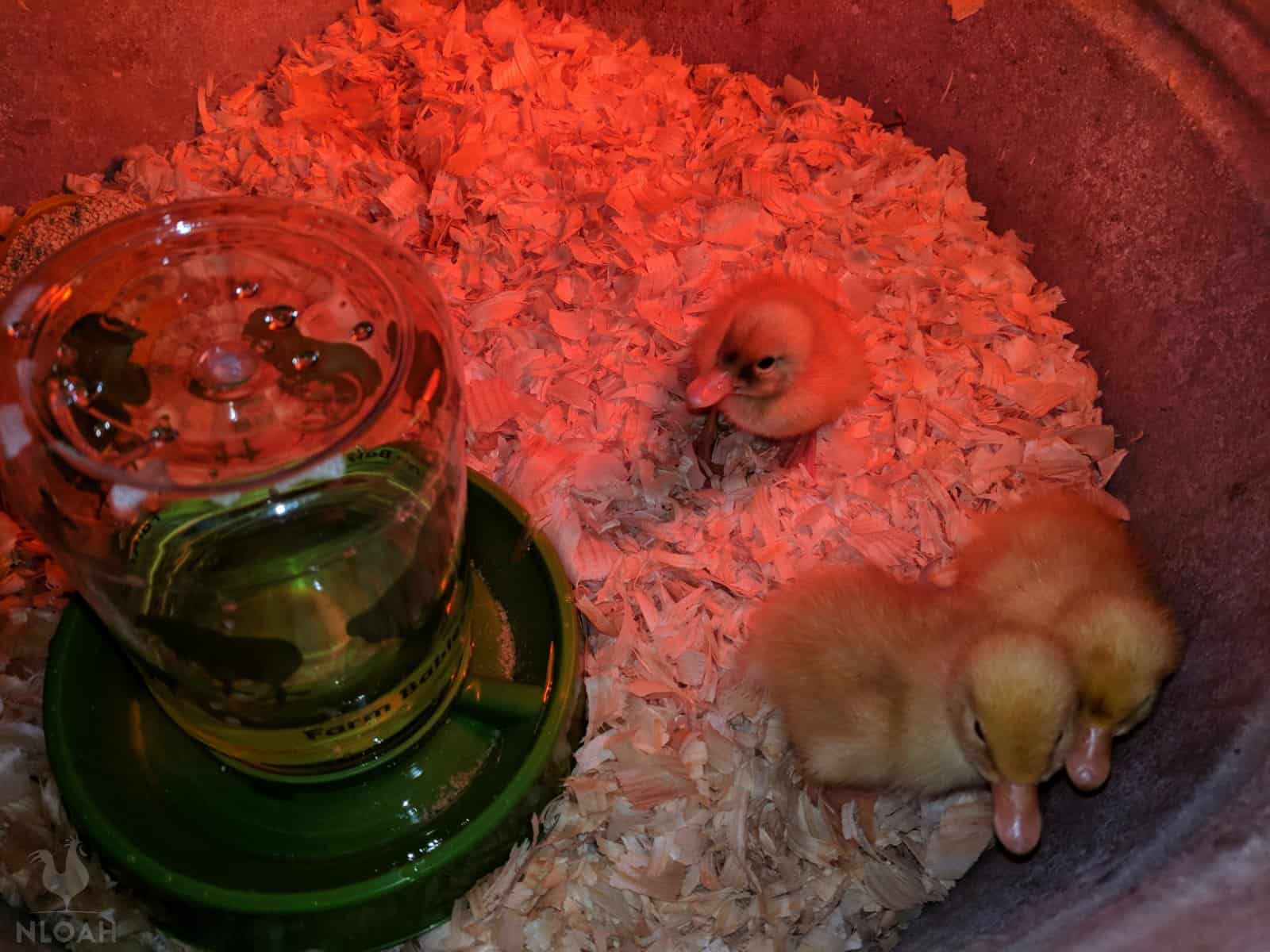 Caring for ducklings in the winter is not necessarily a difficult task, but does require the following of some specific husbandry techniques. Ducklings are, of course, baby ducks. And like all babies, they are fragile, vulnerable, and depend entirely on the help of grown ups (either feathered or human) for their survival.

A chicken remains comfortable down to temperatures of roughly 45 degrees F / 7 C. A duck however, can easily withstand temperatures dipping down to 20 degrees F / -6 C before concerns about frostbite or feet and leg amputation.

Seeing a duck lounging outside in the snow all day during the winter is not uncommon, but ducklings cannot survive such low temperatures until they are at least of juvenile age.

Should Ducklings Be Kept Indoors Or Out?

The most important aspect of duckling winter care is heat – first and foremost. If you get this part of duckling husbandry wrong, the cute and fuzzy ducklings will die … quickly.

Unless a duckling is being taken care of by the duck hen that hatched it (and she has true maternal instincts – some breeds don’t) then the little poultry birds should not be kept outside during the coldest months of the year.

There is a substantial value to allowing ducklings to be raised as naturally as possible, and under their mother’s care outdoors, but, doing so comes with a lot of risk.

If the momma hen becomes bored with the ducklings – which does happen with some domesticated breeds, she may abandon their care. Even if an attentive duck hen momma does everything right, she may just not be capable of keeping all of her babies warm during the winter.

The other concern associated with ducklings being kept outdoors is their ability to swim – even if it is just in a puddle inside the coop run or the waterer used by older ducks.

Ducklings do not have the natural oils that allow these poultry birds to dry rapidly until they are at least two weeks old. If a duckling tries to swim in anything but a shallow bowl before its oils come in, it can quickly become waterlogged and drown.

A duckling has only a thin layer of fuzz when it is hatched and not feathers covering its entire body to help insulate it from the cold.

A duckling kept outdoors could very easily get into any open bowl style waterer or be caught out in the rain since they, like all ducks, will be drawn to water. Not being able to dry quickly before being two weeks old could easily cause the wet or damp duck to get sick and die within days.

I would highly recommend either keeping the ducks indoors (an unheated garage or porch would do fine) in a brooder that has access to an electrical outlet for the heat lamps until they are close to six weeks old, or until the coldest days of winter have passed.

When keeping the duckling brooder in an unheated area insulating all but one side with cardboard, plastic or metal sheeting, may be required if the area away from the heat lamps dips below 35 degrees F / 1 C.

We built a brooder using a wood frame covered in thin metal sheeting and hardware cloth. Using metal materials will vastly reduce if not entirely eliminate the chance of a fire being caused under the intense rays coming from the heat lamps.

Our brooder is used outdoors next to or in the run during warmer weather months so the chickens, ducks, or guineas inside can become acclimated with the rest of the flock until they or they and their momma hens are released back into the general poultry bird population – hence the more durable and thicker hardware cloth being necessary.

Folks have often used plastic baby pools, cardboard boxes, and plastic storage tubs for brooders but the threat of fire is exponentially high when using this type of material for a duckling brooder.

I caution against using a galvanized tub for a brooder. The heat lamp will heat up the metal, and then transfer that heat around the tub, potentially burning the duckling’s feet or any body part it comes into contact with.

Exactly how many brooder lights you will need is dependent upon the number of ducklings being kept and the size of the brooder itself.

The brooder light should be angled down towards but not directly on the ducklings in the brooder and provide one warming space that ranges in temperature between 90 to 92 degrees F (32 to 33 C) the first three days after the hatch.

During the winter, you have to make sure the ducklings do not go from hot to cold and back again inside of the brooder. The food and waterer area away from the main warming area still need to be heated to about 75 degrees F / 23 C to avoid chilling of the birds, and create the potential for respiratory issues.

If you notice the ducklings spending all of their time huddled together beneath a heat lamp, the rest of the brooder is too chilly for them to venture into. If the area where the waterer and feeder are kept are too cold, the ducks could dehydrate or starve if they avoid the area entirely.

How Cold Can Baby Ducks Tolerate?

After the first three days of life the brooder warming area can be decreased to between 85 F to 90 degrees F for the following week. Reduce the temperature down another five degrees F each week until the brooder temperature hits 70 and the ducklings are fully feathered.

When Should Baby Ducklings Go Outside?

Ducklings should not leave the warmth of the brooder until they can safely withstand the average low temperature outdoors. Ideally, the ducklings should be three to five weeks old before they start living outside – weather permitting.

Ducklings are not fully feathered until they are seven to nine weeks old, depending upon the breed. I have never allowed a duckling to live outdoors until it is fully feathered during the late fall through early spring.

Use a poultry bird fountain style waterer or a chick water that has a narrow and shallow tray with a water bottle turned upside down into it. The ducklings should NOT be able to swim in their waterer.

A duckling will need to be able to only drink and dip its bill into the water to ensure their mucous membranes remain moist and healthy.

If the ducklings remain in the brooder after their natural oils come in, then a shallow bowl can be placed in the brooder (separate for the waterer) to swim in. Even before the ducklings have water to swim in, they will splash any water they have access to with their bills, making a big mess inside of their brooder.

You will have to change the bedding in a brooder far more often when keeping ducklings than you do chicken because of this reason – and the larger more liquid nature of their droppings. I recommend keeping bedding away from the waterer area as much as possible.

Keeping a small waterer filled will be a chore but it is an entirely necessary one. Ducklings that try to consume food and do not have water to eat can easily choke to death.

If the weather takes a sudden cold turn after the ducklings have been placed outdoors during the winter, make sure to check their waterer.

A waterer made of plastic will quickly become frozen, leaving the ducklings without something to drink while eating or to dip their bills into to moisten their mucous membranes.

I float a water bottle that is at least 2 parts standard table salt and one part water in my coop waterers so they bob around and prevent the water from freezing. This handy little trick works only until the temperature gets around 10 to 15 degrees outside.

You can also invest in a livestock water heating coil device to keep waterers from freezing if the coop and run have access to electricity, or to generator power.

In addition to providing a waterfowl starter or chicken starter (non-medicated) feed to the ducklings in the brooder during the winter, they also need access to grit in order to digest their food properly.

Once the ducklings are two weeks old, you can provide them with small amounts of healthy treats AFTER they have finished their daily feed ration.

I highly recommend providing at least some of the natural treats they will be foraging for once they are introduced to coop life and go free ranging with the rest of the flock.

To help the ducks build up the body fat they will need to help keep them warm once they go from brooder to coop, I recommend giving the young birds protein-based natural treats like crickets, tiny feeder fish, crickets, and tadpoles.

Picking some grass and other safe to feed winter flora is also a great way to prepare the ducklings for leaving the brooder.

Raw oats and chopped up dandelions leaves tend to be a favorite of all the ducklings I have ever kept.

While the ducklings are in a brooder during the winter, talk to them and carefully handle them as much as possible.

Ducklings imprint on the first thing they see after hatching, in this case it will be its other brooder mates and you – not a momma duck … unless you have a large brooder and are also keeping the momma hen with her babies.

The more you handle and talk to the ducklings during their first few weeks of life in the winter, the easier it will be for them to trust you during free-range training, and when they are injured or ill.

"Hi! I'm Kendra. I'm a wife, mother, and homesteader. I love everything that has to do with simple living. I'm a canning instructor, an avid gardener, and a constant learner of old-fashioned skills. Here is where I share it all. Welcome to the adventure!"
The 12 Best Egg Laying Duck Breeds
Ancona Duck Breed Guide - Start Here
What You Can and Cannot Feed Ducks
Duck Language: How to Interpret Duck Behavior
Pekin Duck Breed Guide - Start Here