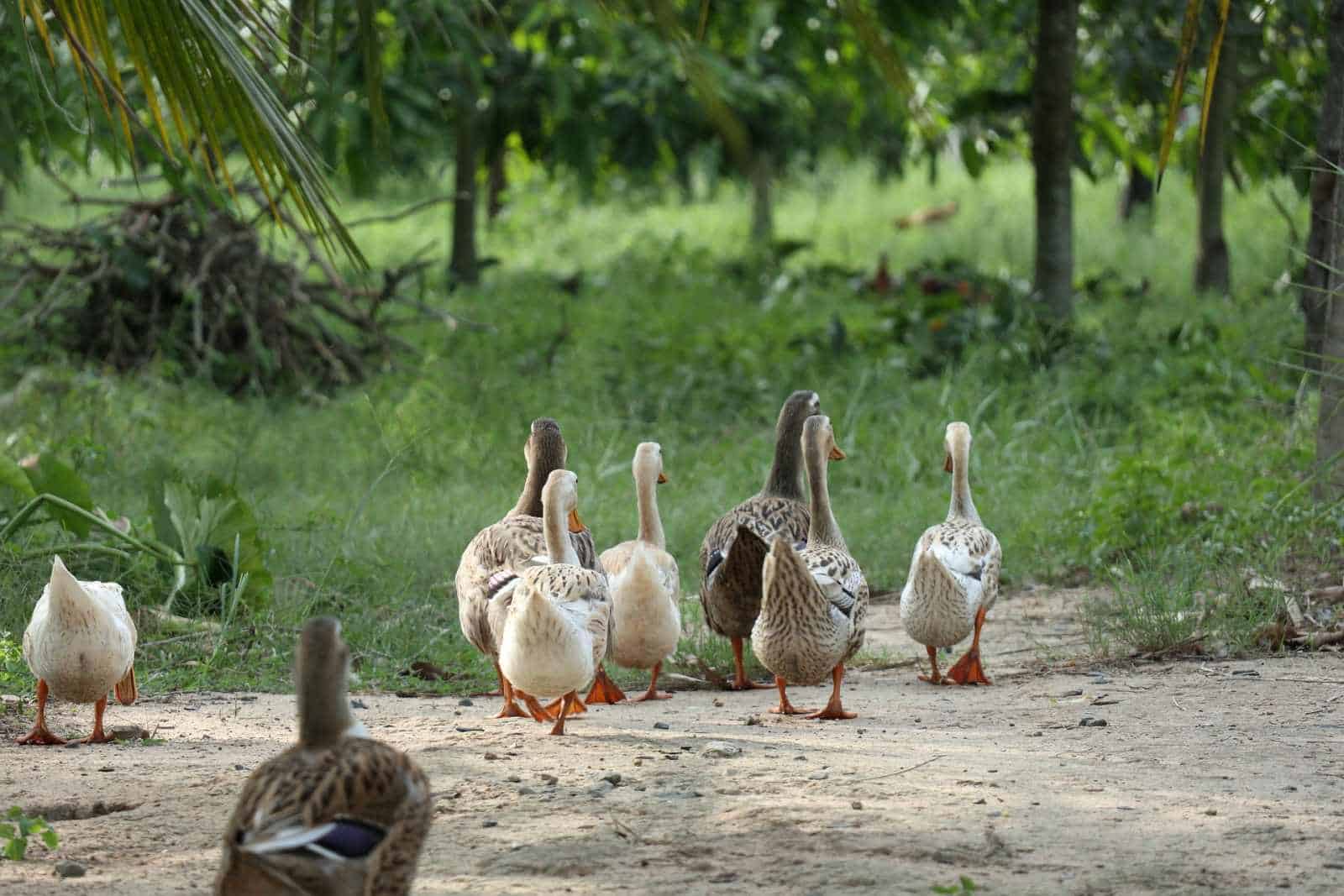 When I was a kid, we used to go to this place in Johannesburg called Zoo Lake. It was a tea garden with a park playground, and a popular picnic spot.

The highlight of these trips was always the lake itself, and the ducks and geese that called it home. We used to take bread, and throw breadcrumbs to the birds.

A few months back, though, I was reading an article that mentioned how you really shouldn’t be feeding ducks bread. Their bodies can’t process it properly, so it could make them very sick.

Not everything you feed a duck is good for it, so with that in mind, let’s look at 12 treats that can be safely enjoyed by your ducks!

Grapes are a popular snack; I know our horses used to love them – especially when they were frozen.

Ducks love grapes (who doesn’t?) and if you cut them in half, it makes it easier for them to swallow. They love both red and white (green) grapes so you can pick and choose which one you want to feed them.

Apples and pears are great for birds in general, but ducks tend to have quite a fondness for them. The core and seeds are removed, and the fruit is cut into small pieces which are easy for the ducks to munch on.

It should come as no surprise that ducks enjoy a few types of bugs and they’re not very picky about which bugs they eat.

They’ll typically eat mealworms, but will also go for mosquitoes, wasps, and spiders. When it comes to bugs, if your duck can grab it, it’s food.

Cherries are another sweet treat for ducks BUT they must be seedless and should be halved so that they’re easier to eat.

The seeds contain traces of cyanide (the same with apples and pears) which can be lethal in trace amounts. You should also never feed ducks maraschino cherries (the cherries you’d find on cakes).

The reason for this is that maraschino cherries often have high sugar content – thanks to the syrup/sugar in which they’re packed – which can be bad for your feathered friends.

If you’ve got oatmeal in your pantry, that’s another favorite treat for ducks. It’s a simple matter of cooking the oatmeal and serving it plain. The ducks love it! It’s a great snack for the winter when the temperatures drop.

They go moggy over the stuff and would probably eat it every day if they got the chance. They even eat the rinds – assuming they’ve been chopped up.

Marigolds have a few medicinal benefits for ducks, as they work as antibiotics, and may prevent a variety of diseases. However, ducks aren’t always too keen on them.

On the other hand, they are rather keen on dandelions and clovers – which are great for improving egg laying, improved digestion, and contain antioxidants.

Ducks eat fish in the wild and, so it makes sense to bring them into your domestic duck’s diet as well. They’ll also eat newts, and frogs.

A healthy supply of fish in your ducks’ pond can provide them with ample protein, and give you a bit of entertainment watching them eat!

Unfortunately, fish are a tad pricey so your bank account may not be too fond of them, even if your ducks are.

I know what you’re thinking: “That slimy stuff from the bottom of my pool is a treat?”

Well, not from the bottom of your swimming pool but yeah, algae is another snack which makes ducks moggy.

They love the stuff and it’s packed with proteins, vitamins, nutrients, and amino acids, making it healthy treat as well as a tasty one!

This is something I’ve actually seen and it’s hysterical! You drop a few crickets into your flock and wait.

The fun starts when the ducks spot and start chasing the crickets around trying to eat them – they get a workout before the treat!

Corn is a popular snack for ducks, and they can eat it as an everyday snack (in comparison to most of the others on this list which should be given in moderation).

Ducks love veggies in general, but this is a favorite of theirs. It can be given off the cob either cooked or uncooked (they’ll love it either way).

Caring for ducks, in general, is hard work – the same is true for all animals. That said, it’s also an incredibly rewarding experience when you get it right. All animals deserve to be at least a little bit spoiled; don’t you agree?

We have a joke in our home that we’re the Seebregts Hotel for animals because basically any animal that comes in either a stray or a rescue used to find their way to us. This led to another joke that we’re the worst foster families ever because we tend to keep our ‘fosters’ permanently.

In closing, I’d like to say thanks for reading. I hope you found the article informative and enjoyable. Now go forth and pamper your ducky friends and I’ll see you for the next one. Take care!