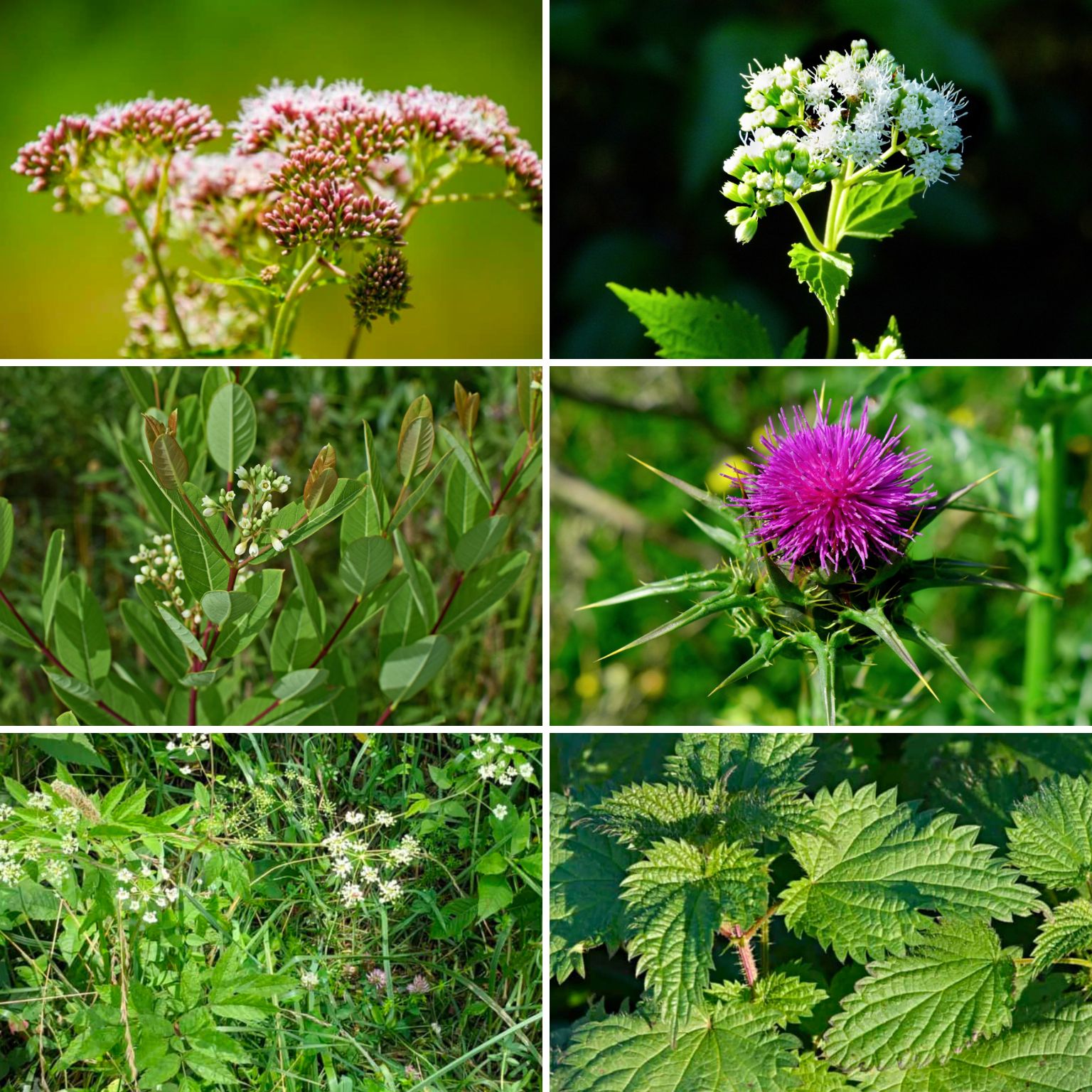 There are many wild plants that can be eaten safely and provide important nutrients for our health. Wild lettuce is one of the most common, and also one of the most beneficial from a health standpoint.

However, there are also a number of poisonous plants that look very similar to this safe plant. Each of these plants contains toxins that can make you gravely sick, or even pose a lethal danger.

For that reason, you must be careful, and do your research before eating any wild plants! In this article, we will take a look at six such dangerous plants that you need to watch out for when foraging for wild lettuce.

How to Identify Wild Lettuce

Mature wild lettuce is a tall, leafy plant that can grow up to six feet in height. It has dark green, serrated leaves that spread widely with a purple flush to the stems and small, white flowers.

The plant is native to Europe but it can now be found growing in many parts of the world and across North America.

Wild lettuce is a rich source of vitamins A, C, and K, as well as calcium and iron. It also contains a compound known as lactucarium, which has mild pain-relieving properties.

As a result, wild lettuce can be a boon for people in the wilderness, and used to treat a wide variety of ailments. In addition, wild lettuce is said to boost the immune system and promote gut health.

When identifying wild lettuce, it is important to look for these distinctive features. In addition, the plant has a distinctively pungent odor, so if you come across a plant that smells bitter and slightly noxious, it is likely to be wild lettuce.

If you are unsure whether a plant is wild lettuce, it is always best to consult with a qualified expert before you risk consuming it.

The Dangers of Poisonous Lookalikes

If you’re planning on foraging for your dinner or for a medicinal plant like wild lettuce, it’s important to be able to tell the difference between it and its poisonous doppelgangers.

Eating the wrong plant can lead to nausea, vomiting, and in extreme cases, death.

While there are many edible plants out there, there are also a number of poisonous plants that resemble their harmless cousins at various stages of life, and telling them apart may require expert knowledge.

For example, the water hemlock looks very similar to wild parsnip, but consuming even a small amount of water hemlock can cause seizures and total respiratory failure.

Similarly, the small white flowers of the wood sorrel may look like those of wild lettuce, but this plant contains oxalic acid, which can cause kidney stones and gastrointestinal problems in large quantities.

So before you go foraging for some wild lettuce, make sure you know exactly what you’re looking for, and more importantly what you aren’t. Otherwise, you might pay with your life.

Watch Out for These Dangerous Lookalikes

The following plants all have characteristics that could lead to the being mistaken for wild lettuce at varying stages of their development.

Milk thistle is a flowering herb that is native to Europe, North Africa, and the Middle East. The plant gets its name from the white veins on its leaves, which are said to resemble drops of milk.

This dramatic herb is easily recognizable thanks to its large, distinctive flowers. The blooms range in color from pale pink to deep purple, and each one is adorned with a prominent black dot in the center.

The glossy leaves are also hard to miss, as they typically measure 4-6 inches in length.

Milk thistle is sometimes used sparingly as an herbal remedy for liver and gallbladder problems, but it can be poisonous if ingested in large quantities thanks to the presence of mycotoxins. Symptoms of milk thistle poisoning include vomiting, diarrhea, and abdominal pain.

Milkweed is a perennial herb that grows to a height of about three feet. It has long, lance-shaped leaves and small, clustered flowers that range in color from greenish-white to deep pink.

The plant gets its name from the milky sap that flows freely from its stems when they are cut or broken.

This North American native is often found growing in fields and along roadsides. Milkweed is sometimes used as an Old World herbal remedy for coughs and colds, but it can also be quite poisonous if consumed in large quantities.

The toxins, cardenolides, can cause vomiting, diarrhea, irregular heart rate, and seizures.

Poison Hemlock is a member of the wild carrot family, and it shares many features with its non-toxic cousins.

It can grow to be up to six feet tall, and its leaves are large and triangular in shape. The stem is green or reddish in color and it is covered in small white flowers.

However, Poison Hemlock is easily distinguished from other members of the carrot family by its distinctive odor.

When crushed, the leaves release a rank smell that has been likened to rubber or mouse urine.

This unpleasant odor is due to the presence of coniine, a potently toxic alkaloid that can cause paralysis and death if ingested in even small quantities.

On average, eating just 6 leaves of poison hemlock is enough to kill a healthy adult human.

Consequently, Poison Hemlock should be avoided at all costs, as even touching the plant can result in skin irritation.

Stinging nettles are yet another towering perennial herb that, like wild lettuce, can reach upwards of six feet in height.

The stem is reddish or green, and is covered in small, delicate and sharp hairs.

The leaves are alternate, lanceolate, and have serrated margins. They are dark green on top and lighter green on the bottom.

The flowers are small, greenish-white, and occur in clusters. The fruit is a small, dark brown seed.

Whenever the leaves or stems are brushed or touched, the needle-like hairs puncture the skin and release a potent cocktail of histamines and other chemicals that cause dermatitis and a ferocious burning sensation on the skin.

This plant is found throughout Europe, Asia, and North America, and intermediate stages may be mistaken for wild lettuce.

Happily, stinging nettles are not wholly poisonous, as a long soak in water or cooking will neutralize the toxins. This makes them safe (and highly nutritious!) to eat.

To the naked eye, dogbane is a seemingly innocuous herbaceous plant: an unremarkable perennial plant that typically grows to be between two and four feet tall.

It has long, narrow leaves that are arranged in pairs along the stem. The flowers are small and white, growing in clusters of three to eight.

The fruit is a slender pod that contains numerous small seeds. While the plant is native to North America, it has now been introduced to Europe and Asia.

But don’t let its understated appearance fool you; this plant is actually quite deadly.

All parts of the plant contain a toxic sap that can cause skin irritation, vomiting, and if ingested, cardiac arrest!

The sap is so poisonous that it was once used as a method of poisoning arrowheads by North American Indians. Needless to say, if you eat this one, you are probably done for.

Dogbane is often considered to be a nuisance plant, as it can quickly spread and choke out other plants.

However, it also has a number of uses for the clever survivor, so long as you don’t mistake it for wild lettuce. The fiber from the plant’s bark can be used to make strong rope.

Despite its benefits, dogbane remains a dangerous plant that should be avoided by anyone who is not an experienced naturalist.

Snakeroot is a plant that got its name from resemblance it has to a rattlesnake’s tail.

The plant was also used by Indian tribes as a method of treating snakebites, which is another factor contributing to how it got its name.

It’s a perennial plant that produces white or pink flowers, blooming in the summertime.

The leaves are opposite, oval-shaped, and have serrated edges. The plant can grow up to two feet tall and prefers shady, moist, rocky habitats.

Snakeroot is native to North America and can be found in woods and meadows from Canada all the way down to Georgia.

Crushed snakeroot leaves have a minty smell and were once used as a folk remedy for colds and fever, and its essential extracts are still harvested for herbal remedies to this very day.

However, the compounds and oils that provide snakeroot with its medicinal qualities when eaten in small amounts can also lead to explosive, violent vomiting if you ingest too much.

This plant is a great example of a helpful plant turning harmful when you overindulge or eat it carelessly.

As you can see, there are a number of plants that look very similar to wild lettuce, but most don’t share its beneficial properties and several are deadly if eaten.

So before you go out foraging for wild lettuce, make sure to do your research and know what to look for so you don’t end up with a terrible stomachache or worse.

"Hi! I'm Kendra. I'm a wife, mother, and homesteader. I love everything that has to do with simple living. I'm a canning instructor, an avid gardener, and a constant learner of old-fashioned skills. Here is where I share it all. Welcome to the adventure!"
How to Identify Goldenrod (Plus Look-Alikes)
I Found A Wild Pawpaw Tree!
How To Harvest And Preserve Wild Onions
Foraging and Using Japanese Knotweed
Is White Snakeroot Poisonous?