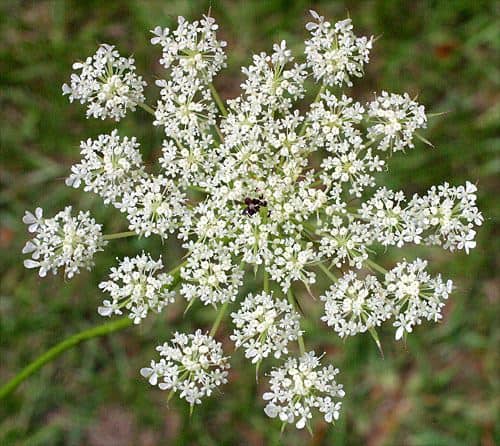 As I was weeding my flower bed one day, I noticed that one particular weed looked remarkably like a carrot top. I even questioned whether it was possible for some of the seeds from my garden to have been carried over and dropped in with my flowers. And then when I pulled the weed and smelled the thin root, it smelled exactly like a carrot!

Was it a carrot?

I took it inside and googled “wild carrots”. Sure enough, that’s what it was! And yes, they are edible!

But it surprised me to learn that these are actually immature Queen Anne’s Lace plants. First year growth doesn’t develop a flower head, and the whole plant is good to eat. Once they get their distinct umbrella shaped white flowers on top, the flavor becomes woody and is no longer desirable.

I recognized these flowers from being all around our property. My dad always called them Chigger Bushes, because of the little chigger bugs that jump off of them and cause itchy bites. We were always warned to stay far away from these blooms. But hey, if they’re edible I’ll take my chances! Besides, a little clear nail polish over the bites is all it takes to kill the burrowing insect.

In my reading, I also learned a very important tip. Queen Anne’s Lace has a deadly look-alike, Hemlock. Even touching Hemlock can poison you, and ingestion means almost certain death unless treated immediately. As the toxins from the plant absorb into your system, you slowly become paralyzed, your respiratory system fails, and you die.

Terrible. I know. So you definitely need to know how to distinguish between the two plants.

Fortunately, there are several very clear differences between Queen Anne’s Lace and Hemlock. It’s pretty easy to tell them apart once you learn what to spot, so don’t be afraid to try!

Yesterday, I took the kids on a nature walk so that I could teach them how to properly identify Queen Anne’s Lace and to be able to distinguish it from Poison Hemlock. It would be terrible if the kids spotted some hemlock and picked the flowers thinking they were beautiful. We weren’t able to find any on our property, thankfully, but it’s always good for them (and myself!) to know the difference.

Although they both have umbrella shaped tiny white (or sometimes pale pink) clusters of flowers, Queen Anne’s Lace has a teeny tiny purple or crimson colored flower in the center of its blooms. See it in the picture? It isn’t always there, sometimes it has already withered, or hasn’t developed yet. But if you see this, you know for sure it’s Queen Anne’s Lace.

The story goes that Queen Anne was making lace when she pricked her finger and a drop of blood fell into the middle of her work, this is how the plant got its name. Telling the story is a good way for kids to remember which plant is supposed to have the purple flower.

Hemlock looks a bit different, when you get close enough to really get a good look. Though it would be hard to accurately tell the difference every time by only looking at the blooms. Thankfully, the stems are a dead giveaway.

Queen Anne’s Lace has a hairy, completely green stem. Poison Hemlock is smooth, and has purple or black spots, or streaks on the stem.

Another identifier is the way the plants look when the blooms are dying back. Queen Anne’s Lace will fold up like a bird’s nest.

Hemlock will not fold up as it goes to seed, but will just turn brown instead.

But the REAL test is the smell. If you’ve found a flower and you are fairly certain that you’ve identified it as a Queen Anne’s Lace, the final test is to crush the stem a little then smell. If it smells like a carrot, you can know for sure that it’s Queen Anne’s Lace, and it’s safe to eat. If it stinks, or has a musty/yucky smell, go wash your hands, it’s possible that the plant is Hemlock.

So, once you’ve determined you do in fact have Queen Anne’s Lace, or “wild carrot”, how do you use it?

“Stems may be cut into sections and used for flavoring in stews and soups. Buds may be sauteed in oil. The brown dried seeds are an excellent salt substitute.”

According to Linda’s Wild Foraging Cards, you can use wild carrots in the following ways:

Would you be interested in foraging for wild carrots? Do you know if you have any Queen Anne’s Lace growing in your area?