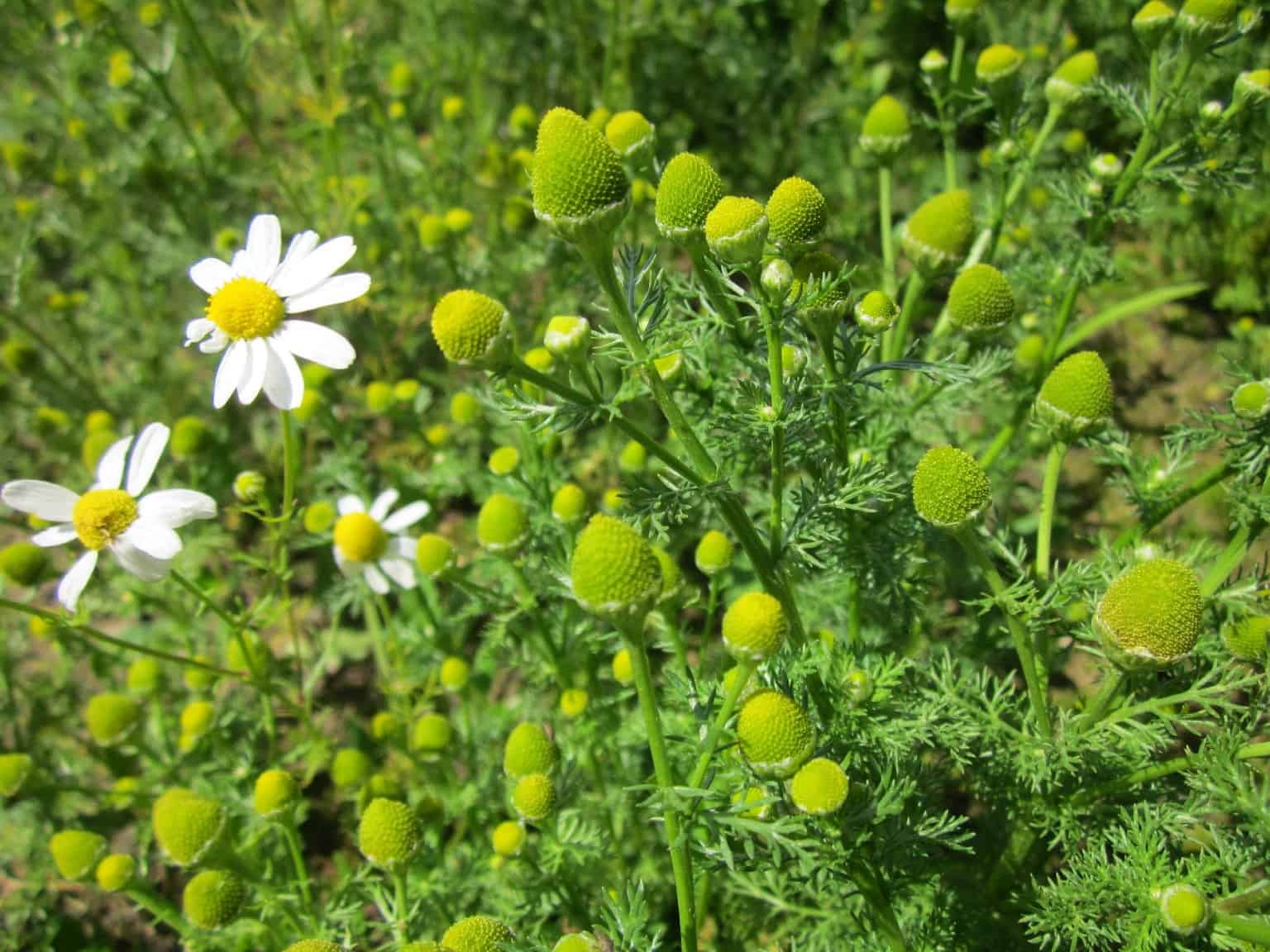 Pineapple weed plants are often a beautiful little overlooked “weed.” While they look a lot like their cousins, chamomile, a little whiff of a pineapple weed head crushed between your fingers rapidly allows you to properly identify this wild edible.

The pineapple weed plant (Matricaria discoidea) somewhat also resembles mayweed (A. Cotula), but unlike the sweet scent, you distinctly smell when crushing a pineapple weed head, when you crush the similarly looking mayweed head a fetid and stinky smell with equally quickly fill your nostrils.

Pineapple weed is a member of the aster family, just like sunflowers, daisies, and dahlias. This edible weed boasts an orb-style head that roughly resembles the same broad cone share of a pineapple.

The head is a shade of yellowish-green. Once the ralike petals of the pineapple weed plant are plucked away, the center of the head somewhat resembles the center of a daisy.

Pineapple weed is also known as either “wild chamomile” or “false chamomile” due to the similar appearance and historic natural remedy uses of both plants.

Real chamomile (Chamaemelum Nobile) has dainty white flower petals, but pineapple weed does not have any petals around the flower head.

While true chamomile does produce a lovely scent, it does not have the distinctly fruity smell of pineapple weed.

Typically, you will find pineapple growing naturally in either rocky or compacted soil.

Because this weed loves compacted soil and is so small, it is often discovered along the edges of driveways, roads, sidewalk cracks, and the edges of buildings.

It is an extremely hardy plant that is often the only foliage found growing in an inhospitable area.

Pineapple weed is most often described as looking like wild chamomile without any leaves. It grows closer to the ground than chamomile.

Never forage pineapple weed or any plant that you are not 100 percent certain has never been treated by chemical sprays or on land where you do not have permission to visit or forage.

This wild plant does not have any known toxic look-alikes.

It is the cone-shaped head of this wild weed that is the most used and valuable portion of the plant. Pineapple weed can be either raw and fresh or dried or cooked.

The most common nutrients found in pineapple weed include geranyl isovalerate, myrcene, germacrene, as well as several glycosides and tannins.

How To Harvest And Dry Pineapple Weed

Pineapple weed can be harvested any time after it develops a mature head that releases the sweet scent when crushed between your fingertips.

Young flower heads are far more sweet and tasty than older heads that are picked in the late summer. The flower heads are more yellow when they are young and turn to a greenish shade as they age.

Snip off the top of the flower head, leaving as much as the green foliage underneath intact as possible.

To dry pineapple weed, you can merely spread the plants out on a screen or tray in a warm and sunny spot for several days, or place them in a dehydrator on the herbs and nuts setting (about 140 degrees) for approximately four to five hours.

Placing pineapple flower heads onto a baking sheet and putting them in the oven on the lowest temperature setting for two to four hours can also be used as a drying method.

How To Grow Pineapple Weed

The average number of seeds per pineapple weed plant ranges from roughly 850 to 7,000. The weight of about 1,000 seeds is just around 0.13 a gram. It is extremely unlikely you will be able to purchase pineapple weed seeds in any conventional nursey or catalog.

Forage for the plant and then dry the flower heads to garner seeds to plant.

Shake the seeds loose once it is fully dried and store in a cool dry place in a Mason jar or mylar bag until ready to plant.

Plant the seeds by scattering on top of compacted or rocky soil or covering just slightly with loose dirt. Placing the seeds on the soil or up to 10mm deep in a sandy loam type of soil is highly recommended.

Naturally sown seeds in a field or outdoor area may start to emerge as early as February. The peak growing time for pineapple weed seeds in an outdoor environment is from March to May.

A second planting completed in August through October can provide another robust yield of the plant unless an early hard frost hits your growing region.

Plants that emerge early in the spring tend to cycle through a longer vegetative state before entering the flowering stage of the growing process.

Pineapple weed plants that emerge from the ground later in the year (middle of May through mi-July, typically) reach the flowering stage in around 40 to 50 days.

Regardless of when the pineapple weed seeds go into the ground, they all go to seed and die off before winter – unless planted in August or later.

Plants stemming from this late in the year planting may winter over in a vegattive rosette state and can flower in the following spring.

Once a pineapple weed seedling boasts two to six leaves, it should be able to tolerate transplanting or thinning as needed.

Seeds from these plants are dispersed by wind, splashing rain, and in mud – even mud on the tires of a vehicle that contains pineapple weed seeds can cause dispersal of potentially viable plants.

Pineapple weed is hardy in USDA Agricultural Growing Zone 5 to 9.

Being a wild plant that is far too often deemed nothing more than a useless weed, there is no published information about typical plants and diseases that pertain exclusively to the pineapple weed plant.

They are exceptionally hardy that do not seem deterred by times of drought, flooding, or excessive moisture.

To better ensure that any pineapple weed plants you are attempting to start or protect, be on the alert from the most common flower and garden plant pests: aphids, leaf miners, beetles, earwigs, fungus gnats, cutworms, and mealybugs.

While the USDA has not approved pineapple weed as a medicine of any type nor validated claims of its use to treat or prevent any type of a health issue, it has been praised by users for its analgesic, antibacterial, anthelmintic, and antimicrobial properties.

Tribal members also often used this wild weed as an ingredient to make a type of perfume, as a preservative, to repel insects, and as a ceremonial plant in both sweat lodge and sun dance rituals.

For thousands of years, both Native Americans and the indigenous people living in Northeast Asia have used pineapple weed in natural remedies.

In addition to providing tea made from the heads to a person suffering various types of ailments, they also used the infused weed topically as a salve.

To make a salve with pineapple weed, the flower heads are infused (soaked) in a carrier oil (such as olive, coconut, or almond) to extract the essential oils they contain.

Pineapple weed infusions have frequently been applied to the skin to address common skin issues such as eczema, insect bites, psoriasis, and to help reduce the appearance of wrinkles.

Tea is the most common way pineapple weed has historically been used not just as a naturally sweet treat, but also in herbal remedies.

To make a deliciously sweet pineapple tea, simply steep a handful of flower heads (the younger they are the sweeter they are) in hot water for five to 10 minutes.

The leaves of the plant are edible as well, but have a more bitter taste and are rarely used in the making of tea with this wild edible. Drinking pineapple tea to address insomnia is one of the most popular ways it is used.

A cooled tea has also been used to make a compress to use the pineapple weed topically on minor wounds and rashes.

In addition to being a primary ingredient in an herbal tea, pineapple weed is also frequently used in making cordials, liqueurs, and baking recipes. Pineapple weed salad is perhaps the simplest way to use this wild edible on the dinner table.

There are two ways pineapple weeds are commonly used in salads. First, you can simply wash the flower heads after harvesting and toss them fresh into a leaf or fruit-style salad.

Second, mix equal amounts of pineapple weed syrup, balsam vinegar, and olive oil, with a pinch of wholegrain mustard (optional) and drizzle over either a traditional leaf-based salad or even over cold cuts for a little extra flavor.

Side Effects And Warnings

While pineapple weed has been used to naturally address breast milk production in nursing mothers, it is not recommended for consumption or use by pregnant women.

Simply because a plant is natural does not mean it is safe for everyone to consume or even use topically.

While pineapple weed is largely deemed safe to consume, some people can have an allergic reaction or suffer side effects from either consuming or using it topically.

The most common side effects experienced include an allergic skin reaction, inflamed skin, or an upset stomach.