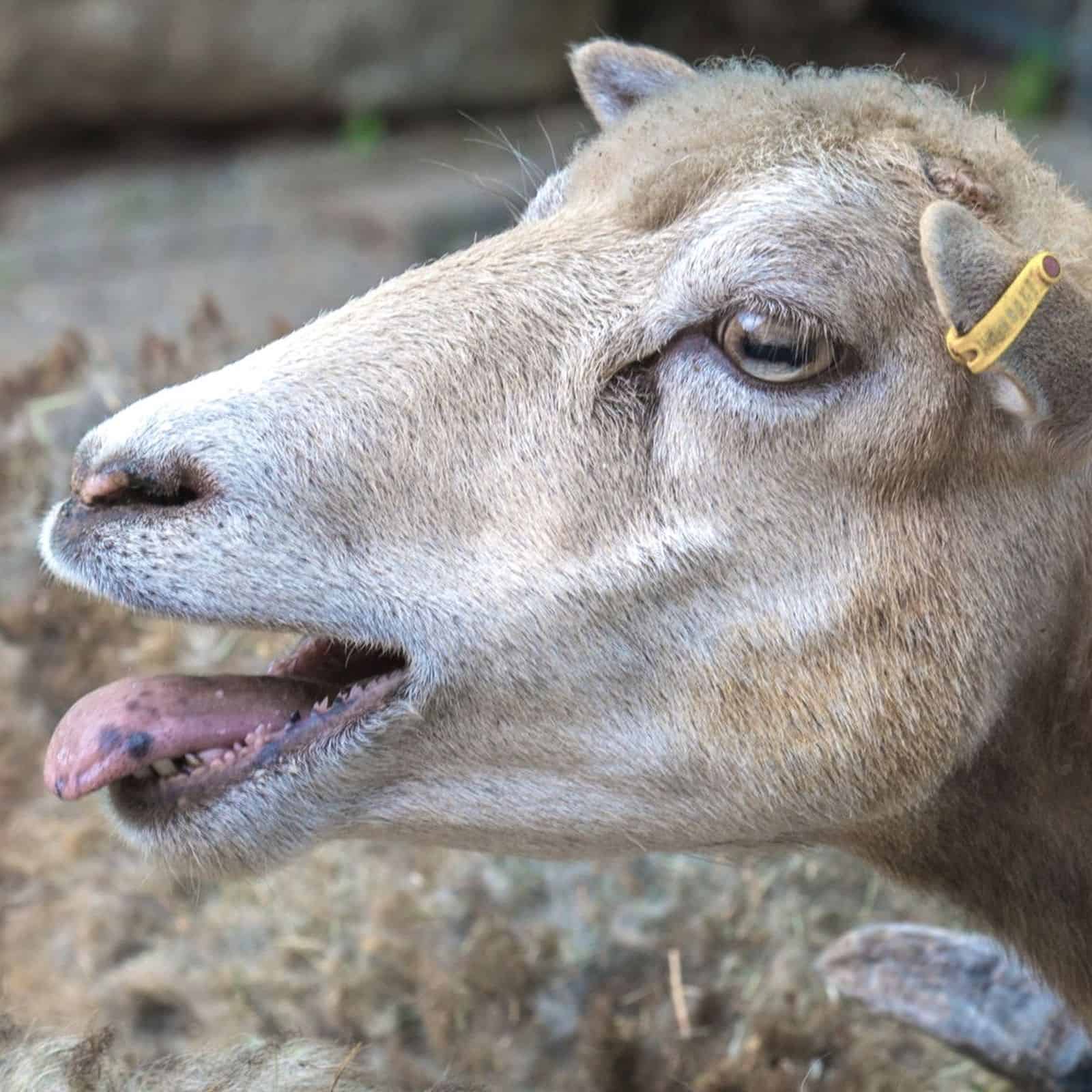 There’s a danger on the farm that many of us aren’t aware of – and it comes in the form of an aggressive sheep.

Yes, a sheep. That information might surprise you – after all, aren’t lambs supposed to be cute, cuddly, and wooly?

While sheep are hardly apex predators, they can be dangerous when threatened – especially the rams.

Fortunately, there are some steps you can take to prevent (and survive) a dangerous and aggressive sheep from attacking. Here’s what you need to know.

Why Are Sheep Aggressive?

For the most part, sheep are only aggressive when they aren’t handled well by humans.

There are a few situations in which a sheep can still be aggressive though, regardless of how well or gently you handle it.

Like other animals and people, the genetic makeup of sheep (particularly rams) can play a big role in how aggressive or friendly they are. Some family lines are just more aggressive than others.

Now, that doesn’t mean that just because an animal is from an aggressive family that it will automatically be aggressive, too – however, it has an increased potential to be.

Other situations outside of human interaction that can cause animals to be more aggressive are certain times of the year.

The amount of contact that you have with your sheep can influence how aggressive they are, too.

Try to interact with and handle your animals as much as possible – but be mindful that with lots of human contact and interaction, rams and ewes can lose their fear of humans and become aggressive.

Not only that, but sheep that are not raised with other sheep can fail to develop the social skills they need. This can cause them to become aggressive as well.

Most rams, in particular, will eventually try to challenge the “top ram” (you) no matter how friendly they are when they are young. You’ll want to carefully monitor all animals early on in their lives to make sure they don’t get aggressive as they get older.

Some people have an attitude of “my animal will do whatever I want it to, when I want it to.” Some people are more aggressive than others, and this is often reflected in how they handle animals.

Work with your animals often so that they get used to your presence – and so that you can come up with effective strategies for getting them to do what you want or need them to without causing them to become aggressive.

How Do Sheep Protect Themselves?

Again, sheep aren’t naturally antagonistic. Most of the time, they’ll only attack or show aggressive behavior if they feel threatened.

Sheep have good senses and know when a threat is amiss. They may do any of the following:

They may also simply run away. Remember, sheep prefer to keep their distance. They’ll only become defensive when they feel as though they have no other option.

How Do You Calm Down a Sheep?

Here are some strategies to help you deal with an aggressive sheep – and to both prevent and ward off an attack.

While a one-time incidence of aggression isn’t necessarily anything you need to worry about, if you have animals that are repeatedly acting in an aggressive fashion, you need to remember that they are a liability to your farm.

Not only can these animals harm you, but they have the potential to harm visitors to your farm, too. You’ll be held liable, both personally and financially, if anything should happen to anyone.

You may wish to remove overly aggressive sheep – particularly rams – from the flock.

In some cases, this might not be possible or practical. For example, a high-value purebred ram might produce such high-value offspring that you really don’t want to take him out. Fortunately, there are some other steps you can take.

Set up your ram’s pen so that you don’t have to enter it to feed him and water him. When you do have to handle him, do it in a small pen and have someone help you. Use panels or folding hurdles to catch him whenever you need to – don’t try to make friends with him.

If you have a truly aggressive animal who has displayed signs of aggression regardless of your best efforts to curb the behavior, the fact of the matter might just be that you’re not going to be able to do anything to rectify the situation.

You’ll need to turn to avoidance in order to keep yourself safe!

That being said, if you decide to keep him separate, know that he should not be mistreated but instead, still cared for properly. Just don’t trust him and don’t turn your back on him.

Aggressive sheep should never be taunted or teased – that sounds obvious, but it’s worth mentioning because so many producers still do it.

Don’t ever turn your back on a ram and keep distance between you and him to make sure you can see an attack coming.

Don’t try to make the animal into a pet, either. If it’s aggressive once, there’s a good chance that it will be aggressive for life.

If you have other people working on the farm with you around an aggressive animal, make sure they’re all trained properly to know how to prevent and deal with an attack. Everybody should be informed about the aggressive animals’ potential to attack.

The flight zone is the term for how close you can get to an animal before it starts moving. For some sheep that haven’t been handled often or worked in a while, they will likely have a larger flight zone.

Keep your sheep’s flight zone in mind as you approach it – this can also give you an indication of when or if a sheep is about to attack.

6. Know How to Catch Sheep

When stressed, sheep are far more likely to exhibit aggressive behaviors. One mistake that many people make when handling sheep is chasing them around the yard.

Don’t chase. It’s tiring and dangerous – and shapes that are chased will become even more difficult to work with.

Instead, use a leg or neck crook so you have a longer reach to catch sheep. This is ideal for sheep with horns.

Get the sheep into a corner, and extend your arms to make a visual barrier. Approach slowly and calmly.

Remember catching sheep is much easier in a pen and if a sheep is part of a mob instead of by itself. Whenever possible, use gates and hurdles to shorten the pen and reduce the amount of stress that’s placed on your sheep. Again, this can reduce the likelihood of aggressive behaviors.

When you walk with your sheep, hold it against a fence and grasp it with your knees and a hand under the chin. Control the sheep with pressure from your knees. Do not pull it along by the wool or by its horns.

If you need to work a sheep in a seated deposition, rump it. You’ll hold the sheep against your knees with a hand under its chin and one on the rump.

Gently turn the sheep’s head to its rear with one hand while forcing the rump down with your other hand. Once it’s no longer standing, lift the front leg and sit the sheep down.

Dogs can be helpful in controlling sheep and preventing an attack because they can help herd the animal more effectively and reduce the amount of stress caused by the handling process.

If you use dogs, though, make sure they are well-trained and that your sheep are used to their presence to avoid defensive acts of aggression.

Remember, calm sheep are far less likely to be aggressive than stressed ones. Handle them quietly and calmly and don’t be aggressive with them in return. Make sure they can always see and hear you and never use electric prods to encourage them to move.

Drop gates are helpful tools to have on a sheep farm, especially when working with aggressive rams. A drop gate, when positioned properly, can reduce the hazard of working with rams.

Especially when working around sheep with horns or rams, never lower your head. The natural defensive maneuver of a sheep is to charge and butt. You can reduce your likelihood of injury by keeping your head up and keeping a clear view of the sheep at all times.

If you drop something and need to pick it up, don’t bend over. Instead, squat, and keep your eyes on the ram at all times.

11. Leave Their Heads Alone, Too

While you might view a head scratch or pet as an affectionate action, sheep don’t necessarily think the same thing.

Rubbing a sheep’s head – particularly a ram’s head- is generally viewed as a threatening display and show of aggression. This can cause a sheep to attack.

12. Pay Attention to Your Position

Stay on high ground when working sheep. You’ll have the best view and you won’t have to worry about a ram coming up on you from behind.

Don’t place yourself between an ewe and her lamb. While there’s a chance that she will run, you may also find yourself in the middle of a conflict.

Keep your eyes on an aggressive sheep at all times. Even if a sheep has never before shown signs of aggression or if it has been a long time since they acted out, these behaviors can often come seemingly out of nowhere.

You need to be prepared – and having your back to the animal is not a good idea.

13. Defend Yourself From a Ram

Ewes typically won’t charge humans unless you stand between them and their young. What you have to worry about, however, is ram charging.

If you see a ram backing away from you, walk toward him. If he’s backing away, this usually means that he’s about to charge. Don’t run toward him and don’t run away from him.

You may want to wave a stick at him as he charges. This may distract him enough as he considers his next move. If he lunges or dodgers to the side, hold your ground – you can duck away at the last minute.

Again, don’t try to outrun the ram. Sheep can run up to 40 miles per hour. As the ram approaches you, there’s a good chance that it will buck up on its back legs- you can dodge to the side as it does this and it will butt its head against nothing but air.

Once you’ve thwarted that first attack, try to catch the aggressive animal and wrestle him to the egg round. If you can get him into a rumped position, he won’t be able to headbutt you.

Survive a Sheep Attack – and Prevent it From Happening

These tips should help you prevent and deal with a sheep attack should it occur.

Sheep can be dangerous, but with a little preparation you can survive an attack.

Be sure to consider our tips on how to survive a dangerous and aggressive sheep – with the right skills in your arsenal, you’ll be able to keep yourself and your flock safe from harm.