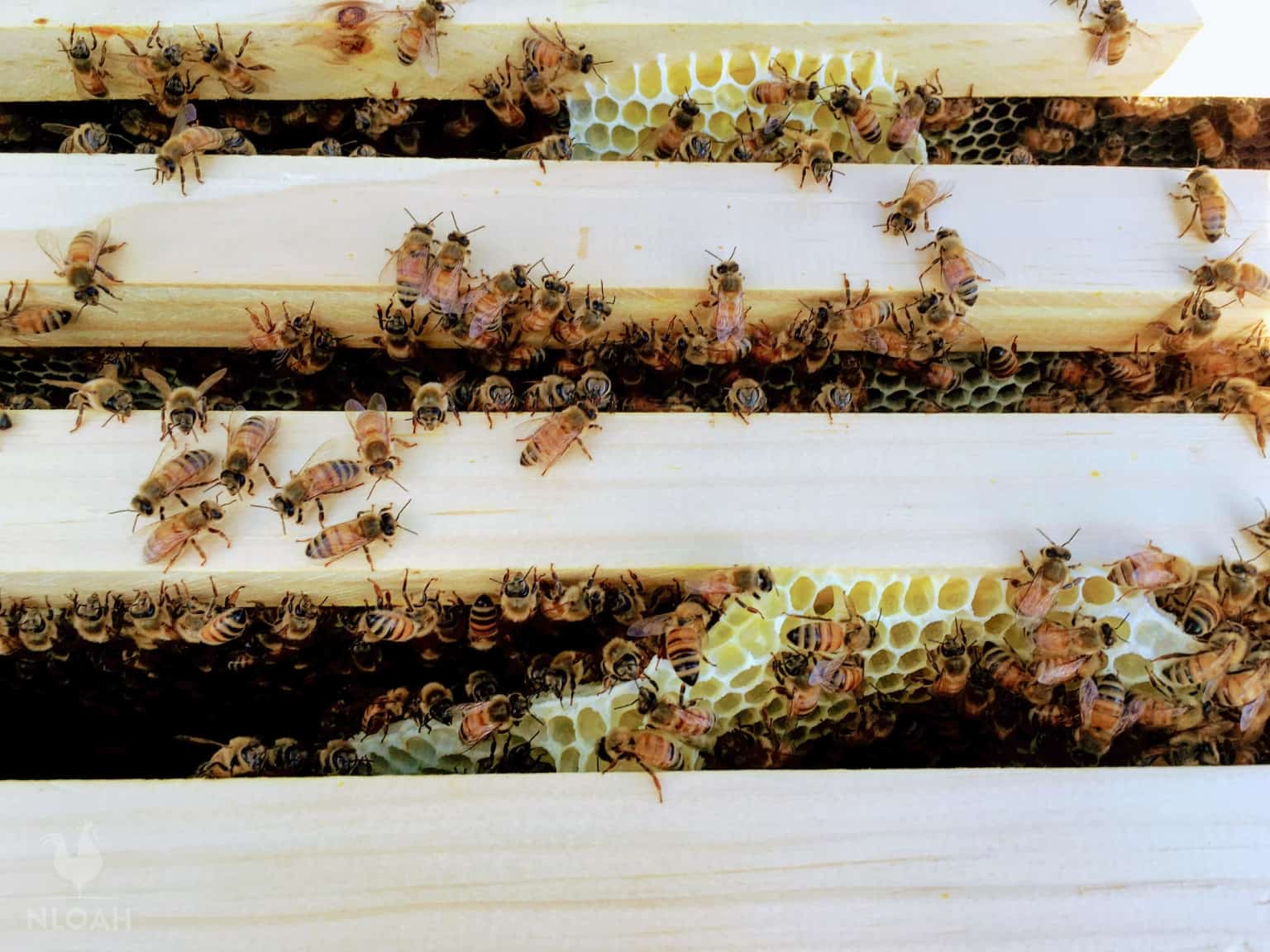 Keeping a caught swarm of honeybees from leaving can seem like a daunting endeavor, but following a few simple steps you should have the wild bees making honey and wax for you in short order.

Spring is the typical time that you can most easily spot a swarm of honeybees, although it is possible to encounter a bee swarm from spring through the fall. If you are fortunate enough to catch a swarm during the spring, it is often easier to get them to acclimate to colony life inside of a man-made hive.

Catching bee swarms is exciting – it is hard to beat free honeybees that are already thriving in your native climate. Yet, catching a swarm of bees is only the first step in the process.

Extreme disappointment is lurking around the corner if you do not follow proper beekeeping protocol after bringing the wild bee swarm back home.

Why Do Wild Honeybee Swarms Choose To Leave?

Honeybees are transient little pollinators. They tend to move about even after settling on a seemingly perfect location to cultivate a successful colony.

Wild bees have hardly any time invested in setting up a home space, so there is little draw to remaining there indefinitely if their new home base does not suit them.

The swarm of honeybees were moved without their comb, food stores for the winter months, or even their brood in most cases.

To keep a caught swarm from instantly taking flight and leaving their new home on your homestead, make their transition as smooth and enticing as possible.

When the caught swarm is moved gently, calmly, smoothly, and quietly, they are less likely to be agitated to work with when installing them in the hive and in a better little honeybee state of mind once inside.

Some beekeepers use a homemade or commercially-manufactured vacuum system to catch swarms. I personally would not recommend this method, even though it keeps newbies at a safer distance from the swarm, because of the “trauma” it can cause the honeybees.

The noise alone, even from vacuum systems that are billed as being nearly silent in nature, can vastly agitate the bees and cause them to swarm again – far out of your reach.

Gently brushing the caught swarm into your waiting nuc box methodically with swift yet smooth actions yields far less stress to the honeybee you want to start keeping.

Check out the video below to see a caught swarm being moved inside of a temporary nuc box to their new home:

Trick The Bees Into Thinking Relocating Was Their Idea

If you have a beehive box or nuc box (especially one that was previously used and still have comb on frames inside), you may be able to merely entice the bees inside without ever touching the swarm at all.

Once the swarm notices the nice new digs awaiting them nearby, they sometimes (emphasis on sometimes) decide to relocate to the box all on their own.

If you are lucky enough to have this happen, just calmly, quietly, and quickly shut the box once you are sure the queen and the bulk of the bees have gone inside. As dusks starts to set in, all of the honeybees will have joined their queen in the new box.

Catch And Move The Swarm At The Right Time

Catching the bees during the afternoon hours gives them time to get acclimated inside the hive just prior to their usual “get indoors” time before the sun sets.

Moving the swarm after dark should deter the bulk of the bees from attempting to come back outside and see what is going on and fly away from the nice new home you are attempting to provide them.

It is also a very good idea to use “nuc netting” to prevent any honey bees that fly outside of the beehive box or temporary nuc box.

This is basically a white mesh drawstring bag, built similar to a laundry bag, that prevents any bees that meander outside of the nuc or hive box, to escape.

Honeybees are a lot like thrifty humans – they don’t see any sense in waiting for something new to come along when a quality used item is readily available.

Most, if not nearly all, beekeepers who cach swarms will tell you that a previously used nuc box or hive will work best.

These potent pollinators have an amazingly well tuned sense of smell. A used nuc or hive box that has the lingering aroma of propolis and beeswax.

This smell is like a welcome mat for the new additions and truly goes a long way in enticing them to settle in for the long haul and not swarm away to find a better home elsewhere.

Wearing protective equipment and using a smoker if necessary, will help protect the beekeeper when relocating bees – while keeping them calm at the same time.

Place used frames with empty honeycomb inside of the hive box to help make the caught swarm feel instantly comfortable. A used hive with resources already in place is like lucking into an expertly furnished new home, for honeybees.

If at all possible, include at least a single frame of open brood from another one of your beehives. While moving brood is going to temporarily irritate the members of your other established colonies, it will increase the likelihood of the caught swarm of honeybees staying put exponentially.

The open brood frame will emit potent pheromones and calls to the adult nursing bees to come care for them. Honeybees make superb adoptive parents if you have the resources to set them up with a brood to foster.

Resist the strong urge to go check on your caught swarm of honeybees for at least seven days.

Trust me, they do not need your help getting right to work pollinating plants and making honey and comb. The only thing your presence will do is irritate them as they are attempting to get comfortable in their new surroundings.

If they decide to swarm again and leave, you would have to be incredibly lucky to catch them in the act and begin work on attracting them back again – such a scenario would likely be successful anyway.

Once the caught swarm has been introduced to the new hive for a full week, go check on them. Lift the lid while having a smoker going at the ready in case they are exceptionally high strung and still out of sorts.

By this time, they should be heavily invested in making honey, comb, and tending to the brood or establishing their own brood.

Make Sure They Always Have a Queen

Even if you do everything within your power to keep a caught swarm from leaving, they still might.

When providing the right environment and following the recommended removal and relocation protocols, a flighty queen or a dead one can still prompt a swift exit from the nice hive you have provided.

Some beekeepers who catch swarms on a regular basis may favor catching the queen and placing her in a “queen excluded” for several days or a week to force the other honeybees to remain in place until they get settled down. This is not a simple process, nor is it always successful.

If your caught swarm does not stay, review how and when you “captured” and moved the bees and the hive and surrounding environment that you offered them.

Taking notes and videos of the process can serve as great tools to review both when everything goes as planned as well as when the things turn out horribly wrong.

"Hi! I'm Kendra. I'm a wife, mother, and homesteader. I love everything that has to do with simple living. I'm a canning instructor, an avid gardener, and a constant learner of old-fashioned skills. Here is where I share it all. Welcome to the adventure!"
7 Telltale Signs of a Queenless Hive to Watch Out For
How Often Should You Inspect a Beehive?
Bee-Friendly Ways to Keep Pests Away from Plants
Is Feeding My Bees a Good Idea?
Why Do Beekeepers Charge Me for Bee Removal?