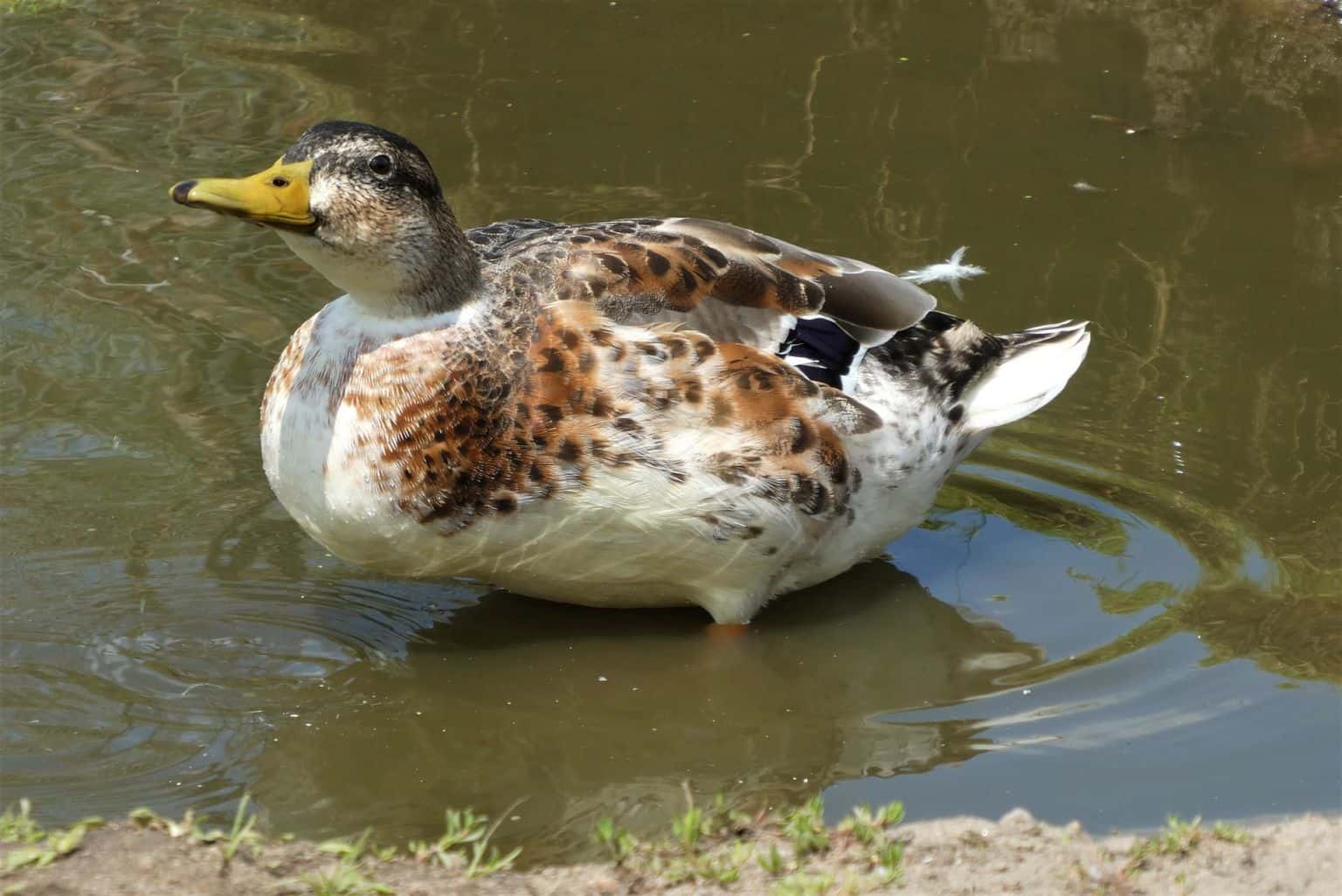 Silver Appleyard ducks are sometimes a little difficult to find, but are an eagerly embraced meat and egg breed by both amateur homesteaders and commercial keepers.

Members of this breed are classified as a dual-purpose or multi-purpose type of duck. Silver Appleyard ducks are also categorized as both Large Appleyards and Miniature Appleyards, based upon the specific breeding techniques that help to develop different strains of the breed.

Silver Appleyard ducks are often not only raised for their eggs and meat, but also for poultry bird exhibitions and for “decoration” on farm ponds. Some folks have become so enamored with their fairly quiet beauties, they keep them simply as pets.

The average lifespan of a Silver Appleyard duck is four to eight years, but some members of this breed have been known to live as long as 12 years.

This farmyard duck breed hails from Europe. Reginald Appleyard developed the Silver Appleyard ducks on his Priory Waterfowl Farm in the Bury St. Edmund area of England in the 1930s and 1940s.

Reginald Appleyard, a writer and an accomplished duck breeder, sought to create a large and beautiful duck breed that would produce quality meat and lots of big white eggs– he succeeded.

Appleyard unfortunately passed away before he could submit a breed standard to any poultry association. Yet, the Silver Appleyard breed continued to win ribbons at shows.

When accomplished artist E.G. Wippell painted an exquisite canvas of Silver Appleyards in 1947, which played a significant role in creating a breed standard.

The Miniature Silver Appleyard breed was also developed by Reginald Appleyard. He crossed a small Khaki Campbell with a White Call duck to originate this smaller version of the same new breed.

Appleyard’s original line of this new breed began to suffer a decline after 1945. During the 1970s, Gloucester, England breeder Tom Bartlett began an effort to essentially recreate the Silver Appleyard breed.

Gloucester has been deemed responsible for the great effort to save the breed, and help bolster its popularity at local hatcheries.

Bartlett purchased Silver Appleyard breeders with all the best qualities he could find on the open market. He then bred them selectively to achieve the best standard traits as illustrated in the depiction painted by E.G. Wippell.

These valiant efforts to save the Silver Appleyard breed resulted in them being accepted by the British Waterfowl Association in 1982. Bartlett also worked a little breeding magic with the Miniature Silver Appleyard version of the breed in the 1980s as well.

This small version of the poultry bird breed was shown for the first time at the British Waterfowl Association Champion Waterfowl Exhibition in 1987. These birds are approximately one third of the weight of the initial breed.

In 1997 a standard was ultimately established for the Miniature Silver Appleyard, and it was reclassified in the United Kingdom as the “Silver Bantam” breed.

It was during the 1960s that Silver Appleyard ducks were first imported to the United States. These ducks were readily available around the country in 1984.

It took until 1998 for the large version of the Silver Appleyard duck breed to be accepted by the American Poultry Association’s Standard of Perfection.

The miniature version of this breed that is available in America is believed to have descended from the small stature poultry birds first developed by Reginald Appleyard.

Silver Appleyard ducks are listed as “threatened by the Livestock Conservancy. In the United Kingdom the breed is protected by the Rare Breeds Survival Trust. Though the bird’s conservation status is listed as threatened, it is slowly but surely beginning to make a comeback.

Silver Appleyard ducks are a dual-purpose bird, bred for both their meat as well as their egg production capabilities. They are known for having good meat quality, with large breasts and good muscle development compared to other duck varieties.

Silver Appleyard ducks grow quickly and can be harvested in 10-12 weeks from hatching. Furthermore, the amount of fat contained in the bird is very low when compared to other domesticated birds. This makes them an ideal option for those looking for healthier options when serving up duck on the dinner plate.

If you want a hen of this breed to lay her own eggs, the best chance of that occurring is if she is offered a space away from the rest of the flock to help her feel safe to do so.

When choosing breeders, look for Silver Appleyards that meet breed standards, and do not weigh one pound over or under the recommended weight. Large, first time hen mommas sometimes accidentally smother their recently hatched ducklings.

Removing the ducklings to a brooder after they hatch may be wise when a large duck breed hen has successfully hatched her first clutch of eggs.

For the best chance of sustainable breeding results, keep one mature drake for every 8 to 10 females. Over-procreation in a duck flock can cause irreparable harm to the reproductive organs of both males and females – and potentially lethal internal injuries.

Silver Appleyard ducks do not need any dietary or living quarters husbandry techniques that are out of the norm with any other duck breed. A duck house and run or duck coop and run to protect them from both the elements and predators will serve their needs just fine.

These ducks don’t need anything special in terms of shelter compared to other breeds of ducks, geese, and other waterfowl you might be raising.

They can eat waterfowl or poultry bird feed – which is the more readily available type of feed sold at most agricultural supply stores.

When feeding ducklings, never use medicated chick feed, only purchase the non-medicated version to avoid exposing the young Appleyard ducks to components in this type of feed that can be deadly to all breeds of ducklings.

Silver Appleyard Ducks are an interesting waterfowl considered to be a medium-sized domestic duck, with an average lifespan of four to eight years, though some can live much longer (as long as 12 years in some cases!)

In short, yes – Silver Appleyard ducks are some of the best layers out there. Let’s take a closer look.

At What Age Do Silver Appleyard Ducks Start Laying Eggs?

Their peak egg-laying time is usually within the first few years of their life—which shouldn’t come as a surprise since they are known to live up to 10 years. On average, these ducks will start laying eggs around six months old.

How Many Eggs Do Silver Appleyard Ducks Lay?

This breed of duck is known to lay an impressive 220-265 eggs annually, with white shells. That’s quite a lot of eggs! And while they won’t lay an egg every day—they usually lay them every other day or so—you can count on having enough fresh eggs for breakfast throughout the year.

So what do you think? Is the miniature Silver Appleyard Duck right for you? This dual purpose breed has a great temperament and is a great choice for just about any homestead. Consider raising a few today!

"Hi! I'm Kendra. I'm a wife, mother, and homesteader. I love everything that has to do with simple living. I'm a canning instructor, an avid gardener, and a constant learner of old-fashioned skills. Here is where I share it all. Welcome to the adventure!"
So, Do Ducks Need a Pond?
Ancona Duck Breed Guide - Start Here
Winter Care for Baby Ducklings
12 Safe and Delicious Duck Treats
What You Can and Cannot Feed Ducks