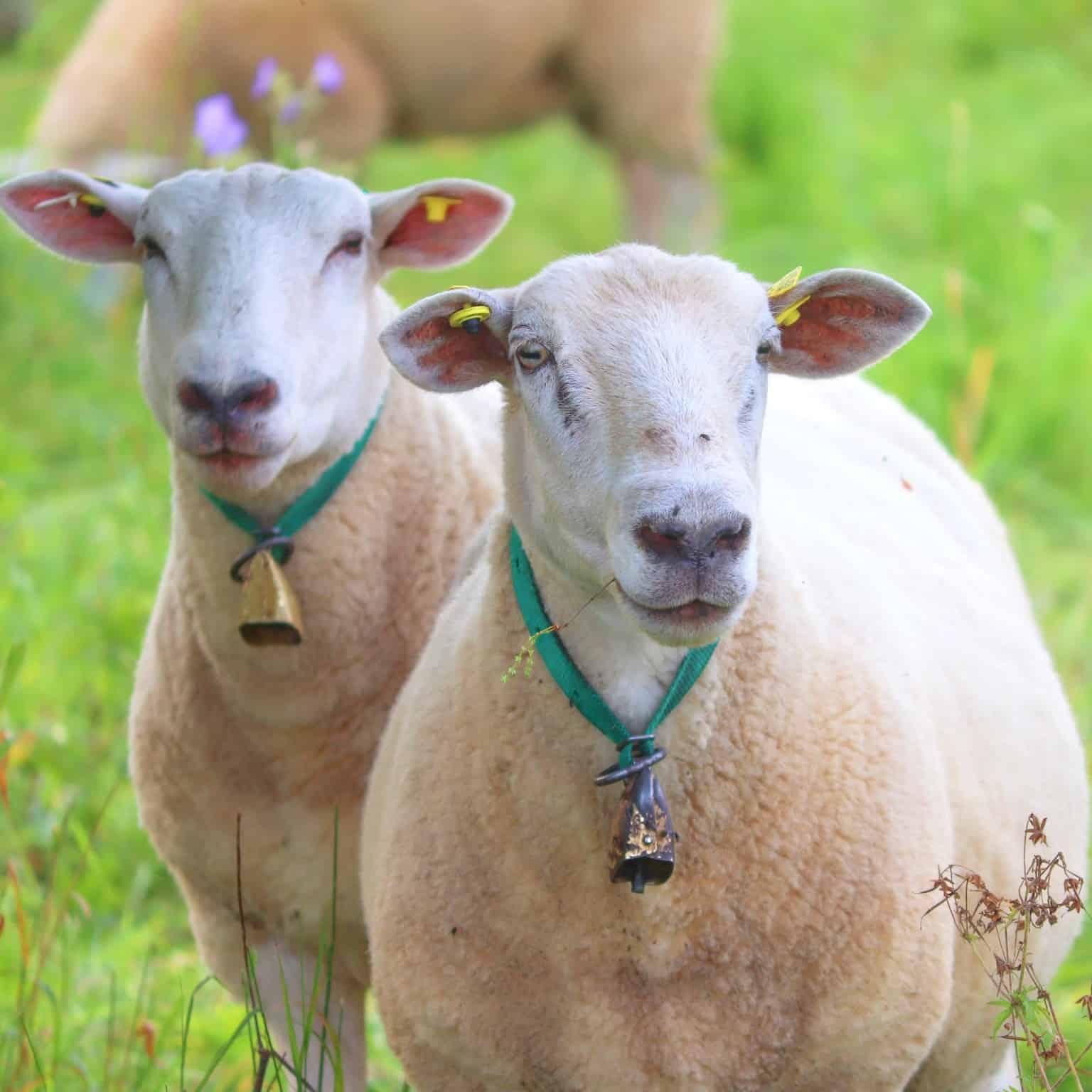 In many places, it is rare to come across larger livestock that doesn’t have a bell hanging from a collar around their neck. Sheep, in particular, are often outfitted with bells and the practice is so common that it is fairly synonymous with pastoral farm life in general.

But you have to imagine that wearing a bell like that would certainly grate on an animal’s nerves. Is it totally necessary? Do sheep really need to wear bells?

No, sheep don’t have to wear bells, but bells do offer shepherds real advantages when it comes to keeping track of their flock or locating a lost sheep.

Fitting livestock of all kinds, including sheep, with bells is a practice that goes back millennia in various cultures around the world so it’s no surprise to learn that it is continued right to this very day.

However, there are upsides and downsides to the practice, as you might imagine. Keep reading to learn more about the topic.

Yes, but no. Livestock bills do indeed play an important traditional role in many cultures’ various celebrations and holidays around the world.

Be it strictly for decoration on a festival day, or an integral part of the customs and ceremonies attendant with the most important holidays, you’d be surprised how often an animal wearing a bell would center in the celebration of the observance.

However, bills are not strictly decorative or fodder for postcards, paintings, and other depictions of peaceful farm life.

Before they were anything bells or tools when used in this way, helped shepherds, merchants, and anyone else that owned livestock keep track of them.

Considering how far and how fast your average four-legged animal is able to travel, especially when compared to a human, this makes perfect sense.

An animal that got out of sight could quickly become well and truly lost without a way to home in on it. That’s where the bell would come in.

Can Bells Hurt or Upset Sheep?

Bells on sheep don’t elicit smiles from everyone. In fact, there is a dedicated faction of animal welfare advocates, veterinarians, and other concerned parties around the globe that are trying to make livestock bills a thing of the past in all regards.

This is because, they say, the practice of fitting an animal with a livestock bill is overtly harmful to its physical and mental well-being. It isn’t hard to imagine how, and there certainly are studies to back up these claims.

Detractors claim that the bell’s loud pealing damages a sheep’s hearing, that the weight of the bell and associated collar cause neck injury, and that the bulk of the bell can make it difficult for sheep to graze.

Considering that some livestock bells, depending on the material and design, can be 110 decibels or louder, and weigh a couple of pounds without the collar, this is certainly plausible.

On the other hand, there are plenty of studies and a mountain of anecdotal experience, if you’ll believe it, that run counter to these conclusions.

Plenty of sheep seem entirely happy and well-adjusted despite the presence of a livestock bell around their necks, and it sure doesn’t seem like too many sheep are starving because of it.

Ultimately, the choice of whether or not you choose to outfit your sheep with bells is entirely yours assuming there aren’t any local regulations to the contrary.

There are good reasons for doing so, but thanks to modern technology you don’t necessarily have to. More on that later.

As mentioned above, there are several legitimate, practical benefits you can gain from hanging bells on your flock. We will talk about them below.

Easier to Keep Track of the Flock

The most obvious benefit that comes from sheep wearing bells is it is that much easier to keep track of your flock.

Of course, this isn’t much of a benefit if your sheep stay in a barn or other enclosure most of the time, but when they are allowed to free range and roam, particularly over a larger property, this is huge.

Obviously, the sound of bells will indicate where the flock is, more or less, but more than that the quality of the sound can tell you about their overall condition.

This is a great way to multitask while you are taking care of other chores or animals on your farm or homestead.

If you hear a frantic, rapid crashing and maybe some bleating to go with it this could tell you that the sheep are distressed, maybe from fighting or the threat of a predator.

And, naturally, if you don’t hear anything at all you know that your sheep are lying down, standing still or are out of earshot. Either way might be worth taking a peek for yourself!

Much Easier to Find a Lost or Stuck Sheep

For most of us, the single biggest benefit gained from hanging bells around the necks of your sheep is that it can help you track down any number of animals that have become lost or stuck.

Believe me, sheep get into a lot more trouble than you might expect when they are allowed to roam.

From getting caught at the bottom of a steep incline to becoming hopelessly tangled up in brambles or fencing thanks to their thick wool, if there is a way to cause you a headache sheep will find it. And, more commonly, sheep just get lost.

Yes, they are herd animals. Yes, they generally know how to get back to safety. But from stubbornness, distraction, or getting frightened and bolting one or more sheep might become lost in the course of their day.

When you round up the flock and your headcount turns up a missing sheep or two, you can rely on the bell around its neck to help you home in on them. Assuming they are still moving.

It might sound a little strange considering the stakes, but there is some evidence to suggest that bells can help repel predators. This is thought to be so for a couple of reasons.

First and most obviously, most predators that are large enough to hunt and try to bring down sheep are naturally quite cautious, however aggressive and direct they might seem when on the attack.

The clanging of bells may worry them enough prior to the attack that they decide to break off and look elsewhere.

Second, sheep tend to be pretty observant, and if one sheep notices a predator closing in it will give out a cry and start to run, usually sparking the rest of the flock to do likewise.

This will lead to a massive clanging and crashing of bells, and this sudden ruckus might throw off the predator’s mojo, spoiling the attack.

Now, this isn’t something you can necessarily depend on because predators will eventually adapt to the sound of bells, but there’s plenty of evidence to suggest that they do help somewhat.

Pretty much everyone imagines sheep as these woolly, fluffy, and entirely gentle herbivores. Well, everyone except people that actually own sheep.

They got the last part right, sheep are herbivores, but they can also be shockingly stubborn and downright hateful sometimes, particularly a ram during mating season or any mother that has lambs.

In any case, an adult sheep can easily hurt a person, particularly if they catch them unawares.

When you consider that an average sheep weigh anywhere from 130 to over 200 lb depending on the breed, and attack by charging and headbutting, a quick calculation will show you just what kind of damage can be done.

But no matter what you are doing and what the situation is, even if your back is turned the rapid and intensifying sound of a bell around the neck of a charging sheep might tip you off that you need to get out of the way.

If you don’t like the idea of sheep bells for whatever reason, you have viable alternatives, particularly when it comes to tracking down your flock or locating a lost sheep.

GPS locators can be mounted on a much lighter collar than a bell, and weigh much less.

Incredibly accurate, so long as they have signal and power they can tell you precisely where each and every sheep outfitted with one is at all times.

A modern solution that is increasingly popular, they are replacing bells in many sectors, though they are not audible and this reduces their capability in some circumstances to a degree.