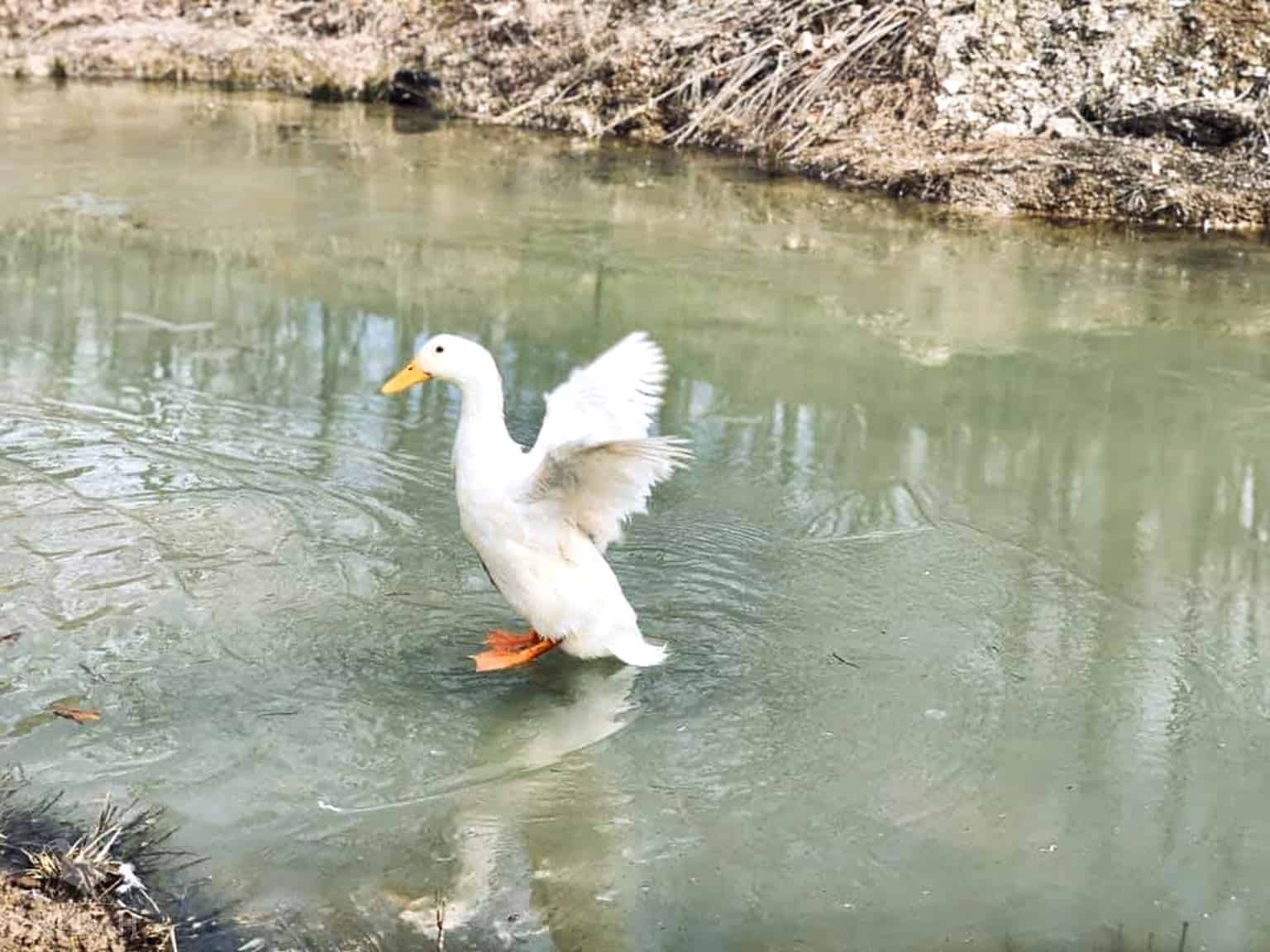 Ducks must have access to water at all times, both for drinking purposes and to swim in. The members of your duck flock will need access to swimming water even in the chilly weeks of January and February.

Keeping the water from freezing when the temperature dips below 32 degrees F (0 C) is far less of a chore if you have prepared for the annual snow and ice season at least a little bit in advance.

A large duck pond can actually be easier to keep from freezing than a plastic baby pool or prefabricated garden pond being used as a swimming water source for a duck flock.

The easiest and most affordable way to keep either a duck pond or a duck pool from freezing in the winter involves keeping or making a hole in any ice that forms on the water source.

Exactly how you go about keeping the duck pond from freezing will depend on how large of a space your flock has to swim, but all the basic principles are the same – and can even be adapted for use in the duck flock waterer.

Do Ducks Even Need Water During The Winter?

Ducks absolutely must have access to clean water at all times. Although ducks may swim very little during the winter months (this can vary by breed) they do, at the very least, need to be able to dunk both their heads and their bills in water.

Ducks are very clean creatures, and will insist upon bathing when they get muddy from soggy ground regardless of the season.

Exactly how you should go about keeping a duck water source from freezing will depend largely upon how large of a space you are trying to protect.

When trying to prevent a small duck pond or pool from freezing you may also have some success by square bales of hay or straw around its walls – leaving a space just large enough for one duck at a time to climb inside.

This practice helps to insulate the water and prevent freezing, but only helps so much and ice may still need to be broken up or use the salt water bottle method detailed below.

If you have a small plastic baby pool, plastic decorative garden pond, or livestock tank, the possibility of partially burying the pool or trough style duck “pond” may be an option. This will help use the warmer environment underground to help prevent freezing.

Again, you will probably have to combine this water freezing prevention tactic with others noted below.

Fill 1 gallon milk jugs with a 2 to 1 mixture of common table salt and tap water. This can help prevent a solid layer of ice from forming on the pond. Small plastic bottles can be used to keep a garden pond or baby pool from freezing solid.

The salt water filled jugs can be allowed to float around the pool, but when dealing with a large pond where frequent movement around the jug area is an issue, I recommend typing the jugs to ropes that are loosely strung across the pond so they are moved in place by the wind – or even the ducks themselves.

This trick works quite well until the temperature dips into the teens. During times like these, expect to increase the level of salt slightly, as well as to add more bottles with fresh hot water into the water source used by the ducks.

As noted above, you can use smaller plastic bottles filled with the salt water solution to help keep duck drinking water from freezing.

If you are using the type of waterer that has a lid (which I highly recommend) and fountain tips for drinking, there is another ice freezing prevention tip you can try either alone or in conjunction with the salt water bottles.

Buy a package of a dozen ping pong balls from your local dollar store, and simply toss them into the waterer and close the lid.

The ball will float around lightly all the time due to their lightweight nature but will move far more frequently every time a duck uses the fountain to snag a drink – which will also happen quite frequently.

Benefits Of Solar Power … Or Electricity

Purchasing and connecting a fountain pump in a large duck pond that is powered either by the sun or a long outdoor extension cord can also help keep the water moving enough to prevent a thick layer of ice from forming.

Purchase a fountain that is designed to have the head that is positioned more than a few inches above the water to avoid algae or duck droppings from clogging it, and preventing the water to flow properly – and potentially burning up the fountain.

A de-icer made specifically for livestock placed inside of a waterer, baby pool, or similarly sized duck water source to help prevent the water from freezing. In my personal experience, these handy devices are good down to only about 15 degrees F (-10 C).

Once the weather turns too cold the stock tank heaters can prevent water from remaining in a fully liquid state. They can still help keep a total freeze, allowing only slush to form, down to about 5 degrees F (-15 C) – depending upon the unit you purchase, and on wind chill.

A heated dog water bowl is usually deep enough for a duck to at least dip its head and bill into. While this is definitely not the same as going to a swim to bathe, it can provide the minimum access to water a duck needs if all else fails during a particularly frigid weather patch.

While this entertaining tip will only help keep water from freezing until the thermometer gets into the teens or maybe the twenties, it is helpful in keeping the water moving.

Place a head of cabbage, lettuce, or similar healthy snack that will float into the duck pool or small pond, and watch the poultry bird version of bobbing for apples ensue.

Floating food is also a superb boredom buster. A few words of caution though, if you are keeping ducks and chickens in the same run, the chickens will be striving for a treat, as well.

Chickens cannot only drown in a fairly shallow amount of water, they also can’t dry themselves quickly like ducks, and are more susceptible to frostbite than their webbed feet pals.

If you are merely trying to keep a waterer, baby pool, or small decorative garden pond from freezing during a particularly arctic weather wave when the tips above could use a little help, then simply boil a big pot of water.

When the Polar Vortex weather hit in our region, keeping the water from freezing was a constant battle for a few weeks. I boiled a big pot of water about three times per day, and headed out to the chicken and duck coop.

After making a handful of chips in the forming ice (think poking a potato with a knife before baking it) with a hatchet, I carefully poured the water into the waterers and the baby pool I kept in the coop run (for times the flock was not out free ranging).

This is a more time consuming and tedious way for keeping duck water from freezing in the winter – one that I would not want to do on a daily basis. But, the boiling water successfully bolstered the other freezing water efforts already underway on small scale duck water sources during that wretched pack of bad weather.

Ducks will poke through a thin layer of ice with their feet, but do not possess the capability to poke through thick or solid ice.

If the pond is also used by other barnyard livestock to water, the larger animals will help keep the shallow areas free from ice with their routine drinking – breaking the ice up with their hooves as necessary as it starts to harden.

"Hi! I'm Kendra. I'm a wife, mother, and homesteader. I love everything that has to do with simple living. I'm a canning instructor, an avid gardener, and a constant learner of old-fashioned skills. Here is where I share it all. Welcome to the adventure!"
How to Incubate and Hatch Duck Eggs
The Ultimate Winter Care Guide for Ducks
Welsh Harlequin Duck Breed Guide - Start Here
Indian Runner Duck Breed Guide - Start Here
Duck Language: How to Interpret Duck Behavior