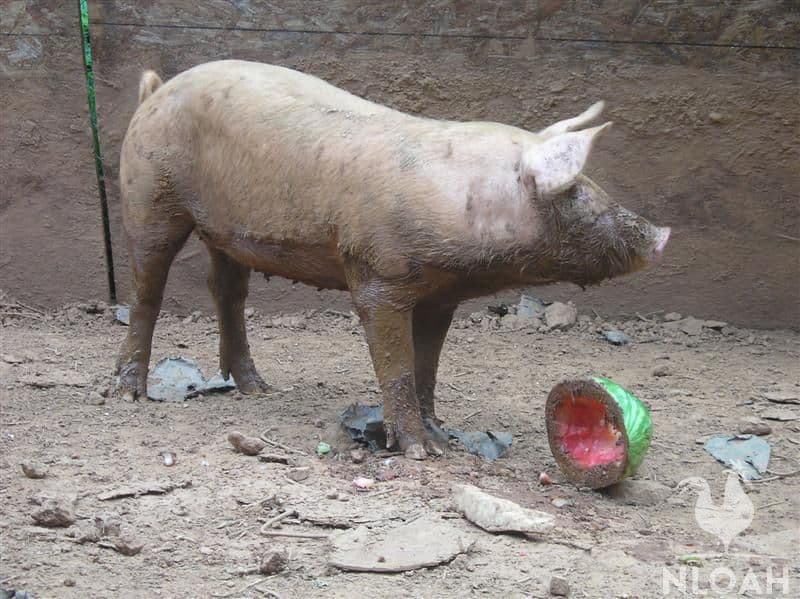 Pigs, or hogs as we call them in my neck of the woods, are omnivores. The traditional farming and homesteading type of livestock are incredibly biologically similar to people and can eat nearly anything recommended for a healthy human diet.

Hogs are largely “opportunistic” eaters. The bulk of a pig’s diet is based on what is available in their natural environment each season.

Pigs forage for their food and most often seek out roots, acorns, various tubers, fruits, mushrooms, grass, and bulbs.

Pigs are perhaps the most economical type of livestock to feed because they are savvy independent foragers and also can remain healthy while eating a wide variety of common kitchen and garden scraps.

As farm science pioneer and Pulitzer Prize winner Louis Bromfield once said, “If you raise the pigs and raise the corn, you will make money.”

What the farm expert was eluding to was both the economical way you can raise pigs for profit if you keep a breeding pair and plant corn to feed them.

But, if you have to both buy the pigs and the massive amount of corn to feed them as a dietary staple, you will probably wind up with empty pockets.

There are three tried and true ways to feed pigs:

If you can grow enough corn and small grain hay – alfalfa, barley, or wheat to feed the hogs, the hogs being raised on your land will cost little to nothing to feed, fatten up, and keep healthy.

You can also grow corn, and supplement that with purchased hay, if you do not have the space or equipment to grow hay.

Even if you have ample acres for pigs to forage for food, allowing the animals to wander around horses or goats, is not a typical or traditional way to feed hogs.

The more the animals walk around looking for food, the more calories they will use – causing them to drop weight and produce less meat at butchering time.

Purchasing commercially manufactured hog grain feed can also provide all or nearly all the nutrients the pigs need, but exclusively going that route will be costly.

In fact, if you have to buy the bulk of the food the hogs will need, it will likely be cheaper to simply purchase pork at the local grocery store.

Placing a mixture of a quality grain feed as well as corn on the cob, barley, wheat, and or alfalfa hay into the automatic hog feeder will allow the pigs to choose what they want and their body is craving from a small sampling of healthy options.

A pig will typically consume between six to eight pounds of feed per day – regardless of the type being fed.

From the time the weaner pig is purchased or born until it hits a mature finishing weight, each hog will usually consume between 700 to 1,000 pounds of food.

There are many healthy snacks that come from scraps that hogs can eat safely. But, never place such food items in with the other feed, or rotting and the development of bacteria will occur.

Instead, place safe pig treats and supplements into a separate tub. A plastic barrel cut in half that is mounted to a few pieces of firewood or screwed onto wood fencing, works just fine.

Any food scraps that are over three days old should be placed in the compost pile and not the hog feeder to prevent the animals from ingesting the bacteria, mold, and rot that is developing on the old kitchen scraps.

While hogs can eat dairy products, they should not be fed in excess. Some pig keepers feel the ingestion of dairy products as a regular weekly snack can help make their meat both taste better and be more tender.

Acorns are safe for pigs to eat but have been known to cause miscarriages in pregnant sows.

Contrary to popular belief, pigs do not (and should not) eat everything. Some pigs can be actually down right picky about what they eat.

While most foods that we folks eat can be shared with the hogs we keep, some food types and plants that regularly grow in the United States can be unhealthy or even deadly toxic to pigs.

A pig’s diet should be rich in protein, but low in both sugar and salt. Keep this in mind when supplementing the grain and corn regularly fed to the hogs, with kitchen and garden scraps.

Do not feed your hogs domestic pet feed and treats; the nutritional makeup of such feed items is not necessarily recommended for hog consumption.

Hog pens are not generally spacious areas, even the ones that are large enough to offer the most humane living environment possible.

But, if you allow the pigs to live in a space large enough to forage, permit them to free range for a portion of the day – or go on supervised walks, they will instinctively search for and find insects, roots, and other natural dietary items, – both above and below ground, to help round out a healthy diet.

Fattening up a hog on a healthy diet is a good thing, but allowing a pig to get obese from eating sweets and unhealthy treats – is not. An obese pig is not a healthy pig, nor is one that will produce a quality meats or piglets.