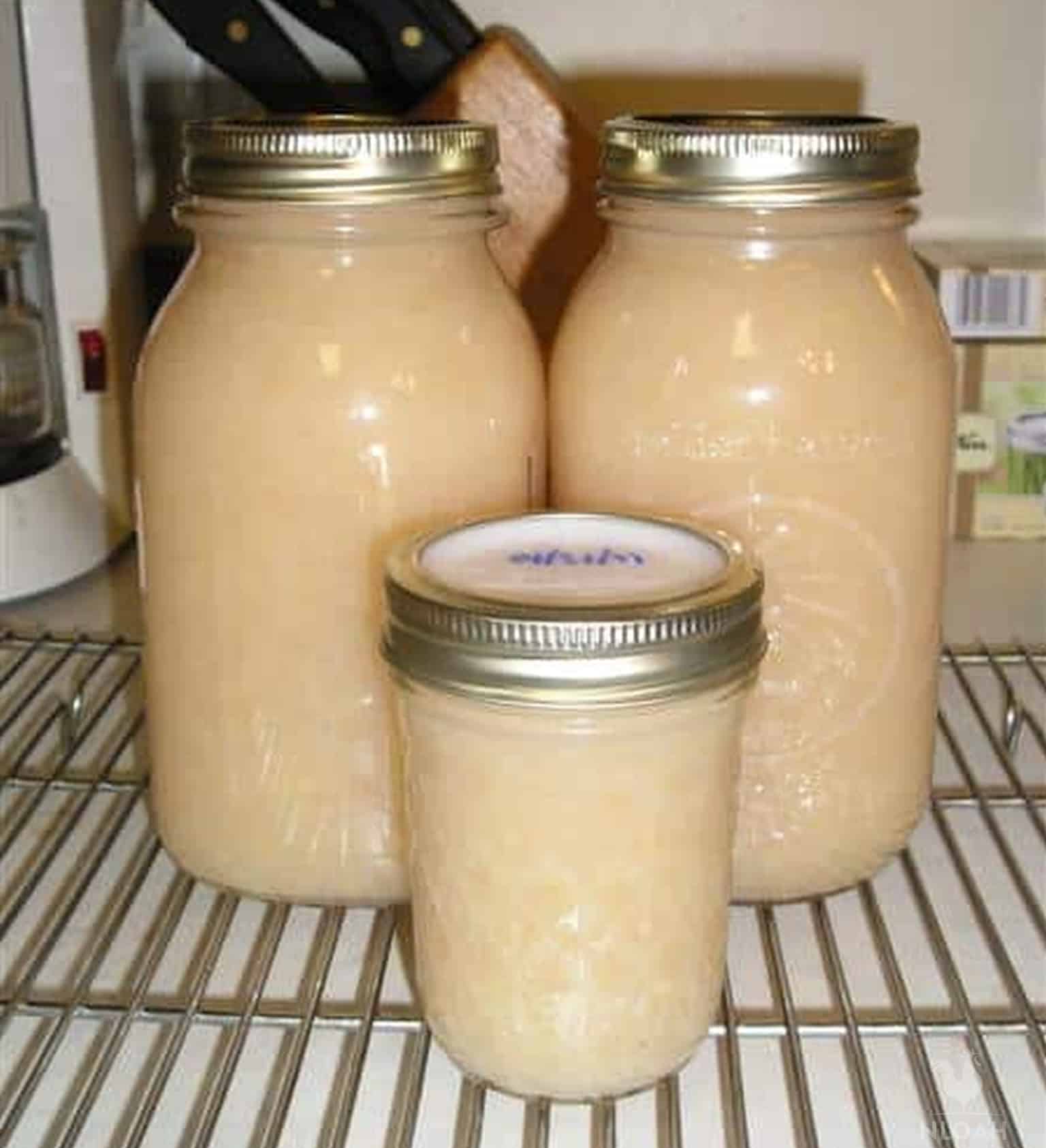 Making Pear Sauce is a great alternative to applesauce when you have an abundance of pears, and tastes just as sweet even with no sugar added! My guys actually prefer pear sauce to apple sauce, so I try to make a lot of it.

The procedure is similar to canning sliced pears, with just a couple of key differences. Here’s my favorite pear sauce canning recipe. You may sweeten to taste, though I never need to add any sugar.

For this project you’ll need:

And here we go!

Step 2. Then peel the pears:

You can save the peels and cores (those without insect damage or bad spots) to use to make pear jelly!

Step 3. Remove any bad spots from the fruit:

Step 4. Slice, cut out the hard pit section, then chop into small-ish pieces.

Step 5. In the meantime, make sure you have some mason jars cleaned, sanitized and HOT. The easiest way to do this is to run them through the dishwasher:

You can use pints or quarts, wide mouth or regular, whatever suits you best. I can pear sauce in quart jars. My four kids will kill a whole quart of sauce in a single snack break, so it’s best for me to save lids and go with the bigger sized jar.

You can also wash the jars by hand, and then submerge the jars into a large pot of boiling water to keep hot and sanitized.

Sometimes I will also put clean jars into a hot oven (set at around 250 F / 121 C, then turn off) and let them sit in there to keep hot until I’m ready to use them.

Step 6. Once you have all of your pears peeled and cut up, put them into a large pot:

Fill it with just enough water to keep the pears from scorching (an inch or so in the bottom of the pot), then cover and cook over medium or med/low heat, stirring occasionally, until the pears are thoroughly soft.

Step 7. The next step is to puree the pears. I use a food strainer:

It’s a little messy, but it does a good job. I have to use it in my bathroom, though, ’cause it’s the only counter the strainer will clamp onto.

Step 8. Return the pureed pears to the pot. Taste to see if you need to add any sugar, though like I said I never have to sweeten it at all. Bring the pear sauce to a gentle boil:

Step 9. While that’s heating, have your lids simmering in a small pot of water (not boiling!). You can see I have some jars in boiling water here as well, waiting to be used:

Once the pear sauce reaches a light boil, continue boiling as you fill the hot jars one at a time. Stir the sauce every now and then to prevent burning.

Step 11. Use a wet rag to wipe the rim of the jar clean. I usually dip a clean paper towel in the simmering lid water and run it over the rim after wiping, just to make sure there isn’t anything sticky still there:

Step 12. Now you’re ready to put the lid on. Using a lid lifter, retrieve a hot lid from the simmering water:

… and place the lid on the jar:

Now screw on a clean ring to tighten down the lid:

Step 13. Once all of your jars are filled and sealed, place them in a water bath canner. Fill the canner with enough water to cover the jars with 1-2″ of water. Put the lid on the canner, and bring to a steady rolling boil:

Continue to process pints or quarts at a steady boil for 20 minutes.

Once the time is up, use a jar lifter to remove the jars from the water bath canner.

Allow the jars to cool overnight, preferably on a rack.

After about 24 hours, remove the rings from the jars and try to pry the lids off with your fingers. If they do not come off, they’ve sealed and are safe to store.

If a lid does come off you can either put the jar in the fridge to be eaten soon, or if you really want to store it up, you can pour the sauce back into a pot and can it over again in a new jar, with a new lid.

Don’t forget to write the date and contents on the lid with a sharpie. Pear Sauce will stay fresh for up to a year before the taste, texture and nutrients begin to diminish. That is not to say they won’t be safe to eat, they just won’t be as good as they were within that first year.

Before putting your jars up, remove the rings from the lids. Over time, these can corrode and become hard to remove, so it’s best to store jars without them.

If at any point a lid unseals on its own (not likely to happen, but possible), the contents have been compromised and are no longer safe to eat.

Have you ever tried pear sauce? Have a tip to share?

65 thoughts on “How To Can Pear Sauce”