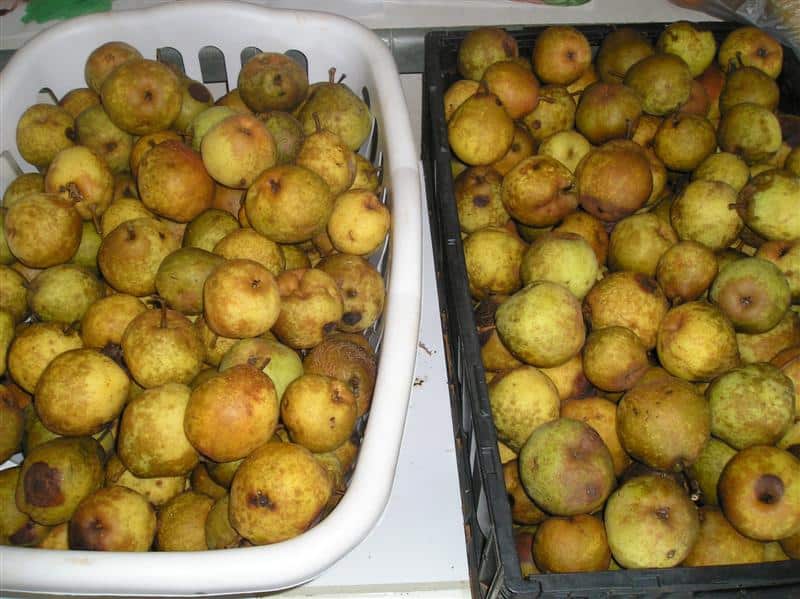 It’s pear season! And boy have I had more than I can handle. Anyone want to volunteer to come over and help me cut and peel pears? Anyone?

Several days ago, a friend of mine gave me a call and told me that her neighbor has three or four pear trees that are loaded this year, and the pears are just falling and rotting on the ground.

Her neighbor told her she is more than welcome to come and get as many as she wants, so she thought I might be interested in helping myself as well.

I happily paid her a visit, and filled several laundry baskets and plastic bags full of all the pears I could fit in my car. Some were spoiled ones I’d cleaned up out of their yard. I figured it would help them mow and my chickens would be more than happy to indulge in the rotten fruit.

Many of the pears were still green, but I knew I’d better pick them before the wasps got a hold of them.

There were already many of them enjoying the ripe fruits from the tree, so we did our best to avoid a sting while we picked. After a few days of sitting, the green pears would be just right for canning.

One thing you must accept when picking backyard fruit is that there will most certainly be blemishes and bugs to deal with.

But you know what? That’s okay! Imperfections only mean that it’s actually REAL food, and if a worm is in it that’s a good sign that it’s safe for you to eat as well.

Anyways, my kids love sliced pears so I try to can as much as possible this time of year. I’m warning you, canning pears takes a lot of prep work, but you’ll be glad you did it.

I use the raw pack method. It’s easiest, ’cause you don’t have to cook the pears first.

For this project you’ll need:

First, wash your pears. Yes, even if they haven’t been sprayed.

Get your supplies ready. I like to use either a potato peeler or a knife to cut the pears, and a melon scooper to remove deep bruises and the hard centers.

Pears will start to turn brown after sitting out for a while, so it’s best to treat them as you go. I use a big bowl of cold water (about 2 quarts full) and add 1/2 cup of lemon juice. You can also use a product called Fruit Fresh, if you prefer. I like whatever’s cheapest.

Peel the pears. Sometimes I cut the pear and then peel it with a knife. Sometimes I peel it and then cut it. Truly, it doesn’t matter either way.

You can save the peels and cores (those without insect damage or bad spots) to use to make pear jelly!

Just be careful not to peel your fingertip!

Remove any bad spots from the fruit:

Oh look, a worm! You thought I was joking, didn’t you?

Like I said, a worm is a good sign, people. It means the fruit is safe to eat. It’s the pears that insects won’t touch that you need to be worried about!

Just be sure to thoroughly check the fruit for holes as you are cutting. If you find a hole or a bad spot, cut through it to make sure there aren’t any critters still hiding in there.

Now, drop the peeled, cut pears into the lemon water to prevent darkening.

Continue slicing pears until you have enough to fill a few jars.

I noted that it took 5-6 small to medium pears per quart jar. Keep in mind that since these were organic pears, they had damage that had to be cut away, so I may have only actually used a fraction of a whole pear.

If you are using store-bought pears, I would guess it would take about three pears to fill a quart jar, give or take.

In the meantime, make sure you have some wide mouth quart jars cleaned, sanitized and HOT. The easiest way to do this is to run them through the dishwasher.

You can also wash them well by hand, and then submerge the jars into a large pot of boiling water to keep hot and sanitized. Sometimes I will also put clean jars into a hot oven (set at around 250* then turn off) and let them sit in there to keep hot until I’m ready to use.

Allow the pears to drain while you get your other supplies ready.

Now let’s get our stove-top stuff in order. You’ll need to make a syrup for the pears, and you’ll need to simmer the lids to sanitize.

For the lids, bring a small pot of water to a simmer, being sure not to bring to a boil. Add the lids and reduce heat to continue a steady simmer. Allow the lids to simmer for five minutes before using, and keep hot until ready to use.

In a large pot, make a syrup to fill the jars with. You can use plain water to can your pears, but they will not have much flavor. I can mine in an extra light syrup.

Bring your syrup (or water) to a boil, reducing heat to continue a steady simmer.

Now you’re ready to pack your jars. Get them out one at a time so they stay hot. If your jars aren’t hot when you pack them, they may crack from the heat of the syrup.

You can use a funnel to pack the pears into the jars, or you can do it by hand. Gently tap the jar on the counter to settle the pears so that you can cram as much as possible into each jar. Fill to within 1/2 in from the rim of the jar.

With a funnel in place, ladle the hot syrup over the pears, filling to within 1/2″ from rim (1/2″ headspace).

Using a wooden or plastic handle, move the pears around to release any air bubbles. Tapping the jar on the counter also helps.

Use a wet rag to wipe the rim of the jar clean. I usually dip my finger in the simmering lid water and run it over the rim after wiping, just to make sure there isn’t anything sticky still there.

Now you’re ready to put the lid on. Using a lid lifter, retrieve a hot lid from the simmering water…

and place the lid on the jar.

Now screw on a clean ring to tighten down the lid.

Once all of your jars are packed and sealed, place them in a water bath canner. Fill the canner with enough water to cover the jars with 1-2″ of water. Put the lid on the canner, and bring to a steady rolling boil.

Continue to process the jars at a steady boil for 30 minutes. (If you’re using pints process for 25 min.)

Using a jar lifter, remove the jars from the water bath canner, and allow to cool on a rack overnight. After about 24 hours, remove the rings from the jars and try to pry the lids off with your fingers. If they do not come off, they’ve sealed and are safe to store.

If a lid does come off you can either put the jar in the fridge to be eaten soon, or if you really want to store it up, you can dump the pears out and can them over again in a new jar, with a new lid.

The pears might look pinkish after being canned. That’s normal.

Don’t forget to write the date and contents on the lid with a sharpie. Canned pears will stay fresh for up to a year before their taste, texture and nutrients begin to diminish. That is not to say they won’t be safe to eat, they just won’t be as good as they were within that first year.

Before putting your jars up, remove the rings from the lids. Over time, these can corrode and become hard to remove, so it’s best to store jars without them.

If at any point a lid unseals on its own (not likely to happen, but possible), the contents have been compromised and are no longer safe to eat.

If you’re new to canning pears, and have any questions, or if you have a tip to add, please don’t hesitate to say so! Happy canning!

72 thoughts on “How To Can Pears (Halved or Sliced)”