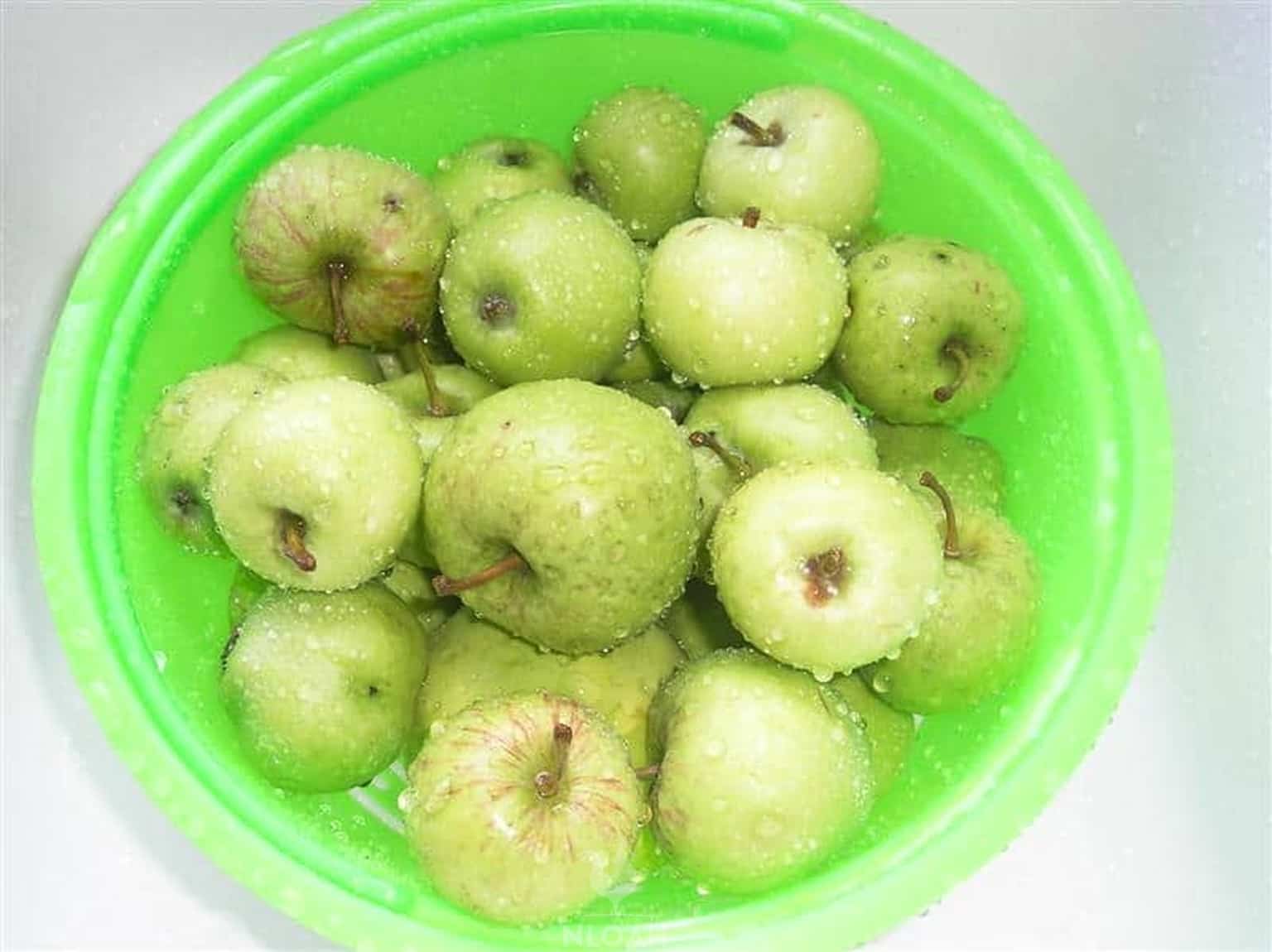 Did you know that you can make your own pectin from unripened apples? Isn’t that the coolest thing ever?! For those who don’t know, pectin is what is needed to make jellies and jams; it’s what makes it “gel”.

Normally, you would just go buy a pack of pectin at the grocery store… but think of how great it would be to make your own! Not only would it be all natural, but what a money saver!

As soon as I found out how to do this I had to give it a shot. See, a few weeks ago I was at Jerry’s parent’s house, and his mom told me that her apple tree had some apples on it that were ready to be picked.

Well, dumb me went and picked from the wrong apple tree! I felt SO bad when we realized what I’d done. I totally wiped out an apple tree that wasn’t even ready yet! I had to find a way to use all of those bitter, unripened apples so that at least they wouldn’t be a total loss.

I was really excited to give this a try. After finding the right recipe, I set to work. Here’s how it’s done…

What is Pectin – and What is it Used For?

Pectin is a natural substance found in fruits and vegetables. It helps to thicken jams and jellies, and can also be used as a stabilizer or emulsifier in other foods. Pectin is derived from the cell walls of plants, and is most concentrated in the peel and seeds.

When cooked with sugar and acid, pectin forms a gel-like substance that helps to thicken and preserve jam. Pectin can also be used as a gluten-free alternative to flour, or as a fat replacer in baked goods. In addition, pectin has been shown to have health benefits, such as lowering cholesterol levels and promoting gut health.

As a result, pectin is an incredibly versatile ingredient that can be used in a variety of ways.

Is Pectin Natural or Synthetic?

Pectin is a complex carbohydrate that is found naturally in plant cell walls. It is commonly used as a thickening agent in food, cosmetics, and pharmaceuticals.

Pectin is typically extracted from citrus fruits, but it can also be derived from other plant sources such as apples and carrots. In its natural state, pectin is a translucent powder that dissolves easily in hot water. Pectin can also be chemically modified to create a variety of different textures and consistencies.

For example, highly refined pectin is often used as an ingredient in jellybeans and other hard candies. In contrast, lower grades of pectin are used as stabilizers and emulsifiers in products such as salad dressings and ice cream.

While pectin is often considered to be a natural product, the vast majority of commercial pectin is actually synthetic. This is because natural pectin is difficult to extract on a large scale, and it can be expensive to produce.

How Can I Get Pectin Naturally?

There are many ways to get pectin naturally. Fruits that are high in pectin include apples, apricots, berries, oranges, and plums.

Vegetables that are rich in pectin include carrots, celery, green beans, and potatoes. In addition, there are a variety of pectin-containing supplements available for purchase online or in health food stores.

What Food is Highest in Pectin?

While all fruits and vegetables contain some pectin, there are a few that stand out as being particularly high in this nutrient. Apples, for example, contain around 1.5 grams of pectin per 100 grams.

Citrus fruits such as lemons and oranges are also good sources of pectin, with around 0.5 grams per 100 grams. Other high-pectin foods include plums, strawberries, pears, quince, and carrots. Another high pectin fruit to consider making pectin from is cherries.

Including these foods in your diet is a great way to increase your intake of this healthy nutrient.

Where Does Apple Pectin Come From?

Apple pectin is a soluble fiber that is often used as a thickening agent in food. While it is most commonly associated with jams and jellies, it can also be found in some desserts, sauces, and even some meat products.

Pectin is derived from the cell walls of plants, and apples are one of the richest sources of this dietary fiber. In fact, apple pectin makes up about 1-2% of the total weight of the fruit.

The majority of the pectin in an apple is concentrated in the skin and seeds, which is why applesauce and apple juice usually contain less pectin than whole apples.

Apple pectin can be extracted commercially or homemade, and it is available in powder, liquid, or gel form.

What Kind of Apples Should You Use to Make Homemade Apple Pectin?

When it comes to making homemade apple pectin, the type of apple you use is important. You want to use an unripe apple, as these apples have more pectin than ripe apples.

You also don’t need to use a whole apple – the peels are actually where most of the pectin is found. You can use the “leftovers” of apple peels and cores that you have from making things like marmalade, preserves, or pie filling if you want. Apple scraps are perfect for making pectin!

So if you’re looking for an efficient way to make apple pectin, using crab apples or bramley apples is a great option. You could really use whatever kind of tart apples you have on hand, though, including ones like Granny Smith.

Not only do these types of apples have a high pectin content, but they’re also relatively small, so you won’t need to use as many of them.

Ready to make your own homemade pectin? Here’s how to do it!

Gather several unripened apples; the more the merrier, the amount doesn’t really matter- 2 lbs is a good starting point. They should be hard, green, and a bit sour. Obviously, the first thing you need to do is wash the apples.

2. Cut The Apples Up and Add Water

Next, cut the apples into pieces; quartered is fine. Keep the core and the skin as well. Add enough water to almost cover the apples; cover and heat on medium-low.

It took over a day for my apples to cook down enough, though I did turn it off overnight and when I had to leave the house for a while. Keep stirring occasionally, breaking up the bigger pieces.

Next, you need to strain it. This will separate the pectin from the apple pulp. I put a strainer over a pot, lined the strainer with several layers of cheesecloth, and covered it to keep the bugs out. You might need to let it sit overnight, as it drains slowly.

Don’t press on the mixture, unless you don’t mind cloudy pectin. You could also use a colander to strain your batch of apples.

What you are supposed to get is a clear, thick, slimy liquid; that’s the pectin:

Anyways, you can test your pectin to see if it will gel properly. To do so, get a spoonful of your pectin, and let it cool. Pour a little rubbing alcohol into a glass, then drop in your cooled pectin.

The pectin ought to form a blob of gel, which you should be able to lift with a fork. If it is too runny to be lifted, then you’ll need to boil it down some more to increase the concentration, which is what I had to do.

But, please, don’t step away from the stove while your juice is cooking. Not even if it’s only for two minutes…

Yeah. That would be burned apple pectin:

You have to watch it closely, and stir constantly!

If you are lucky enough to get the clear, gel stuff you were supposed to end up with, you would use 4-6 Tbsp of pectin for every 1 cup of fruit juice when making jams or jellies.

Once your pectin and fruit juices are mixed, add an equal amount of sugar (i.e.: 2 cups of pectin/fruit mixture to 2 cups of sugar). (Though there seem to be some discrepancies in the amount of sugar to pectin you should use.)

Then continue on making your jelly as usual. Heat the mixture over med-high heat, stirring constantly; bring to a boil and let it boil for about a minute. Then allow it to simmer.

Test the jelly by dipping a teaspoon into the hot mixture. Hold it sideways; if the jelly drips off, let it boil a little longer, if the jelly slides off in one glob, it’s thick enough. Bring the mixture to a hard boil over high heat, then remove from the burner.

How to Store It

The best way to store pectin is to process it in a hot water bath (although you can also freeze it or store it in the fridge).

To can your apple pectin, pour the finished pectin from the large pot into canning jars (pints or quarts are fine). Leave about half an inch of headspace for each of the pint jars. Apply your lids, then process in a boiling water bath for 10 minutes.

Easy as that! Once canned, your pectin should last for several years.

How Long Does Apple Pectin Last?

Pectin is a natural product and therefore does not have an expiration date. However, it can start to degrade over time, especially if it is stored in an airtight container.

For best quality, it is recommended to use apple pectin within one year of making it (and canning it) . That said, if you store it properly, it will still be effective for several years after that.

When storing apple pectin, be sure to keep it in a cool, dry place. Once opened, it should be used within 6 months. The same rules apply for freezing apple pectin.

If not canned, you should use apple pectin within a few weeks of making it, but be sure to store it in the fridge.

How to Use Apple Pectin

Apple pectin is often used in jams and jellies to give them a thicker consistency, and it can also be used to thicken sauces or soups. Apple pectin is available in powder or liquid form, and it can be found in most health food stores.

To use apple pectin, simply mix it with the desired amount of water and stir until it is completely dissolved. Then, add the mixture to your recipe as you would any other ingredient.

Keep in mind that apple pectin will thicken as it cools, so you may need to adjust the amount you use depending on how thick you want your final product to be.

So there you have it! Everything you need to know in order to make pectin out of apples. Get started today!

6 thoughts on “How To Make Apple Pectin”