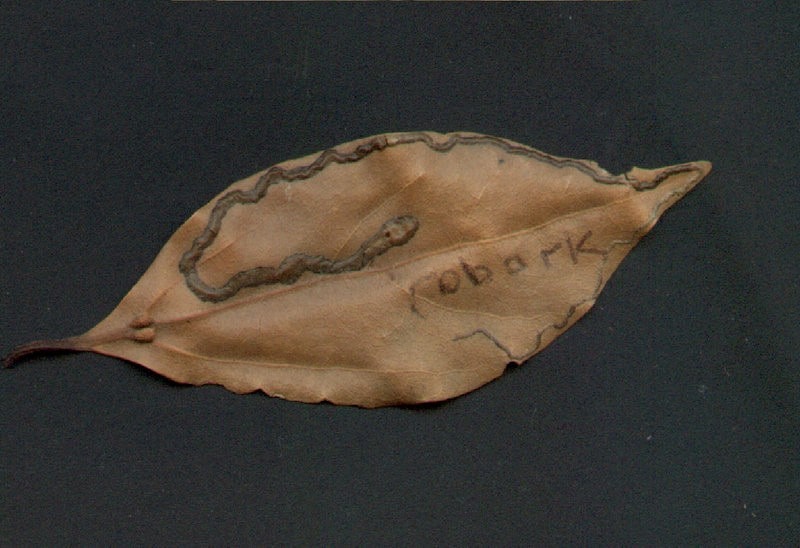 Leaf miners are a destructive variety of insects that can destroy a garden or orchard in a single season, or harm plants enough to drastically reduce their yield. These tiny black fly larvae leave pale lines or blotches on the plants they carnage.

These bad bugs are the larvae of the Hymenoptera and Lepidoptera Diptera genus. They burrow (or mine) themselves inside of leaves, and feed upon their home as they grow from larvae to maturity.

Leaf miners leave roaming white lines that can appear like they have been painted onto the leaf in a scattering pattern. The line patterns are created as the leaf miners tunnel their way throughout plant leaves.

Leaf miner is a broad term used to describe the larvae of Lepidoptera, Diptera and Hymenoptera that live inside of plant leaves while feeding and maturing.

Leaf miner lines are usually white, but can also have a yellow cast to them. It is also not unusual to see small traces of frass (fecal matter) running through the mine tunnel lines on leaves.

These destructive insects are found in gardens, greenhouses, and even inside homes, across the United States.

Mature leaf miners measure just one-tenth of an inch long. The maggots are approximately one-third of an inch long. Leaf miner larvae range in color from clear to yellow, or sometimes even green.

Being able to identify the types of mines created on the leaves can help you determine which variety has infested your garden crops.

The types of mines leaf miners tunnel into leaves are classified as either “serpentine” or “blotch” mines.

The blotch mine tunnels look more like white or yellow spots on the leaves, rather than long tunnels. The blotches are formed when the leaf miner larvae turns around when it feeds instead of eating as it tunnels.

Although not as common, some leaves can show signs of both serpentine and blotch leaf miner mine tunnels.

In cases like this, the serpentine mining tunnels are typically formed first and then the leaf miner larvae travel to yet uneaten portions of the leaf in search of more nourishment.

These insects are both damaging and beautiful. Their name stems from the bright and colorful hue to their exoskeleton.

The leaf miner larvae of this variety, as well as the weevil and jewel beetle variety produce legless larvae.

Female leaf miners of these types cover their egg clutches with a shiny coat of black after laying them. Leaf beetles create blotch mine tunnels, as do weevils and jewel beetles.

These leafminers are also commonly called snout beetles due to the odd shape of their head. Mature insects of this variety are among the most damaging to crops.

The eggs of this type of leaf miner are translucent. The mature females use their tubular reproductive organ to slice slits into plant twigs to lay their eggs but can also place her clutches inside of leaves.

Sawflies create serpentine mining tunnels inside of the leaves. There are approximately 6,000 different types of sawflies.

Larvae from this type of leaf miner have brown or black bodies with a thread style antenna. Larvae have a distinct head shape and mouth parts that are capable of heavy chewing.

Mature leaf miners of this type boast a silk generating organ that is deemed a “spinneret.” Their front wings are a shiny black with white stripes. This type of leaf miner prefers tree leaves.

Their mining nearly always stunts tree growth and causes leaves to dry up die early on in the season, leaving any tree they infect with a fall style appearance.

When new leaves try to grow they too are infected and soon dry up and die as well. Horse chestnut leaf miners are capable of creating up to six generations during a single growing season instead of the typical three, and prefer warm climates.

This variety of leaf miners create both serpentine and blotch tunnels.

This variety of leaf miner was first discovered in 1993 in Florida. Just two years later the leafminers also began to appear in Texas and then ventured to neighboring countries south of the border.

Citrus leaf miners prefer to attack lime, orange, lemon, and grapefruit trees. They almost exclusively attack young growth on trees and do not attempt to tunnel into the fruit it produces.

They are among the largest of the leaf miner varieties and leave a distinctive trail of their feces inside the serpentine tunnels they make.

Where to Look For Leaf Miners

The leaf miners are the larvae (or maggot) stage of this insect variety that are found on either side of the surface of plant, bush, and tree leaves.

It is typical to find a minimum of six leaf miners tunneling into a single leaf. These little maggots tend to favor the following plants:

Leaf miner larvae spends the winter buried in the dirt beneath their host plants. In the spring, when the temperature starts to warm up, the larvae start to process from their pupil stage into a juvenile or young adult state by the final days of April.

Once mature, female leaf miners mater and the use their needle-style reproductive organ to lay roughly 250 eggs beneath the surface of the leaves.

The leaf miner egg deposits resemble tiny raised blotches or spots on the leaf, at this stage in their life cycle. Leaf miner eggs hatch in only 10 days.

Once born, the larvae immediately begin mining through the middle level of leaf tissue – eating their way deeper inside the leaf.

Once the leaf miner maggots transition into the pupal stage they exit the leave and travel down into the dirt. The young leaf miners dig their way up to two inches into the soil to continue their life cycle processing.

The leaf miners leave their underground cave about two weeks later to mate and start the cycle all over again. There are multiple generations of leaf miners hatched during a single growing year.

These destructive insects tend to mine onto the lower leaves of a plant because their tissues are composed of tannins and cellulose.

Although the initial damage caused by the leaf miners is merely cosmetic, an infestation that is not quickly controlled will lead to severe damage of the plants.

The mine tunnels created by the burrowing insects pave the way for bacteria and disease to infiltrate the plant and grow with reckless abandon.

Droopy leaves are another sign that leaf miners have taken over your garden plants.

When the holes in the leaves become filled with bacteria, plant diseases, and fungal spores, that harmful matter is spread by the leaf miners and other insects that travel through and on the plant.

How To Control a Leaf Miner Infestation

Being able to identify and stop a leafminer infestation early is vital to stopping it before the entire orchard or garden becomes afflicted.

Review all of your plants during the early weeks of the growing season. This is when mature leaf miners are the most active, and seeking a spot to lay their eggs.

Careful inspection should reveal clutches of the small eggs on the leaves. Anytime you spot a leaf miner tunnel on a plant, crush the lines between your fingers to kill the larvae but do little to no further damage to the leaf.

Place sticky traps around the perimeter of the garden – especially around areas where the foliage tends to become damp.

Cultivating trap crops like velvetleaf and lamb’s quarters around the boundaries of your growing areas. Leaf miners will be attracted to these plants, and hopefully will venture no further to find a place to lay eggs.

Purchase some Diglyphus isaea – a beneficial wasp that kills mature leaf miners before they can lay eggs. These predatory wasps are only 2 millimeters in size, and do not sting human beings.

Once you establish a colony of the D. siberica wasps they will start dining upon leaf miners and other small destructive insects.

When one of these wasps stings a mature leaf miner, they immediately become paralyzed by the toxin carried by the predatory insects. The wasps also lay their own eggs in the leaf miner larvae to kill them.

The predatory wasps lay between one to five eggs next to the clutch of the paralyzed leaf miner larvae. Once the wasp eggs hatch, they eat the leaf miner larvae – eating them from the outside in.

The mounds are believed to be a protective measure to ensure the young wasp larvae are not harmed from the drying leaves and fungus as they morph through the pupation process.

The entire lifespan of these predatory wasps is only about five weeks – two of which they spend developing into mature insects.

Typically, the predatory wasps are sold as adults to facilitate the rapid development of their colony. To prevent a leaf miner infestation or to kill an existing one, expect to need approximately 500 to 1,000 predatory wasps per acre.

It is recommended to stagger the release of the wasps due to their short lifespan. They can also be released inside of greenhouses to deal with leaf miner and other small destructive insect infestations.

One of the best ways to naturally get rid of leaf miners is to use neem oil. This type of insecticidal oil does not kill infestations immediately and works best as an early prevention measure.

Have you ever dealt with leaf miners in your garden? How did you get rid of them?

2 thoughts on “How to Identify, Treat and Get Rid of Leaf Miners”

"Hi! I'm Kendra. I'm a wife, mother, and homesteader. I love everything that has to do with simple living. I'm a canning instructor, an avid gardener, and a constant learner of old-fashioned skills. Here is where I share it all. Welcome to the adventure!"
How to Control and Get Rid of Kissing (Assassin) Bugs
The Most Deadly Predators On The Homestead
So, Does Irish Spring Soap Repel Chipmunks?
So, Does Irish Spring Soap Repel Roaches?
10 Chicken Predators and How to Keep Them at Bay