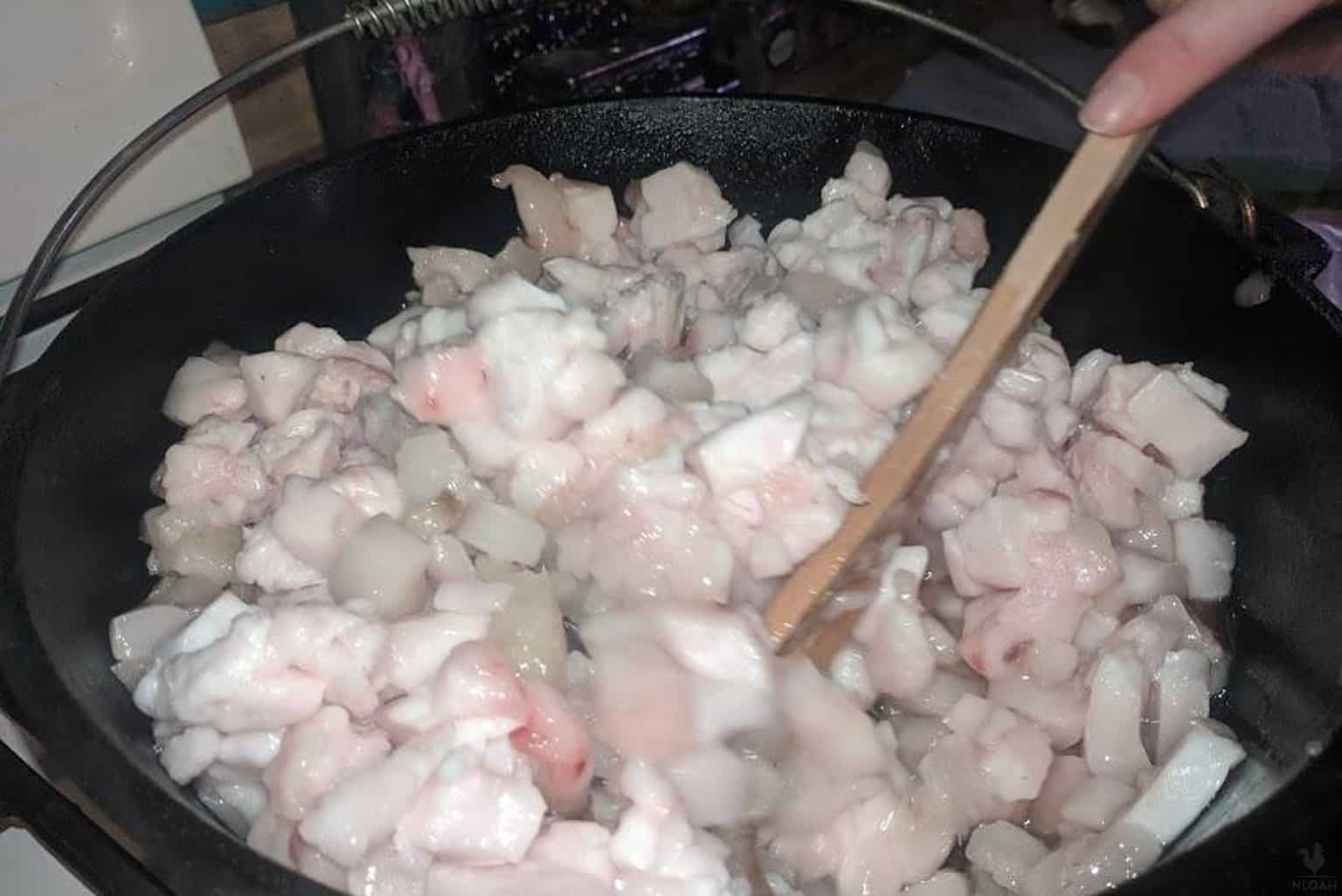 Lard is a once-popular cooking ingredient that has been around for centuries. But with so many things, it has fallen out of favor today in place of “modern” industrialized oils and other trickery.

Many of us, your author included, can remember our parents and grandparents keeping a big jar or crock of lard handy around the kitchen, where it would make regular appearances at almost every meal.

From making killer biscuits and pie crusts to greasing up a skillet to put a sear on a juicy pork chop, lard got it done and it is making a comeback.

Lard is sustainable, much healthier than the public was led to believe, and all-natural in many cases.

But being essentially rendered pig fat, the subject of spoilage is once again the topic of debate. So, does lard go bad? And how should you store the stuff?

Yes, lard can and will eventually go bad, turning rancid. Depending on storage conditions you should get 6 months to around a year from your lard before it expires.

Keeping lard in an airtight, cool, and temperature-stable condition is essential to long life.

Yes, it is true, in what is sure to be a shock to some of the older folks reading: lard does not last forever, despite what our grandparents may have told us.

But honestly, it doesn’t have to be a stressful thing as lard will last plenty long enough for us to use it up so long as we use it regularly.

The rest of this article will tell you what you need to know about keeping lard in your kitchen.

What is Lard, Really?

Lard, simply put, is rendered fat from pigs. It has been used in cooking since time immemorial and was originally prized for its stability at room temperature, meaning you didn’t have to worry about your lard turning solid like butter or margarine when chilled.

Lard can also impart a mild flavor that is similar to, but distinct from the more popular oils we use today such as canola, vegetable, and olive oil.

That’s it. Assuming it isn’t adulterated when produced and clarified at some factory, lard is entirely natural and a fine ingredient in all manner of delicious dishes.

Where Can You Get Lard?

In the old days lard would have come from your butcher who would render it down from leftover pork fat into a usable product.

But today, as we move towards industrialized ingredients, you’ll find lard sold in blocks or jars at grocery stores.

Be sure to read the label: some products that call themselves “lard” may be anything but, and include other oils or chemicals like stabilizers or even colorings so make sure you get a pure, real product.

You can also buy 100% natural lard online or at farmers’ markets. For a truly all-natural product, this is the way to go if you can find it and trust the source.

Lastly, you can make it yourself at home if you are patient and willing to put in a bit of work.

Yes, it can! If stored improperly or kept too long lard will go bad, turning rancid and becoming unsuitable for use in cooking or for anything else.

Care must be taken when you store lard to make sure it is not exposed to heat, light, or air which will cause it to spoil more quickly.

Lard is also especially sensitive to temperature fluctuation, so you never want to keep it anywhere it will warm up, like next to the stove, or on the counter where it might catch sun or cool drafts from a window.

How is Lard Usually Stored?

This is the great debate, one that rages to this very day. I have seen lard stored in an old coffee can with some parchment paper rubber-banded on the lid, and I have seen it kept in airtight jars in the fridge.

Folks swear up one side and down the other that it, at turns, does or does not need refrigeration.

It can be confusing and a little intimidating to make the switch to lard yourself when you get such conflicting answers. What’s the real story?

Lard should be stored in a cool, dark place in an airtight container, preferably glass or stainless steel if you have it on hand or else a high-quality plastic one.

Plastic containers are not ideal as some chemicals from the plastic can interact with the lard and cause off flavors or even promote spoilage. That’s it.

Depending on whether or not you refrigerate, you can get anywhere from 6 months to around a year from your lard before it goes bad. Note the shelf-life will be quite a bit longer if refrigerated.

How Can You Know Lard Has Spoiled?

The easiest way to tell if lard has gone bad is by its smell and appearance.

This means it is starting to go rancid: If the lard has an off-odor, or has taken on an unusual color, it’s time to toss it and get a fresh batch.

Additionally, if you find any dark spots or other strange patches this indicates the presence of mold or other microbial growths that are bad news.

Resist the temptation to pick the spots out, stir it, or try to otherwise salvage a bad batch of lard: throw it away, and err on the side of caution.

Bad lard can give you food poisoning, or at the very best a stomachache, so it’s best to play it safe.

Should Lard Be Refrigerated?

It’s really up to you: lard does not have to be refrigerated (though it helps) and you don’t have to leave it on the counter or in a cabinet, despite the protestations of some purists.

That said, it is still safe at room temp so long as it is tightly closed and kept safe from temperature fluctuations as described.

If you do want to refrigerate your lard, you don’t need to change much: just be sure to keep it airtight and in a glass or stainless steel container.

Can You Freeze Lard?

Yes, you can, and this is the best way to get the longest possible storage life from your lard. However, you’ll need to know a few tips and tricks to ensure your lard stays good.

First, make sure it’s well rendered, purified, and free of any chunks or bits that might contain water: water is definitely the enemy when it comes to lard and freezing.

Also, be sure to pack your lard tightly in whatever container you choose, be it ice cube trays for convenience, a tub, or even wrapped in parchment paper.

Finally, don’t re-freeze your lard. This is a one-and-done operation, as re-freezing your lard will cause it to degrade in taste and quality.

Though freezing your lard makes it less convenient to use straightaway, you should know that it will act and taste normal once it thaws, and you will benefit from a much, much longer shelf life.

Can You Reuse Lard if You Cook With it?

You can, but you probably shouldn’t. Lard that has not been heated beyond 350F or so is probably fine to collect and store, but keep in mind that this can cause trouble.

First, lard that is heated excessively will start to break down and become rancid more quickly, and this can even happen if it’s stored in the fridge later.

Second, if you put it back in the container with the rest of your lard you’ll likely be contaminating it with the food particles and other debris from your cooking.

This means that you’ll be shortening its storage life, and it could even promote rapid spoilage.

Lastly, lard can easily absorb flavors from whatever food you are cooking with it, so if your future dishes comes out tasting off this could certainly be why.

The best advice here is to use fresh lard each time you cook, so your dishes and the storage life of your bulk lard are not affected. Lard is not particularly hard to come by and is, of course, totally renewable.

It is always good to try and be frugal, but attempting to save a few cents worth of lard might end up costing you the whole batch!

"Hi! I'm Kendra. I'm a wife, mother, and homesteader. I love everything that has to do with simple living. I'm a canning instructor, an avid gardener, and a constant learner of old-fashioned skills. Here is where I share it all. Welcome to the adventure!"
10 Foods to Never Dehydrate and Why
How To Freeze Tomatoes
So, Is Dehydrated Food Good for You?
Can You Dehydrate Jello / Gelatin?
How To Freeze Potatoes