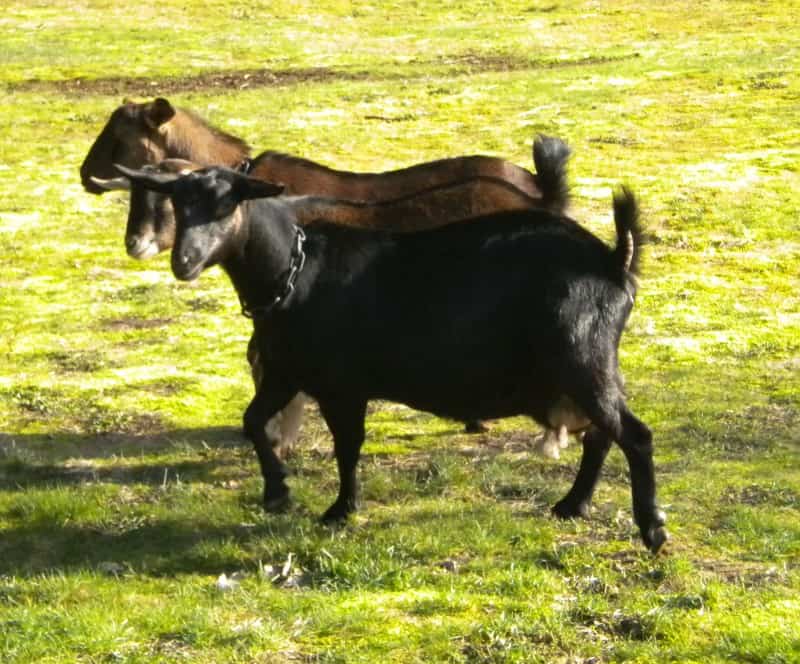 Have you ever heard of Kinder goats? Most folks have not, and that is a true shame. This small dual purpose goat breed has a lot to offer self-reliant families on homesteads both large and small.

Kinder goats are a miniature to small size type of goat that not only makes an excellent “farm pet” and a 4-H project animal, but is also both excellent milker and meat goat.

This dairy goat breed was created in Snohomish, Washington in 1985, but has largely gained only regional fame in the decades since… but that is changing.

What Are Kinder Goats?

The first Kinder goat was created by crossing a Pygmy goat and a Nubian Billy goat – or buck. The Showalters of Zederkamm Farm were already keeping a herd of the miniature Pygmy goats but needed to take care of the breeding needs of the Nubian nanny goats, and does also present on their farm after their own buck died.

The Showalters did not want to take the mature female milk goats off the farm to be bred by a buck they did not own. They decided to give the Pygmy Billy goat a shot, and see if such a breed could be successful and see what the kids stemming from the couplings would develop into.

Breeding the miniature Pygmy goats to the larger standard stature Nubian goat was not an easy feat to accomplish. The Showalters took advantage of some sloping land on the Zederkamm Farm and used some logs to establish a spot with the proper height and angles for breeding to take place.

The first kiddings of Kinder goats took place on June 30 and the Fourth of July in 1986. All three of the kids were females. It was not until the following year that the first male Kinder goat was born.

Today, there are more than 3,000 Kinder goats in the United States, and these small meat and dairy goats even have their own club – the Kinder Goat Breeders Association.

Teresa Hill, one of the recipients of the first Kinder goat kids from the nearby Zederkamm Farm, became so enamored with the efficiency and quality of the milk these goats produced that she helped found the Kinder Goat Breeders Association.

She, along with fellow local female goatkeepers, Kathy Gilmore and Daralyn Hollenbeck, created the organization in an effort to promote and start a herd registration book for this new quality dual purpose goat breed. There are now more than 50 Kinder goat herd names registered with the association.

When building a pen to house this dual purpose breed, be mindful that their smaller size could make them even more susceptible to predators. Most keepers do not disbud Kinder goats as kids to allow them at least some measure of protection against both domestic and wild predators.

The fencing around a Kinder goat pen should be four to four feet tall to deter the climbing tendencies that likely stem from their Pygmy goat heritage – as well as to keep predators out.

Remember to keep the openings small to prevent the Kinder goats from poking their heads out through them and getting stuck. Use wood boards and hardware cloth for that.

A goat stuck in a fence is an easy kill for predators. When stuck in fences, goats will become frantic and can perish after hanging themselves or breaking their necks.

Do not let their smaller stature and docile demeanor fool you, Kinder goats are strong. Even the scratching goats like to do on pen fencing can wear the barrier down over time, allowing them escape.

It is best to add some electrical fencing on the inside of the pen to deter the herd from even venturing too close to the fence.

A bored goat can become a destructive or aggressive goat, as a rule. To keep Kinder goats (and all other breeds, too) stimulated both mentally and physically, create a “playground” inside of the pen.

Logs, tires, wood swings, empty barrels that are nailed to stumps to make them stationary, and large rocks are just some economical ways to make a goat playground to satisfy their natural climbing and romping urges.

Always make sure the playthings are stationary and positioned in the middle of the pen so they do not become a tool to stage a jumping escape.

Kinder goats require a typical goat stall or barn for protection from the elements and predators.

The goat living quarters should be as draft free as possible, and have straw for bedding that is changed on an as needed basis. This is to ensure a clean living environment to deter the growth and spread of bacteria through animal droppings, waterers and feeders that are also regularly cleaned.

If your goats are not going to live in the main livestock barn with other animals, you can save money and space by combining a goat shelter with playground items.

A separate and secure nursing stall(s) for use by nannies when they are kidding and during the first few days to weeks of the new kids’ lives is also highly recommended.

I also keep a quarantine stall and a small pen area away from the main goat barn to separate new arrivals and sick or injured goats from the rest of the herds.

How to Start a Herd of Kinder Goats

There are basically two ways to create your very own herd of Kinder goats. But first, you must decide if creating Kinder kids with a pedigree is important to you.

Going this route will cost a bit more money, typically, but registered goat kids will sell for a higher price and are necessary if you want to show the herd, join a formal association, and perhaps even to participate in some 4-H events.

Once you have looked at your budget, available goats in your area (or factored in the cost of driving to a breeder’s farm or having the Kinder goats shipped) you can move along with the herd development plan.

The first option for creating a herd of Kinder goats is to use or purchase a Pygmy Billy goat and mating him with a Nubian doe or with a nanny goat.

If you go about the breeding process form the other way around, there will be undue hardship placed on the far smaller female Pygmy goat because of the size differences between the two breeds.

Inspect the Nubian doe or nanny goat being used carefully before breeding. She should be stocky (to help foster the dual breed characteristics of a Kinder goat), have a healthy udder and teats, and boast a solid milking history.

The second way to start a Kinder goat herd is quicker, easier, but most likely a more expensive option. Buying either a pair of registered or unregistered Kinder goats from a reputable breeder can cost between $150 to $250, on average.

Regardless of how you choose to get started in Kinder goats, odds are it will be both a rewarding and profitable homesteading adventure.