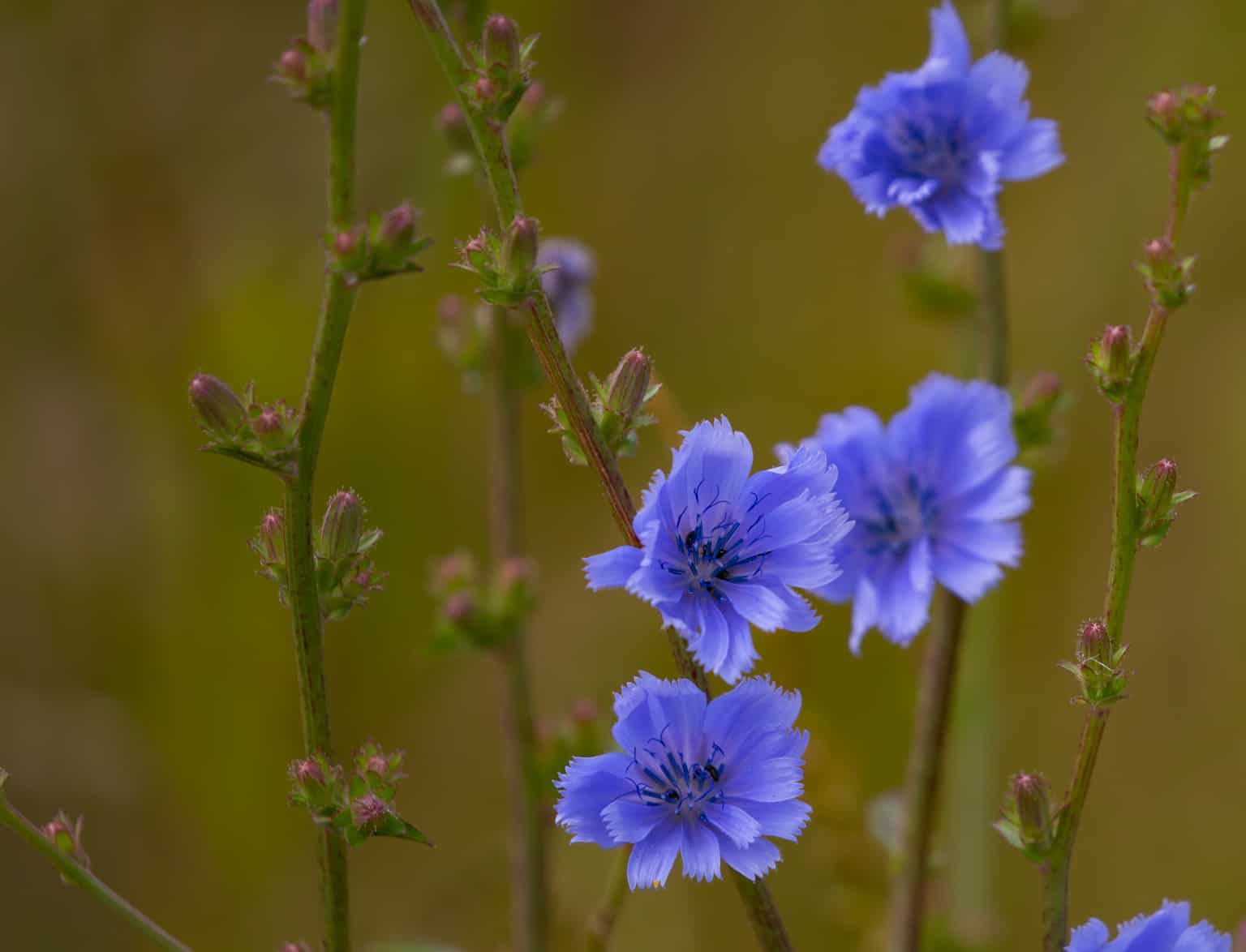 Cichorium intybus or common chicory is a member of the Asteraceae (daisy) family. It’s a perennial herb that typically has blue flowers – rare instances of chicory plants have white or pink flowers.

The common chicory is native to Europe and the Mediterranean, and was introduced to the USA sometime in the 19th Century.

There are a variety of uses for chicory, but is chicory actually edible?

Yes, all parts of the chicory plant are edible. Due to their woody smell and nutty flavor, the roots are typically used to make coffee. The leaves and shoots can be eaten raw or cooked and served as or added to a salad.

Certain breweries add a touch of chicory to their stouts to give them a coffee-like flavor.

As previously stated, the common chicory plant is native to Europe and the Mediterranean and came to the USA in the 19th Century. It’s grown in the Netherlands, Belgium, Germany, France, and to a lesser extent in North America.

The plant features a fleshy taproot with a long, rigid stem and lobed, toothed leaves which resemble the leaves of a dandelion plant, and which grow around the base of the stem. Chicory plants typically reach heights of 3 to 5 feet (1 – 1.5 meters).

There are a few different culinary uses for chicory – both the roots and the leaves. These uses include:

I happen to enjoy my coffee, so imagine my delight and amusement when I read that chicory roots can be used as a caffeine-free coffee substitute. It’s also added to certain coffees to add color and enhance the flavor. Certain breweries add a touch of chicory to their stouts to give them a coffee-like flavor.

As far as the leaves go, you can eat them wild if you like but they’re incredibly bitter which is appreciated in parts of Italy and Southern India. The leaves are used as a spinach substitute in Albania, and served as a salad coated in olive oil and lemon juice in Greece. If you want to reduce the bitterness, you can cook the leaves and discard the water.

Another culinary use that is aimed at livestock is as a fodder plant.

Which Parts can be Eaten?

All parts of the chicory plant are edible. Due to their woody smell and nutty flavor, the roots are typically used to make coffee – in fact, chicory coffee is considered a staple of New Orleans – but you can also cook them like parsnips.

The leaves and shoots can be eaten raw or cooked and served as or added to a salad.

What is the nutritional value of chicory? Well, I’m glad you asked; here’s a quick breakdown:

Okay, so to recap:

"Hi! I'm Kendra. I'm a wife, mother, and homesteader. I love everything that has to do with simple living. I'm a canning instructor, an avid gardener, and a constant learner of old-fashioned skills. Here is where I share it all. Welcome to the adventure!"
Wild Lettuce Lookalikes - 6 to Watch Out For
13 Weeds That Look Like Carrots: Wild Carrots, Queen Anne’s Lace, Deadly Hemlock
Goldenrod Wildcrafting: How To Make a Salve and Infused Oil
Foraging for and Using Milkweed
Are Wild Strawberries Edible?