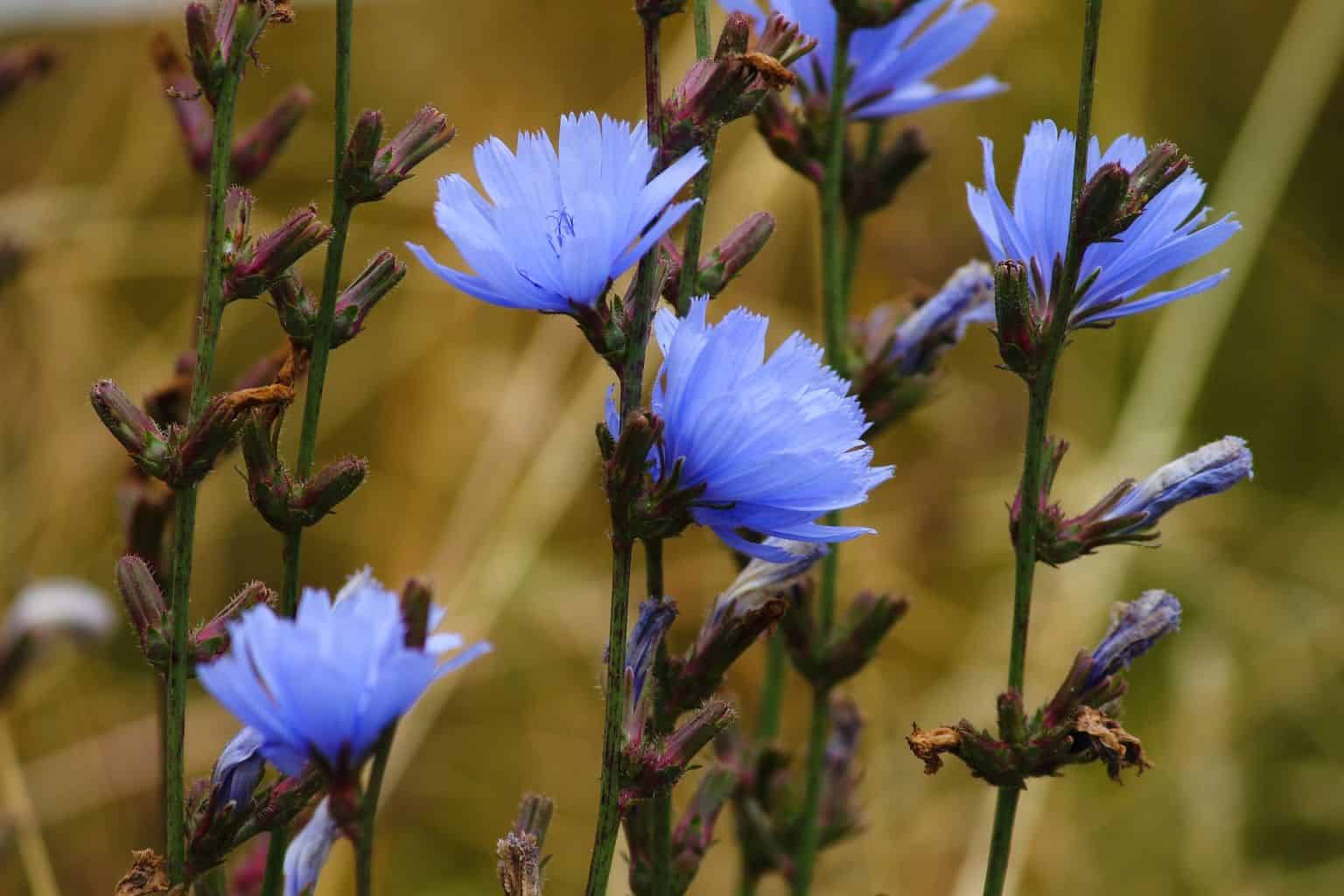 Chicory plants are often foraged in most regions of the United States as a wild edible and medicinal.

But, if they do not happen to grow where you live because of either the climate or urban environment – or simply because you want more chicory plant than you can find, it is quite feasible to cultivate this hardy and beautiful plant at home.

Although chicory was once regularly cultivated in gardens alongside vegetables still common today, it is now primarily grown by herbalist and farmers. Chicory makes a nutrient rich, easy to grow fodder for mosts types of livestock.

Chicory plants are a woody perennial that are available in multiple varieties. It is in the same plant family as sunflowers, dandelions, yarrow, lettuce, chrysanthemums, artichokes, and dahlias. The plant is most often cultivated for its roots and leaves. Because of its deep taproot and love for tightly compacted soil, chicory is a highly drought tolerant plant.

From a nutritional standpoint, a chicory plant is a powerhouse. It contains more polyphenols than spinach. A single cup of chicory possesses 235mg of polyphenols – that the number found in Popeye’s favorite muscle building treat.

This naturally occurring compound can help reduce swelling, promote cardiovascular system protection, and possibly even fight cancer, according to a report by a Journal of Nutrition report.

Even though Chicory has a bitter taste, when it is used in baking and cooking recipes that also include sugar, it may increase the sweetness of the sugar or stevia about 100 times its normal taste.

How to Grow Chicory Plants

There are two ways to grow a chicory plant – forced and non-forced. The forcing process is rather lengthy and requires the digging up of the taproots from the plant during the winter and storing them in sand.

About four weeks after being stored in sand, a chicon will have emerged and be ready for harvesting. You snap the chicon free from the taproot and leaves the rest of the root in the sand to spawn another crop of chicons.

Even though chicory plants tend to be exceptionally hardy, some common pests and diseases can still wipe out your growing crop.

During a particularly bad slug or snail infestation, slime develops across the plant leaves, and the individual leaves are sometimes shredded, as well. To deter snails and slugs from getting near your chicory plants, sprinkle wood ash and – or cracked eggshells around the perimeter of the plant.

The wood ash sucks the moisture from the insects, and the eggshells scratch their soft underbelly in a manner that is uncomfortable enough to often get them to reroute the path of their feeding frenzy.

Saving the seeds from wild chicory plants to cultivate is often done with moderate levels of success. There are several varieties of domesticated chicory that you will probably have far more success with when planting in a raised bed or pots.

It is possible to cultivate chicory inside during the winter months, but you must allow the plant to be exposed to a grow light or a window that gets considerable light and heat. The plants tend to grow in bush fashion, so using a three to five gallon pot is highly recommended.

"Hi! I'm Kendra. I'm a wife, mother, and homesteader. I love everything that has to do with simple living. I'm a canning instructor, an avid gardener, and a constant learner of old-fashioned skills. Here is where I share it all. Welcome to the adventure!"
How to Grow Bee Balm on the Homestead
How to Grow Zucchini Step by Step
The Best Companion Plants for Carrots
Harvesting Black Walnuts
How to Build a Herb Spiral