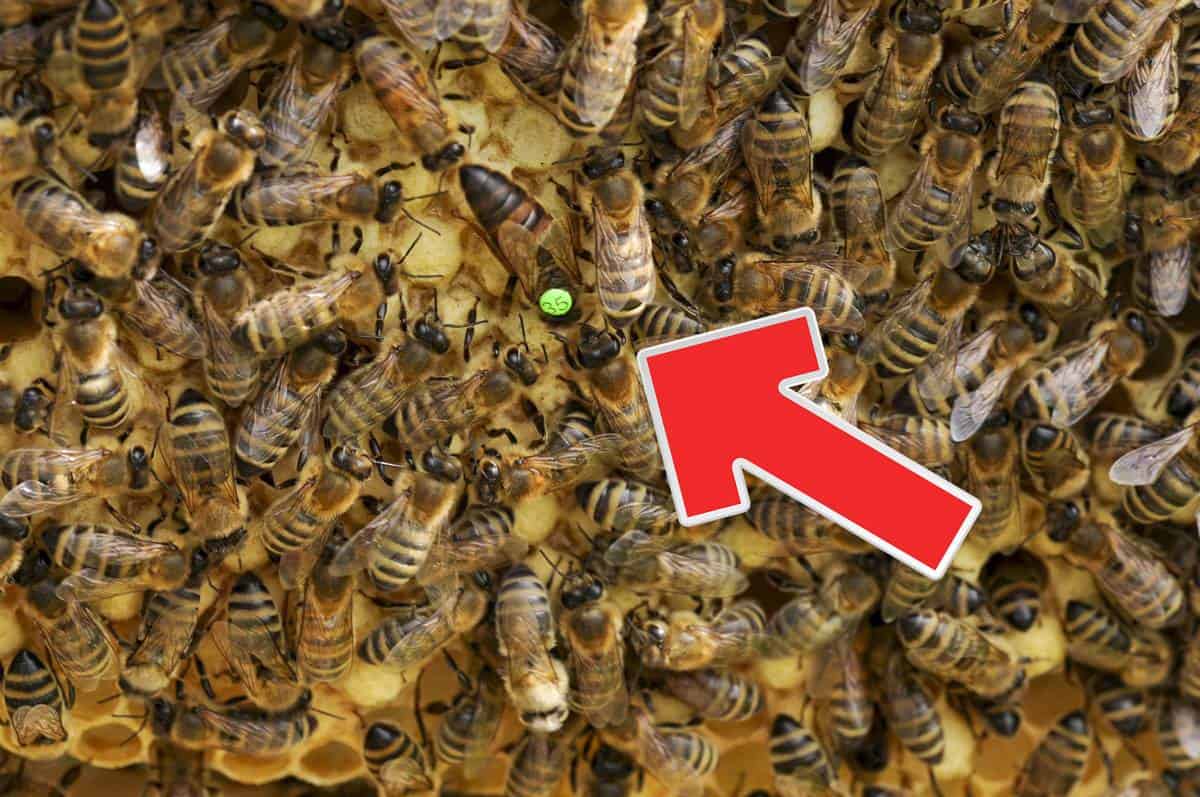 Searching for the queen inside of a hive is often a daunting challenge – even for seasoned beekeepers. The bulky and shiny nature of a queen bee’s physique makes her discovery an easy one – but only if you get really lucky.

Most of the time, the queen is fairly naturally camouflaged amongst her subjects.

Each queen bee has her own distinct personality. Some queens prefer to mingle among the other bees and remain in a position of authority – much like a medieval monarch sitting on a throne.

Yet, other queens like to remain in a secluded place of safety, nestled among just a few other bees in the corner of the hive.

What Exactly Is A Queen Bee?

A queen bee is the ultimate leader inside of a bee colony. She is the mother of the vast majority – if not all, of the bees inside of the hive. A honeybee hive must have a present and healthy queen in order to survive. Once the queen bee gets old or dies, the hive will too if a new queen does not emerge or is not introduced in a very timely manner.

It is essential for a beekeeper to learn how to identify a queen bee to regularly check on the health of a hive. Marking the queen after you find her the first time is a simple task and one that will save time during later hive inspections.

There are three different methods that you can use alone (or more often) in conjunction with each other to identify a queen bee.

15 Ways To Identify A Queen Bee

I Found The Queen Bee, Now What?

Once you discover the queen bee you can choose either to do nothing and simply search for her again during the next hive wellness check – or mark her.

Beekeepers often mark the queen bee with non-toxic acrylic paint so she can immediately be spotted and, in some cases, sold. Beekeepers who are not just keeping a hive for the honey, comb, or for pollination of crops, engage in breeding of queens for profit.

Most often, beekeepers who mark queen with paint use a color-coded system so they can identify the origin year of the hive royal. This process helps a beekeeper know when a queen is getting old and a new one will need to be introduced into the hive.

How To Mark A Queen Bee

Newbie beekeepers may have to spend more time searching for and finding a queen than more veterans honey bee keepers, even when following these useful tips.

Do not become discouraged, this is definitely an example of a practice makes perfect scenario. What is most important is the finding the queen, not the amount of minutes or number of tries it takes to do so.

"Hi! I'm Kendra. I'm a wife, mother, and homesteader. I love everything that has to do with simple living. I'm a canning instructor, an avid gardener, and a constant learner of old-fashioned skills. Here is where I share it all. Welcome to the adventure!"
Is Feeding My Bees a Good Idea?
Bee-Friendly Ways to Keep Pests Away from Plants
A 4-Season Health Checklist for your Bees
Mason Bees: Everything You Should Know
50 Things to Teach Your Children About Bees