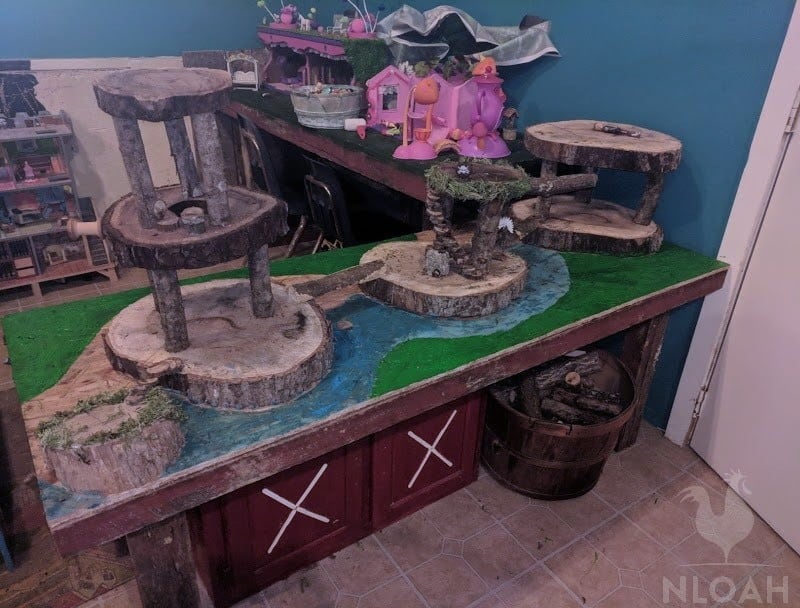 Making your own toys is not only a great cost saver, but such a fulfilling project. As homesteaders already know, there is just nothing like giving or receiving a handmade gift that was diligently worked on for hours by someone you love.

Homemade toys beat the heck out of plastic junk made in China any day of the week.

I love Waldorf-style toys. I just cannot stop marveling at the simplistic beauty of them, be it dolls, play table toys, or doll houses. And neither can my grandchildren.

If you are not familiar with Waldorf toys, they are all made of natural materials wood, cotton, wool, and the like. They correspond with the Waldorf education philosophy that approaches learning from an imagination inspiring journey.

The toys are explicitly designed to not overstimulate already overstimulated modern children. They offer “invitations to play” that are limited only by the child’s own imagination.

In a world where 99% of the toys you see on the shelf at the store are merely extensions of television shows and movies, it is incredible to see how excited my grandchildren become when presented with a Waldorf style toy. The playroom at my house (which doubles as a homeschooling classroom) is a no-tech zone.

The only downside to the increasingly popular Waldorf style toys is the price tag they carry. I continue to get sticker shock every time I come across some delightful new traditional toy item on ETSY or Pinterest.

A Waldorf play village or small world like this one sells for at least $100 on most websites. The more ornate the tree houses, as they are sometimes called, sell for upwards of $300… plus shipping, of course.

As most homesteaders, I am a frugal gal. I refuse to pay a ridiculous price for anything… especially when I can make it myself for a fraction of the price on some elite toy boutique online.

Can you believe people would pay such a high price for something they could make themselves in a single afternoon?

So, I enlisted the help of my beloved husband, son-in-law, and the son and nephew of a friend who do some work around our homestead, to make a bargain basement version of the wood treehouse.

It not only tuned out just as I designed it in my head, but even typically tech-absorbed kiddos ranging up to age 12, just can’t help playing with it, too.

The total cost of the Waldorf small world we made was probably about $30, when I factor in hot glue and craft paint I already had on hand. The largest expense was the two cans of spray foam insulation it took to make the cave.

The foam spray cost around $5 each. The styrofoam I used to make a form around the cave and in other places in the village came either from Dollar Tree or was packing saved from deliveries.

We worked on the Waldorf treehouse over the course of the weekend as we had spare time. The spray foam insulation had to dry overnight to be hard enough to paint.

I am not in the process of crinkling leaves the kids collected to sprinkle over the top like you would do confetti – after spraying the cave with adhesive, to add more interest and depth to that feature.

The grandkids and other children who have already checked out the Waldorf village love it so much my Bobby hasn’t even complained about how much firewood I pilfered from the wood box to have it made.

The supplies needed to make a Waldorf small village are just standard issue power tools that are commonly found in any homesteader’s garage:

Choose the Waldorf treehouse height you want to create, and how many different “towers” you want to make. We used hardwood for durability, and to make it more stable which, of course, was a lot more difficult to drill through.

We then cut the wood about two inches or so with a chainsaw. When I say we, I mean one of the guys. I was merely the designer and decorator on this particular project.

Next, gather some straight pieces of branches that you found in your yard or scavenged from a tree that was cut down for firewood, to serve as supports, to make bridges from, etc.

We used a compound miter saw to cut the branches to the dimensions desired, and to make sure they were level. One forked branch was kept in reserve to be drilled into the side of a wood base to serve as a support for a swing.

Choose how you want the structure to look, and attach the straight support legs to the base and then to the second and story.

We drilled a hole into the wood before putting in the screw so it would be recessed. We used a combination of 2-inch and 4-inch screws depending upon the depth of the wood base.

By drilling the hole first to recess the screw it prevented little fingers from getting snagged on the screw head and also gave the Waldorf structure added durability and stableness.

The drilling of the holes into the hardwood took a good bit longer than actually cutting the wood bases themselves.

It took us about three to five minutes to attach each support leg to the base, and then about the same amount of time to the second story.

If you are also using hardwood, you too might get a drill bit stuck once or twice, and need to pull it out. Thankfully we were able to remove the bit without bending or stripping it.

The guys stood and then jumped on the Waldorf towers after they had a second level to make sure they would stand up to even, shall we say, energetic play.

Complete all of the treehouse towers, sand down any rough edges if necessary, and brush away the sawdust before painting or staining the Waldorf play structure.

Now it is time to decorate – or you can leave the wood play structure exactly as it is. I had a table built out of scrap particle board, and some fencing from an old corral to house the Waldorf small world.

I painted the particle board green and blue to create pretend grass and a lake that winds through the play area.

Above you can see how the table looked before it was painted. I positioned the structure where I wanted it to go and then painted around it. Sure, a little bit of blue got onto the treehouse, but water splashes in lakes all the time, right?

The branch blocks and homemade barn are situated beneath the table to make the play area more compact. In the background on the other table we built is the fairy village some of you may have read about in an earlier homestead homemade toys article.

Once the Waldorf play structure was in place, it was time to make the mountain. I was just going to duct tape styrofoam for the spray foam insulation to form around, but found this little homemade step stool in the garage and used it, along with the styrofoam and duct tape, to craft into a cave:

Make sure to work on top of a covering you can pitch when you are done, because dripping spray insulation is very difficult to scrape off of anything.

This is how I added the styrofoam and duct tape to form a cave around the step stool:

I pushed several twigs into the spray foam insulation while it was still damp, making sure they connected with the styrofoam:

I added faux leaves to the little trees on the cave later:

Here is how the cave looked when it was attached using L brackets, to the third Waldorf tower:

Decorating the Waldorf play area took longer than making it, but in my opinion, it was definitely the most fun part.

How you decorate it entirely up to you, of course, but here are some photos of how our structure evolved.

We used the miter saw to slice a straight branch in half, and turn it into a bridge that connected the towers. We screwed the bridge ends into each wood base.

We also added a pulley to lower and raise items from the water level to the second story of the first tower.

I used hot glue to use the tiny wood rounds to make stairs going from the base of the bottom tower to the second story and to connect an unattached base to the first tower:

I also used the little wood rounds to make a tiny chair and table that was hot glued to the second story base of the first tower:

I created furniture and decorations so they would be the right scale to play with the ever growing collection of clean and new to us Playmobil figures I buy super cheap off of eBay.

After the first layer of paint dried, I added some darker blue and that was brushed on with a sponge brush lightly to created depth and some texture to the water:

Cut off the top two thirds of the water bottle. What you are left with will resemble a cup or bowl shape from the bottom of the water bottle. This part of the bottle will serve as a carriage or basket to place dolls or figures in – like the basket on a hot air balloon.

Poke two holes near the top rim of the cup shaped bottle bottom on each side. Run twine or string through the holes to the basket can be used like a monorail for little people to “ride in” from one side of the village to the other:

I used empty tulle rolls to turn into bases for some Dollar Tree fake flowers. I used floral wrap, also from the dollar store, to cover the cardboard. I used hot glue to attach the bottom of the roll to the plywood table:

I used twine to attach a folded piece of cardboard that had faux moss glue to it to make a little swing:

Here is a video tour of the completed , (sans the rope bridge I plan to add this weekend) Waldorf small world:

The play area side of the room was definitely looking well played in during the videos, sorry about that. I was too busy working on decorating the Waldorf treehouse set to remind the children about the clean up rules.

What do you think about our super low cost version of a classic Waldorf toy? Please share your thoughts in the comments section below and, as always, I will try to offer and tips and advice I can if you could use a helping hand making homemade toys on your homestead.

"Hi! I'm Kendra. I'm a wife, mother, and homesteader. I love everything that has to do with simple living. I'm a canning instructor, an avid gardener, and a constant learner of old-fashioned skills. Here is where I share it all. Welcome to the adventure!"
How To Make Waldorf Toys: Branch Blocks And Memory Matching Blocks
How To Make a Fairy Dollhouse
How To Make A Boys Dollhouse
48 Adorable DIY Toys You Can Make Today
How to Needle Felt Animals, Dolls, and so Much More