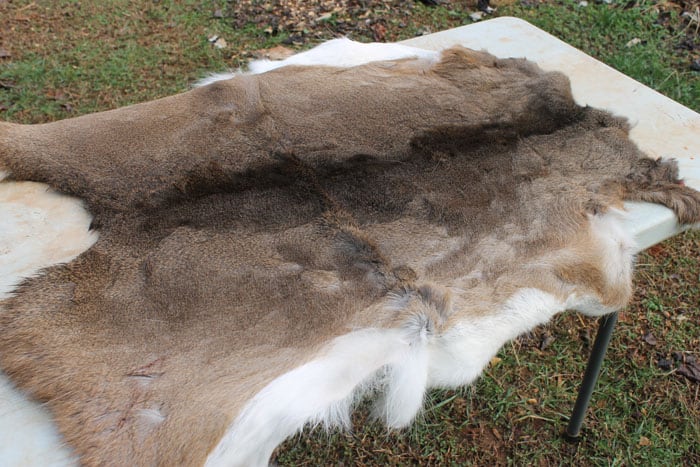 Jerry brought home his first deer over Thanksgiving weekend. I was so proud of him! We’ve been out of red meat for a few months now, due to the climbing cost of beef being no longer justifiable to purchase. Having meat again felt like a windfall.

Watching my husband carrying that buck back up to the house filled me with so much gratefulness and pride in his ability to provide for our family. I wanted to take a picture of him with his first harvest, but he explained that he wasn’t proud of killing and didn’t want a “trophy photo”. Which I totally respected. We try to teach our children to be respectful of the animal and thank it for the life it gave to nourish us, and never glory in taking the life. We put our hands on the deer and thanked him, and thanked God for his provision.

We hung the deer on the children’s metal swingset frame (which we’d pulled into the woods) and set to work cleaning it. It wasn’t easy for the two of us to hoist the heavy buck up by his hind legs, but we struggled through and managed to secure it with slipknots. We were wishing we had one of those hook thingies that our hunter friend showed us (a Gambrel).

First, we carefully skinned it in order to preserve the hide. I brought the laptop into the woods and pulled up a YouTube video and an article on how to field dress a deer, which we consulted as we worked side by side.

The laptop battery got depleted pretty quickly though, and I was really wishing I had a book on butchering. Jerry had helped a friend clean a deer once, but it has been years since he did it and couldn’t remember exactly how to go about the process without ruining the meat. There are definitely things you want to avoid doing when cleaning an animal, such as puncturing the organs which could spoil everything.  Not something you just want to wing.

Jerry and I both wore Cut Resistant Gloves, particularly after watching a video by Misty Prepper. Yikes!!

It took us all day to process that deer. We pulled some folding tables into the yard, placed the pieces of meat in coolers and tubs of cold water, and worked at removing the meat from the bones, skinning off the silverskin, and chopping the meat into packageable pieces. The bone saw that came in our butchering kit was a piece of junk, and took forever to get through the bones. I’ll have to put a good butcher saw on my list of things to get. I also had a lot of trouble trying to grind the fresh meat in my new meat grinder. (See my update on how to grind fresh meat!)

In the end we filled our freezer with 40 lbs of venison. I don’t have a FoodSaver, so we just sealed them up in ziploc bags and pushed as much of the air out as possible by hand. (Usually I suck the air out of freezer bags with a straw, but not with raw meat.) I saved the large bones to make stock, and the organs for dog food.

Because it took us all day to get through the meat, the hide was pretty much cast aside for the day.

That night I did some reading up on how to tan a hide, and learned that I really should have worked on scraping it clean and salting the hide right away.

How did the pioneers and Native Americans manage to clean and process a deer AND tan the hide in one day? I wondered. Lots of practice and help, I’m sure. 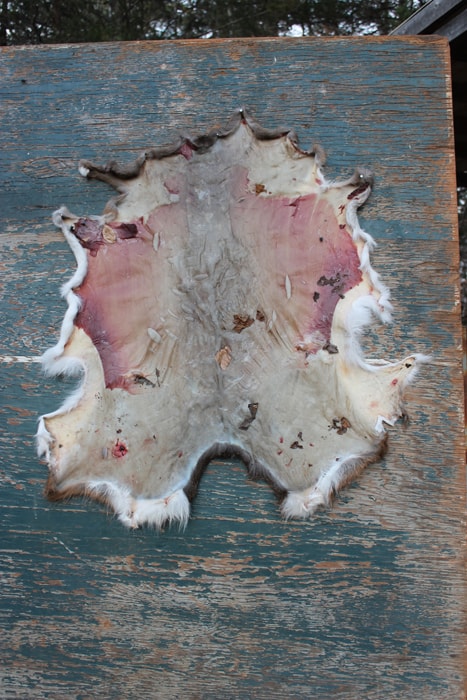 Hopeful that the hide could still be salvaged, I got up early the next morning and set to work on trying to get it clean. First, I stretched it out and nailed it to a board. The hide was heavy, and I found it easier to lay the board flat on the ground and nail it that way instead of trying to nail it to an upright board. I wasn’t sure what I should use to tack the hide to the board, so I just nailed it up with finishing nails (hoping not to make big holes in the hide). You want to stretch it out as tightly as possible, so that it doesn’t wrinkle.

There were leaves stuck all over the skin where we’d dropped the hide in the woods. They were nearly impossible to peel off after having dried on overnight. 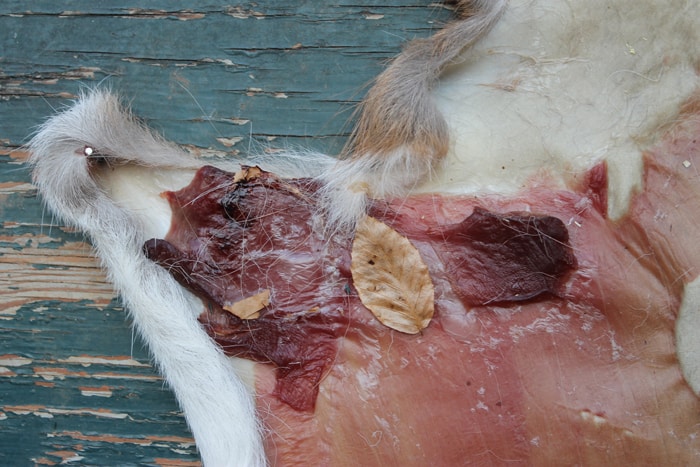 There were still some thick chunks of flesh that needed to be scraped off. As well as plenty of skin to remove. You’ve gotta get every bit of that off the hide, all the way down to the porous layer just beneath the hair roots. 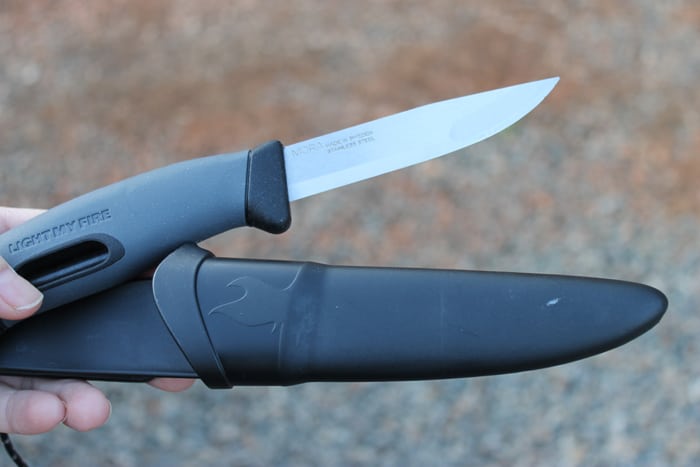 I used a Stainless Steel Swedish Morakniv Knife, which I’d also used to clean and process the deer. LOVE this knife. 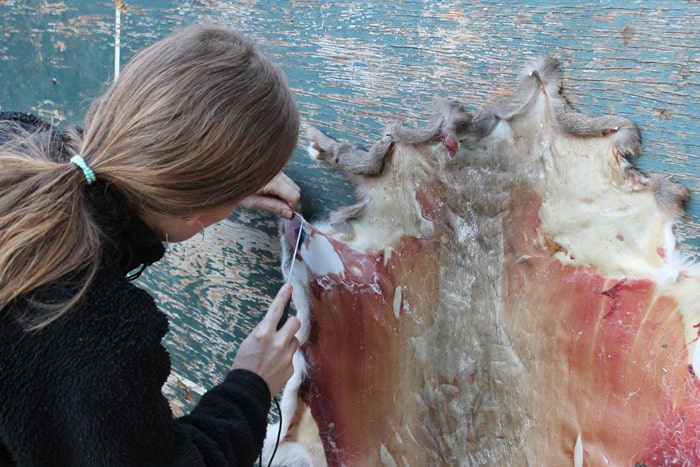 Where the flesh was thick, it was wet enough that I was still able to get underneath it to peel it off. Unfortunately though, the rest of the hide had started to dry and was nearly impossible to skin. 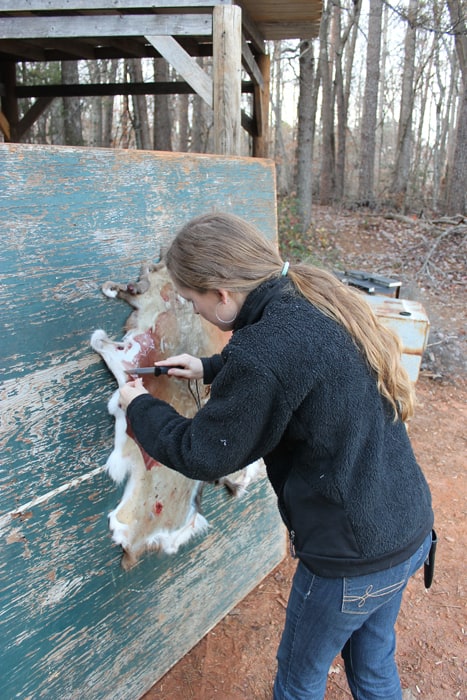 I worked and worked, trying my best to scrape the dried flesh from the hide. But my knife kept getting too deep and I was cutting into the fur. I tried spraying it with a spray bottle of warm water to soften the flesh, but it only got slimy. Eventually, I gave up. Flies and yellow jackets were beginning to gather. Won’t the flies eat the flesh off the hide for me? Or would they just bring maggots?

I was so disappointed that it wasn’t working out.

Then the rain came.

The hide has been out in the rain for three days now. Maybe the flesh will be soft enough to scrape now that it’s soaked? When the rain stops I’ll go check it out and see if I can still salvage the hide.

Any tips from expert tanners out there? Is the hide a lost cause at this point?

If anything, at least I’ve learned a few things. Hopefully next time we’ll be able to process the meat quick enough that I can get to the hide the same day.

Have you ever tanned a hide?