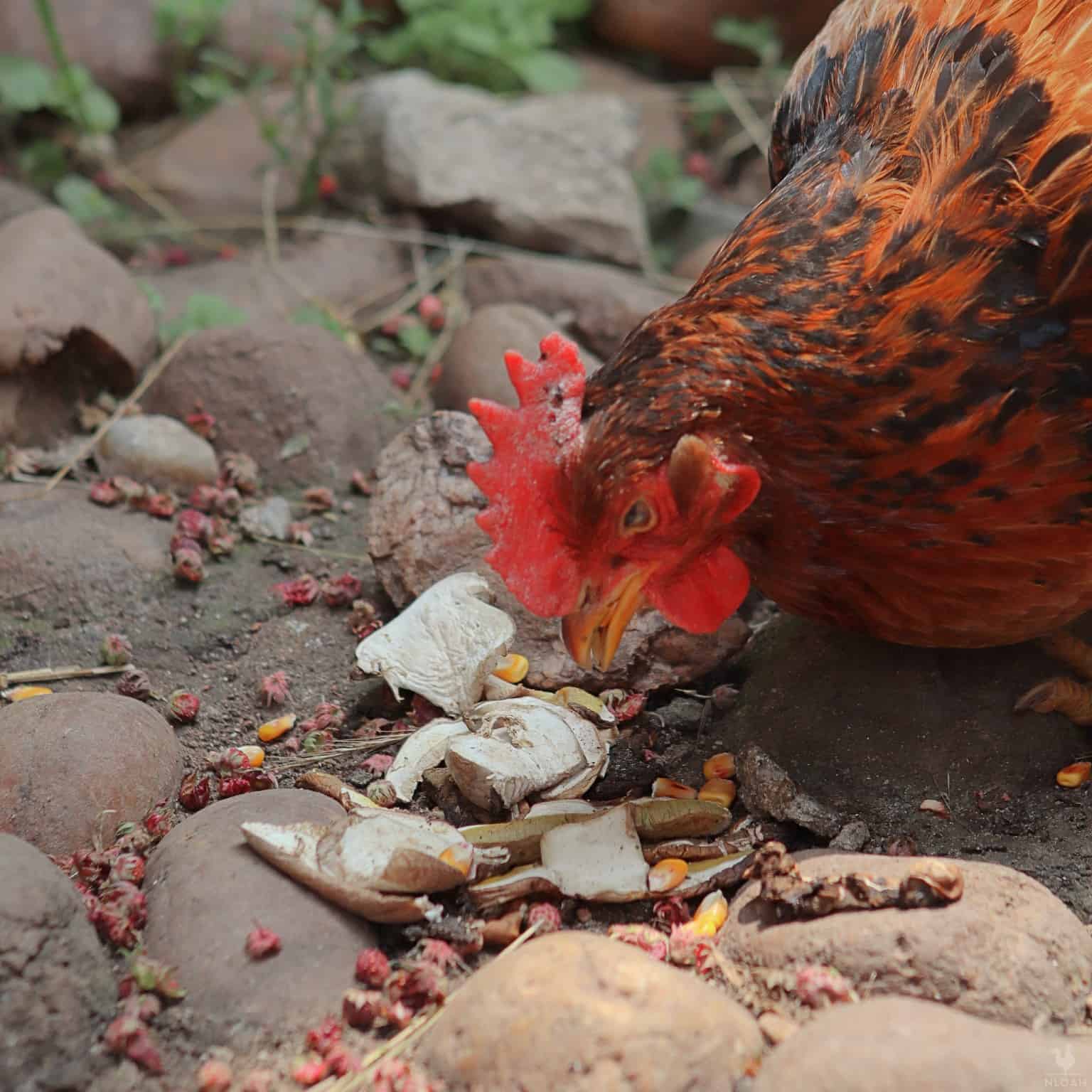 Chickens eat all sorts of things growing in the wild when left to their own devices. It makes sense, then, that their owners would try to replicate parts of their naturally occurring diet with supplemental items.

Yes, chickens can eat mushrooms assuming that they are not poisonous. However, the majority of chickens do not prefer them. If you do have chickens that will eat mushrooms, there are generally nutritious and a decent supplement to their existing diet.

Just because chickens would encounter mushrooms in the wild doesn’t mean they like them or will try to eat them most times.

You might be able to convince your chickens to eat mushrooms, but you’ll have to go about it the right way, and you’ll have to be absolutely certain that you are giving them mushrooms that aren’t poisonous.

There is a tremendous variety of mushrooms in the world, even among mushrooms that are edible or farm cultivated for human consumption.

Accordingly, the nutritional profile of mushrooms varies a little bit though they are generally nutritious.

Considering one of the most common edible mushrooms, the crimini, they have plenty of vitamins and minerals that make them a good supplement to a chicken’s diet.

Considering minerals, mushrooms contain a significant amount of phosphorus, zinc, potassium, and manganese with a little bit of iron and calcium to round out the bargain.

Combined with a useful amount of carbohydrates and a little shot of protein, mushrooms are a nutritious supplement to any diet.

Health Benefits of Mushrooms for Chickens

Mushrooms are one of those foods that chickens, somewhat surprisingly, just don’t like. But if you are able to get your birds to eat them they are nutritious.

Vitamin B2 is great for chickens because it helps them metabolize energy from their food.

This means that they will be able to use more of the calories in their feed for growth and maintenance, rather than passing them straight through.

Vitamin B5 is good for metabolic health as well, but it also has other benefits. It aids in the production of hormones and enzymes and helps with stress reduction.

B3 is good for the digestive system and helps with circulation. B1 is essential for the metabolism of fats and carbohydrates, while folate is important for cell growth.

The mineral payload in mushrooms is similarly beneficial to chickens.

Phosphorus is important for bone health and manganese is a key player in several important enzymes.

Potassium is good for the nervous system and especially for the balancing of electrolytes. Iron is, of course, essential for the production of hemoglobin.

Last but not least, calcium is vital for strong, healthy bones and just as importantly for laying hens healthy eggs- calcium is critical for strong eggshells!

Yes, chickens may eat mushrooms raw but as a rule they do not like them. There’s something about the dense, rubbery, almost squeaky texture of a mushroom that seems to turn chickens off, and it is a rarity you’ll find any chicken giving a whole, raw mushroom more than an exploratory peck or two before leaving it alone.

Do Not Give Your Chickens Wild Mushrooms!

On the subject of raw mushrooms, it is imperative that you never, ever give your chickens wild harvested mushrooms. Many are poisonous, lethally so for chickens.

Compared to domesticated, farm-grown cultivars produced and sterilized environments for direct sale to the public, the difference between poisonous and safe wild mushrooms can be very subtle and surprisingly nuanced.

Misidentification happens all the time, even among experienced mushroom hunters, and sometimes with lethal results.

If you do not have the expert knowledge needed to make the call on wild-sourced mushrooms, you shouldn’t dream of eating them, to say nothing of serving them to your chickens.

Canned mushrooms and other produce of all kinds often have significant levels of salt and other preservatives as part of the canning process, and this will prove to be harmful to the health of your flock.

If, for whatever reason, you are forced to choose between serving your chickens canned mushrooms or raw mushrooms, they are more likely to eat the canned ones since they are cooked.

Chickens can eat cooked mushrooms, and though they may or may not like them in the end it is more likely that they will eat them if they have been gently cooked. Cooking gets rid of that rubbery texture that chickens seem to despise.

If you are planning on giving your chickens cooked mushrooms you must never serve them ones that have been prepared with any other harmful ingredients that could damage their health.

Whether you are cooking the mushrooms with the express purpose of giving them to your chickens or there are leftovers from one of your meals, never give them mushrooms prepared with any oils, butter, salt, sugar or other ingredients they cannot have.

At best, they will be facing weight gain from too many calories and significant indigestion. At worst, it could make them terribly sick or even kill them.

Cooked mushrooms should be gently heated through in a skillet or toasted in the oven before serving to your chickens, nothing more.

Beware of Pesticide on Grocery-bought Mushrooms

Keep in mind that any store-bought mushrooms, though they are certain to be safe and edible for people and chickens alike, are highly likely to have been treated with pesticides and other chemicals.

These chemicals can be seriously harmful for chickens, and many pesticides build up in tissues over time with repeated ingestion, making them an insidious threat.

Make sure you thoroughly wash any store-bought mushrooms prior to preparing and serving them to your chickens in order to remove these lingering residues.

How Often Can Chickens Have Mushrooms?

Your chickens are quite likely to limit their own mushroom intake all on their own, as again, they don’t seem to like them very much.

But assuming that your chickens do or that you can disguise the mushrooms in other food in order to promote their consumption, they should only have mushrooms once or twice a week as part of a balanced, chicken-friendly diet.

Most experts recommend that chickens live with 90% of their total calorie intake coming from nutritionally complete chicken feed, while the remaining 10% can be made up of a variety of wholesome, healthy supplemental foods and treats.

Mushrooms should be included in that 10%, so only given on a limited basis.

Preparing Mushrooms for Your Flock

Preparing mushrooms for chickens is easy enough, but the first thing you should know upfront is it chickens generally detest whole mushrooms.

You’ll want to cut them up into cubes or small pieces to make them more appealing to your birds.

If you are cooking them, chop them up prior to toasting in a skillet or in the oven to make sure all sides are evenly cooked.

You’re likely to have the best success by mixing in the mushrooms with other veggies or other feed in order to disguise them.

Can Baby Chicks Have Mushrooms, Too?

Yes, chicks may have mushrooms, but you’ll want to wait until they’re a little bit older before serving them for the first time.

Around 6 weeks of age is probably appropriate, and keep in mind that chicks have delicate digestive systems that are easily upset by novel foods.

Your chicks should be living primarily on a diet of early-life chicken feed and get only the occasional tiny bit of treat, whatever it is, once or maybe twice a week.

Also, keep in mind that chicks are vulnerable to crop impaction and diarrhea, so keep a close eye on them for any ill effects after feeding them supplemental foods, including mushrooms.

"Hi! I'm Kendra. I'm a wife, mother, and homesteader. I love everything that has to do with simple living. I'm a canning instructor, an avid gardener, and a constant learner of old-fashioned skills. Here is where I share it all. Welcome to the adventure!"
12 Best Herbs To Feed Your Chickens (And 7 Not To)
How To Incubate Poultry Eggs
Snake In The Coop
So, Can Chickens Eat Grape Vines?
How to Butcher a Chicken the Humane Way