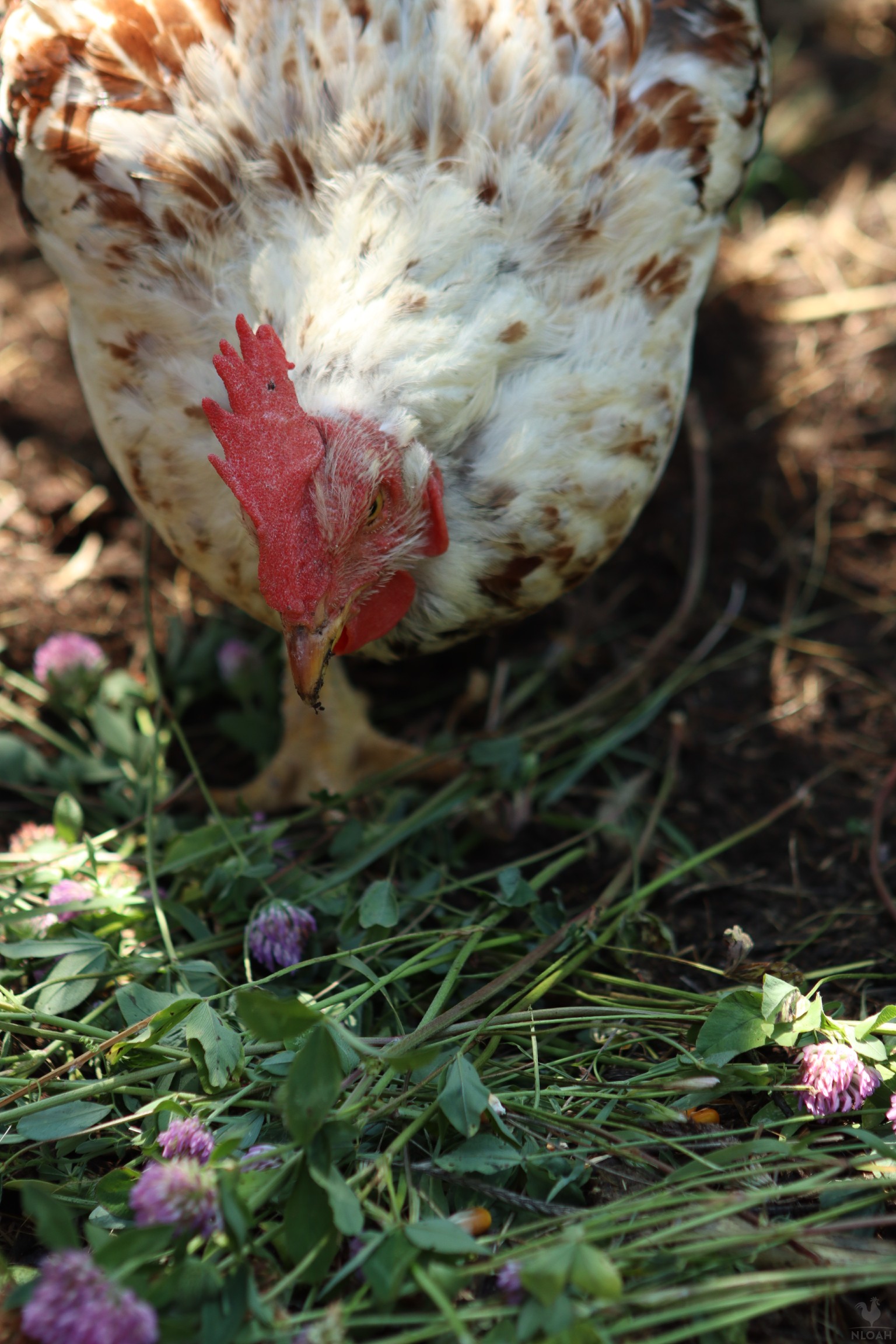 If you give chickens half a chance to forage, you’ll notice that they readily explore their surrounding environment, picking and scratching in the dirt, in the grass, and at all sorts of plants looking for a bite to eat.

You’ve probably noticed your chickens eating grass and bugs before, and also other things out of your yard. Chickens love to eat, but how about clover, can chickens eat clover?

Yes, chickens can eat clover safely with one important exception. Clover is generally healthy and nutritious, and it is so common most chickens will readily eat it given a chance. However, clover hay or silage that is allowed to mold could result in the generation of a deadly toxin that can quickly kill chickens.

Clover is one of those things that is usually underfoot, even if you don’t notice it, but chickens know that it is good for them.

You probably don’t need to do much in order to get your chickens to eat clover but you must use caution if any feed containing clover is moldy. Will tell you everything you need to know in the rest of this article.

Clover might just seem like another weed or grass underfoot, but it actually contains a fair bit of vitamins and minerals. Clover is particularly high and vitamin A and B complex vitamins, with trace amounts of vitamins E and K.

Concerning minerals, clover contains abundant calcium, iron, and potassium. Clover also contains enzymes and micronutrients that can help detoxify the blood and the digestive system and can boost circulatory performance.

Health Benefits of Clover for Chickens

Clover is more than just an incidental menu item for chickens and actually has quite a few health benefits compared to other grasses and weeds that they might eat.

Vitamin A is vital for nervous system tissue maintenance, particularly concerning the eyes, and the B complex vitamins are now as always imperative for proper cellular upkeep and metabolic performance.

Iron, as you probably already know, is important for the production of red blood cells and the oxygenation of blood in the body. Potassium helps balance electrolyte levels and energy production.

But perhaps most importantly, clover helps to lower blood pressure and detoxify the blood by neutralizing free radicals.

This is made possible by the presence of coumarin, which acts as a slight blood thinner. However, this coumarin can turn into a hindrance instead of a help if the clover is allowed to get moldy.

We will talk more about that particular problem down below.

Yes, chickens may eat clover fresh and raw, as it grows right out of the dirt. This is the preferred method for serving clover to chickens because it minimizes the possibility of the clover being moldy and turning toxic.

Yes, chickens may eat this most abundant and common kind of clover with no issues.

Yes, they sure can. Although a rare sight in most yards, at least throughout North America, red clover is still completely safe and nutritious for chickens.

Chickens can eat white clover safely. Any color of clover, so long as it is true clover and not moldy, is safe for chickens to eat.

Chickens theoretically can eat cooked clover, but this stuff is rarely cooked for the purpose and essentially never for human consumption.

Accordingly, you don’t need to worry about serving cooked clover to your birds. Just let them eat it right out of the ground.

Although normally never eaten in sufficient quantities to cause problems on its own, poisoning may occur in certain conditions, particularly when the clover is allowed to mold.

This rarely occurs when the clover is growing wild, but in case it is harvested and bailed up with hay or other silage, especially during wet conditions, it is highly likely for it to be contaminated with these molds.

These molds metabolize the coumarin into dicoumarol, a toxin. This toxin severely inhibits vitamin K production in the body when consumed, and it is a vitamin K that is ultimately necessary for the body’s clotting mechanisms to activate.

Accordingly, this means that internal hemorrhaging is prompted, and any injuries sustained by an animal that has ingested dicoumarol are unlikely to stop bleeding. Significant poisoning usually results in death by significant internal bleeding.

That is a bad way to go, and accordingly you should be very cautious about feeding your chickens or allowing them to peck at any hay feed or other silage containing clover, particularly sweet clover.

How Often Can Chickens Have Clover?

Your chickens can have clover periodically as part of a balanced diet, and assuming it grows on your property they are highly likely to consume it whenever you let them out to forage on their own.

Luckily, it is extremely rare for chickens to overindulge in grasses, weeds, and clover in a single serving since they generally stop eating it when they are full.

However, it is worth pointing out that the majority of a chicken’s calorie intake should come from a nutritionally complete chicken feed that has everything they need to prosper.

So long as you are feeding them with a good chicken feed about 90% of the time and letting the rest of their calorie intake come from forage or healthy treats they’ll be just fine.

Preparing Clover for Your Flock

There’s not much to do if you want to give clover to your flock assuming that it grows on your property. Simply let them out, let them roam and they will eat the clover on their own without any prompting.

Can Baby Chicks Have Clover, Too?

Baby chicks may eat clover but you’ll want to wait for them to get a little bit older before you let them try it for the first time.

Chicks have such sensitive digestive systems and suffer so commonly from crop-related issues that there’s no reason to take them off their starter feed until they are about 6 weeks old.

However, once they grow up a little bit chicks will benefit from clover just like adult chickens will and can eat a little bit when allowed to forage or just for variety in their diet.