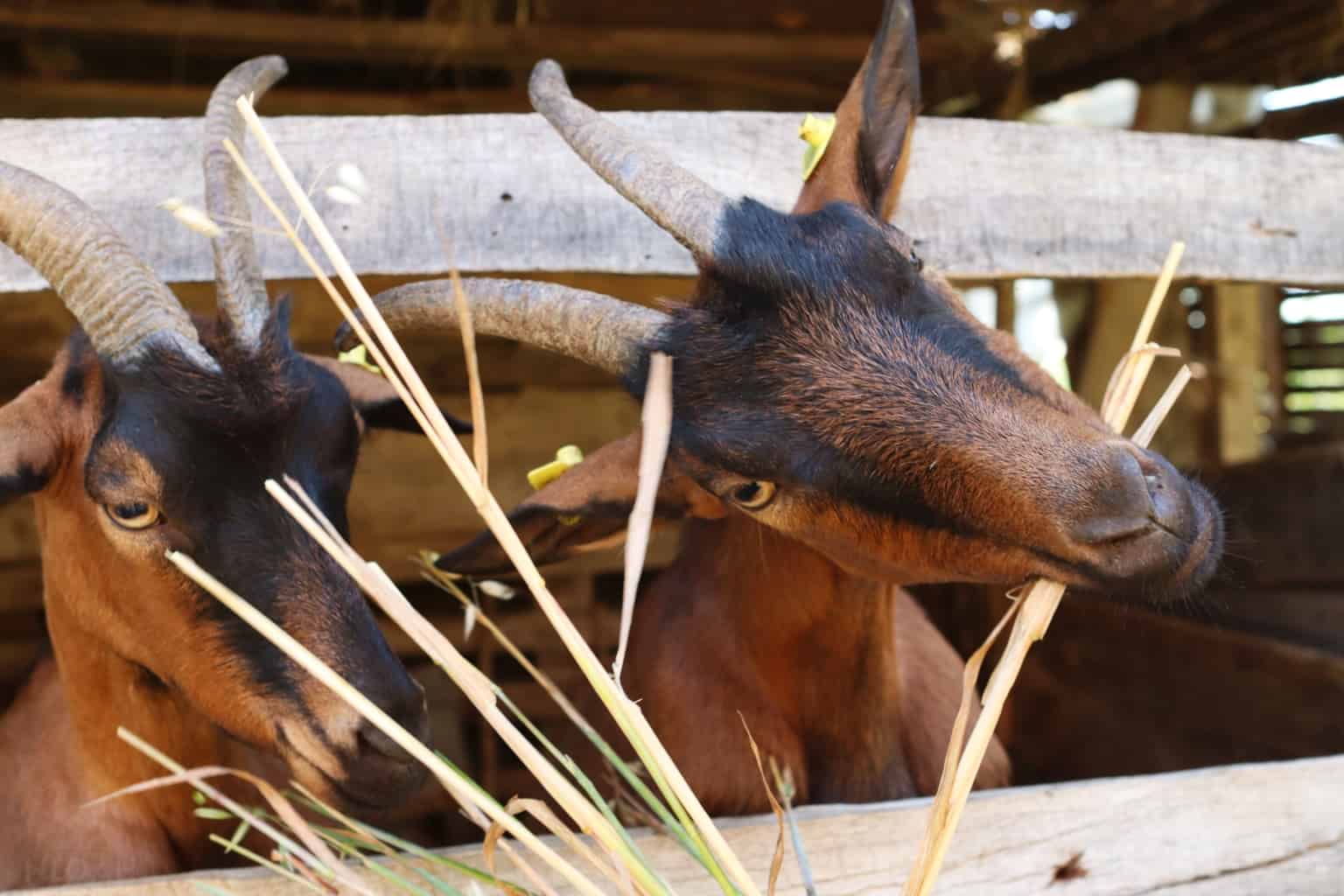 Goats eat all sorts of plant matter, but predominantly like to graze on grass, hey, silage and other greenery.

Although they’re pickier than most people think, there is no denying that goats are pretty adaptable when it comes to their diet.

Most things, so long as it is green they can probably eat it. But how about something like straw? It’s commonly used for animal betting on homesteads and farms, but can goats eat it?

Yes. Goats may safely eat a small amount of straw with no ill effects, but eating too much will lead to nutritional deficits, and potentially other complications. You don’t need to worry if your goat has a few mouthfuls of straw, but you should stop them from eating it routinely.

Most goat owners have already encountered this problem with their goats: you get straw for them to bed down on, but the goats turn around and eat it instead!

Straw is Not the Same as Hay

If you are a seasoned homesteader or farmer, I’m not telling you anything you don’t already know.

But, if you are new to raising livestock and keeping goats in particular you should know that straw is not the same thing as hay. Sure, some people use the words interchangeably, but that doesn’t make it so!

Straw is simply another part of harvested cereals, usually wheat, barley or oats. Hey is the woody, empty part of the stem or stock that remains after the fruiting part of the plant has been harvested.

As a rule, straw does not have any kernels or other edible, nutritious parts of the harvested plant left, although you’ll usually see one or two mixed in.

Since straw is just the leftover part of the plant, it isn’t nearly as valuable and it doesn’t offer hardly any nutrition compared to hay. That’s why it is so much cheaper and is typically used as bedding or floor covering.

However, straw is not inherently bad for herbivorous animals that eat grass, hay, and other plants.

Health Benefits of Straw for Goats

There is not much to recommend straw nutritionally. It contains fiber, a few carbohydrates and a few different vitamins and minerals, but all at greatly reduced levels compared to hay.

Goats can eat it and will derive a little bit of nutrition out of it along with some energy, but overall it is pretty bankrupt as far as their diet is concerned.

Goats that try to subsist on straw alone will quickly succumb to malnutrition and poor energy levels well before that.

Yes, goats can eat straw as it is, raw, with no ill effects assuming they don’t eat too much of it or eat it too often. You need not panic if you see your goats nibbling on a little straw.

Beware of Pesticides, Debris, and other Contaminants in Straw

One thing that goat owners must be aware of if they get straw for their goats, even if it is just as betting, is the presence of pesticides, trash, and other contaminants that are likely to be contained in the average bale.

Straw is cheap, and quality control is not very good because it is rarely used as feed. However, just because it isn’t intended to be food doesn’t mean your goats can’t and won’t eat it.

If they start munching away on a bale of straw they may encounter plastic bags, foil wrappers, old zip ties, pieces of wire, rocks, dirt, and more.

If they accidentally ingest any of these things it could cause serious problems, including blocking their digestive tract or even lacerating it.

For that reason, you want to carefully inspect any straw that you put down for them for any purpose, and if you know your goats are inveterate straw-snackers take extra care that you pick out the best and cleanest straw for them.

How Often Can Goats Have Straw?

Goats should not be fed straw on a regular basis. As mentioned above, it does not contain anywhere near the nutrition they need to sustain themselves, much less thrive.

That being said, if you have a straw around your farm or homestead, and especially if you have it down for your goats to bed on, there’s not much you can do to stop them from nibbling on it if they want to.

This is generally not a problem. A few bites here and there will not hurt your goats. There is nothing inherently bad about straw. But, problems will arise if they are allowed to eat too much of it or eat it too often.

Even though straw is not in and of itself harmful, goats that fill up on it won’t eat other, nutritious foods that they need.

That means that, in time, their health will start to degrade a little bit. You should not deliberately feed your goats straw, and do what you can to stop them from eating straw that they have access to.

How Can You Stop Goats from Eating Straw?

Goats, generally, are individuals but they are herd animals, and they do pick up habits from each other, even bad ones.

Much of the time you’ll see goats eating straw, particularly their bedding if they don’t have any other food to eat or if they get hungry. They might even nibble on it if they are bored.

The solution, then, is to make sure they have plenty of other better, tastier food than straw, and also make sure they get enough exercise and engagement out in the world.

So long as you keep them entertained and keep their dietary needs met, you shouldn’t have to worry too much about them chowing down on straw.

Can Baby Goats Have Straw, Too?

Baby goats should not eat straw. Once they grow up enough to regularly eat solid food they can have a few bites of straw without any ill effects, just like adults, but you don’t want to make a point of giving it to them.

Kids have stringent nutritional requirements when they are growing, and because their systems are developing and they’re growing so fast they will need plenty of good nutrition regularly, the nutrition they just will not get from straw!