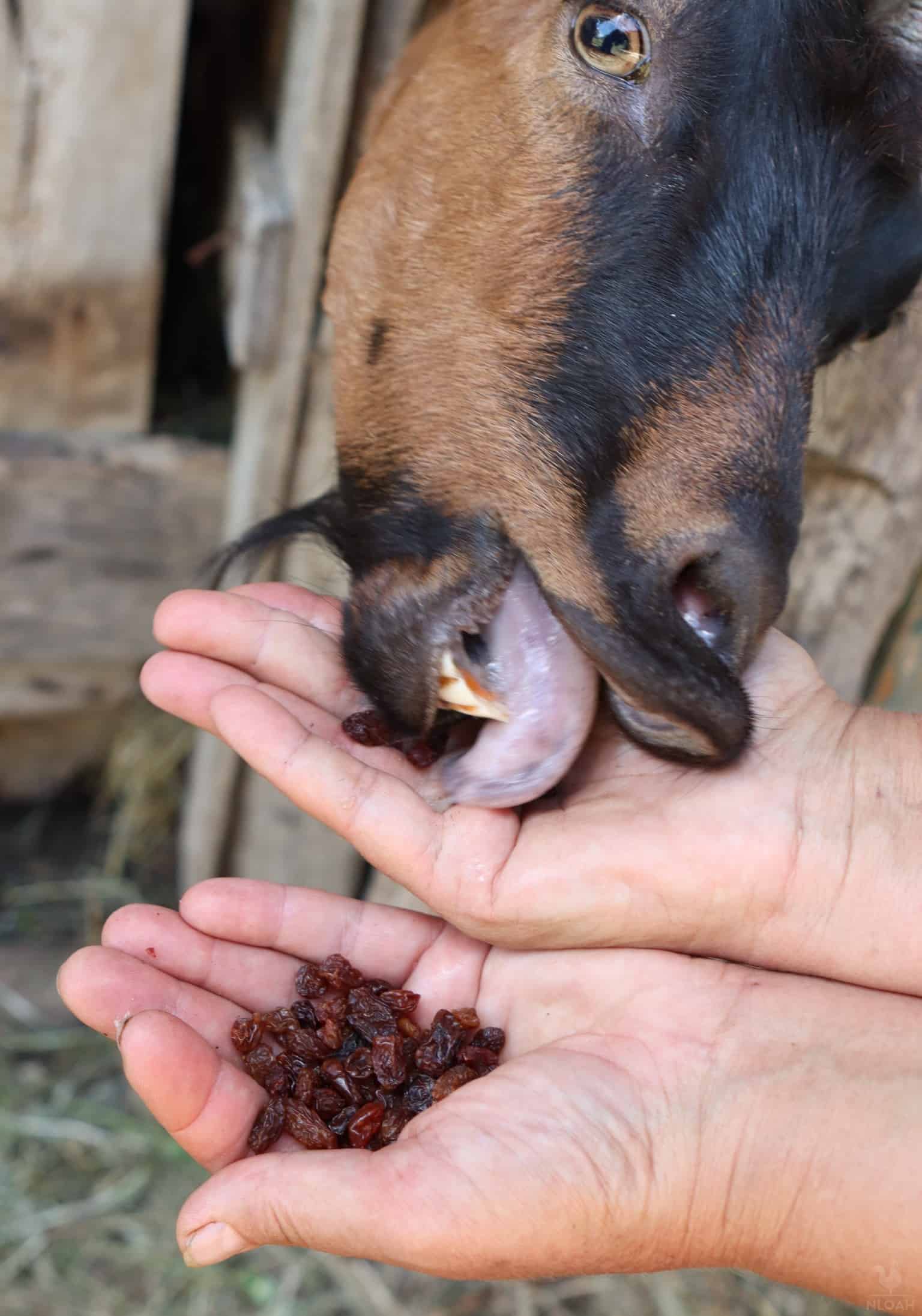 Goat owners know that when it comes to giving your goats treats, they often show a decided preference for sweet stuff, particularly fruit.

And who doesn’t love a juicy, ripe piece of fruit? But how about dried fruit? Raisins are about the most popular dried fruit there is, tasty, long-lasting, and convenient.

But can our goats eat raisins too?

Yes, goats can safely eat raisins, although you should only feed them sparingly. Raisins are high in calories and contain a considerable amount of sugar, but are also generally nutritious with a good selection of vitamins and minerals. This makes them an acceptable if rare treat for goats.

Good to know. Raisins are delicious, and goats generally love them, but it is really easy for them to overeat them.

This can lead to your goats putting on a few pounds or even getting an upset stomach, so you want to carefully measure out the grapes you’re going to give them, and then cut them off.

Keep reading to learn everything you need to know about feeding raisins to your goats.

Health Benefits of Raisins for Goats

Goats will find raisins to be a tasty treat, but they aren’t junk food. Raisins, like the grapes they used to be, contain a good selection of vitamins and minerals that are good for the overall health of goats.

These B vitamins work together to help cells function normally and also regulate such bodily processes.

Raisins also contain a little bit of choline, vitamin C, vitamin E and vitamin K, the latter of which is vital for the uptake and use of calcium.

Since we are talking about minerals, raisins do indeed contain a fair bit of calcium, lots of copper and iron, magnesium, phosphorus, potassium, and a little bit of selenium, and zinc.

But, being dehydrated, raisins contain very little water and in conjunction with their sugar content can dehydrate goats a little bit although this is rarely an issue so long as they have easy access to fresh water for drinking. All in all, raisins are a healthy treat and one that can give goats a boost of energy.

Yes, goats can eat raw raisins with absolutely no problems.

They sure can. Golden raisins are just another type of raisin, created from yellow or golden grapes.

Yes. Although currants have a fancy name, they are just black or dark purple grapes that have been turned into raisins.

Goats can eat raisins that have been cooked, but owners should know this will further deplete their nutritional profile which has already been reduced slightly during the dehydration process.

Since we are on the subject of cooking raisins, it is important that all keepers understand that they should never feed raisins to goats that have been prepared with or used as an ingredient in something that their goats cannot eat.

Raisins are routinely incorporated as an ingredient in various desserts, everything from bread pudding to cakes and other such delicacies.

The massive sugar content of these dishes along with other ingredients like butter, oil, extra salt, and so forth are all bad for goats and likely to lead to significant weight gain at best.

On the other hand, the outcome could be much worse. Serious indigestion, diarrhea, or even inflammation of the intestines or something as exotic as a bloom of sugar-loving bacteria in the digestive tract could result.

These conditions may possibly be fatal, and I know you don’t want to put your goats through that.

If you’re going to cook raisins, they should only be lightly cooked plain before being served to goats.

How Often Can Goats Have Raisins?

Raisins are wholesome, for sure, being only dried grapes but that doesn’t mean that goats can have them whenever they want or have as much as they like.

Raisins are very sugary and calorie dense, compared to the same weight of grapes, and that means they can upset the stomachs of goats if they’re allowed to overeat.

You should give your goats raisins only rarely as a deliberate treat, something they will love, but not as something that should be a regular component of their diet. A small serving once a week or every other week is more than enough.

Preparing Raisins for Your Herd

Goats will eat raisins anyway they can get them, and we’ll eat them off the ground, out of hand, out of a bowl or tray, or any other way.

They are small, tender, easy to chew, and easy to swallow, posing no challenge for goats whatsoever.

Can Baby Goats Have Raisins, Too?

Baby goats can have raisins also. However, you should be cautious about serving them.

Kids don’t need that much sugar in their diet, or at least that much extra sugar, so mind the quantity and only give them sparingly even compared to adults.

Also, you should only let kids try raisins if they are old enough to be eating solid food 100% of the time.

If they are still subsisting on milk, or they’re drinking milk and occasionally trying solid food, they aren’t old enough yet.

Keep in mind that kids have pretty serious nutritional requirements and their digestive tracts are usually sensitive, so hitting them with something as sweet as a raisin might upset them.

Try to Clean Up Any Leftover Raisins if You Can

It might be tough, considering how small they are, but you should make it a point to clean up any leftover raisins once your goats have had their fill.

Raisins are very sweet, and especially when they are left out in the sun they have a sweet aroma that other animals like mice, rats, and insects will be attracted to.

If you don’t want pests like that hanging around the area where your goats live, you should make it a point to sweep up those leftover raisins.