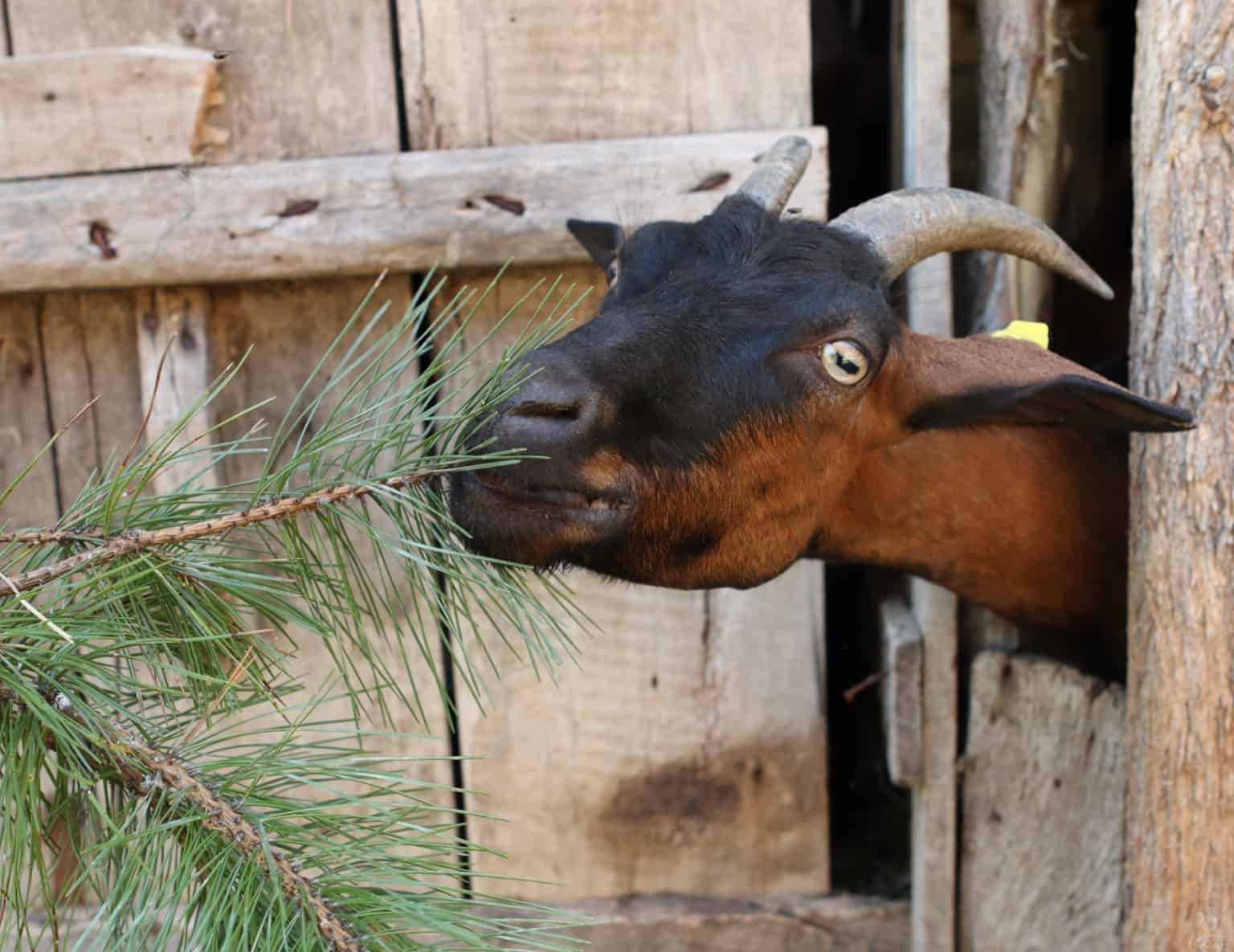 If we are being honest here, goats are pretty strange, at least when it comes to their eating habits.

It is a common occurrence to see them turn their nose up at fresh greenery only to eat bark right off of a tree or even whole twigs and sticks.

There’s nothing for it though, and goats generally know what they need when it comes to nutrition.

That’s why you’ll sometimes see them eating such strange items in the environment. Like pine needles, for instance. Can goats safely eat pine needles?

Yes, goats may safely eat pine needles in moderation. Pine needles provide a decent source of nutrition and vitamins for goats, and are thought to play an important role in reducing the presence of parasites in the intestines, and preventing constipation.

I don’t see how any animal would enjoy eating something like a pine needle, but what can you do.

All you need to know is that goats can safely eat pine needles and they can even make a nutritious part of a well-rounded diet. Naturally, there are some things you need to know first, so keep reading.

Comprehensive nutritional data about pine needles are scarce, but we do know they afford calories and some vitamins to goats, particularly vitamin C and some vitamin A. Both are important for a goat’s biology.

Additionally, studies seem to suggest that goats will instinctively eat pine needles when they can find them in an effort to keep their digestive tract clear of both blockages and parasites.

Pine needles have long been used as a treatment for various parasitic infections around the world so this definitely seems to make sense!

Caution: Excess Pine Needle Consumption May Cause Illness or Miscarriage in Goats

So, pine needles are generally healthy and safe for goats to eat, but there are some drawbacks you’ll need to be aware of. Pine needles might become toxic to goats if they are allowed to eat too many, too often.

Additionally, compounds present in pine needles, at high concentrations, might cause birth defects or even miscarriage in pregnant goats, so be extra cautious if you allow any expecting does to graze freely on pine needles around your property.

But, as with so many things, quantity is always key. If you don’t allow your goats to overindulge or make it a point to feed them pine needles on a regular basis, you shouldn’t have to worry about these problems.

Not all pine and pine-like trees produce needles that are safe for goats to eat! Particularly, yew trees and shrubs are incredibly toxic, every part, including the needles.

Goats that eat just a few yew needles may become gravely ill or even die. You must take all necessary precautions to keep your goats away from yew trees

Yes. Raw pine needles are safe for goats and this is likely how they will encounter and eat.

Yes, believe it or not. Although you need not go to the trouble of cooking pine needles, you can if you want to or even steep them in water to make a sort of tea.

Keep in mind that cooking pine needles will reduce their already meager nutritional content, however.

Beware of Pesticide and Herbicide on Wild or Unknown Pine Needles

Be very cautious of any wild or unknown pine needles and pine trees.

Neither is good for goats. If you have any doubt about the presence of these chemicals, don’t feed the needles to your goats or allow them to graze around the tree.

These substances have a way of building up slowly in tissues over time and often result in devastating health conditions, including cancer, endocrine system problems, reproductive harm, and more.

How Often Can Goats Have Pine Needles?

Pine needles are a once in a while supplemental food for goats. Given a chance, they will gorge on them if you allow them to, so you must keep an eye on them.

Ideally, you will allow your goats to have a serving of pine needles no more than twice a week.

This will allow them to serve as a healthy supplement to their diet while preventing entirely any concerns about toxicity.

Preparing Pine Needles for Your Herd

There’s not much to do if you want to prepare pine needles for giving to your goats. Wherever they find them on the ground or on a low-hanging branch, they will eat them.

If you are gathering them up yourself, you can scatter them in their enclosure, mix them in with other food or let them gobble them up out of a bowl or off of a tray.

Can Baby Goats Have Pine Needles, Too?

Yes, kids may have pine needles also but you’ll want to wait for them to grow up a bit before you allow them to munch on them.

Kids should be old enough where they are eating solid food entirely, and not rejecting it at all. Once this happens, you can let them eat pine needles along with the rest of the adults.

If your baby goats are young enough where they are still nursing or are trying solid food only periodically, they shouldn’t be eating pine needles.

Keep in mind, that maybe goats won’t be able to eat as many pine needles before suffering the effects of toxicity, so ration their portion accordingly.