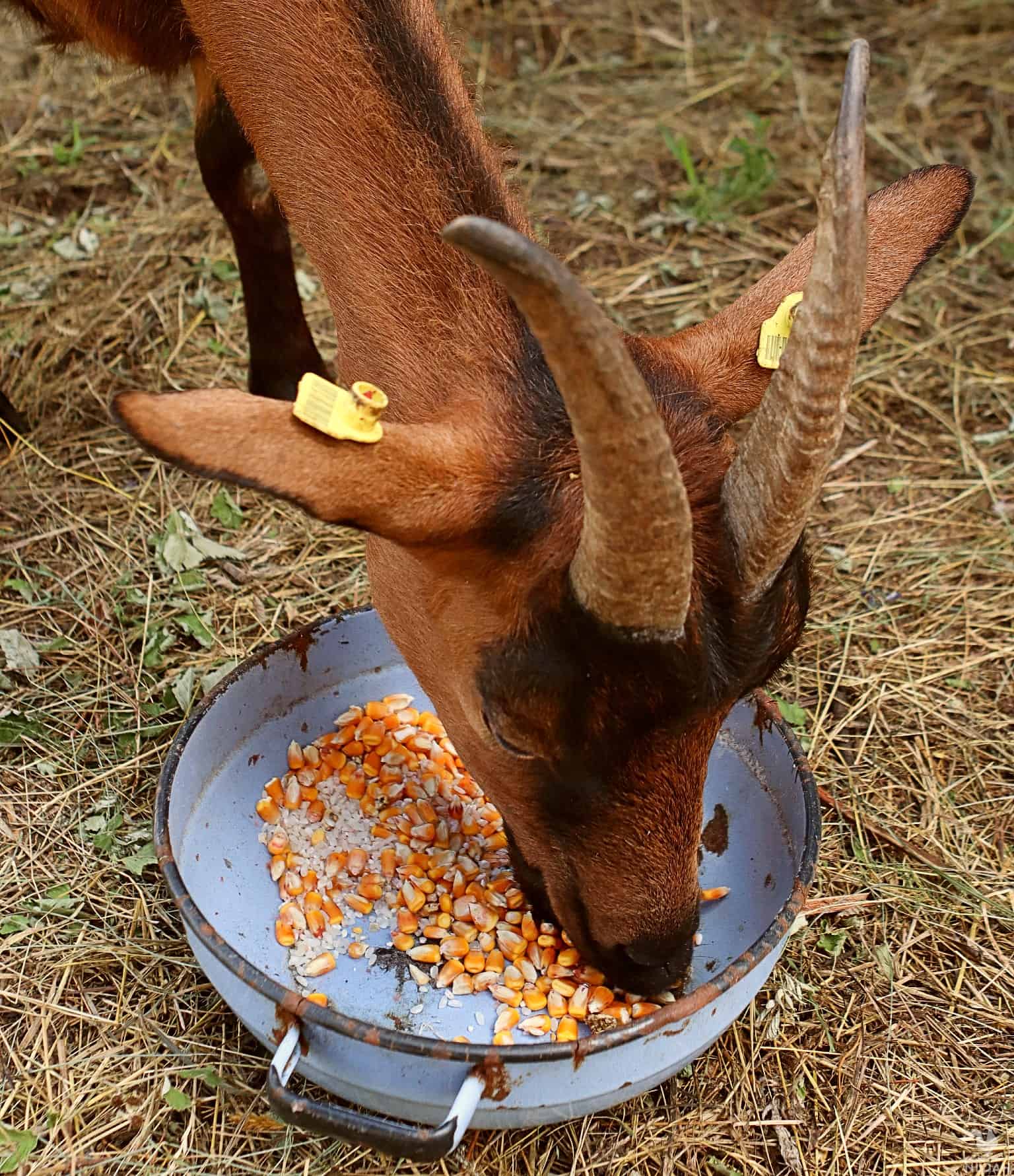 Most goat owners know by now that their goats should be eating a diet made up primarily of grass, hay, silage, and similar foraged plant matter.

However, a certain percentage of a goat’s diet should be comprised of supplementary foods. How about corn? Can goats eat corn?

Yes, but goats may only eat a limited amount of corn safely. Excess consumption of corn may cause harmful conditions in goats: calcium stones in the urinary tract and acidosis. However, when fed sparingly, corn can be a nutritious and fun treat for your goats.

The consequences of overfeeding corn to goats can be quite severe, but so long as you are diligent and use a little common sense you won’t have to worry about these negative outcomes.

Your goats will definitely enjoy the taste of corn, and it can offer them some decent nutrition in the bargain. Keep reading to learn what you need to know.

Health Benefits of Corn for Goats

Corn is made up of mostly starch and sugars. Goats do need starch in their diet, although they would be better off if they got it from another source. The sugars will give them a quick energy, however.

Of even more benefit are the vitamins and minerals that are present and most species of corn. Vitamins B1, B2, B3, B5, B6 and folate are all present in abundance, along with a good shot of vitamin C and a little bit of vitamin A to round things out.

Just as good as the mineral complement. Magnesium, phosphorus and manganese are all present in quantity, along with a little bit of potassium, zinc and iron.

This can make corn a healthy snack so long as you keep the quantity low and only feed it to them periodically. You don’t want to feed your goats corn every day, or even every other day.

Yes, your goats can eat corn raw and this is probably the best way overall to serve it to them. It is still easy enough for them to eat and the corn will maintain maximum nutritional value.

Can Goats Eat Corn on the Cob?

Yes, although I would prefer to serve it to them off the cob. Corn on the cob might be difficult for smaller goats to eat.

Keep in mind, that goats cannot open their mouths very wide, and they chew with their back teeth. Even then, they typically chew very little before swallowing their food.

This can make eating corn off the cob a challenging proposition for goats, although some of them might enjoy the activity.

Yes, your goats can eat cooked corn and this might make it even more appealing to them. As mentioned above, cooking corn will reduce the nutritional profile somewhat, particularly the vitamins but also some of the minerals.

Since we were talking about cooking, now is a good time to point out that your goats should have never eaten corn there’s been cooked with any harmful ingredients or other things they cannot, or should not, have.

Things like excess salt, sugar, butter, spices, and seasonings are all bad news for goats. At best, surplus calories along with your already highly caloric corn will lead to weight gain.

Weight gain can be bad enough, but other, worse outcomes might still occur including hypertension, salt poisoning, and an outbreak of harmful gut flora owing to too much sugar in their digestive tract.

If you’re going to cook corn for serving to your goats, keep it plain.

Beware of Pesticide on Grocery-bought Corn

Something else to keep in mind if you are purchasing corn from the grocery store with the intention of serving it to your goats: most commercial produce is heavily treated with pesticides.

Although we have assurances from various government agencies that these pesticides are safe for both people and animals, there’s a growing body of evidence that suggests the reality is anything but.

These pesticides have a way of slowly accumulating in tissues over time with repeated ingestion, and causing a host of issues.

Common pesticides have been linked with cancer, hormonal disruption, and all sorts of other problems. in any case, it is bad news, so if you’re buying corn from the grocery store for your goats, make it a point to buy organic come up pesticide-free varieties or else wash the corn as thoroughly as you can prior to serving it to your goats.

How Often Can Goats Have Corn?

Goats should have corn only on a highly limited basis. Generally, 75% of their total calorie intake should be coming from grass, hay, silage, and other similar foods. The remaining 25% give me supplementary foods to help round out their diet and give them a little bit of interest at meal time.

Corn should only be a small percentage of that lesser 25%. This place is pretty well squarely in the treat category, although technically it could be considered a supplementary food. I’m warning you now, don’t overdo it.

Feeding corn to your goats too often can lead to significant health issues, and may even prove fatal. Excess consumption of corn has been linked to acidosis.

Acidosis eventually leads to a slowing and then near cessation of digestion and subsequent dehydration. Severe instances can prove fatal.

Too much corn has also been linked to the formation of stones in the urinary tract, known as urinary calculi.

Particularly harmful in males, it can impede or even prevent urination which can, as you might have guessed, also prove fatal.

Accordingly, you do not want to feed very much corn to your goats at all, and you definitely don’t want to feed it to them often. A small serving of corn once a week is about as much as you should offer them.

Preparing Corn for Your Herd

Preparing corn for your herd is generally a simple task. I would recommend you shuck the corn if you are leaving it on the cob and then leave your goats to nibble away at it as they would.

Alternately, you can slice the kernels off of the cob and then feed it to them in bowls or on trays.

Can Baby Goats Have Corn, Too?

Baby and adolescent goats can technically have corn, but I would recommend against it. Even when they are old enough to start eating nothing but solid food, their nutritional requirements and sensitive digestive systems are not going to handle corn too well.

Kids are also more vulnerable to the negative conditions that might be brought on my corn, detailed above, and you definitely don’t want to risk that when they’re at a vulnerable stage of life.

If you are going to feed corn to kids, wait until they are grown up enough where they are regularly and reliably eating nothing but solid food. They should be well into adolescence by this time.

Clean Up After Serving Corn to Your Goats

Keepers are also advised to make it a point to clean up after their goats once they are done with the corn.

Corn has a tendency to decay and rot quickly when left out in the heat after being nibbled on, and if your goats come back around later to have a little extra, it could make them sick.

Worse, the sugars in corn will easily attract pests, rodents, and other mammals along with insects.

You don’t want any of them hanging out where your goats do, and insects in particular have the potential to cause misery for your goats.

Once your goats are done with the corn clean up any scraps and dispose of them properly.

"Hi! I'm Kendra. I'm a wife, mother, and homesteader. I love everything that has to do with simple living. I'm a canning instructor, an avid gardener, and a constant learner of old-fashioned skills. Here is where I share it all. Welcome to the adventure!"
So, Can Goats Eat Alfalfa?
Worming Goats: Everything You Need to Know
So, Can Goats Eat Sunflower Seeds?
Goats Fruits List: What Fruits Can Goats Eat?
Why Is My Goat Drying Up. Mystery Solved!