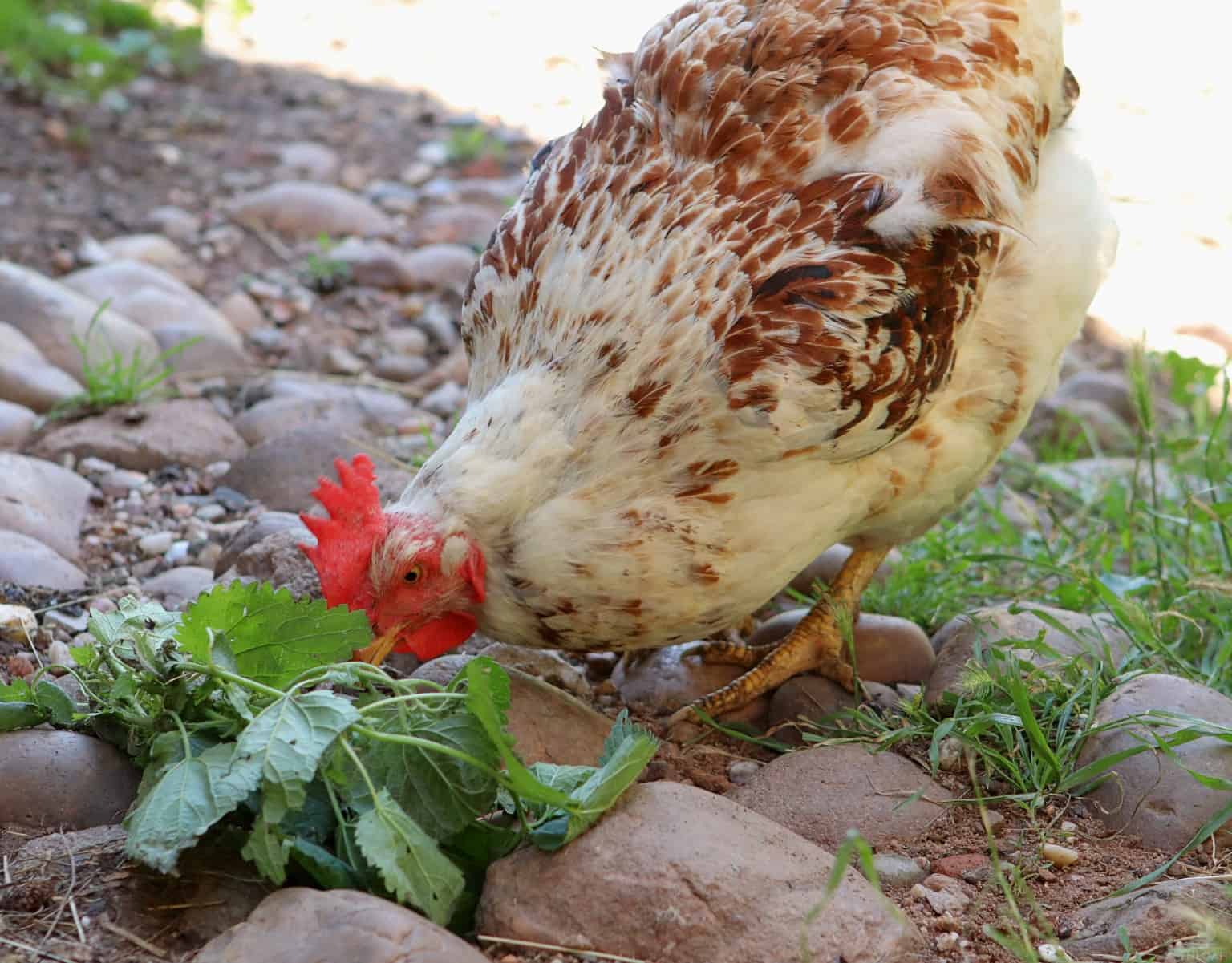 Chickens can eat all kinds of things out in nature that would otherwise give humans problems.

They don’t bulk at the hottest chili peppers, they seem like they could care less about thorns and we’ll even happily gobble down several irritating plants. How about nettles? Can chickens eat nettles?

Yes, chickens can eat all kinds of nettles, including stinging nettles. All parts of the plant are safe for chickens to eat and contain abundant vitamin K, vitamin A, B complex vitamins, iron, manganese, magnesium, copper, and calcium.

Most species of nettle are the stinging type and can pack quite a wallop if handled foolishly, but your chickens won’t be the least bit bothered by them and might even eat them raw.

Regardless of whether they are raw or cooked, nettles are an excellent addition to your flock’s diet. Keep reading to learn everything you need to know.

Nettles wind up roundly hated by many people after unfortunate running with them, but as it turns out they are a highly nutritious plant that can be enjoyed by people and animals alike.

Aside from good taste, they also pack in excellent nutrition in the form of vitamins and minerals.

Nettles are rich and B complex vitamins including niacin and folates, vitamin A and a tremendous amount of vitamin K.

They are also abundant with vital minerals, including calcium, copper, iron, magnesium, manganese, phosphorus, and a little bit of zinc.

Also important are the presents of electrolytes, namely potassium but also just a little bit of sodium. Trace amounts of beta-carotene and lutein are also present.

Health Benefits of Nettles for Chickens

Nettles can do an awful lot to boost the health of your chickens. All of the B complex vitamins work together to improve energy production and cellular health, well vitamin k improves skin quality, healing and blood clotting.

All of the minerals are similarly vital for healthy chickens, with the iron being used to produce new red blood cells and to oxygenate blood in the body while the calcium in nettles is needed to build strong bones and also to produce healthy, thick egg shells in laying hens.

Lastly, where is micronutrients and other unique compounds present in nettles, including stinging nettles, have been shown to dramatically improve reproductive health and egg viability.

Hard to believe that so much good nutrition is behind that painful sting!

Yes, chickens may eat nettles raw, including stinging nettles, though they might not prefer them unless you cut them down and allow them to dry out.

Raw is the preferred way to serve them since they will derive the maximum nutrition from the plant.

As mentioned, yes, chickens may safely eat stinging nettles and don’t seem the least little bit affected by those incredibly fine but frighteningly potent hairs that cover the plant. Raw or cooked, it makes no difference.

Yes, chickens may eat nettles cooked, and although they will suffer somewhat in the nutritional department if you cook them there are several ways to prepare nettles that will make them even more appealing and convenient for your birds to eat.

However, if you are the one gathering and harvesting the nettles you’ll need to be careful that you don’t run afoul of their notorious sting. We will talk more about that down below briefly.

Since we are on the subject of cooking and other kitchen preparation of nettles, it must be pointed out that you should never serve nettles to your chickens that have been prepared with any other harmful ingredients they cannot have.

Things like salt, sugar, butter, oils, and so forth are just not good for chickens, and can cause poor health or serious complications.

At best, any of those ingredients could give your beloved birds a seriously upset stomach and cause diarrhea, but at worst they could be facing something like salt poisoning, high blood pressure, fatty liver syndrome, and more.

There are lots of ways to prepare nettles that make them delicious and healthy for human consumption, but that doesn’t mean they are suitable for giving to your chickens.

Beware of Pesticides or other Chemicals on Wild Nettles

One thing to keep in mind if harvesting wild nettles for serving to your chickens or if you are allowing them to free-range on them is that they might be contaminated with pesticides, herbicides, or other chemicals. None of them are good for your birds.

If you have any doubts about what a given plant might have been treated with or exposed to, think twice before giving it to your chickens.

How Often Can Chickens Have Nettles?

Nettles, as described above, is shockingly good for chickens but that doesn’t mean they can eat them all the time, or that they should.

Nettles should only be given to your chickens once or twice a week as part of a well-rounded balanced diet.

generally, anywhere from 80% to 90% of a chicken’s calories should be coming from its chicken feed, with the remaining 20% to 10% being made up of wholesome, nutritious supplemental foods and snacks, of which nettles can be a part.

Preparing Nettles for Your Flock

There are a couple of ways to prepare nettles for serving to your flock, but just as importantly, you must prepare yourself to gather the nettles!

Stinging nettles tell you everything you need to know about the name.

These weed-eat plants are covered in incredibly fine, translucent needle-like hairs that can pierce your skin before releasing a potent cocktail of histamines and other chemicals that will burn ferociously and cause you to break out in a rash.

This might be too steep a price to pay for some chicken keepers!

You have a couple of options for harvesting nettles. The first one is simply to wear thick gloves before carefully cutting the nettles down and depositing them in a sturdy bag.

The second option is to snip them off at the base and let them fall in place to dry out before collecting them later. Once the plants dry out, the stinging chemicals deactivate.

Another option, and the one your great-grandparents likely relied upon, is to simply grab the nettle with authority, headless of the stingers.

It sounds crazy, but the hairs are so delicate that when the plant is roughly handled they usually get broken off or laid flat harmlessly. It is only when you gently grasp it or brush up against it that they are able to inject you.

Now, with that out of the way, once you have collected the nettles you can either chop them up raw and give them to your birds or you can roast them, boil them, mash them up into a porridge or blend them into other food as a sort of nutritional supplement.

Your birds should like it any which way and you can also take comfort knowing that once nettles are cooked the harmful compounds and the toxin are similarly deactivated and can’t hurt you anymore.

Can Baby Chicks Have Nettles, Too?

Yes, baby chicks may have nettles and will generally eat them if they are chopped up or mashed after being cooked.

However, you should wait until they are at least 6 weeks old and preferably a little older before serving them nettles for the first time.

Chicks, like adults, should be subsisting primarily on chicken feed and a starter feed particularly.

"Hi! I'm Kendra. I'm a wife, mother, and homesteader. I love everything that has to do with simple living. I'm a canning instructor, an avid gardener, and a constant learner of old-fashioned skills. Here is where I share it all. Welcome to the adventure!"
Do I Need An Incubator? Pros and Cons Revealed
22 DIY Chicken Dust Bath Container Ideas for Your Girls
Silkie Chickens: Everything You Need to Know
So, Can Chickens Eat Pineapple?
So, Can Chickens Eat Napier Grass?