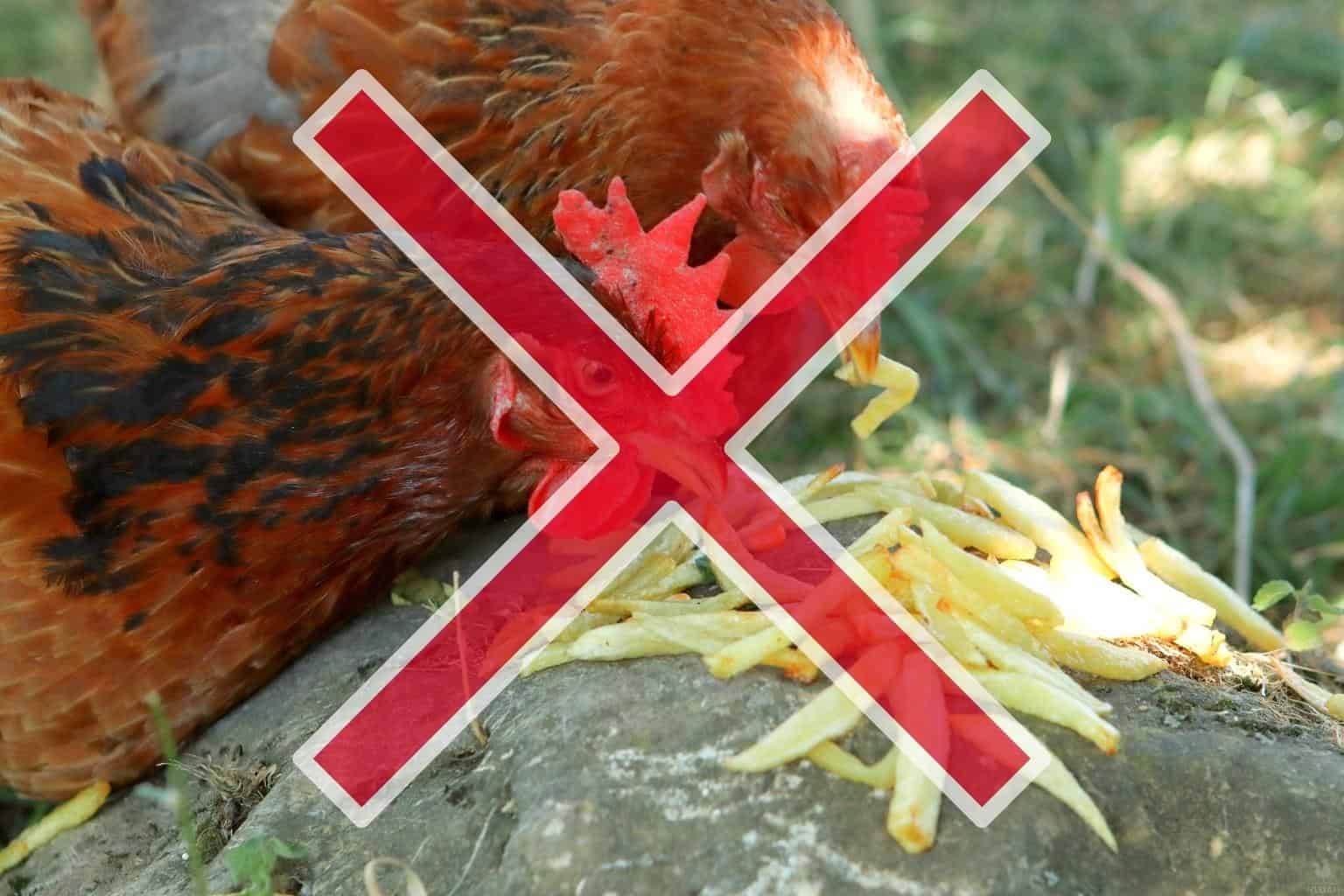 If we’re being honest, I think every pet owner feels the temptation to feed their beloved companion some of whatever they have to eat. We know we probably shouldn’t. We know it is almost certainly bad for our animal friends.

But just look at their eyes! Look how eager they are to sample whatever you’re having. It’s hard to resist, that’s for sure, and chickens are no different in this regard. They can eat all sorts of foods, but not just anything.

Let’s say you are having your favorite fast food burger and a side of fries: can your chickens have some of your french fries?

Yes, chickens may consume french fries, but they definitely shouldn’t. French fries contain everything that chickens don’t need, including excess calories, an abundance of oils, and way too much salt. Any of these alone can cause significant health problems, but altogether they are a recipe for dietary disaster. Don’t give your chickens french fries.

But, if you own chickens and the temptation to treat them with some of your fried starch sticks is just too strong, keep reading to get the full story.

To be completely upfront, chickens may in fact eat french fries and there is nothing that the typical french fry is made with that is overtly poisonous to the chickens.

Assuming there is no preservative or chemical trickery present, french fries are typically just made of julienne potatoes, fried and oil, and then abundantly salted.

The problem is that even a tiny serving of french fries contains way, way too much of all three.

But They Really Shouldn’t

Consumed in any quantity or in any regularity, french fries will cause major health problems for your chickens, several of which can be fatal.

As mentioned above, too many calories, too much oil, or too much salt can prove problematic enough by itself, but when you combine all three you exemplify what junk food really is and french fries serve as nothing less than an assault on your chicken’s systems.

French fries are extremely calorie dense. Chickens have a propensity for gaining weight quickly when they have too much to eat, and a chicken that fills up on french fries even a couple of times a week is going to start packing on the pounds.

This obesity can lead to other problems all on its own, and in conjunction with the other problems caused by the high-fat content of french fries, your birds could soon be facing a health crisis.

Particularly in the case of excess fat, this could lead to a problem known as fatty liver hemorrhagic syndrome.

I’ll spare you the details, but suffice it to say that your bird could bleed to death internally from a ruptured liver.

It is a lengthy, excruciating, and ugly way to go, and it will be a hell of a sad way for your bird to go just because you couldn’t restrain yourself from feeding them your leftover french fries.

French Fries are Full of Oil

French fries, as the name entails, are fried and oil of one kind or another. No matter what kind of oil it is, your chickens definitely shouldn’t have it as they have a very hard time digesting it.

You might think it is a minute amount in the grand scheme of things, but even a little bit of oil can cause gastrointestinal distress for your flock.

Diarrhea, irritation of the intestines, crop and gizzard problems, the works. Suffice it to say that chickens don’t get any oil in the wild as part of their ancestral diet, and they definitely don’t get starchy treats deep-fried in the stuff.

Anything more than a bite or two for an adult chicken is setting the stage for a messy, messy coop at best.

Consider also that diarrhea can lead to rapid dehydration or electrolyte shock and you could be setting the stage for dead birds.

Lastly, but certainly not least, french fries are usually loaded with salt as seasoning.

Your chickens can tolerate only a little bit of sodium in their diet, and nothing even close to the salty excess that the average American consumes every single day at every meal.

Salt will raise the blood pressure of your chickens, just like it doesn’t people, and it will also put a major strain on their kidneys.

Way too much salt in a short period of time can lead to kidney damage and other serious complications.

Just one more reason why you should never, ever give your birds french fries if you love them.

If You Must Give Your Birds Some of Your Fries, How Often Can You Do So?

Let’s just say that despite all the warnings above and despite my appeals to your reason and better nature, you are intent on letting your chickens sample french fries before they leave this mortal coil.

How often can you give your chickens french fries with the expectation that they will experience no ill effects?

At best, french fries should be regulated to a tiny portion very rarely, like maybe once a month if that.

An adult chicken taking a few bites of french fry is not likely to experience any negative effects at all unless they have a particularly sensitive digestive tract.

Most chicken experts recommend a diet of 90% chicken feed with 10% supplementary foods being made up of fresh produce, meat, and other nutritious items.

Giving your chickens the occasional bite of french fries should only comprise a tiny fraction of that 10%.

Don’t Give Fries to Baby Chicks

Incredibly, I see people asking here and there on the internet whether or not they can give chicks french fries.

This type of irresponsibility is truly baffling, but regardless of my own opinions, you should not give french fries to baby chicks at all.

Compared to adults, chicks have even stricter nutritional requirements and digestive systems that are even more sensitive.

Chicks are also disproportionately more vulnerable to problems with their crop and gizzard, problems that are easy to incite when feeding them the deep-fried dietary disaster that is a french fry.

Don’t give your checks any french fries, period. Wait until they are adults at least.

Now, if you definitely want to give your chickens some tasty potato goodness and you aren’t going to take no for an answer, there is hope.

All you need to do, happily, is make them oven fries instead. No salt, no oil. Just slice up potatoes, set them on a baking sheet, and then toss them in a 450° oven for about 25 minutes.

They will have that soft, flaky texture of a golden french fry but your chickens will be able to enjoy a wholesome potato unadulterated by all that oil and salt. No trouble, no health problems and happy birds.