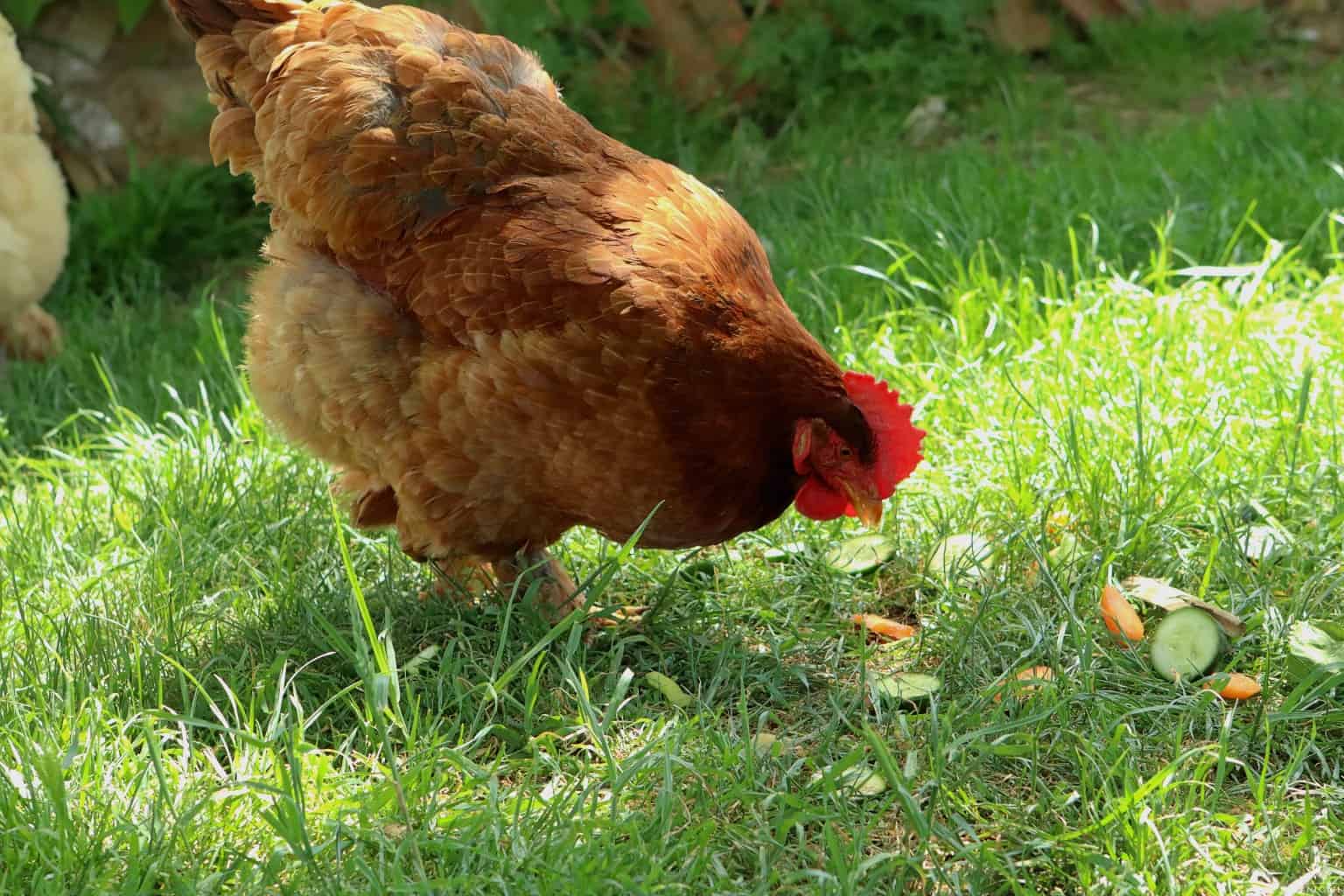 Chickens are known for eating just about anything they can reach or catch. Bugs, seeds, nuts, fruits, veggies- nothing is off the table. In fact, chickens can eat many things that come off of your table.

Giving your chickens some spare produce from your kitchen is a great way to add variety to their diet and give them an enjoyable treat. How about cucumbers? Can chickens eat cucumbers?

Yes, chickens can eat cucumbers. Cucumbers have a well-rounded complement of vitamins and minerals, including vitamin C, vitamin K, manganese, and magnesium, and they’re a great source of hydration since they’re 95% water.

What you might not know is that chickens love cucumbers. Your flock will enjoy the refreshing, clean taste and crunch of a crisp cucumber on a hot day.

But there is a little more to know before you toss a bunch of cucumbers out into the run. Keep reading to learn more.

Cucumbers are a low-calorie snack for chickens that are packed with nutrients. They are a good source of vitamins C and K, as well as manganese and magnesium. Cucumber seeds also contain a type of polyphenol called cucurbitacin.

Cucumbers are mostly water. In fact, they are 96% water. This makes them a great summer treat for chickens since they help to keep your flock hydrated.

Vitamin C is an antioxidant that helps to protect cells from damage, while vitamin K is necessary for blood clotting and bone health.

Manganese helps with metabolism and magnesium is important for nerve and muscle function.

The cucurbitacin in cucumber seeds has been shown to have anti-inflammatory and anticancer effects in laboratory studies.

While more research needs to be done, there is potential that cucumbers could have these same effects in chickens.

No matter how you slice it (ha!) cucumbers are a juicy and nutritious supplement for your chickens’ usual diet.

Yes, and this is the best way to serve them. Cucumbers are almost entirely water, and cooking them tends to turn them into useless mush.

If you have extra cucumbers from your garden or the grocery store, give them a rinse or peel and let your flock enjoy.

Technically, yes. But it’s not recommended. Cucumbers are mostly water and they don’t have a lot of flavors to begin with. When you cook them, they become an unappetizing, slimy mess.

Plus, many of the nutrients found in cucumbers are adversely affected when cooked. When you cook cucumbers, you lose a lot of the vitamins, minerals, and antioxidants that make them good for chickens.

Definitely. The seeds of cucumbers are actually a good source of essential nutrients like vitamins, minerals, and antioxidants and the primary source of cucurbitacin, mentioned above.

It is cucurbitacin which has been shown to have significant anti-inflammatory and anticancer effects in laboratory studies, so your birds should definitely eat those seeds!

Yes, chickens can eat the skins safely. However, the skin of cucumbers can be tough, and some birds might not like it at any rate. Peeling cucumbers is generally a good idea when feeding them to chickens.

Yes, chickens can safely eat the leaves from a cucumber. The leaves are also nutritious, though they do not contain as many nutrients as the flesh or seeds of the cucumber.

Beware of Pesticides with Store-bought Cucumbers

More importantly, the skins of cucumbers are often heavily treated with pesticides. These chemicals can be toxic to chickens and potentially cause health problems. If you grow cucumbers yourself, great! You shouldn’t have to worry about it.

But if you purchase cucumbers from the store, it is best to wash them thoroughly before feeding them to your flock to remove any potential residue.

You might want to peel cucumbers before serving them to your birds as standard procedure; the peels retain the most pesticide of any part of the plant.

No! Chickens should not eat pickles. Pickles are cucumbers that have been soaked in a vinegar or brine solution.

Even if all-natural, the high acidity of the vinegar can cause major digestive or crop problems for chickens.

In addition, pickles contain tremendous amounts of salt and other spices or flavorings that could upset your chicken’s stomach, at best, or result in severe kidney damage or electrolyte shock.

Never, ever feed pickles to your chickens. Just don’t do it.

How Often Can Chickens Have Cucumbers?

Cucumbers are a healthy treat for your chickens, but like anything else, they should be given in moderation. A couple of servings a week is the most your flock should get.

Generally, safe produce should only make up about 10%-20% of a chicken’s total calorie intake to ensure they get plenty of nutrition and avoid problems associated with overindulgence.

Remember, chickens should subsist primarily on dry, hard food! Too much moist food can cause indigestion and loose stools.

Preparing Cucumbers to Give to Your Chickens

The best way to give cucumbers to your chickens is peeled and whole. If you want to leave the skins on just give them a quick scrub to remove dirt and/or pesticide residue and then let your flock enjoy. They’ll peck at them and eat them up in no time.

Alternately, you can split cucumbers in half lengthwise to make more serving opportunities, or cube cucumber pieces and place them in several bowls to make sure every chicken gets a chance to eat some.

Some keepers ever mash cucumbers into a paste to make it even easier to eat for smaller birds.

Don’t Feed Decaying or Moldy Cucumbers to your Chickens

Chickens are such eager, indiscriminate feeders, that it is sometimes tempting to just toss them anything that you need to be removed from your kitchen. Stuff like old produce for instance.

Resist this temptation: it is not safe to give chickens decaying or moldy cucumbers (or any other food for that matter). Doing so can make your flock very sick.

Can Baby Chicks Have Cucumbers?

Yes, but only a few and only tiny pieces. Too much cucumber can cause diarrhea in chicks, so only give them a very small amount at a time and very sparingly.

Chicks should eat pretty much nothing but starter feed their first several weeks of life, so it is best to wait until they are at least 6 weeks old before introducing cucumbers to them.

"Hi! I'm Kendra. I'm a wife, mother, and homesteader. I love everything that has to do with simple living. I'm a canning instructor, an avid gardener, and a constant learner of old-fashioned skills. Here is where I share it all. Welcome to the adventure!"
So, Can Chickens Eat Gourds?
Does It Matter If Chickens Inbreed?
How Far and How High Can Chickens Fly?
So, Can Chickens Eat Popcorn?
Raising Chickens: The ULTIMATE Guide