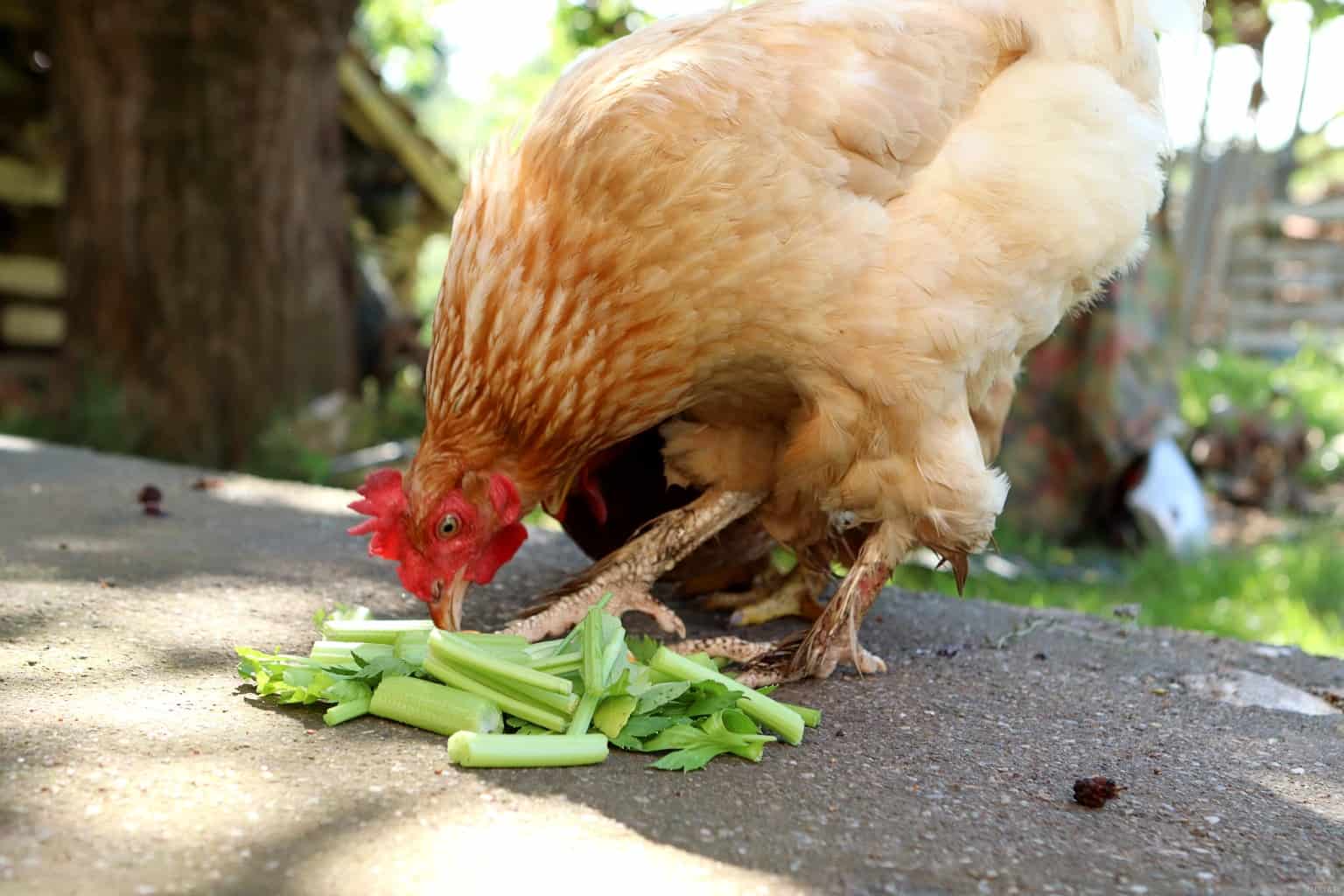 Let’s be honest. There are some veggies you buy with the best of intentions, but never eat. They just sit in your fridge and wither until you throw them out. We all have one.

For me, and most of us, I’d say, that veggie is celery. But if you own chickens, why couldn’t you give it to them instead of throwing it out? Chickens eat all sorts of veggies, but can they eat celery?

In short, yes, chickens can eat celery and celery roots. Celery is a great source of dietary fiber, as well as vitamins A, C, and K as well as riboflavin. It is also 95% water by weight, which can help keep your chickens hydrated and healthy. However, celery is very stringy and will need to be cut into small pieces for feeding so chickens don’t choke.

Celery and its relatives are some of the least exciting vegetables around, but that doesn’t mean you cannot pawn them off on- I mean, treat them to your beloved chickens!

Jokes aside, we’ll tell you everything you need to know about serving celery and celery roots to your flock in the rest of this article.

Celery is an excellent source of vitamins and minerals, as well as dietary fiber. Celery is rich in vitamins A, C, K, and riboflavin.

It contains modest amounts of potassium, calcium, magnesium, and sodium and is a good source of dietary fiber, which can help with digestion in moderate quantities.

Celery also contains small amounts of phytochemicals that have been shown to have anti-inflammatory and antioxidant properties.

Benefits Chickens Get From Celery

Chickens can benefit from periodic intake of celery in several ways. The high water content helps keep them hydrated on warm days, while the high fiber aids in digestion and the bulking of stools.

It might be boring, but celery is a healthy veggie nonetheless and can be a good supplement to a well-rounded diet for your birds.

It is funny how much our chickens can seem like people, sometimes. Just like some people get totally depressed by the thought of eating celery, quite a few chickens do, too.

There is a fair chance some of your flock will flat-out refuse to eat it. If that is the case, there is no need to force them.

Chickens can eat celery raw, but they might prefer it if it is cooked or steamed first. The cooking process breaks down the cellulose fibers in celery, making it easier for chickens to digest and absorb the nutrients.

Chickens can eat celery cooked, steamed, or raw. Cooking celery does make it easier to digest and absorb the nutrients for chickens, but it also significantly impacts the nutrients in the celery, making it a tradeoff.

Yes, chickens can eat celery roots, also called celeriac. Celeriac has much the same nutritional benefits as celery, but it does not contain quite as much water.

It is also quite tough, being a root, and will allow your chickens to peck away at it for some time without worrying over the stringiness of celery proper.

If you are going to cook celery for your chickens or feed them leftovers from your own meals, make sure it was not prepared with harmful ingredients like oils, salt, or spices that can be toxic to chickens.

These ingredients can negate the health benefits of celery at best and potentially make your chickens sick.

How Often Can Chickens Have Celery?

Celery is not a necessary part of a chicken’s diet, but it can be a healthy treat or supplement if they like it. Chickens can have celery once or twice a week, in small quantities.

Experts on chicken nutrition generally recommend not feeding chickens produce as more than 10%-20% of their total calorie intake to ensure they get a well-balanced, nutrient-rich diet.

Celery Is Stringy and Hard for Chickens to Eat

Celery is one of the stringiest vegetables, which can make it hard for chickens to eat. These strings can get caught in their throats and cause them to choke, or in a worst-case scenario cause crop impaction, particularly likely if they aren’t eating enough grit.

Remember, chickens don’t have teeth and don’t chew with their mouths, meaning that they won’t be breaking down those fibers before swallowing.

For this reason, you should always cut celery into small pieces before feeding. See the next section.

Preparing Celery for Your Chickens

Because it is so stringy, it’s important to cut celery into small pieces before feeding it to your flock to avoid any choking hazards and to make it more appealing to them. Many birds seem put off by whole stalks of the stuff.

The best way to get your chickens to eat celery is to chop it into small pieces and mix it in with other supplemental foods they do like, such as scratch grain, mealworms, or other produce.

When serving celery roots, you can split or quarter it roughly before hanging it up for your birds to peck at, or chop it up into smaller pieces before placing it in a bowl or on a tray.

Don’t Give Moldy Celery to Your Birds

While chickens can eat celery, you should avoid giving them any old, moldy produce of any kind.

When fruits and vegetables start to rot, they develop harmful mold spores that can make your flock sick if they eat them.

Inspect your celery carefully before feeding it to your chickens to ensure there is no visible mold, and wash it thoroughly to remove any dirt or potential contaminants.

Can Baby Chicks Have Celery?

Yes, baby chicks can technically have celery, but only in very small quantities with supervision and once they are a few weeks old.

You should wait to introduce new foods until chicks are at least 6 weeks old to avoid digestive upset, and start with tiny pieces of celery.

Chicks are particularly vulnerable to crop impaction, and the stringiness of celery can cause problems for them.

If in doubt, just don’t feed celery to chicks. Besides, they’d probably like something much tastier!

"Hi! I'm Kendra. I'm a wife, mother, and homesteader. I love everything that has to do with simple living. I'm a canning instructor, an avid gardener, and a constant learner of old-fashioned skills. Here is where I share it all. Welcome to the adventure!"
Diatomaceous Earth for Chickens: What You Should know
So, Can Chickens Eat Thorns?
So, Can Chickens Eat Oats and Instant Oatmeal?
How and When to Help a Stuck Chick Hatch From Its Egg
So, Can Chickens Eat Hay and Haylage?