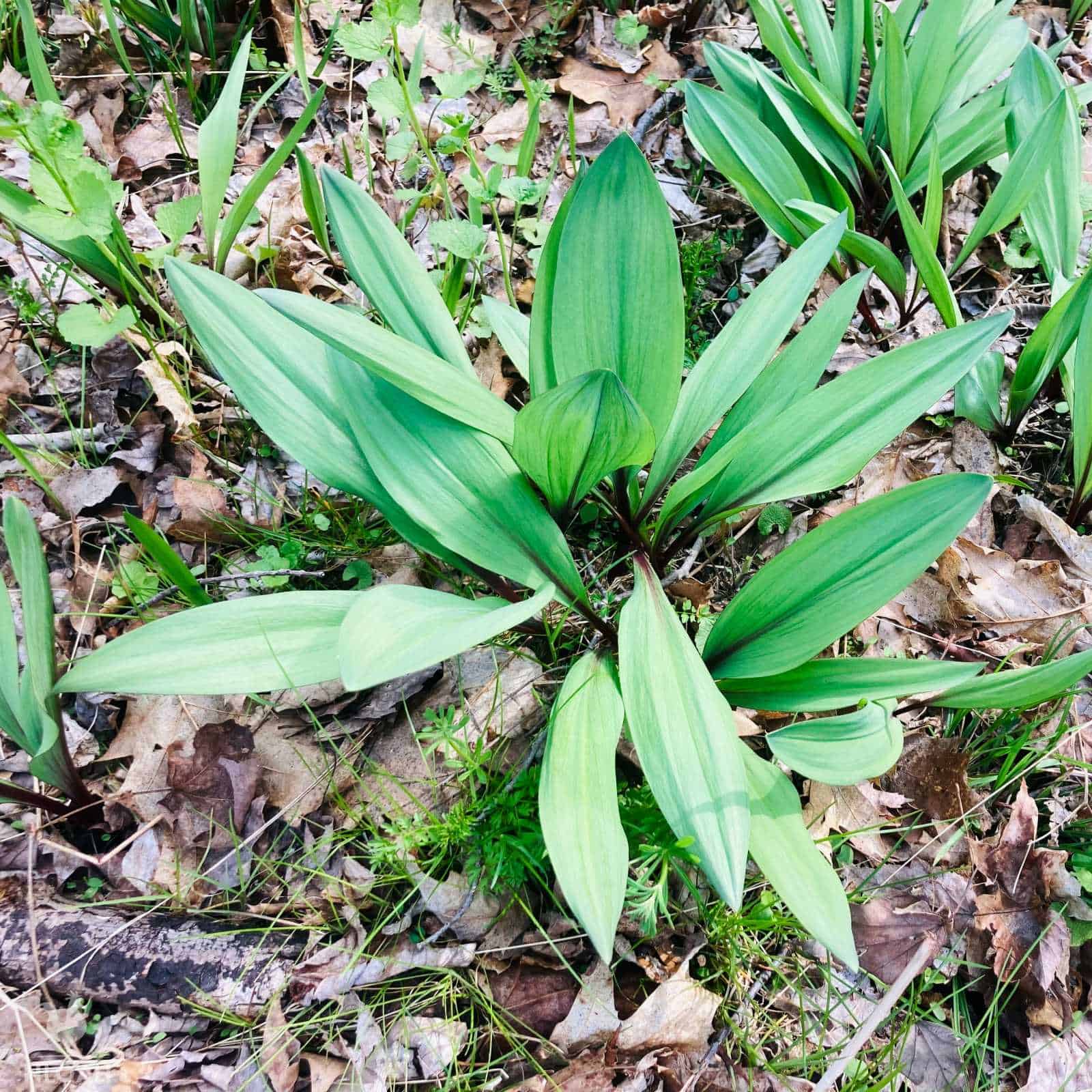 As we move into the upcoming spring season, the air is full with the scent of wet soil and blooming floors, and a new round of foraging begins. Even if you’re a novice forager, you should definitely know how to spot and harvest leeks.

If you live somewhere on the east coast or in parts of the midwestern United States, chances are you have a stand of leeks near your homestead ready to be sustainably harvested right now. Here is everything that you need to know about foraging for and preparing wild leeks.

Wild leeks, also known as ramps or ramsons, are one of the earliest plants in the spring season to sprout and greet us as a seasonal treat.

Festivals are held in honor of this spring perennial, which unfortunately has led to the increasing overharvesting of the easily identifiable wild leek, often due to tourism.

Since the first colonists arrived in what is now the United States, wild leeks have been a staple vegetable, native to the east coast of North America; it is not surprising that this tast and useful plant has since migrated to the midsection of the United States.

Their alternative names, ‘ramp’ and ‘ramson’, possibly originated from colonists who arrived from the British Isles. The term most likely stemmed from settlers trying to differentiate this new plant from a similar plant in their native countries.

Wild leeks, more commonly known as ramps, are ready to locate and harvest in the spring season.

Wild leeks can be located in the deciduous forests and floodplains on the east coast of North America, reaching from Georgia to mid-Canada, which are full of moist, rich soil, growing in small patches that spread over time.

Depending on your region on the east coast, ramps might begin to bloom in early April and will typically last until May, making the window for foraging short.

They often grow underneath the canopy of a variety of trees, including birch, beech, and sugar maple, and sometimes will grow underneath basswood, hickory, and oak trees, often growing on slopes facing the north.

You can often spot them glowing close to roads that cut through land sloping down to ponds or wetlands.

Ramps are not to be confused for scallions, which do have the onion-scent characteristic but do not have identifiable leaf length and shape.

Avoid foraging toxic lookalikes, such as Lily of the Valley (Latin: Convallaria majalis) and False hellebore (Latin: Veratrum genus), which both have broad leaves, similar to leek leaves.

Before cleaning off your harvest and returning home, make sure your clippings have the distinct garlic/onion scent before preparing and consuming. When in doubt, leave plants in the fields, or find an expert forager to help guide you until you’re comfortable enough to identify plants on your own.

Leeks are versatile vegetables and have been a popular, sought-after food source since the settlers first arived here, and people had to hunt and forage the woods to survive. Leeks have a mild onion taste, and can be eaten raw or cooked, and used in a variety of ways.

In their raw form, leeks are crunchy, and all parts of the plant are edible. The stalk, or fruit, of the plant, are softer in texture, while the leaves are coarser and denser in texture.

Before eating or cooking, wash your freshly harvest leeks, and remove any traces of sand, soil, and other traces of dirt. If there are roots on the ends, cut them off with a sharp knife, along with the leaves at the top.

You can store the roots for later, either used to make a stock, or to replant. With the leaves, sauté them to soften them before eating or cooking with.

Next, slice the white stalk down the side, leaving two long halves of the stalk, to expose the inside. For the sake of clearing out more particles of debris, submerge the stalk slices in a bowl of cold water and soak for about ten minutes, then rinse.

When foraging plants like leeks, be careful not to over-harvest, as with many natural growing herbs and edible plants, they are often over-picked and can negatively affect their environment.

When you have located a freshly grown batch of ramps, you may choose to put on gloves and use a gardening shovel to gently dig through the soil to reach the bulb.

The thicker the green stems, the bigger the flavorful bulbs! To ensure a sustainable harvest, cut the roots from each bulb and leave them in the soil, to prompt natural growth next harvest season.

The most sustainable way to harvest wild leeks, however, is to only trim one leaf from each plant and to leave the second leaf and bulb intact, as to cause the least amount of disturbance possible on the soil, plant, and plant patch.

Wild leeks can also lead you to them with their slight garlic or onion scent. They also come in two varieties: Tricoccum and Burdickii. Allium tricoccum are wild leeks that have wider leaves and red stems. Tricoccum’s wider leaves will appear in May and will blanket the nearby area.

Little white flowers with green buds in the center will appear in June, and last until August after the leaves have died off and harvesting season has ended.

Allium burdickii are wild leeks that have narrower leaves and white stems, as they are also referred to as ‘narrow-leaf’ or ‘white stem’ leeks.

The leaves are a lighter shade of green and are often smaller in all parts, including bulbs, stems, and the number of flower blooms. Wild leeks typically grow to be around eleven to seventeen inches tall.

Being packed full of antioxidants, plant compounds, and vitamins, wild leeks are low in calories as well, which can aid in weight loss, because they are also a good source of hydration (water) and soluble fiber.

These components promote the feeling of fullness, by preventing an increase in appetite, which helps you to eat less.

If leeks are an option you want to explore for weight loss, try brewing a leek stock or incorporating leeks into a light broth soup to stay hydrated, yet filling you up with the warm sensation of healthy vitamin-packed goodness.

Wild leeks are easy to incorporate into any diet and can be enjoyed in many recipes.

Before we jump into the recipes, it should be noted that leeks can easily take the place of any onion to give recipes a lighter onion/garlic taste, so keep this in mind when you come across other recipes in the world and want to test the boundaries of cooking.

Here are some recipes to try once you find that stand of leeks near you.

If you want to enjoy your leeks right now, you can also use them to make a delicious soup. Leek soup is one of the most popular ways to prepare this wild herb, and it makes a perfect complement to dinner with a baked ham, or one of the chickens you raise on your homestead.

Leeks may only be available in the spring, but that doesn’t mean you can’t enjoy them all year long. Pickling is one of the best ways to preserve the year’s worth of hard work and harvest foraging these wild herbs.

The mild, onion flavor of leeks, when mixed with the combination of select herbs and vinegar, blends beautifully into a sharp, flavorful experience when a jar is cracked open for the first time, later on.

For this preserved treat, you will need:

Place the leeks into a jar, or several jars (if you wish to divide the batch), and set aside. n a medium saucepan, add dry spices to the pan and roast on medium heat until they become fragrant.

Add water and vinegar, bring to a boil. Pour spiced liquid over leeks, filling enough to barely cover the leeks, and cover with lid.

Allow to cool until jars reach room temperature. Refrigerate for about a week, then ready for use. Add to salads, sides to dishes, or eat as a snack. If kept in the refrigerator, pickled leeks should keep for about a year.

Leeks as a Herbal Remedy

Beyond being a tasty meal or preserved food, leeks have long been used as a herbal remedy in the past as well. According to the Peterson Field Guide Medicinal Plants and Herbs, Native Americans ate leek leaves to help lessen the effects of colds, croups and as a spring tonic.

The warm juice of leek leaves and the bulbs were also used to deal with earache pain, too. Overall, the herb was used as a remedy in a similar way to garlic.

A modern take on using leeks as an herbal remedy is to combine their effects with the many positive health benefits of apple cider vinegar, and make a herb-packed fire cider. Since leeks also contain immuno-support compounds, it’s no question that they would taste great in this recipe.

Every ingredient in this recipe is meant to warm the body and kick start the immune system as a preventive measure, typically in the standard cold and flu seasons.

Here is everything you’ll need to make this unique spiced drink:

Except for the honey, place all ingredients into a 1-quart mason jar. Pour vinegar over ingredients slowly, making sure every bit is fully submerged. Before placing the lid on, use parchment paper or wax paper under the lid to prevent the vinegar from touching the metal, as to avoid rusting.

Make sure to squeeze as much liquid from ingredients wrapped in the cheesecloth with a spoon. Add honey to the cider, stirring well. Taste, and add more honey, if needed. Once the cider is ready, take 1-3 tablespoons daily for a boost in your immune response!

Leeks are great native plants for novice and experienced foragers alike. They are easy to identify and bountiful wherever they are found. They’re in season right now in most places, so get out there and find them while you can!

Like any other wild plant, make sure you harvest the sustainably, only take as much as you need, and leave enough for the stand of leeks to naturally replenish itself, so it is there for a long time.

If you’re a seasoned forager, take some time this spring to teach others about this plant and show them where it grows as well, so a new generation of foragers can appreciate and protect this resource.

Make sure you eat some leeks this spring, too! Hopefully you’ll get a chance to enjoy these recipes when you’re in good company, whether online or in person, and that the real or virtual gathering is made all the better with the addition of sustainably harvested wild leeks.

Whether you put them in salads, make a soup, or prepare some fire cider, try to take some time to appreciate the natural bounty the Earth provides for free this spring!

Print or Save this article as PDF
Tom Harkins

When Tom Harkins is not busy doing emergency repairs to his 200 year-old New England home, he tries to send all of his time gardening, home brewing, foraging, and taking care of his ever-growing flock of chickens, turkey and geese.

"Hi! I'm Kendra. I'm a wife, mother, and homesteader. I love everything that has to do with simple living. I'm a canning instructor, an avid gardener, and a constant learner of old-fashioned skills. Here is where I share it all. Welcome to the adventure!"
Horsetail: Foraging and Uses
How to Identify Chicory
Is Cattail Edible?
Foraging for and Using Milkweed
How to Identify Goldenrod (Plus Look-Alikes)