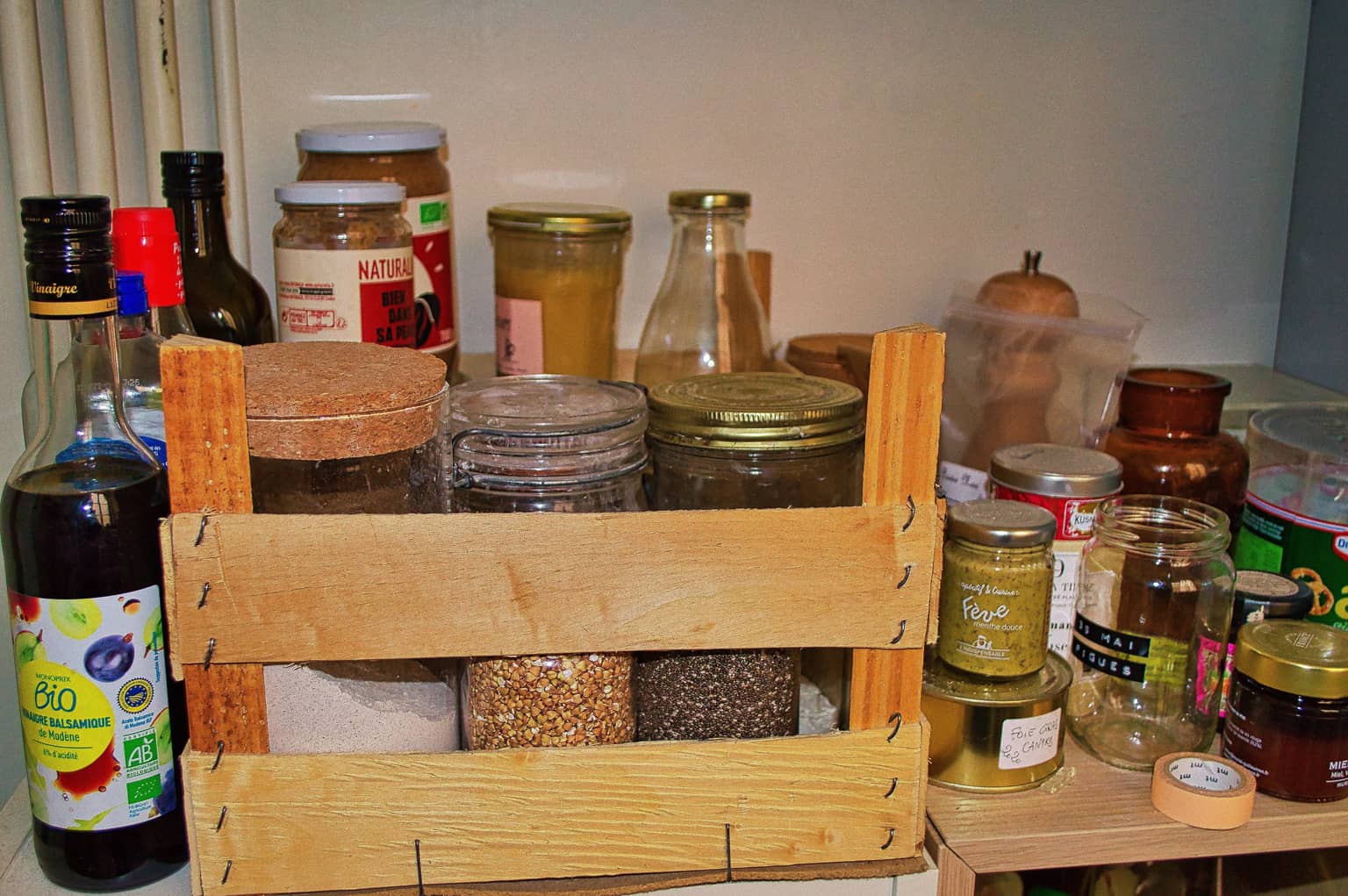 No matter how tidy a housekeeper you are, chances are that one day you opened the door or doors to your pantry only to be greeted with a decidedly unpleasant odor.

Maybe sickly, maybe tangy, or maybe just foul. It’s unusual, and definitely unwanted. All you care about now is getting rid of it. But why does your pantry smell so bad in the first place?

Nasty pantry odors likely originate from one of four probable causes: Spoiled food, pest activity, an infestation of mold or mildew, or a dead rat behind one of the walls or under the floor.

I’m sorry to say that no matter what is causing the odor, it is nothing good, and it is probably going to be a gross job to take care of it. There’s nothing to do but figure out what it is and then deal with it. We can help you do that, so keep reading.

Even though it is kind of gross, it might be relieved to learn that the most probable cause of a smelly pantry is due to the stuff that you keep in it. I’m referring, of course, to spoiled food.

This is particularly likely when you keep fresh produce, fruit or vegetables in your pantry, but packaged foods and other goods are not immune from nasty spoilage and subsequent odors.

Rotting food, whatever kind, has a distinct odor that should tip you off to the fact that you’ve probably left something sitting for too long in your pantry. Begin your search among the fresh produce, particularly vegetables or fruits that you have piled in baskets, bins and other containers.

They both have a way of hiding evidence until it is too late. Potatoes, turnips, radishes and other root vegetables are particularly likely offenders and can often start to stink quite badly in a short period of time after they have ruined.

However, even if you are only keeping jarred and canned food in your pantry, you aren’t out of the woods yet. Though any food that is sealed up tightly in its packaging is far less likely to emit noticeable odors, we cannot discount the idea that the seal has failed or popped.

Carefully inspect all of your canned and preserved food first, as these homemade methods of preservation are generally more likely to fail compared to factory produced foods.

Look for a greasy texture, obvious leakage, popped tops, or any other indicators that suggest the contents are compromised and probably festering away.

If you see any such signs of spoilage, I highly recommend you get rid of the entire container versus attempting to open the container to investigate; you might face a disgusting eruption that you won’t soon forget.

Also, if all of your home preserved goods prove to be in fine condition, continue looking at all of your other store-bought items.

Odd swelling, discoloration, or other peculiarities might tip you off that the contents have spoiled and that the rapidly multiplying bacteria within is about to burst its bounds. Once again, don’t risk opening it; just get rid of it!

Pantry pests are another highly likely source of bad odors once they set up shop and get out of control. Insects and rodents alike (I’m referring to small ones like mice and rats here) are the probable culprits.

Their bodies and their droppings both can contribute to a rank odor coming out of your pantry, particularly when they have been allowed to stay in there a long time.

Let’s start with rodents first. Rats and mice both disgustingly poop and pee pretty much all the time wherever they go and wherever they happen to be sitting or walking. This manifests as a sour, sharp, almost barnyard-like odor.

But you won’t just smell it, as you’ll be able to see it, too. Look along the walls, shelves and corners of your pantry for a noticeable, greasy track or trace.

This greasy smudge is a route that the mouse or rat uses often and is a combination of oils off of their fur and their own aforementioned droppings that they track all over the place.

Absolutely disgusting, and a likely vector of disease. You’ll be able to spot their droppings particularly easily as a brown or black turd that is anywhere from the size of a grain of rice to a bean.

Insects are another matter, and the sheer variety of species means you might have to investigate the various goods in your pantry to locate the source of the problem.

Particularly common pantry pest insects target dry goods like flour, rice, dry beans, grains and more. Particular species could be anything from weevils and other beetles to ants, mites, and more.

When insects take up residence in your pantry they won’t start eating on the food that they enjoy and then reproducing with others of their own kind, pooping and laying eggs and generally being ultra-disgusting on a tiny, tiny scale.

If you carefully inspect your food for damage you might notice small spots of discoloration, black or brown sand-sized particles of debris or live insects. Small, odd groupings of unusual objects could be their eggs.

Whatever the case, the greater the insect activity in a specific area the more you will notice the odor which is often described as musty, slightly metallic or tangy. Particularly with certain species of weevil people sometimes describe the smell as similar to old pennies.

If you discover an insect or rodent infestation and your pantry, you’ll need to throw out any compromised food, eliminate the pests and then thoroughly clean your pantry to get rid of the odor.

This is probably one cause of odor you are already familiar with. If you ever catch a familiar basement- or attic-like smell near your pantry, you’ve probably got mold, mildew, or maybe even fungus taking hold somewhere inside.

Your food is probably safe if it is sealed or otherwise packaged, but you’ll need to act quickly to nip this problem in the bud.

High humidity or a forgotten spill in the pantry will readily contribute to this problem, particularly in warm environments. As soon as you get a whiff of that distinctive odor, it is time for a thorough inspection.

Treat a spot of mold or mildew with the appropriate cleaner and a good, stiff brush to eliminate all traces. Do what you can to keep your pantry dry and well ventilated at all times, and you won’t have to worry about this issue very often going forward.

I saved this one for last because it is the worst of the worst. Chances are most of our readers have already dealt with this problem at some point in their lives, and know exactly what the smell is like. For those who have not, may you never learn.

The aforementioned mice are a constant problem in most homes because they can fit into the tiniest spaces and then run around freely behind your walls, above the ceiling and under the floors.

Mice, of course, want to go where the food is and that means they will seek out the pantry or any other food source using their sharp sense of smell. Sadly, or perhaps gladly, mice don’t live very long, and it is only a matter of time before one croaks behind the walls in your pantry.

After decomposition starts, you’ll notice an odd odor. A little sour, a little weird. Then it turns sickish and distinctly off-putting. Then it turns absolutely wretched, and after that it will drive you and everyone else who smells it plumb crazy.

I have some bad news: You can expect that smell to persist for at least a couple of weeks.

Most folks will not be able to endure this, especially when it is in such an important location as the kitchen. You’ll have only one choice, and that is to try and zero in on the source of the smell, cut open or otherwise access the wall or floor, and then remove the corpse of the mouse.

Get Rid of Pantry Odors

Whether from spoiled food, pest activity, mold and mildew, or a dead mouse, a smelly pantry is a problem. Perhaps the only good thing is that these odors don’t persist after you clean them up. Use what you have learned to track down a problematic odor in your pantry.

"Hi! I'm Kendra. I'm a wife, mother, and homesteader. I love everything that has to do with simple living. I'm a canning instructor, an avid gardener, and a constant learner of old-fashioned skills. Here is where I share it all. Welcome to the adventure!"
NutriMill Electric Grain Mill Review
10 Things Only Homestead Kids Will Know and Do
Homemade Pest Control - Quick and Easy
21 Kick-Ass Tips to Keep Your Homestead Organized
19 Uses for Epsom Salts in the Garden and Around the Homestead