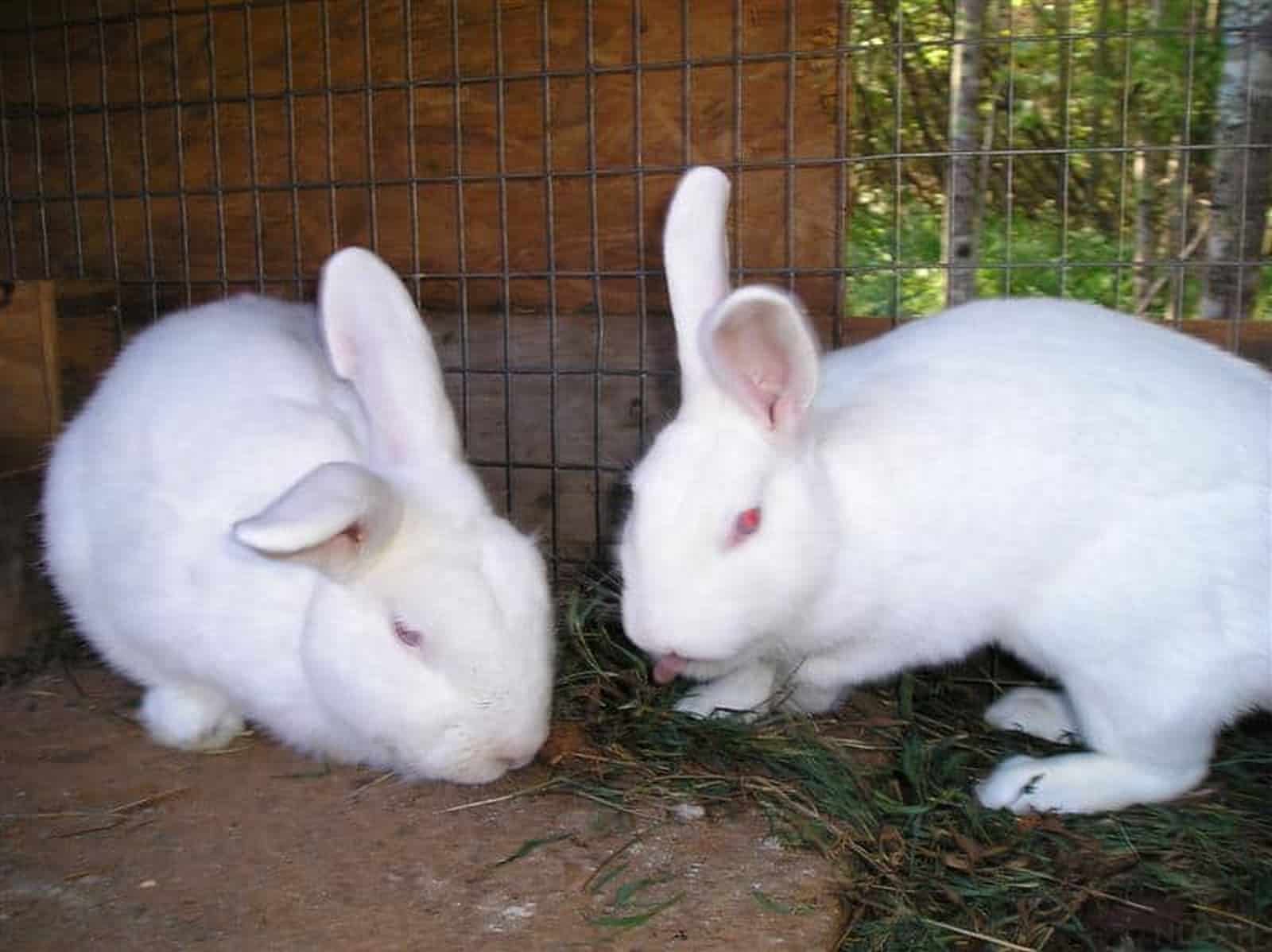 Rabbits have incredibly simple dietary needs. Most rabbits are, sadly, kept in hutches off the ground and never get the chance to touch grass when they are commercially raised.

Homesteaders can (and should) go an entirely different and more healthy route with their meat rabbits allowing the animals to feed far more naturally, and costing you nearly nothing to feed them.

If homesteading meat rabbits (or even pet rabbits) are kept in hutches with safe ground access similar to that provided by chicken runs, the animals can consume food stuffs more aligned with their natural diet, and vastly reducing or even eliminating the need to purchase rabbit feed pellets.

Rabbits are herbivores. In the wild, rabbits live on grasses, vegetables, succulents, and fruits they forage. If starving, rabbits will eat their own excrement in order to survive.

Replicating the natural diet of rabbits as much as possible can help keep them both healthy, and putting on weight in a reasonable time frame – avoiding the medical issues that can stem from becoming obese.

When rabbits are kept commercially or in off ground hutches, they are typically fed a high protein and starch hay, or similarly protein and fiber rich rabbit pellet feed. In the wild or in the type of captive habitat noted above, rabbits eat grasses, leafy garden greens, herbs, and fruits.

Most commercial rabbit feeds contain a 12% to 20% protein ratio.

Hay should be the base of a rabbit’s diet. There are many different types of livestock hay – each with its own set of nutrients pros and cons.

A grass hay such as Timothy hay, orchard grass, or meadow hay, contain less protein and calcium than a legume hay – but boast more fiber. Grass hay is a bit sweet, so livestock tend to favor it.

While grass hay is excellent to feed to meat rabbits, it should be viewed more as a supplement or a healthy treat, and not an overall nutrient-rich primary diet feed. Grass hay varieties typically contain an eight to 12% protein ration. This type of hay also boast a 34% fiber ratio.

A legume hay, like Alfalfa, is rich in protein. Feeding rabbits a legume hay as a primary food source will help the animals the energy they need to grow.

But, some rabbit keepers feel that solely feeding alfalfa hay or using it heavily on a long term basis, may cause kidney or urinary tract problems – possibly making it less suitable as a sole food source for breeding pairs.

But, legume hay is especially beneficial for nursing rabbit mommas and kits (baby rabbits) due to its high protein percentage. Legume hay has a 13% to 21% protein ration, and a 28% to 34% fiber content.

Types of hay in this category include oats, barley, and wheat. This grain cannot only be eaten by rabbits, but also used as bedding. Cereal grain hay is far softer than straw – but does cost more to purchase.

If you cannot grow your own cereal grain hay for the meat rabbits on your homestead, considering budgeting in this more expensive type of bedding only for pregnant and nursing does to give both them and their kits a soft space to bed down.

Providing rabbits healthy snacks and nutrient rich supplements can often be accomplished by growing your own rabbit colony treats, and giving the meat animals fresh scraps from your garden or kitchen.

Rabbits are incredibly sensitive to food with a high sugar content. When a rabbit consumes too much sugar, it can ferment inside the stomach and cause lower tract problems and bloody urine.

Because rabbits do not possess the ability to regurgitate their food, the fermenting sugary foods come out in their droppings, causing often severe or even deadly, diarrhea.

Strictly limit or eliminate entirely any sweet foods that are a part of your treat routine.

Do not ever feed the rabbits on your homestead any of the following treats. Each item on this list can make your rabbit sick, or could be fatal if ingested.

Foods that have a high percentage of carbohydrates should also be limited or avoided entirely. Carbohydrate rich foods are substantially hard for a rabbit to digest – and may cause fermentation inside the stomach just like foods with a high refined sugar ratio.

Although not toxic, it is best not to give or give as a very rare treat, the following: rice, human cereal, beans of any type, or corn.

Never give rabbits any commercially processed feed that is not designed specifically for them, such as dog or cat feed or sweet mix – all stock equine feed.

When a rabbit’s diet is primarily hay based and supplemented with items from the safe treats list, the animal has a better chance of remaining healthy and putting on weight in a reasonable time frame.

Growing food specifically for the rabbit near its pen or even inside the pen will help keep feed costs down.

"Hi! I'm Kendra. I'm a wife, mother, and homesteader. I love everything that has to do with simple living. I'm a canning instructor, an avid gardener, and a constant learner of old-fashioned skills. Here is where I share it all. Welcome to the adventure!"
Are Rabbits Actually Profitable To Raise?
So, Are Rabbit Scratches Dangerous?
So, Can Rabbits Eat Eggplant?