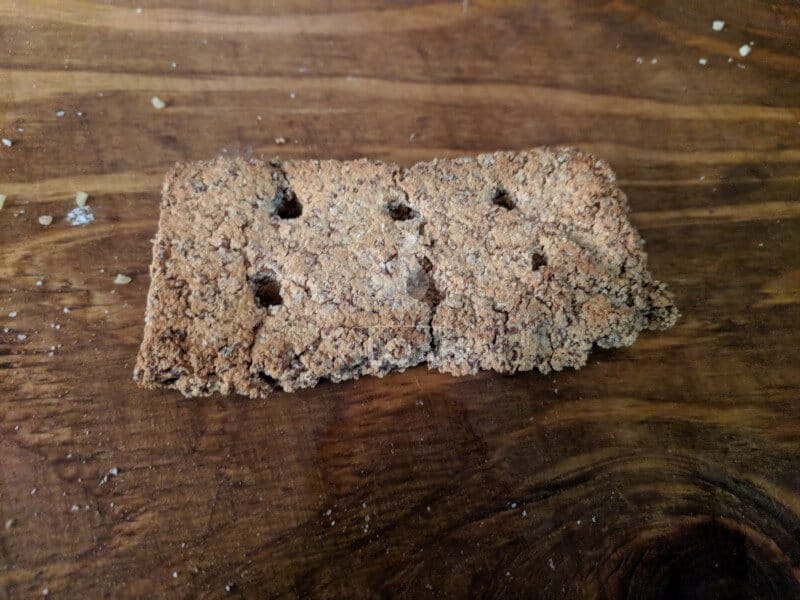 Doomsday crackers, or survival crackers, as they are sometimes called, were created during the Cold War era after extensive research by the federal government. These shelf stable crackers are somewhat like hardtack crackers on steroids.

Making and preserving your own crackers will provide a nutrient-rich and inexpensive food source that can be plucked from the shelf either during a disaster, for camping and hunting trips, or when money is tight on the homestead.

The doomsday crackers do not taste any more appetizing than hardtack crackers – unless you perhaps put some homemade blackberry jam on them. But, they are very shelf-stable, and if eaten four to a meal, contains about 700 calories and the nutrients needed to sustain the body.

If you live on nothing more than these crackers eaten four to a meal three times a day, you will lose weight and suffer from a lack of quality nutrients that stem from fruits, vegetables, and meat – but you will not starve to death.

During the 1950s the government, and most of the populace, were keenly worried about a nuclear attack by Russia. Shelters were being built in under backyards all across the country. School children were being taught to duck and cover beneath their desks if they heard the sirens blare.

Initially, the government engaged in its best efforts to turn every American into a survival homesteader. Alright, no politician from that era ever uttered such a label, but that is exactly the end result they were aiming for when launching the “Grandma’s Pantry” initiative and urging everyone to grow a backyard garden and learn how to preserve their own food.

The campaign included large and colorful displays in supermarkets across the country urging everyone to stock up on non-perishable and keep their pantries full – just like grandma always did to feed visiting loved ones.

The quaint cardboard cutouts of grandma and her pantry only did so much good. Much more needed to be done to ensure the masses would be fed if the Cold War suddenly became a real one.

Although the estimates of how long folks would need to remain in shelters after a nuclear attack were woefully too short, the federal government did grasp that survivors would need more than store bought canned food to stave off hunger.

They also grew to understand that folks running in a panic to the nearest shelter would not be able to pack much of the grandma’s pantry items with them. Even if they could, the fallout shelters would not be large enough for the survivors, their stockpile of canned goods, or a place to cook them.

A new plan was hatched.

It was a very scary time in American history. Scores of scientists and nutritionists worked nearly around the clock to come up with a recipe for the doomsday survival crackers. Once they finally found the right combination of ingredients, the federal government began working with the nation’s largest cereal manufacturers to secure contracts for their production. It was a mammoth undertaking to be sure.

Once the shelf stable crackers were flowing through industrial ovens at the cereal plants, the lightweight heavy duty version of hardtack was packaged and shipped out to all four corners of our republic.

Materials: The crackers will be slightly browned on top when they are done. Place the doomsday survival food in either a Mylar or a Ziploc bag and store in a cool dry place.

You could also put the crackers into a Mason jar, and use the canning jar attachment to a vacuum sealing machine to increase their longevity. When prepared and stored properly, the doomsday crackers should remain safe to eat for between 2 to 5 years.

Every once in a while, a case of Doomsday crackers turns up in a shelter or basement. Several folks got their 15 minutes of semi-fame by eating the crackers live in YouTube videos. It is strongly recommended that any old packets of the crackers that are found simply be pitched and not nibbled upon, even if the container is left untampered.

Since there thankfully was no nuclear war, we won’t ever know how long a person could survive eating only the doomsday crackers. The federal government also planned to supply a hard candy type supplement that contained additional nutrients the survival crackers could not provide.