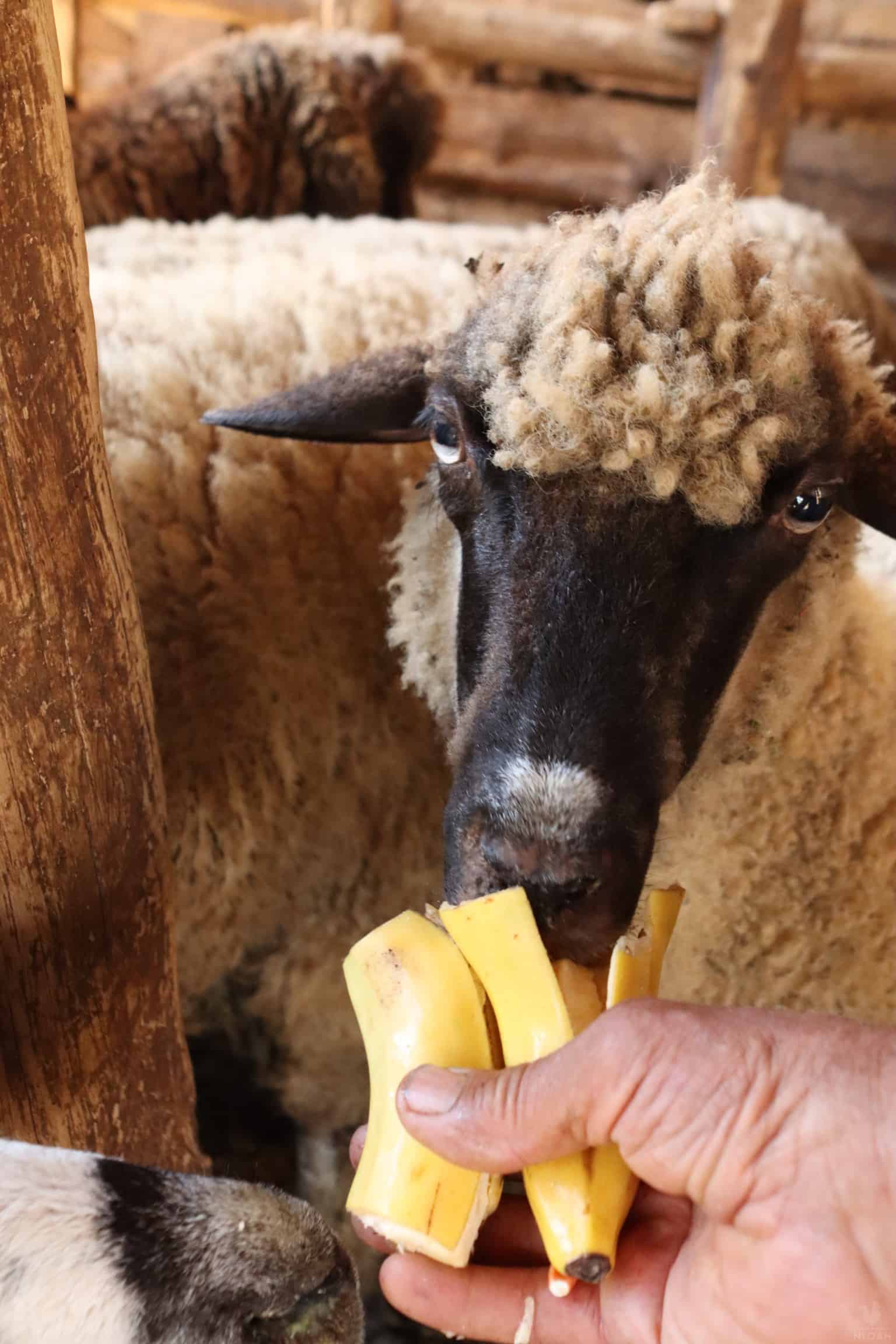 Sheep have very particular dietary requirements, which means that while we love being able to give them treats, we have to be super-duper careful about how we do it. Even a tiny amount of the wrong thing can lead to serious health problems.

Fruit is a common treat for sheep, and the softer the fruit the easier it is to eat. So, where do bananas come in? Are they safe for sheep to eat?

Yes, sheep can eat bananas – both the fruit and the peel. The fruit is high in fiber and packed with vitamin C and antioxidants, and vitamin B6 which improve digestion, boost the immune system and help the skin and veins.

Two of those stomachs process and ferment the food that’s eaten – turning it into cud. The cud is, of course, regurgitated and chewed again.

As gross as that sounds, it helps with digestion and increases the amount of nutrients absorbed while eating.

Sheep are herbivores and will eat almost any fruit or vegetable – with some exceptions – that they can get. They’ll graze for up to nine hours or more daily and usually on grasses, hay, and legumes.

Supplements like silage, stored feed, hay, crop byproducts, and fruits can also be added to their diets if/when needed.

The Nutritional Benefits of Giving your Sheep Bananas?

So, what are the benefits of treating your sheep to bananas? I’m glad you asked.

Bananas are rich in vitamin C and antioxidants which are great for improving/boosting the immune system.

They’re also high in fiber which helps with digestion and are packed with vitamin B6 which improves the function of the skin and veins.

Additionally, bananas are rich in iron, potassium, and copper all of which can benefit the animals.

Of course, they love peels. In fact, they’re known to run up to tourists in certain areas when they catch the scent of the fruit in their bags. They also like to wait for backpackers to drop a peel or two on the trail.

The Risks of Giving your Sheep Bananas/Banana Peels?

Bananas – or rather banana peels are often covered in pesticides which, unsurprisingly, can cause very serious problems if/when the sheep decides to munch on a banana peel.

Now, there are some pesticides that aren’t as problematic for the animals but unless you’re using one of those pesticides, it’s safer to just stick to the fruit.

Yep, being ruminant animals, free-ranging sheep will typically nibble at different plants – including the leaves – to see what they like. As long as you’ve cut the leaves into very small pieces, they should be fine to eat.

Well…yes, but it’s not a really good idea to feed them to lambs. For starters, they don’t have teeth yet, and can’t chew them. Obviously, if they can’t chew it, they can’t regurgitate and chew them again.

They need a lot of protein in their diets, so a better idea would be to focus on protein-filled meals with the banana being an occasional supplement.

I know this sounds weird, but I’ve seen this asked a few times and so I looked into it. It made sense that sheep could have a banana smoothie if they wanted.

Except that’s not the case, in fact, it’s quite the opposite. As nice as a smoothie is, it may be too sticky for the sheep’s body to accept and process.