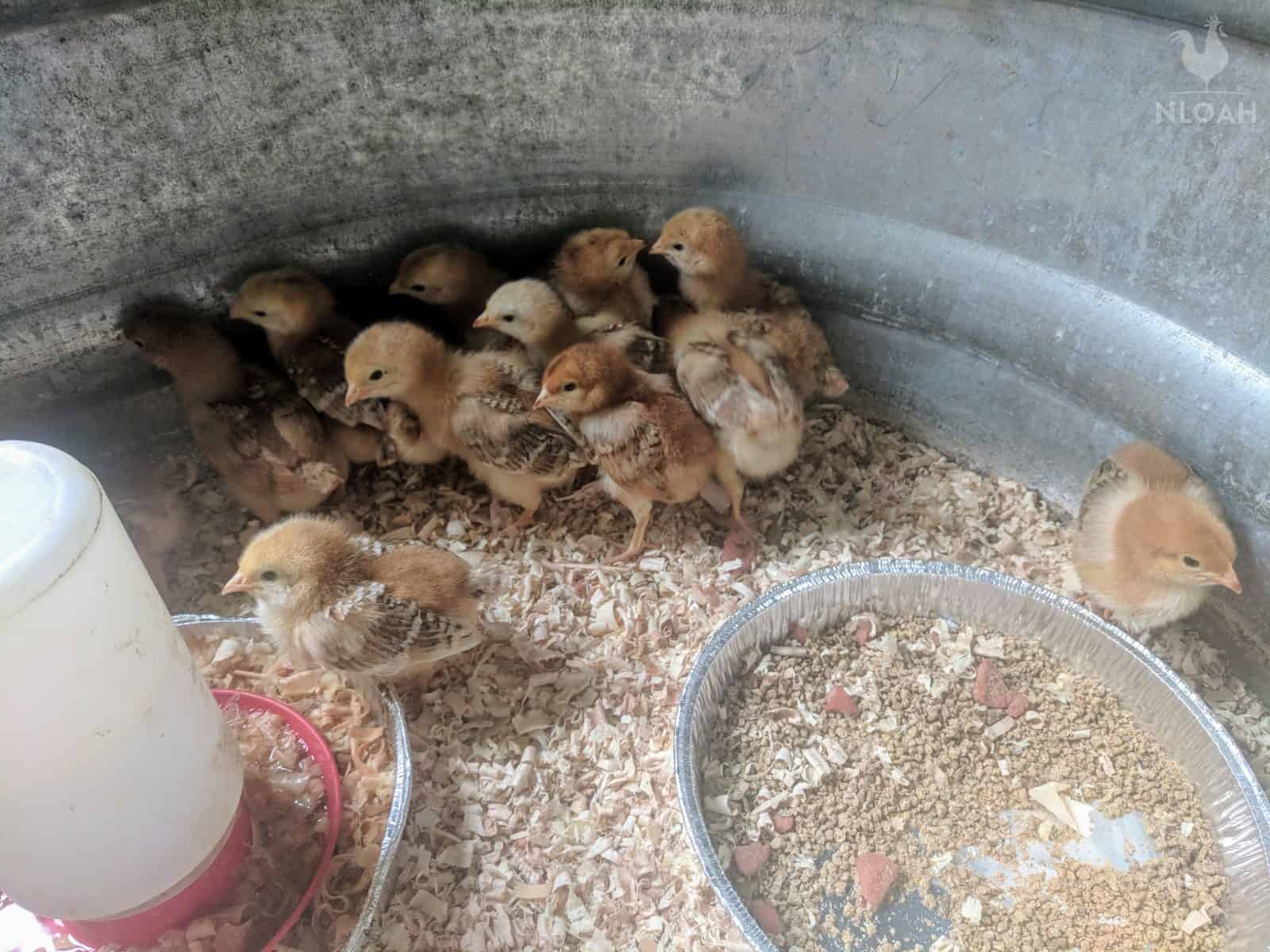 Getting new chicks – especially if it is your first time, is quite exciting. But, if you fail to set up the brooder and start the little flock members properly, tragedy can strike.

While there is no need to purchase an expensive commercially manufactured brooder, the habitat must conform to the basic needs of the chicks as well as not becoming a fire hazard that could destroy your garage or entire home.

Raising chicks to become pullets and then hens might not be rocket science, but agricultural science principles must be adhered to for the chicks to remain safe and healthy so they can one day produce eggs or meat to put on the table.

The overall success of your growing flock will depend nearly entirely on where and how they live during the first few weeks of life.

By following safe and proper brooder set up and chick management in a short number of months they will turn into productive hens and roosters meandering around in the chicken run, awaiting your daily arrival.

What Is a Brooder?

A brooder is simply a chick housing unit that provides heat, bedding, feed, water, and safety for the tiny birds. You can use cardboard boxes, plastic storage tubs, metal livestock tubs, or even plastic baby pools as a brooder.

We made our brooders out of wood and hardware cloth from scrap materials we already had around the homestead.

Commercially manufactured brooders can be purchased from agriculture store supplies like Tractor Supply, Rural King, or on Amazon.

If you are handy with tools it is possible to make a brooder like the one showcased in the video below in roughly one hour:

If tools are not your thing or you simply got overly excited when Chick Days rolled around and need a place to put all those chicks you just bought ASAP, the one in the video below took only five minutes to build.

The savvy chicken keeper had an eye towards safety too, and used a chicken plate as a heat source and not a brooder heat lamp – which would have likely started a fire hovering above a plastic brooder.

I have always kept chicks and ducklings in the same brooder without issue, but I strongly recommend against keeping young guineas with any other bird, or keeping poults with chicks, guineas, or ducklings no matter their age or size.

Poults tend to be food aggressive, and use their size to prevent other birds from eating and hurt them via tramplings. Once guineas are close to a month old, they can safely be placed with new chicks, in my personal experience.

Young poultry birds in a brooder will require both heated and cooling (but not cold) areas to remain healthy, and to help prevent respiratory illnesses.

In the photo below you will notice the heat lamp that shines on only one section of the brooder.

Although it is difficult to tell in the photo, a red heat lamp bulb is being used. I strongly recommend always using red and not white heat lamp lightbulbs.

A red heat lamp bulb casts a tinted shade of color into the brooder which greatly helps hide the bloody little spots on a chick it has acquired from pecking at its feathers, or from another type of injury.

Poultry birds are meat eaters, and they WILL attack at the sight of blood a vast majority of the time.

Red heat lamp bulbs also don’t mess up the sleeping pattern of the birds. A bright white heat lamp bulb left on all night will make it difficult for the chicks, ducklings, guineas, or poults to sleep.

If you are keeping the young birds inside your house or in an attached garage, trust me, you will want all of that chirping to stop at night.

Heat lamps have been notorious for starting fires inside of brooders.

A lamp that is pointed at bedding or the clamp that attached it to the brooder is hit only slightly and has its angle adjusted enough to shine directly onto bedding, will ultimately dry out the bedding enough for it to spark flames.

For a safer option to provide hat to brooders you could purchase a heat pad, coop heater, or heating plate to provide warmth to the little poultry birds.

Chicks need bedding to help keep them warm and comfortable – and also to help keep their brooder clean. The bedding should be changed out and replaced with fresh clean bedding about every three days.

The best types of bedding for chicks, ducklings, poults, and guineas include:

While using a cardboard base in the brooder or under bedding is fine, do not use cardboard alone. The droppings will sink through it, and cause bacteria to grow and it will become slick over time.

Poultry birds that have only cardboard, hardware cloth, or chicken wire beneath their feet often develop “spraddle legs” that will cause them pain when walking or standing their entire lives.

An open bowl feeder like the one below can work just fine, but it does have its drawbacks. The chicks can – and will, climb into the bowl to eat:

Chicks, as all poultry birds, are not very considerate about where they leave their droppings.

If you are not quick enough to scoop out the feces before it sinks into the feed or is tracks around by the feet of a chick, bacteria will contaminate the feed and can cause illness of death to the chicks that consume it.

This style of chick feeder offers more protection against contamination by droppings. But, the chicks can – and again will, climb on top of the feeder and use it like a perch … letting droppings fly where they may.

Some breeds of chicks and guineas are small enough that they can climb inside of this type of feeder, allowing droppings to be left and debris from their little feet to also contaminate their feed.

When feeding a healthy snack to the chicks, always place it outside of the feeder so any remains of the snack are not left to decompose in the feed, and can be scooped out of the brooder quickly.

The type of chick feeder we use now closely resembles the waterer in the screen right top corner of the photo below.

The bottle pieces are the same, but the openings in the bottom are wide enough to allow food, and not just liquid, to spill out into the shallow and narrow tray.

This type of feeding setup vastly deters chicks from getting on or into their feeder. While it does not prevent droppings from ever touching the food entirely, it is about as close as you are going to get.

Whether or not to use a medicated chick starter is a personal choice by the keeper. I prefer to feed all of the livestock on our homestead as naturally as possible – which includes free ranging of the poultry flocks, equine, goats, and other animals.

I personally never use medicated chick starter and instead use herbs, dehydrated foraged materials to provide extra nutrients that can help boost the immune system and have antibacterial, antifungal, and antimicrobial properties.

If the chicks you purchased were vaccinated against coccidiosis (the number one chick killer) at the nursery or by their breeder, the primary selling point for medicated chick feed has really been negated.

Still, as I said, some folks swear by medicated chick starter – I just happen not to be one of them.

To help stave of coccidiosis (which I have done successfully on the last 30 or so chicks we either hatched or purchased) I feed the little flock oregano, cinnamon, and basil on a daily basis – along with a sprinkling of diatomaceous earth on their non-GMO chick starter crumble.

Chick grit is often the most recommended supplement for the little birds. I have used it and not used it, without any noticeable difference.

Adding crushed dried insects to the feed will give the chicks a protein boost that may also be beneficial from both a nutrient standpoint and from a growth perspective:

Stay away from giving any healthy treats to the brooder inhabitants until they are at least two weeks old. Like babies, their digestive systems need time to acclimate to eating a single type of food to prevent stomach upset and scours – the livestock version of diarrhea.

Pay attention to how the chicks are acting inside of the brooder. Yes, a pecking order will develop from day one, but if you notice a chick often or constantly by itself, especially with its head hanging down, it may be ill.

Always remove a sick or possibly sick chick from the brooder immediately, and quarantine it to prevent the spread of contagious infections – like coccidiosis.

If you remove a chick from the brooder, pitch the bedding as well as clean and disinfect the waterer, the feeder, and surfaces it may have touched.

Give the chicks something to peck on other than each other by placing a log, dangling twine, or other safe to romp on or around item inside of the brooder.

Chicks can jump and will probably learn to fly quicker than you think. Keep those handy dandy facts in mind when placing “toys” inside of the brooder.

Unless the brooder walls are two feet tall, you will likely need to place chicken wire or a similar type of barrier over the top, and affix it temporarily or permanently in some manner (if the brooder is wood with a door) to prevent the chicks from getting our or curious little ones and pets from getting in.

Start developing rapport with the chicks early by carefully handling them, talking to them, and hand feeding them healthy treats (like the calcium rich crushed eggs shells shown in the photo above) as soon as they are old enough.

Even if they are destined to become meat birds, you want them to run towards and not away from you if they’re sick, injured, or stuck somewhere they do not belong when free ranging.

I recommend picking each bird up from the brooder daily for a quick health check. This will allow you to detect early on if they have “pasty butt” so the packed feces can easily be removed with a damp paper towel, and not cause a potentially deadly vent blockage.

If you have trouble telling one bird from the other, purchase some plastic no-pain leg clip tags that have an easy to read number on each side, or are color coated.