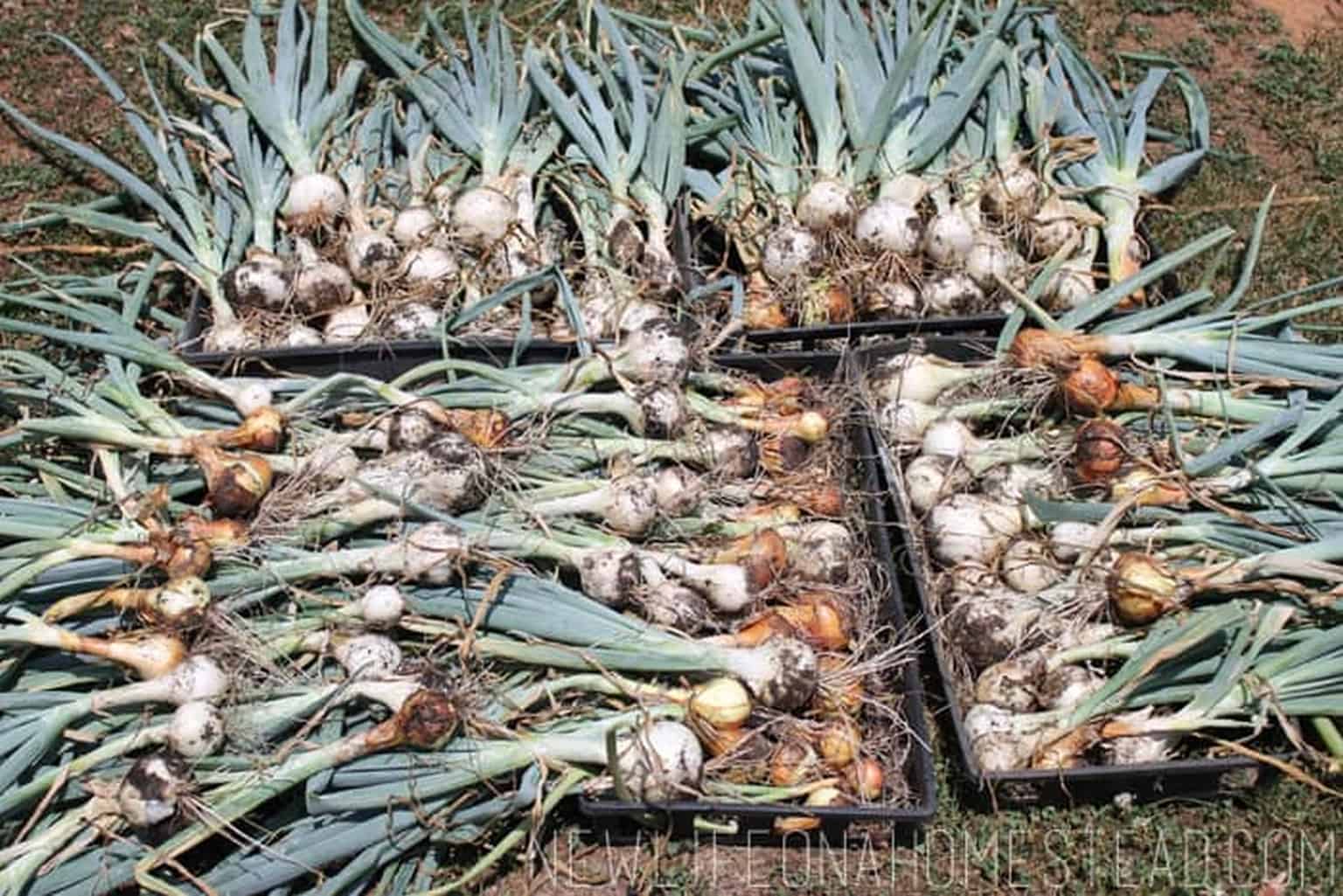 Preserving onions is not usually high on the top of a homesteading garden “to do” list simply because they keep so long with extra effort and processing.

When bushel after bushel of tomatoes, peppers, green beans, and other garden staples must be canned or dehydrated, onions often get lost in the shuffle… and ultimately go to waste.

While onions do keep well simply in a bin or refrigerator, they can be just as easily preserved as the rest of the harvest yield so they last for months to years until they’re needed for use in the kitchen.

Preserving your onion harvest is definitely worth the small amount of time and effort it takes to complete this post-gardening task.

Onions are commonly classified into two types: mild and pungent.

While mild onions are juicy, large, and easy to peel, they are generally not good keepers. These are the type of onions most often tossed onto a cheeseburger or used to cook in soups and casseroles.

The quality of mild onions, even when properly preserved, often begins to diminish after a few months.

The best way to save and use mild onions for the long term is to turn them into pickles, chutneys, salsa, and to caramelize them. Properly canned salsa will usually still be delicious up to at least two years.

Pungent onions possess thinner rings and are almost always smaller in size than mild onions. Not surprisingly, it is the pungent onion varieties that tend to cause the most eye stinging and tears when cutting them.

It is the sulfurous compounds inside of onions that cause the eyes to swell up with tears. The more pungent the onion, the shorter its likely preservation period.

Can You Preserve Store-Bought Onions?

Yes, if you need to supplement the onion harvest so you have a large enough batch to preserve you can use any type of onion from the supermarket.

Store bought onions have already been cured, and have a tougher skin than the ones picked fresh from the garden.

When the onions are cured excess moisture evaporates and helps to prolong the preservation process.

Store sliced onions in the refrigerator inside of a container, or a Ziploc bag. Never store whole or unpeeled onions of any type in the fridge because they will absorb far too much moisture.

Once onions absorb moisture they spoil a lot quicker, and turn mushy. Onions can keep in the refrigerator for typically two weeks to 18 days.

Storing whole unpeeled onions in a cellar or cellar type cool and dark environment will also help preserve them.

As long as the cellar type area (including a basement and unheated garages) is cool, dark, dry, and well-ventilated the onions should keep for approximately 8 months.

The cellar or similar style environment must stay at a steady temperature and above 32 degrees F (0 C) to avoid repeated freezing and thawing that can lead to mold and spoilage.

Wrap cleaned scallions in a paper towel that is slightly damp and help together with a rubber band or piece of twine. Put them in the crisper inside of the refrigerator, and they will keep for about two weeks.

Scallions and all other varieties of onion can be chopped into chunks and frozen in an airtight bag or container. When washed and frozen onions should keep for approximately one year in the freezer.

Any onions that are not used after coming out of the freezer can be re-bagged and placed in the refrigerator – they should last at least one week under refrigeration.

Pre-cooking onions so they are ready to use for a meal later in the week can be done without sacrificing quality or much longevity.

This traditional method of preserving a host of garden vegetables works quite well for onions, as well.

The pickling solution will thwart the growth of bacteria that causes food to go rancid. When pickled properly, onions can last a minimum of six months.

The onion pickling process is easy and inexpensive. Simply fill a glass Mason jar with ½ of a cup of apple cider vinegar, 1 thinly sliced onion (red onions are the most often pickled type but any onion will work) 1 cup of warm water, 1 and ½ teaspoon of salt, and 1 tablespoon of sugar.

Seal the jar so it is as airtight as possible, and allow the onions to soak up the brine and settle for at least 24 hours before eating or cooking with them. Store the pickled onions in a cool dark place to extend their shelf life.

Onions and other low acid foods must be pressure canned and not water bath canned to deter harmful bacteria and microorganisms that will turn them rancid.

Onions must be pressured canned at 240 degrees to kill the deadly botulism bacteria.

To pressure can approximately 20 pounds of onions it will take 20 minutes of prep time and roughly 40 minutes of processing time. The peeled and washed onions can be canned whole if they are not large.

When dealing with large onions, it is best to chunk or slice them. If the onions will be eaten like pickles, they are usually sliced into ½ thick rings.

Put the onion in a large cook pot (12 quart will be needed for 20 pounds) and cover them with water. Bring the onions to a boil over MEDIUM heat. Boil the onions for about five minutes, until they are translucent.

Remove the onions from the cook pot with a slotted spoon into the waiting sterilized Mason jars.

Pack the onions into the jars firmly – leaving only 1 inch headspace in each. Pour in the salt and the sugar before sealing the lid. Use the slotted spoon to release any air bubbles in the jars by pushing down onto the liquid.

Process jars filled with onions under 10 pounds of pressure for 40 minutes when using either quart or pint Mason jars. Remember to wait until the pressure gauge returns to zero and remains there for 10 minutes before removing the lid safely from the pressure canner.

Always refer to and follow all safe usage instructions on your pressure canner model before, after, and during use.

Learn how to can pickle onions here.

Dehydrating onions and storing them in vacuum sealed bags or Mason jars will keep them shelf stable for years – when stored in a cool, dry, and dark place.

Dehydrating (or drying) onions in a residential0grade dehydrating machine or in the oven will definitely make the room and plastic dehydrating trays quite stinky.

Chill the onion for about 10 minutes in the refrigerator to reduce the chances of them making your eyes water while cutting. Slice the onions as evenly as possible before dehydrating them so they dry both uniformly and thoroughly.

You can chunk or dice the peeled and washed onions as well – as long as they are uniformly separated. The drying process tends to take longer when the onions of chunked or diced instead of sliced into rings.

Place the onion parts onto the drying trays so that they do not touch. Dehydrate the onions on the 125 degree setting for approximately three to nine hours – until they are completely dry and snap when bent.

The onion scent will also linger on your dehydrating trays. To get rid of the smell, wash the trays in warm soapy water after pouring in a cap full or so of lemon juice into the dish water. It sometimes takes two washings to get rid of the onion smell from the tray.

To avoid the strong onion smell, you could dehydrate the onions outside in a solar dehydrator. The dried onion parts can be crushed into flakes and stored in a spice shaker.

To reconstitute dried onions, soak one part onions to two parts cold water in a bowl for 20 minutes.

Spread the fresh from the garden onions onto drying racks out of direct sunlight or even the floor of the garage on a day when it is a consistent 75 to 80 degrees F (23 C to ) and is not damp or humid.

The onions must be spread out in a single layer and so they do not touch at any part. Handle the onions carefully to avoid bruising them.

Allow the onions to air cure for up to two weeks – unless the weather does not cooperate. The onions should not be moved during the curing process.

As the onions cure the skins will tighten around the vegetable and both feel and look “papery.” During this process the necks will also start to wither.

Once the stems no longer contain any moisture and the necks are both dry and tight, use sharp scissors to trim the leafy portion of the onion down to within one inch of the bulb.

Once cured, store the onions in a bushel basket, cardboard box with some ventilation holes punched in it, mesh bag, or orchard rack.

If you want the onions to keep all winter, allow them to cure under proper weather conditions for four weeks. When stored in a dry, cool, and dark place the onions should remain safe to eat for 10 months to a year.

You can caramelize any varieties of onion, but yellow and red ones tend to turn out the best. Red caramelized onions are often used as both a pizza and salad topping.

The “fond” created as the onions cook in the skillet and release some of their sugar compounds and steam forms on the bottom of the skillet.

Folks sometimes think this means the onions are burning, but it is in fact the fond you want to create to essentially baste over the onions to caramelize them.

The fond is a glaze that dissolves when just a small amount of liquid is mixed with them. The steam generated from the frying onions creates the liquid you need when caramelizing.

Simply keep gently scraping and pouring the fond over the onions as they become dry and caramelized.

Another recipe for caramelized onions can be found here.

So,which of these preservation methods have you tried? Share your tips and comments below, and don’t forget to pin this on Pinterest!