Jam cake is a classic American cake that I had never heard of until a few weeks ago. All of a sudden I heard jam cake referenced three times in one week and became intrigued enough to search out both its history and a recipe… my family is so glad that I did.

Jam cake is made similar to spice cake, but has blackberry jam infused throughout, and features either a caramel icing or a buttermilk cream icing. This Kentucky and Tennessee cake dates back at least as far as the end of the Civil War.

As the story goes, soldier Joe Kellett crawled away from the battlefield after becoming badly wounded. He hid in a bush to avoid being killed since he could no longer defend himself. Kellett ultimately crawled his way along the edge of the woods until he reached a nearby farm.

The family took Joe Kellett in and tended to his wounds. While convalescing from his battlefield wounds the young soldier fell in love with the farmer’s daughter, Amanda. He promised to return and claim Amanda’s hand in marriage once the Civil War ended.

Joe and Amanda Kellett married and raised a family of seven children while running a boarding house. Amanda, who was affectionately referred to as “Granny Kellett” by most everyone during her latter years, served a delicious jam cake to her guests at meal times.

Word of the delicious country favorite spread far and wide over the years, helping to forever solidify this sweet and yummy cake a spot on the Sunday supper table across the South. Many folks in Kentucky and Tennessee think Christmas just simply would not be Christmas without the tantalizing smell of a jam cake wafting out of the oven.

Once I decided I was going to make a jam cake, I started searching online for recipes. The lovely stories submitted on recipe websites about the cherished family recipe being passed down through generations, were heartwarming.

Even though there are numerous jam cake recipe postings online, there really are not many different variations of this classic cake. Some folks prefer using pecans to walnuts, but that seems to have been prompted by what their great great grandmothers could locally source when making the cake in centuries past. Raisins are sometimes a part of the recipe, but again, the use of the ingredient varies by region.

After printing off what seemed to be a solid representation of an original Civil War era jam cake, I decided to check with my mother before actually heading to the grocery store. After she retired, she began compiling her own cookbook that had all of our family favorites, passed down recipes, and ones shared by friends and coworkers over the course of her life.

I was not surprised to learn she had a jam cake recipe from her old friend Barb, who move a little ways South after falling in love with a Kentucky boy named Billie Ray.

I had never made a cake from scratch before, but was able to pull off a perfect jam cake. Alright, the taste was perfect but I had some trouble with flipping around the cake pieces from the pan to the cooling racks. But, no one who tasted the cake seemed to mind the slightly uneven or missing parts of the otherwise perfect cake.

While the cake turned out perfect, the from scratch icing noted in Barb Wilkinson’s recipe failed miserably. Purely human error on my part, I am sure.

I am including both Barb’s jam cake icing recipe and the icing recipe I ended up using (after scrubbing out the scorched buttermilk from my pot) from an online jam cake recipe.

This is how the icing recipe looked at first, before it quickly went downhill. I believe my candy thermometer was broken. It would not go above 200 degrees, so I kept the icing on the heat and stirring constantly waiting for it to reach the needed 238 degrees…which it never did.

Using a working candy thermometer and having enough patience to bring the mixture to a boil on medium heat will make all the difference when making jam cake (or any cake) icing. 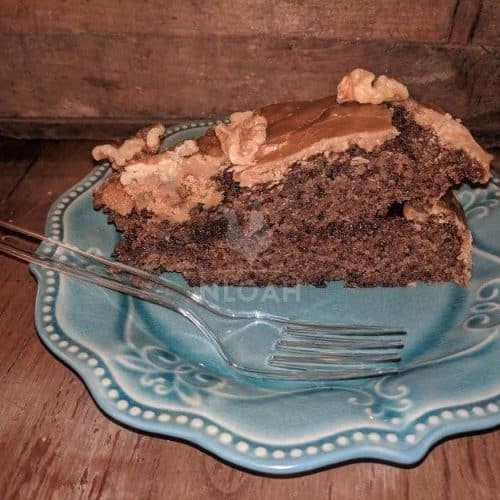 Do you have a jam cake recipe variation or a family story about this Civil War era dessert favorite to share? Please post it in the comments section below so the rest of the New Life On A Homestead community can enjoy it, as well.

Oh, and feel free to pin this on Pinterest board to try it out later!